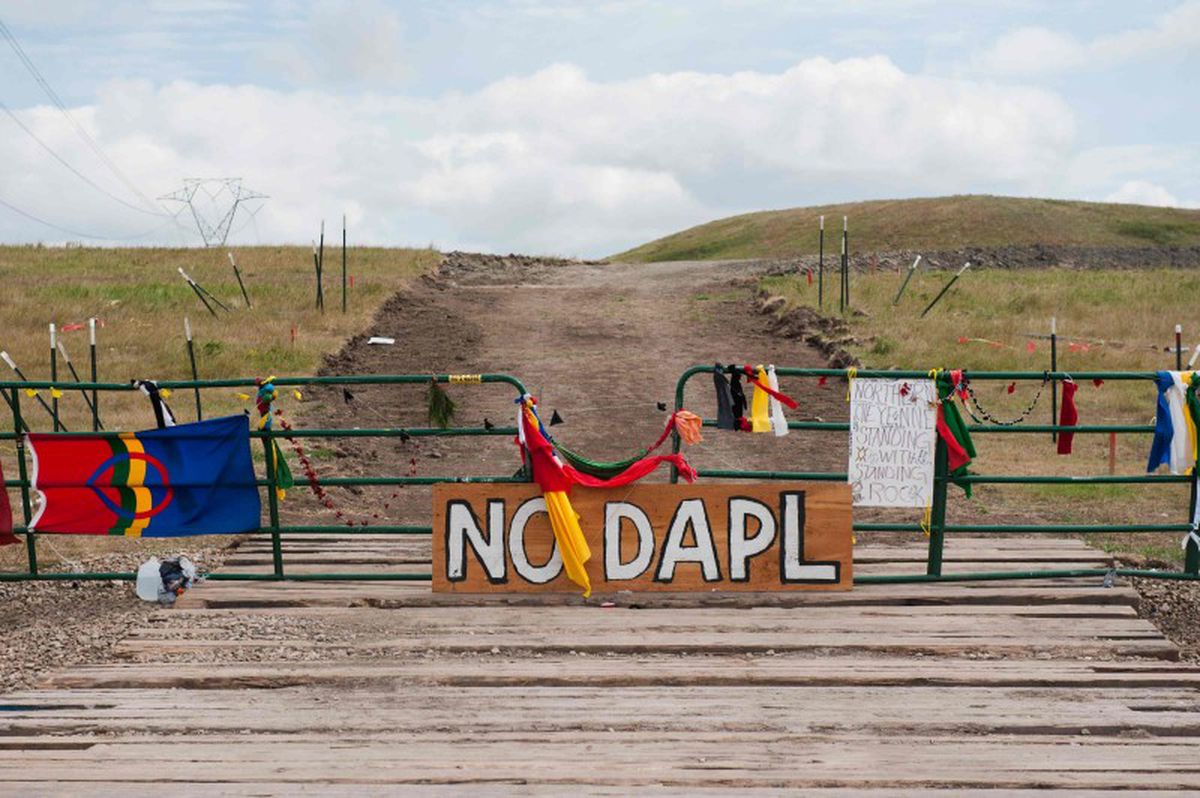 Signs left by protesters demonstrating against the Energy Transfer Partners Dakota Access oil pipeline sit at the gate of a construction access road where construction has been stopped for several weeks due to the protests near the Standing Rock Sioux reservation in Cannon Ball, North Dakota, on Sept. 6, 2016. (Andrew Cullen / Reuters)

Signs left by protesters demonstrating against the Energy Transfer Partners Dakota Access oil pipeline sit at the gate of a construction access road where construction has been stopped for several weeks due to the protests near the Standing Rock Sioux reservation in Cannon Ball, North Dakota, on Sept. 6, 2016. (Andrew Cullen / Reuters)

CANNON BALL, N.D./WASHINGTON – A Native American tribe's efforts to halt construction of a crude oil pipeline in North Dakota have swelled into a movement, drawing international attention and the support of movie stars and social media, and making a major oil company blink.

While the tribe's lawyers work to persuade a federal judge to withdraw permits for the pipeline in a ruling expected on Friday, thousands of protesters gathered at campgrounds near Standing Rock Sioux Tribe lands.

"This is a new beginning, not just for our tribe, but for all tribes in this country," said Standing Rock Sioux spokesman Ron His Horse is Thunder, one of the leaders hoping for a rebirth of Native American activism beyond the pipeline battle.

Representatives of 200 tribes and environmentalists have set up camp in the rolling hills near the confluence of the Missouri and Cannon Ball rivers in sight of the proposed pipeline route.

They say the planned pipeline, near but not on tribal land, runs through a sacred burial ground and could leak, polluting nearby rivers and poisoning the tribe's water source.

The 1,100-mile, $3.7 billion Dakota Access pipeline would carry oil from just north of the tribe's land in North Dakota to Illinois, where it would hook up to an existing pipeline and route crude directly to refineries in the U.S. Gulf Coast.

Protesters have included actress Shailene Woodley and Green Party presidential candidate Jill Stein, who authorities say is part of a group under investigation for illegally spray-painting construction equipment at the site.

"Our indigenous people have been warning for 500 years that the destruction of Mother Earth is going to come back and it's going to harm us," said David Archambault, tribal chairman of the Standing Rock Sioux. "Now our voices are getting louder."

On Tuesday, U.S. Judge James Boasberg granted in part the tribe's request for a temporary restraining order to stop the project, and said he would decide by Friday whether to grant the larger challenge to the pipeline, which would require the U.S. Army Corps of Engineers to withdraw permits.

Protesters were disappointed that the judge did not shut down construction altogether, but savored a small win when the group of companies building the pipeline, led by Dallas-based Energy Transfer Partners through its Dakota Access subsidiary, agreed to stop some work until the final ruling.

The pipeline was fast-tracked by the U.S. Army Corps of Engineers earlier this year, but the project has been dogged by protests since April.

It was envisioned as a safer way to transport highly flammable oil extracted from the Bakken Shale formation in North Dakota, Montana and parts of Canada than on trains.

In June, a Union Pacific train carrying crude oil derailed and burst into flames in Oregon, forcing the evacuation of a school and the closure of a highway. In 2013, a runaway train in Canada crashed, killing 47 people and destroying buildings in the Quebec town of Lac-Megantic.

DIGGING IN FOR THE LONG HAUL

The Standing Rock Sioux Reservation is one of six reservations in the Dakotas that are all that remain of what was once the Great Sioux Reservation, which comprised all of South Dakota west of the Missouri River, including the Black Hills, which are considered sacred, according to the tribe's website.

The tribe has 15,000 members in the United States including as many as 8,000 in North and South Dakota. The reservation covers about 9,300 square miles.

At campsites dotted with white tepees and colorful tents, many people prepared for the long haul.

"People are ready to stay through winter," said Allyson Two Bears, who sits on the tribe's emergency response team.

Members of an Ojibwe tribe are helping to erect lodges capable of withstanding North Dakota cold, and people from as far away as London and South Korea have joined the protest, signing their names to a map at the campsite.

The tribe has also enlisted the help of online petition website Change.org, which helped it gather more than 250,000 signatures on a petition to stop the pipeline. Youth members of the tribe ages 6 to 25 ran a relay race from North Dakota to Washington, D.C., to deliver the petitions.

The protest and lawsuit by the Standing Rock Sioux are not the first efforts by Native American and environmental groups to stop or reroute planned pipelines through culturally or environmentally sensitive areas.

Aboriginal Canadian and Native American groups have opposed the Keystone XL Pipeline from Canada to Nebraska, along with other pipeline projects.

Republican presidential contender Donald Trump has said he would approve TransCanada Corp's Keystone XL pipeline proposal if elected, reversing a decision by the administration of President Barack Obama to block it over environmental concerns. TransCanada has sued the U.S government to reverse Obama's rejection of the pipeline.

The Standing Rock Sioux have hired a political campaign director to publicize their actions to stop the North Dakota pipeline.

"They've been making really good use of social media as part of this and that has actually changed the way Native American activism takes place," said Katherine Hayes, chair of American Indian Studies at the University of Minnesota in Minneapolis/St. Paul.

The Standing Rock Sioux sued in July. Last month, celebrity activists joined about 100 members of the tribe outside a Washington, D.C., courthouse where hearings were being held, while others demonstrated in North Dakota.

Over the weekend of Sept. 3, protesters broke through a wire fence in an attempt to chase bulldozers grading the land, confronting pipeline security staff and guard dogs in clashes that at times became violent.

Actress Susan Sarandon, who joined the Washington protest, said she was there to help publicize the tribe's cause.

"These kinds of things happen when people don't have a voice," Sarandon said, referring to the government's decision to fast-track the project. "We have to give them a voice."