One of the world's biggest diamond mines opens - in remote Canada 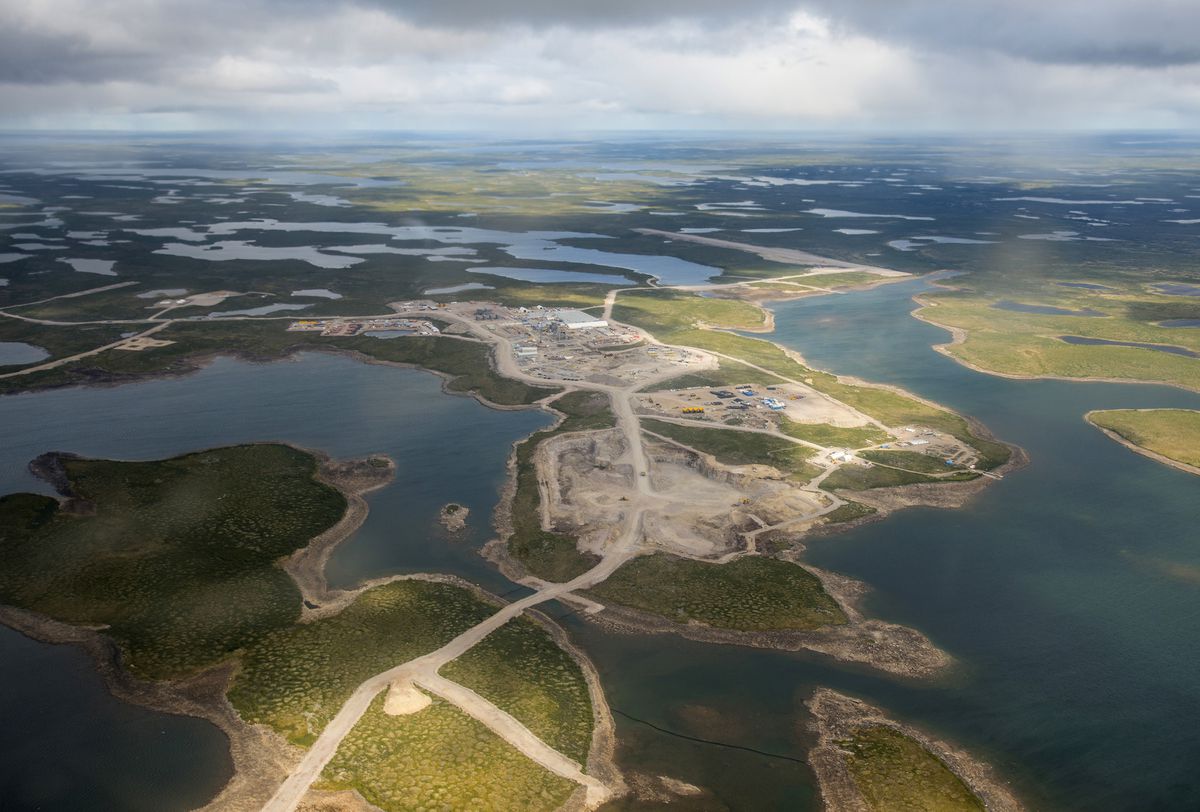 The Gahcho Kué mine. De Beers, the company whose name has been synonymous with the diamond trade since its founding in South Africa by Cecil Rhodes in the 1880s, is opening the world’s largest new diamond mine in a decade – in Canada’s Far North. (Courtesy of De Beers)

The Gahcho Kué mine. De Beers, the company whose name has been synonymous with the diamond trade since its founding in South Africa by Cecil Rhodes in the 1880s, is opening the world’s largest new diamond mine in a decade – in Canada’s Far North. (Courtesy of De Beers)

OTTAWA – De Beers, the company whose name has been synonymous with the diamond trade since its founding in South Africa by Cecil Rhodes in the 1880s, is opening the world's largest new diamond mine in a decade – in Canada's Far North.

The $1 billion Gahcho Kué mine becomes Canada's fifth operating diamond mine, reflecting the global search for new resources to replace mines in southern Africa that are being slowly depleted and to meet a desire among consumers for "clean diamonds" untainted by the wars and human rights abuses that have given the business a bad name.

"It's very difficult to find a very substantial new diamond mine," Bruce Cleaver, chief executive of De Beers, said in a telephone interview from Calgary, Alberta, where De Beers's Canadian subsidiary is based.

The Gahcho Kué deposit was discovered almost two decades ago, but development has been long and arduous in a site that is in the barren expanses of the Northwest Territories, 175 miles northeast of the territorial capital, Yellowknife. It is what is known as a fly-in, fly-out operation, with no permanent town and 530 workers who will commute from the south for shifts that last weeks at a time. Supplies such as fuel, heavy equipment and construction materials can be brought in only by truck on a 75-mile ice road that operates during winter.

The mine, in which De Beers is a 51 percent partner, is eventually expected to produce 4.6 million carats a year of rough diamonds. The bulk of De Beers' diamond output still comes from mines in Botswana, Namibia and South Africa, but the company likes the diversification that Canada brings. "It has a stable government and a stable fiscal regime," Cleaver says. Russia is another of the world's top diamond producers, but De Beers has no output there.

Cleaver agrees that consumers are "more and more interested in ethical sourcing" of diamonds, and he insists that De Beers provides buyers with a guarantee that all of its gems are produced in conformity with the highest standards.

That is particularly important in the U.S. market, which accounts for 45 percent of demand for the world's $79 billion jewelry market. China, the second-biggest market, has been shaky recently because of slower growth, accounting for weak diamond prices that Cleaver says are now stabilizing.

Offering consumers an ethical alternative to the "blood diamonds" that were seen as financing vicious warlords and insurgencies in Angola and Sierra Leone was the impetus behind the founding of Brilliant Earth, a San Francisco-based jewelry retailer that sells its products online and at outlets in San Francisco, Los Angeles and Boston.

"Consumers want a product that they can feel good about," said Beth Gerstein, co-CEO of Brilliant Earth. She says the jewelry the firm sells meets standards beyond those authenticated by the Kimberley Process, designed to exclude conflict diamonds from legitimate commerce. Gerstein says her diamonds also must be produced under the highest standards of labor and environmental regulations.

That is why Gerstein particularly likes gems sourced in Canada. A customer can go into a Brilliant Earth shop and ask for an engagement ring with a Canadian diamond from the Diavik or the Ekati mine, operated by De Beers' competitors in the Northwest Territories. "People can feel really good about buying Canadian diamonds," Gerstein said, noting that both mines have agreements with local aboriginal communities that include jobs for their members.

Despite its enthusiasm for Gahcho Kué, De Beers shies away from selling diamonds specifically identified as Canadian, preferring to say that all of its gems are ethically sourced. Ninety percent of De Beers' output from Gahcho Kué will be flown halfway around the world to Botswana for sorting and aggregating into packages of diamonds, a process that Cleaver says will offer a consistent choice of gems that are sold to diamond polishers.

Despite De Beers' enthusiasm for Canada, it hasn't been a completely smooth ride for the company's three mines here. The Snap Lake underground diamond mine, not far from Gahcho Kué, was shut in December because of operational problems. In its seven years of operation, Snap Lake never made a profit. Cleaver is confident that the open-pit Gahcho Kué facility, which he says will be "easier to mine," will be different.