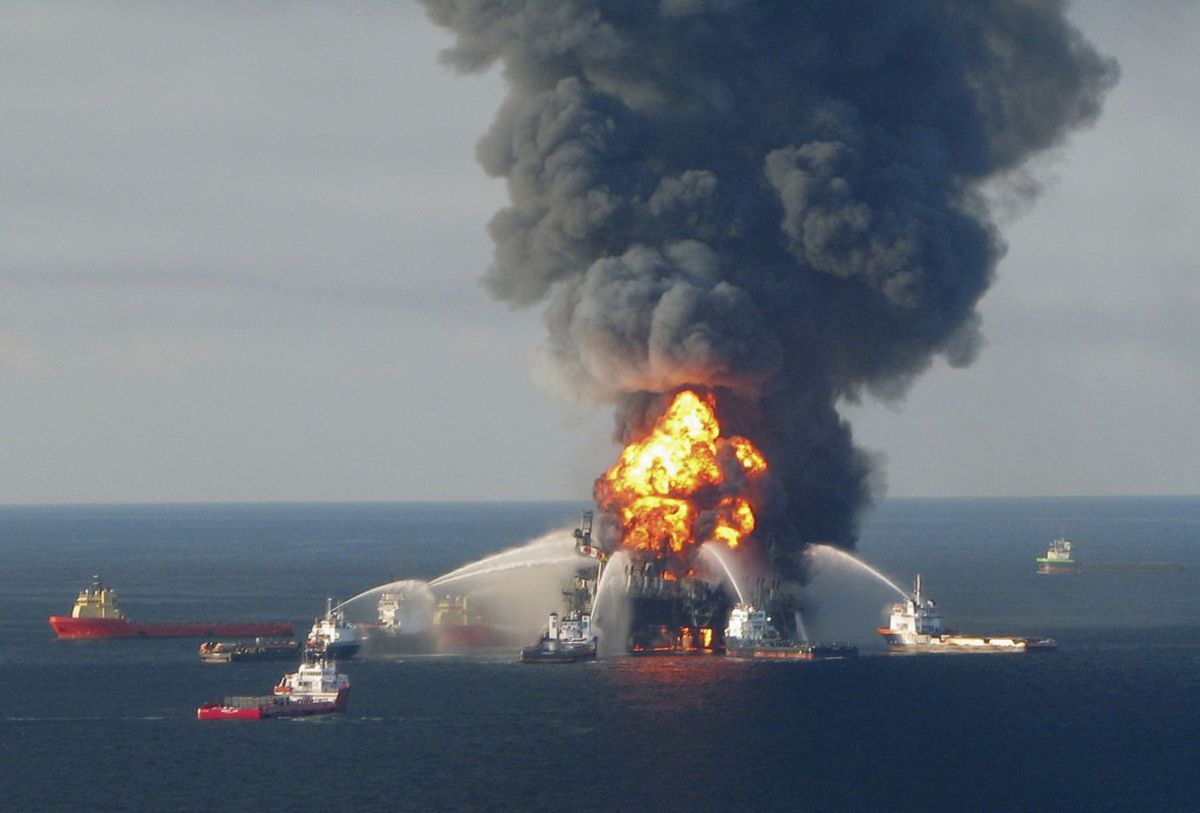 FILE — In a handout image from the U.S. Coast Guard, the Deepwater Horizon oil rig burns in the Gulf of Mexico on April 21, 2010. (U.S. Coast Guard via The New York Times)

FILE — In a handout image from the U.S. Coast Guard, the Deepwater Horizon oil rig burns in the Gulf of Mexico on April 21, 2010. (U.S. Coast Guard via The New York Times)

The 2010 Deepwater Horizon oil spill has been called one of the worst environmental disasters in American history — and more than six years later, scientists are still investigating how much damage it actually caused. Now, a new study suggests the spill may have permanently marred one of the Gulf shore's most important ecosystems.

The study, published Tuesday in the journal Scientific Reports, finds the oil spill caused widespread erosion in the salt marshes along the coasts of Louisiana, Alabama and Mississippi. And the researchers say there's a chance these marshes might never completely grow back.

Marshes "provide a variety of important services," said lead study author Brian Silliman , a marine conservation biologist at Duke University. "They benefit humans, including acting as pollution filters, absorbing nutrients as they run off from the land before they get into the estuary, helping to suppress harmful algal blooms. They also act as breakwaters and buffer the shoreline from erosion."

They're also important carbon sinks — in fact, research suggests that coastal wetlands may absorb several times more carbon per unit of area than tropical forests do. And they also provide habitat to a wide variety of animals that are staples of human fisheries, including shrimp, crabs and small fish.

So scientists have been concerned about how the marshes fared after the oil spill, believed to have affected at least 1,300 miles of shoreline from Texas to Florida.

For the new study, the researchers investigated the relationship between the amount of oil that ended up on marsh grasses following the spill and how much these marshes eroded in the years since. Specifically, they looked at the height of the grasses and how high on the stems oil was found at each location. They analyzed data taken from more than 100 sites in Louisiana, Alabama and Mississippi.

The researchers found that marshes with low or moderate levels of oiling did not erode any faster than usual. But in places where oil covered at least 90 percent of the plant stems, erosion rates accelerated significantly. The study suggested that erosion in these places was more than three times higher than in marshes with no oil at all, and on average was about 1.4 meters per year higher than normal. These elevated erosion rates persisted for up to two years following the spill.

The results suggest that marshes have a kind of threshold beyond which the effects of the oil begin to manifest themselves. And in the places that are hit the hardest, the effects can be significant.

"Identifying thresholds is something that ecologists and conservation biologists and policymakers are focused on in all ecosystems right now," Silliman said. "Understanding that breaking point can help them in restoration, conservation. We know some of these systems will be able to take some disturbance, but that threshold — that's where it can break down and the losses can be permanent."

And at some of the study sites, these changes may very well be irreversible, Silliman noted. Past a certain point of erosion, the edge of the marsh moves beyond the low-tide point, and it becomes difficult for the grasses to grow back.

Active restoration efforts — that is, physically restoring the sediments that were eroded away — could give the marshes a shot at returning. But otherwise, Silliman said, "the chance of natural recovery is very slim at best."

The study "documents one of the largest declines in an ecosystem following the Deepwater Horizon oil spill," Silliman said. But other research suggests that marsh grasses certainly aren't the only organisms that have suffered.

A report released by conservation organization Oceana earlier this year synthesized research pointing to a wide range of effects. Endangered sea turtles, bottlenose dolphins, coral reefs, shorebirds and all kinds of fish suffered increased mortality, developmental defects or reproductive declines as a result of exposure to the oil. And our understanding of these consequences may continue to grow, as there are still scientists conducting ongoing research on the changes along the Gulf shore.