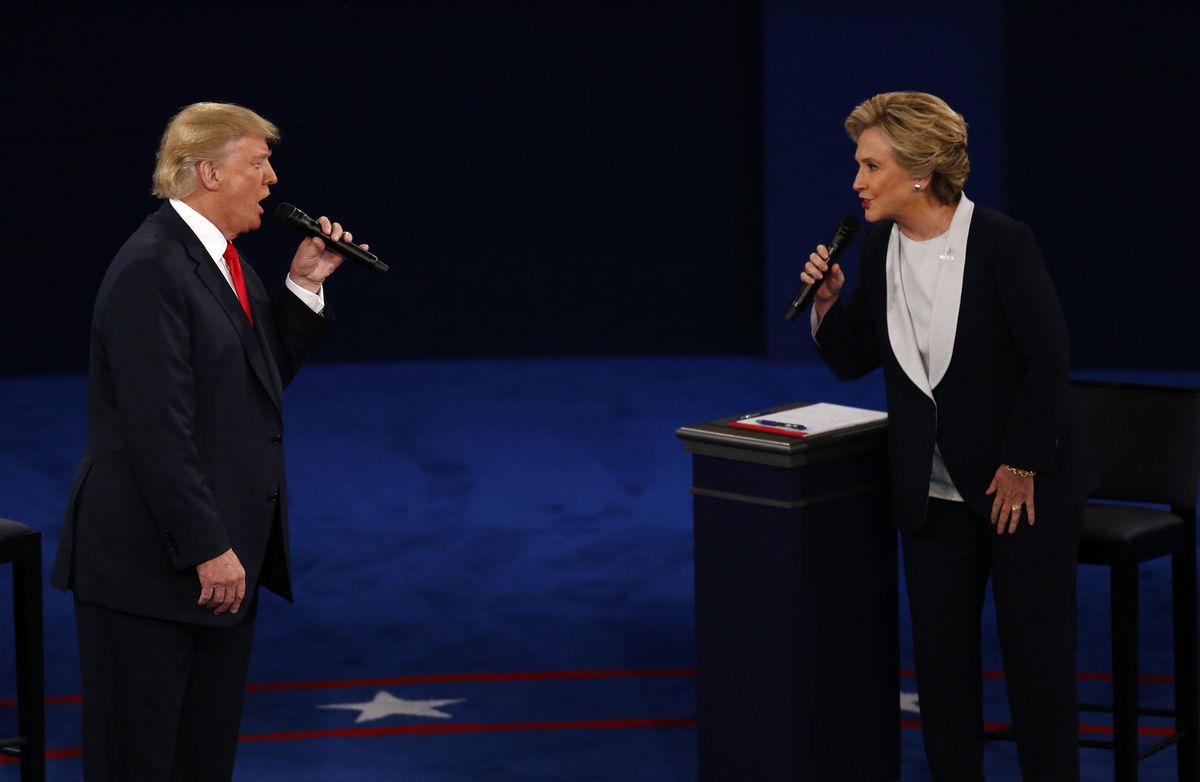 In a remarkable political maneuver, Trump charged that Clinton had smeared women who accused her husband, Bill Clinton, of sexually assaulting or harassing them, seeking to salvage his presidential candidacy after explosive reports about his past lewd comments about women.

Tense at first, and then increasingly angry as he grew more comfortable on the attack, Trump made the charges and noted that three of Bill Clinton's accusers were sitting in the audience.

Both candidates were visibly uneasy throughout the debate, even refusing to shake hands at the beginning, as the town hall event unfolded on a small stage in a highly charged atmosphere.

"Bill Clinton was abusive to women. Hillary Clinton attacked those same women — attacked them viciously," Trump said, arguing that the accusations against Bill Clinton were "far worse" than Trump's own remarks in 2005 that he could kiss and grope women because he was "a star."

Trump apologized for those comments but also repeatedly minimized them as "locker-room talk," and even tried to blame Hillary Clinton for raising them in light of Bill Clinton's behavior.

"She brings up words that I said 11 years ago — I think it's disgraceful, and she should be ashamed of herself, to tell you the truth," Trump said to scattered applause.

Clinton did not specifically rebut Trump's charges about her husband's behavior, saying only, "So much of what he just said is not right."

Instead, she broadened her indictment of Trump beyond the 2005 recording, assailing him for refusing to show contrition for his many inflammatory statements.

"He never apologizes to anybody for anything," Clinton said. She unfurled a litany of his provocations, including his mocking a Gold Star family, accusing a Hispanic judge of being biased by virtue of his ethnicity, ridiculing a reporter who has a disability, and falsely claiming that President Barack Obama was not born in America.

"Yes, this is who Donald Trump is," Clinton said about his 2005 remarks. "The question for us, the question our country must answer, is that this is not who we are."

After a tumultuous political weekend, the debate was watched extremely closely by Republican members of Congress, who are deciding whether to join dozens of elected Republican officials who have broken away from the party's nominee.

Trump's attacks on the Clintons — including a promise that, as president, he would appoint a special prosecutor to investigate Clinton's use of a private email server as secretary of state — were striking even in a presidential campaign that has often seemed like a race to the bottom because of Trump's no-holds-barred assaults on his rivals.

But no single answer by Trump seemed sufficient to put to rest the controversy over his 2005 remarks. As much as he apologized, he did not confess or reveal anything new about his treatment of women over the years. Nor did he say much to meet the goal set Saturday by his running mate, Gov. Mike Pence of Indiana: "Show what is in his heart."

Instead, Trump alternated between sounding chastened or defensive and trying to energize his base, which remains deeply hostile to Clinton.

He did so by blasting Clinton relentlessly over her State Department email practices and repeatedly interrupting her, barely concealing his contempt. He said again that Clinton should be "ashamed" of herself for deleting some of the personal emails she sent as secretary of state.

"Oh, you didn't delete them?" he said sarcastically. When she tried to answer, Trump again interjected. "What about the other 15,000?" he demanded.

Finally, Clinton, plainly exasperated, shot back: "OK, Donald. I know you're into big diversion tonight — anything to avoid talking about your campaign and the way it's exploding and the way Republicans are leaving you."

At several points, Trump expressed his frustration with the moderators, Anderson Cooper of CNN and Martha Raddatz of ABC, demanding that Cooper focus more on one of Clinton's biggest vulnerabilities, her email server.

[In second debate, Trump takes fight to moderators, too]

"Why aren't you bringing up the emails?" he asked, before flatly accusing the moderators of conspiring against him. "It's nice, one on three," he said.

Trump appeared more confident and aggressive than he had in the first debate, often dismissing Clinton's arguments out of hand and painting her as a politician "for 30 years" who had no record of accomplishment.

"It's just words, folks; it's just words," Trump said about Clinton's policy proposals. Forty-five minutes later, he added, "It's all talk and no action."

"Well, here we go again," Clinton said, arguing that Trump was misstating her record and getting his facts wrong. When Trump tried to interject, Cooper cut him off. "Please allow her to respond," he said. "She didn't interrupt you."

Trump made little if any effort to appeal to moderate voters, instead hurling a series of insults at Clinton. At one point, an audience member pressed him about whether he could be a "devoted president" for all Americans, and he said emphatically that he could be — without acknowledging that his comments over the past year have been extraordinarily divisive. Instead he attacked Clinton.

"She calls our people deplorable, a large group, and irredeemable," Trump said, invoking a comment that Clinton made last month disparaging what she said was half of Trump's supporters.

Clinton's response reflected a strategy of hers throughout the town hall-style debate: trying to engage directly with the undecided voters in the audience who asked some of the questions and showing her empathetic side.

"Mr. Carter," she said, naming the man who asked the question, "I have tried my entire life to do what I can to support children and families. You know, right out of law school I went to work for the Children's Defense Fund. And Donald talks a lot about, you know, the 30 years I've been in public service. I'm proud of that."

Trump, however, was far less concerned with connecting with the voters seated in front of him than with attacking Clinton in ways that would rally his voters behind him — and against the Republican officials who have been coming out against him.

"She's lied about a lot of things," Trump said, contending that Clinton's shift to opposing the Trans-Pacific Partnership trade deal was a falsehood. Moments later, he painted her in some of his most vicious language of the campaign.

In that moment and several others, Trump sought to bait Clinton into lashing out — just as she did to great effect during their first debate. But she kept her composure throughout, while Trump often seemed disgusted with Clinton and running at a high boil.

When Clinton said Russia was responsible for atrocities in Syria and mentioned Trump's praise for the Russian President Vladimir Putin, Trump replied bluntly that he did not know Putin. But then he came to Russia's defense by questioning whether it was responsible for the hack into the email servers of the Democratic National Committee.

"I know nothing about Russia," he said, momentarily pausing before adding: "I know about Russia."

Trump said he had "no loans with Russia," and veered into a digression about having "a great balance sheet," which allowed him to build a new Trump hotel at the Old Post Office on Pennsylvania Avenue in Washington.

And with Trump's running mate, Gov. Mike Pence of Indiana, weighing whether he wanted to remain on the ticket, Trump used a question about Pence's hard-line rhetoric on Russia at last week's vice-presidential debate to humiliate him.

"He and I haven't spoken and I disagree," Trump said, not hesitating to isolate his own running mate.

If Pence was bothered by Trump separating himself over Russia, or his assault on Hillary Clinton over her husband's infidelity, it was not enough to prompt him to abandon the ticket.

"Congrats to my running mate on a big debate win!" Pence wrote on Twitter, adding: "Proud to stand with you as we #MAGA," a reference to Trump's slogan, Make America Great Again.

The night unfolded in dramatic fashion. Shortly before the debate, Trump held a brief news conference in St. Louis with three women — Paula Jones, Juanita Broaddrick and Kathleen Willey — who allege that Bill Clinton sexually assaulted or harassed them during his years in office in Arkansas or as president. They were joined by a fourth woman, Kathy Shelton, who was 12 when she was raped by a 41-year-old in Arkansas; Hillary Clinton represented the man, who ultimately pleaded guilty to a reduced charge.

Only in the final minutes was there a brief cessation in the warfare. One audience member asked the candidates to cite something positive about each other, and Clinton reached for a common answer to such questions. "Look I respect his children," she said. "His children are incredibly able and devoted, and I think that says a lot about Donald."

Trump thanked her for the "very nice compliment," and then offered his own.

"I will say this about Hillary: She doesn't quit, she doesn't give up," he said. "She's a fighter."

A moment later, after the moderators concluded the debate, Trump reached out his hand, and Clinton shook it.