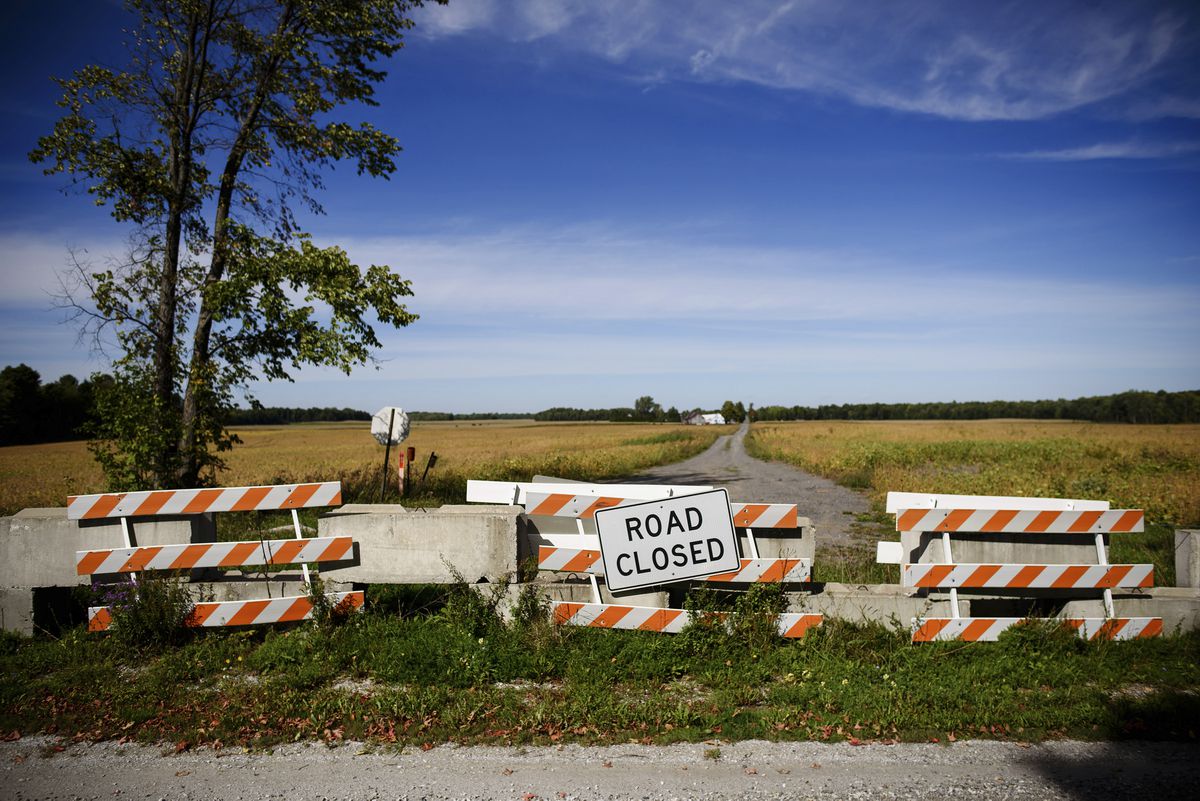 A barricade blocks a road that leads to Canada along VermontÕs 90-mile border with the country, in Alburgh, Sept. 21, 2016. The Northern border of the United States is nearly three times the Southern border’s length, but the Border Patrol in the North makes do with about one-tenth the manpower. (Jacob Hannah / The New York Times)

A barricade blocks a road that leads to Canada along VermontÕs 90-mile border with the country, in Alburgh, Sept. 21, 2016. The Northern border of the United States is nearly three times the Southern border’s length, but the Border Patrol in the North makes do with about one-tenth the manpower. (Jacob Hannah / The New York Times)

ALBURGH, Vt. — An hour before sunset, Miguel Ramos waited in his gray minivan for three Guatemalans to walk undetected across the Canadian border and make illicit entry into the United States.

They walked around a gate to a wooded area, trying to evade security cameras, then quickly piled into the back of the van, and Ramos tried to drive off. But federal agents who had been tipped off about a suspicious vehicle swooped in to arrest him and his passengers. Ramos, 32, of the Bronx, was the only one who could produce proper identification.

While the Southern border with Mexico, about 2,000 miles, attracts much more attention, the 5,500-mile Northern border with Canada offers more opportunity for illegal crossing. In many places, like this Vermont border town, there are few signs of where one nation ends and another begins. Some homes, farms and businesses even sit astride the two countries; in other areas, a small white obelisk is the only marker of a border. In the past year, agents made 3,000 apprehensions along the Northern border, compared with 100 times that many along the Southwestern border with Mexico. They also seized 700 pounds of marijuana and cocaine in the North compared with 1.6 million pounds along the heavily gated Southern border.

But authorities acknowledge that they cannot say with certainty how much criminal activity occurs as a result of Northern border crossings because their means of detection are so limited.

"The problem is that we don't know what the threats and risk are because so much attention is given to the Southwest border," said Sen. Heidi Heitkamp, D-N.D.

This area is a haven for smugglers and cross-border criminal organizations. Each year, Border Patrol agents catch hundreds of drug smugglers and human traffickers who use the sparsely populated and heavily wooded areas along the Vermont-Canada border to bypass the agents, cameras, sensors and other electronic devices that the Department of Homeland Security has installed to make up for the lack of personnel.

The expanse and remoteness of much of the Northern border, which includes Alaska, make the task of law enforcement daunting, said Norman M. Lague, who leads the Border Patrol station in Champlain, New York, one of the eight stations in the Swanton region that oversee border security operations in Vermont, upstate New York and New Hampshire. "We do the best that we can with the resources we have," he said.

The border with Canada, the largest between two countries in the world, has hardly warranted a mention in a presidential campaign dominated by Donald Trump's call to build a wall between the United States and Mexico. But officials and law enforcement officers say that makes the region more vulnerable in many ways to exploitation by criminal enterprises and possible terrorists.

Since the Sept. 11, 2001, attacks, the Department of Homeland Security has increased the number of Border Patrol agents stationed along the Northern border to more than 2,000, from about 340, in addition to adding ground sensors, drones and other detection devices. Nearly 18,000 agents patrol the Southwestern border with Mexico.

Ramos was driving from Derby Line, Vermont, last month when agents stopped his van, which has North Carolina license plates. A fourth passenger was another Guatemalan man, Gerardo Xar-Marroquin, who the police said had hired Ramos to spirit the group into the United States.

Ramos and Xar-Marroquin were charged with illegally transporting immigrants into the United States. This was just one of dozens of large- and small-scale smuggling attempts the Border Patrol has stopped this year.

In the Detroit region, the Border Patrol said it arrested people in a smuggling ring operated by Piotr Lisiecki, a Polish citizen who had overstayed his visa. Lisiecki was arrested in August while trying to smuggle several residents of Poland into Port Huron from across the river in Canada, said Douglas E. Harrison, chief patrol agent in the Detroit Sector.

Heitkamp has sponsored legislation, along with several other senators from border states, including Gary Peters, D-Mich., and Kelly Ayotte, R-N.H., that would require the Department of Homeland Security to assess the national security risks posed by the terrorist and criminal organizations operating on the Canadian border.

During a hearing last year before the Senate Homeland Security Committee, several law enforcement officials raised concerns about terrorists making their way to the United States through the sparsely populated areas along the border. In 2007, people from the Government Accountability Office managed to cross from Canada into the United States carrying a duffel bag with contents that looked like radioactive material, and they never encountered a law enforcement officer.

"No one is arguing that the Northern border is the same as what's happening down on the Southwestern border, but we can't forget about this area," said Sen. Jon Tester, D-Mont. "If we take our eye off of that, they will go where the weakest link is."

Border Patrol agents here in the Swanton region say the biggest problem they face along the nearly 300-mile area they patrol is drug and human smuggling from criminal organizations that work on both sides of the border.

While marijuana is the main drug, officials say they are starting to see an increase in drugs like fentanyl, which contributes to the national opioid and prescription drug abuse crisis.

Drug smuggling is a continuing issue because the lack of security and natural barriers make the point of entry from Canada much easier for the smugglers than the Southern border.

In January, Border Patrol agents arrested Cedrik Bourgault-Morin, 22, a Canadian from Quebec, after he was detected by night vision cameras and ground sensors along a railroad track near the border in the village of North Troy, Vermont, pulling a sleigh with a 182-pound duffel bag. Agents said Bourgault-Morin, who was wearing white camouflage, was trying to hide the bag in the snow when he was caught.

Agents found 300 vacuum-sealed bags of Xanax, an anti-anxiety medication, in the duffel bag. According to court records, the pills had a street value of $1.6 million. Bourgault-Morin was sentenced to one year in prison in August.

In addition to drugs, the smuggling of people is another challenge for law enforcement.

Bradley S. Curtis, the acting division chief for the Border Patrol Swanton Division, said agents had caught hundreds of people from dozens of countries trying to enter the United States through the dense forests and open fields.

"We've seen people from all over the world: Chinese, Haitians, Eastern Europeans, Brazilians, you name it," Curtis said.

In February, Reynaldo Reyes, 39, a native of Quebec, was sentenced to 60 months in prison for running a ring that smuggled people across the border from Canada at night. Several of the people who were caught with him told Border Patrol officials that Reyes charged them as much as $8,000 a person for their passage.

Law enforcement also faces another singular challenge in the North: Native American reservations where they have no legal authority to enter, making them attractive to drug smugglers.

Another issue is that officials here admit they do not actually know how many people and how much drugs get through. Officials acknowledge that many more people than they apprehend could be crossing the border illegally.

For example, cameras along the border recently showed four men dressed in camouflage outfits who appeared to have weapons crossing the border. Agents never caught them. Another camera image showed a group of about half a dozen people walking through the woods at night across the border. Agents said they had no information on the group.

"These guys make me nervous," Curtis said. "My technology can show me when someone makes an entry, but it can't tell me who they are, and we can't always get there in time to catch them."