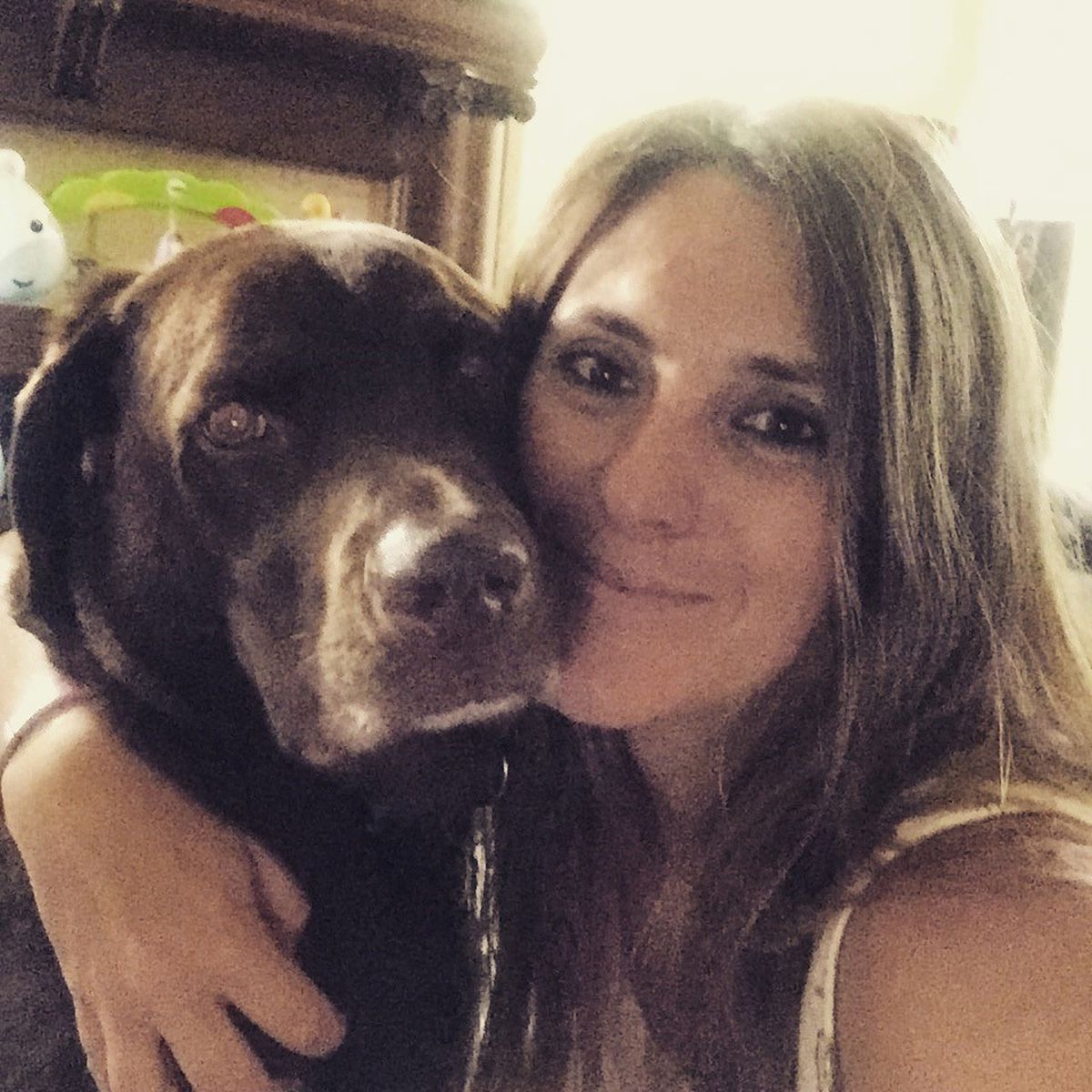 Lisa McCombs says she was barred from boarding multiple American Airlines flights because she was traveling with her service dog, Jake. (Photo courtesy Lisa McCombs)

Lisa McCombs says she was barred from boarding multiple American Airlines flights because she was traveling with her service dog, Jake. (Photo courtesy Lisa McCombs)

Lisa McCombs, a decorated Army veteran who served in Iraq and Afghanistan, claims she'd never had any trouble flying with her service dog, a Labrador retriever named Jake.

That changed one year ago, when she was barred from boarding a regional American Airlines flight with Jake, who was wearing his service vest and was properly documented at the time, according to a federal lawsuit.

McCombs suffers from PTSD and relies on her dog to calm her anxiety and panic before it overwhelms her.

But as she waited to board her return flight from Manhattan, Kansas, an airline agent approached her and asked "in a condescending tone, 'ummm, are you going to fly with that?' " the suit states.

Thus began a 48-hour nightmare, in which McCombs says she was unable to return to her home in Gulfport, Miss., while she was repeatedly interrogated, stressed and humiliated, causing her mental health to suffer.

After missing her scheduled flight, the suit claims, McCombs was "verbally assaulted" by two agents who loudly demanded, in "rapid succession," that she tell them the nature of her disability and explain how her service dog helps.

Their conduct implied that McCombs was falsifying her disability, the suit claims, adding that their tone was so harsh that strangers began scolding the agents and trying to comfort McCombs.

"I have PTSD, look at me, I'm an anxious mess!" McCombs replied, according to the suit filed in federal court in Mississippi on Monday,

"He's my service dog! I don't understand why I'm being treated like this!"

McCombs, the lawsuit states, "was emotionally crushed and humiliated by the conduct of (Americans') agents, who discriminated against her because of her disability and publicly shamed her."

The suit alleges negligence, breach of contract and violation of the Americans with Disabilities Act and asks American Airlines to compensate McCombs for her airline tickets, legal fees and medical treatment. She is also pursuing damages from American and its regional subsidiary, Envoy Air, for "reckless disregard" of her rights.

Army officials say McCombs enlisted in 2005 and did tours in Iraq and Afghanistan. By the time she was honorably discharged, in 2009, she had reached the rank of captain, according to military records. McCombs received multiple awards for service, including the Afghanistan Campaign Medal with Campaign Star, the NATO Afghanistan Service Medal and the Global War on Terrorism Service Medal.

"After a trauma or life-threatening event, it is common to have reactions such as upsetting memories of the event, increased jumpiness, or trouble sleeping," the VA says. "If these reactions do not go away or if they get worse, you may have Post-Traumatic Stress Disorder."

Veterans of the two wars, the VA notes, were often at risk for death or injury. They may have seen others hurt or killed. They may killed or wounded others themselves. "These and other factors can increase their chances of having PTSD or other mental health problems."

[How a service dog opened an Alaska veteran's world (plus photos)]

According to the National Center for PTSD, "there is not enough research yet to know if dogs actually help treat PTSD and its symptoms."

But the dogs are trained to notice PTSD symptoms, such as anxiety or panic or nightmares, and then interrupt those symptoms by forcing their owner to refocus on the animal, according to Service Dogs for America.

McCombs' service animal is no different, her lawsuit states. When Jake senses his owner is suffering from extreme anxiety, the suit notes, he "moves his body into close contact with her to distract her attention away from the factors that may cause her panic to spike, and calm her."

The suit states that McCombs tried to show agents an email proving that Jake was her service animal; but, it says, an agent remained adamant that he'd spoken to "headquarters" and there was no debate: McCombs could pay $125 to have her service dog shipped as "cargo" under the plane, or she could resubmit her documentation and try to book a different flight two days later.

McCombs tried to explain that she didn't live in Kansas and lacked even a toothbrush at the time, the lawsuit states. When she cursed out loud in frustration, the suit states, an agent threatened to have her arrested.

Agents alerted police, the suit notes, and officers who arrived offered to take McCombs to a shelter for the night after the agent demanded that she vacate the airport lobby.

The suit alleges that McCombs was never offered any accommodations over the next 48 hours.

After a sleepless night, the suit states, McCombs was able to book a flight with an American Airlines customer-service agent who assured the veteran that she'd be able to fly home that day with Jake. The suit states that the agent made a notation in the airline's computer system that she would be traveling with a service animal, and McCombs printed out documentation that confirmed Jake, in fact, was a service animal.

But when she arrived at the airport, the suit claims, the previous day's events began to repeat themselves. The lawsuit says she quickly encountered a hostile American Airlines manager who denied that her reservation included information about a service animal and again told her to go wait in an airport lobby.

As the delay continued, McCombs began to suspect she was being purposefully slowed so she'd miss her flight. When the manager finally approached McCombs, the suit states, she did so so aggressively that Jake began to "whine" and "shift uncomfortably." McCombs told the woman it was against the law to harass a service animal and its handler, the suit states; the manager "chuckled" and "walked away."

Later, the suit states, the manager returned McCombs' paperwork and claimed that her disability and need for a service animal could not be confirmed because her letter from a doctor was missing a date and a certificate confirming Jake's graduation had to be dated within the previous year.

When an American Airlines customer service agent failed to help, McCombs decided to book a flight with a different airline, the suit states; but it meant she'd have to fly out of Kansas City, a two-hour drive away. After booking a $500 flight in Kansas City and paying $100 for a rental car, McCombs was contacted by a woman from American Airlines corporate offices who booked a third flight and assured the veteran "there would be no problem" traveling with Jake.

"Ms. McCombs was embarrassed, humiliated and mortified," the suit adds.

McCombs explained to the confused airlines staffers that she did not, in fact, need a wheelchair, the suit states, but the representatives insisted on escorting her through the airport, "making a spectacle of Ms. McCombs."

McCombs got home two days after her originally scheduled arrival, the suit notes.

The suit adds that Jim Palmersheim, a senior manager of Military and Veterans Programs for American Airlines, later called her to express "how embarrassed" the company was about the incident. The manager admitted that the airline "didn't do the right thing" and asked McCombs if she'd like to be attend an event for veterans and whether she wanted "some international, first class tickets."

Reached by phone, Matt Miller, an American Airlines spokesman, said the company "appreciates and thanks Ms. McCombs for her service to our country."

He noted that Palmersheim "immediately reached out to Ms. McCombs and spoke to her for more than an hour to obtain additional information on what occurred at both Manhattan Regional Airport and Dallas/Fort Worth International Airport."

"The process for traveling with a service animal on American is in line with applicable federal regulations," he said. "We will not be able to comment on the allegations in the lawsuit, since this matter is pending litigation."

The Department of Transportation requires that all U.S. airlines allow passengers to fly with their service animals in the cabin, according to the Federal Aviation Administration.