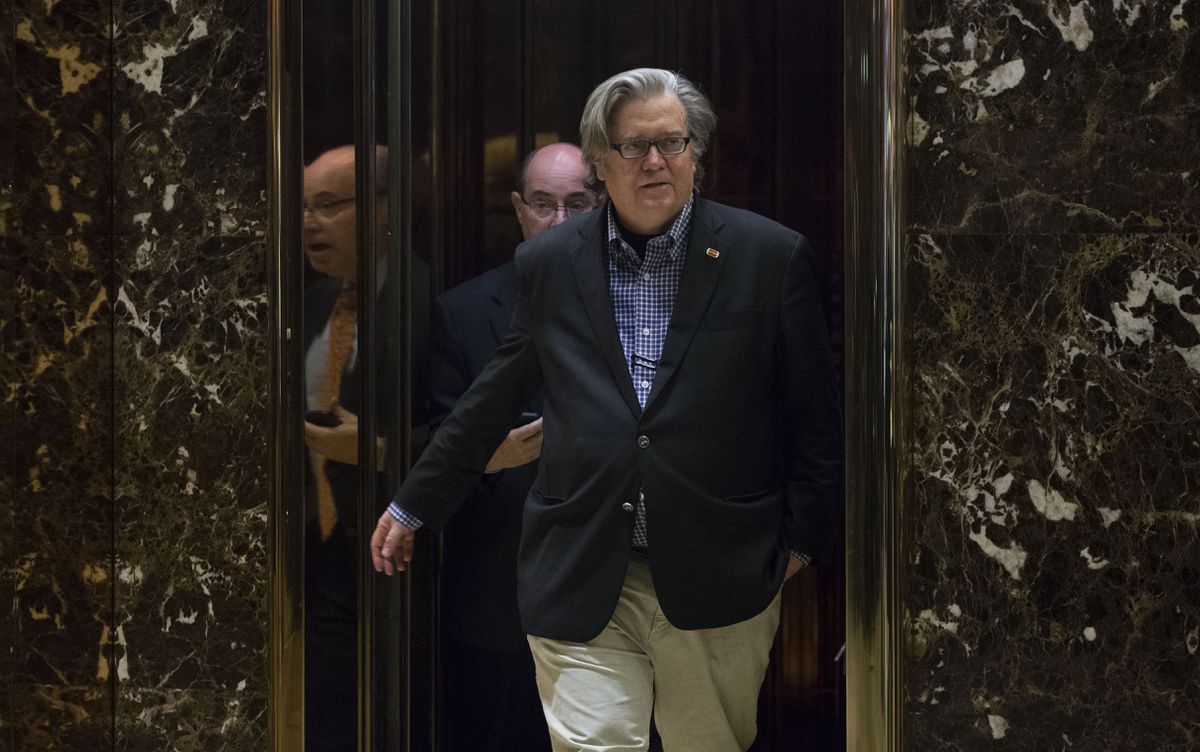 President-elect Donald Trump's decision to appoint Stephen Bannon as his chief strategist in the White House has drawn a sharp rebuke from political strategists who see in Bannon a controversial figure too closely associated with the "alt-right" movement, which white nationalists have embraced.

Bannon, who was the executive chairman of Breitbart News before joining the Trump campaign in August, will serve as chief strategist and senior counselor for Trump; that will give Bannon authority over the strategic direction of the White House. Bannon will assume a similar role to that of Karl Rove during George W. Bush's administration and recently by longtime strategist John Podesta under President Barack Obama. He and Republican National Committee Chairman Reince Priebus, who will become White House chief of staff, will be among Trump's top advisers.

The announcement has produced intense hand-wringing in Washington, D.C., and sharp denunciations from political observers and strategists critical of Breitbart News's close association with the alt-right, a fringe conservative movement saturated with racially insensitive rhetoric and elements of outright white nationalism.

The Southern Poverty Law Center, a hate-watch group, has accused Breitbart of explicitly embracing ethno-nationalism. After Bannon's elevation was announced, the law center tweeted several controversial stories written by Breitbart under Bannon's control, including a piece published two weeks after the mass killing at a black church in Charleston, South Carolina, last year: "Hoist it high and proud: the confederate flag proclaims a glorious heritage."

"Stephen Bannon was the main driver behind Breitbart becoming a white ethno-nationalist propaganda mill," the law center wrote via Twitter in its first statements on Bannon's elevation. "Trump should rescind this hire. In his victory speech, Trump said he intended to be president for 'all Americans.' Bannon should go."

Trump's critics, across the political spectrum, immediately blasted the move on social media.

The racist, fascist extreme right is represented footsteps from the Oval Office. Be very vigilant America.

With a white nationalist senior advisor, Trump is not just ignoring the impact of his rhetoric – he is actively terrifying the country.

Bannon's personal history also has been mired in controversy. Shortly after he joined the Trump campaign, court documents revealed that his ex-wife, Mary Louise Piccard, had accused Bannon of domestic violence and anti-Semitic language in 2007. (The documents were obtained and first reported by the New York Daily News.)

"The biggest problem he had with Archer is the number of Jews that attend," Piccard said in a statement to the court. "He said that he doesn't like the way they raise their kids to be 'whiny brats' and that he didn't want the girls going to school with Jews." Bannon has denied the accusations.

Ben Shapiro, a former Breitbart editor who worked closely with Bannon, called him a "legitimately sinister figure" in an article he published on the Daily Wire after Bannon joined the Trump campaign.

"Many former employees of Breitbart News are afraid of Steve Bannon. He is a vindictive, nasty figure, infamous for verbally abusing supposed friends and threatening enemies," Shapiro wrote.

Some of the Trump campaign's most controversial moves in the final months of the campaign were attributed to Bannon, who is known for his combative and unfiltered style. When Trump, before the second presidential debate, invited several women who had accused Bill Clinton of sexual misconduct to hold a news conference, Bannon stood in the back of the room smiling broadly.

[Trump is about to learn America's 'deep secrets']

Bannon's appointment brings into focus many of the uncomfortable racial tensions surrounding Trump's campaign. Throughout the campaign, Trump's critics regularly accused him of using anti-immigrant language and racial grievances to motivate his supporters, charges that he denied and dismissed. He expressed surprise when asked about racial slurs that were being used against African Americans and other minority groups since his election during an interview with CBS's "60 minutes" that aired Sunday.

"I am so saddened to hear that. And I say stop it, if it helps. I will say this, and I will say right to the cameras: Stop it," Trump added.