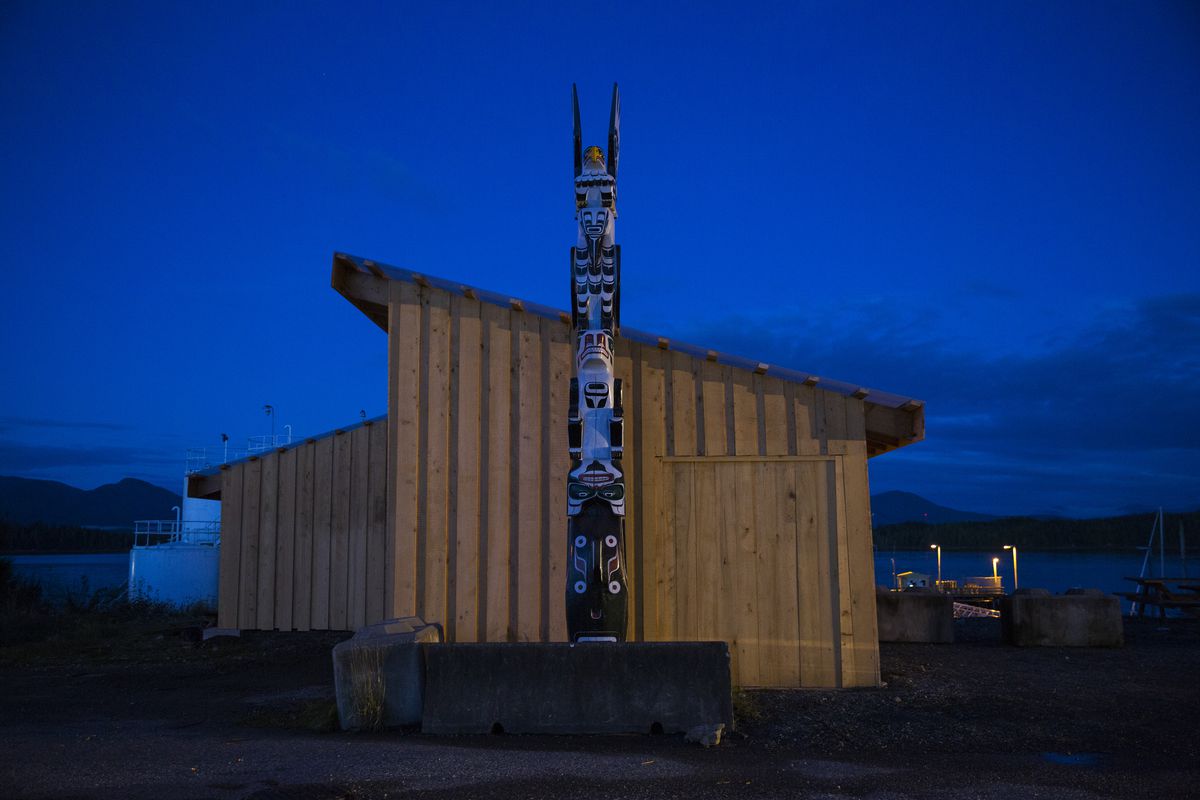 A totem pole near the dock in Bella Bella, British Columbia, Canada, on Sept. 1. As part of an emerging movement, tribes have aligned to assert their government pacts and to demand management rights over government land in the United States and Canada. (Ruth Fremson/The New York Times)

A totem pole near the dock in Bella Bella, British Columbia, Canada, on Sept. 1. As part of an emerging movement, tribes have aligned to assert their government pacts and to demand management rights over government land in the United States and Canada. (Ruth Fremson/The New York Times)

The simmering standoff between the police and Native Americans and their allies who oppose a giant oil pipeline project in North Dakota is the most visible sign yet of an emerging movement that is shifting the debate about how public lands across North America should be managed.

From the rocky, pebbled beaches north of Seattle, where the Lummi Nation has led the fight against a proposed coal terminal, to southern Utah, where a coalition of tribes is demanding management rights over a proposed new national monument, to the tiny wooded community of Bella Bella, British Columbia, 350 miles north of the U.S. border, Native Americans are asserting old treaty rights and using tribal traditions to protect and manage federally owned land.

"If you want to own it, you have to act like you own it," said Kelly Brown, the director of resource management for the Heiltsuk Nation in Bella Bella. The Heiltsuk pressed the Canadian government for joint management of the local herring fishery and won the argument this year through a campaign of sit-ins and a political lobbying.

The force for change comes in part from tribes' forming new alliances as they defend territorial claims and manage resources. In some places, the focus is on fossil fuels and pollution; in others, an awareness that climate change could have a disproportionately harsh impact on tribal populations, because of where they live in coastal or forest areas, or their dependence on natural resources or foods.

"The tribal voice, and their concerns and what happens on those lands — that's accelerating right now, and where it's going to go I don't know," said John Freemuth, a professor of public policy at Boise State University who studies public lands. "It's a big story and a growing story," he added.

Standing Rock Reservation in North Dakota, in particular, where the Sioux and others are fighting the construction of the 1,170-mile Dakota Access pipeline, has been one battleground. Native Americans and environmental activists say the project threatens the region's water supply and would harm sacred cultural lands. The Army announced late Monday it had finished reviewing its process for approving the pipeline's route on land owned by the Army Corps of Engineers. But it said it needed more study and wanted input from the Standing Rock Sioux before it allowed the pipeline to cross under a Missouri River reservoir.

Pipeline protesters, linking their effort to protests over the last week in many U.S. cities in opposition to President-elect Donald Trump, planned rallies on Tuesday in cities around the world from Oslo to Dallas.

A vast stretch of deep-green temporal rain forest called the Great Bear — a forest bigger than Maine that extends from northwest Washington through British Columbia to Alaska — has emerged as a laboratory for change. An agreement signed earlier this year between British Columbia and 27 tribal nations, including the Heiltsuk, protects much of the forest from commercial logging and shifts some management authority to the tribes.

In southern Nevada, the Moapa Band of Paiutes is seeking federal protection for lands that lie within the ranch owned by Cliven Bundy, the father of Ammon and Ryan Bundy, who were recently acquitted of criminal charges for their roles in the armed occupation of a wildlife refuge in Oregon earlier this year.

"This is how land resource decisions are going to be made in the future — through co-management with people who have been on the land forever," said Hadley Archer, the executive director of the Nature Conservancy Canada, which helped put together the Great Bear forest agreement. To that end, the University of Victoria law school in British Columbia will begin enrolling students next year in a degree program that will combine the traditional study of court precedents and legislation and the study of tribal law.

People like Chantal Pronteau, a member of the Kitasoo/Xai'Xais Nation (pronounced hay-hay), are walking this uncharted road.

Last year, Pronteau, 22, put on a uniform as a member of the Coastal Guardian Watchmen — a Native American patrol — to monitor the environment and guard against poachers and illegal tree-cutters from Klemtu, her community's tiny home village of about 300 people. The village, in British Columbia, is reachable only by boat or air.

Changes are everywhere, she said. Grizzly bears have been swimming across fjords and rivers to colonize islands where they have not been seen before, as salmon become harder to find. Whales are wintering off the coast rather than heading to Hawaii, breaking another ancient pattern. A treasured culinary seaweed disappeared this year.

"We're the eyes and the ears," she said as she walked a stretch of rocky beach in her black Coastal Guardian Watchman jacket. The importance of her work patrolling the tribe's territory by boat and on foot, she added, "feels beyond what words can describe, because of what we're working for, who we're working for, and why we're working."

The great mossy forest belt of the Pacific Northwest — culturally, environmentally and economically crucial to people here for millennia — was where this new power dynamic began. In the mid-1990s, indigenous people began protesting the clear-cutting of trees in the Great Bear forest. Involvement of conservation groups like the Nature Conservancy then led to a series of agreements that were capped earlier this year with the tribes and the government of British Columbia banning or strictly limiting industrial logging in nearly half of that forest.

An endowment fund created earlier in that process, in 2007, linked economic development and tribe-led science and management in the Great Bear forest. That fund helps back programs like the Coastal Guardian Watchmen, which involves at least 14 tribes in the Great Bear area out of 27 nations that signed the agreement.

Like climate change itself, though, there are few certain outcomes. Governments can override Native arguments. Coastal Guardians like Pronteau also sometimes have the delicate task of trying to persuade trophy game hunters that tribal rules ban bear hunting in their territory, even though the hunters may have legal permits. Some hunters respond and retreat, she said; others do not.

Tribes have aligned to assert their government pacts and to demand management rights over government land in the United States and Canada.

Legal wrinkles echo across a century or more. Many First Nations in British Columbia, for example, including the Kitasoo/Xai'Xais, never signed treaties with the Canadian government, which means that unlike most other tribes across the rest of Canada and United States, they never ceded any dominion over their lands. The future, those tribes say, is an open book.

But in other places, the legal power of treaties has been reinforced. When the Army Corps of Engineers said earlier this year that a proposed coal terminal in northwest Washington state would threaten fishing rights guaranteed to the Lummi Nation in 1855 — and again this week when it said that a "government-to-government" relationship with the Sioux was necessary to discuss the North Dakota pipeline — it sent a thunderclap across tribal lands. Treaties still have teeth.

The echo also hangs heavy in these ancient lands. Archaeological evidence shows a human presence in the Pacific Northwest dating back more than 13,000 years.

"What it comes down to is our cultural history, and the land that we've been handed down by our ancestors to take care of," said William G. Housty, the chairman of the Heiltsuk Integrated Resource Management Department.

"I heard my grandfather say, "If the world ever ends, it's going to be us killing ourselves,"' Housty said as he leaned against a fish-cleaning station at a tribal salmon hatchery. "And that's all it is," he said, gesturing to the world around where he stood. "At the end of the day, we need to manage ourselves."