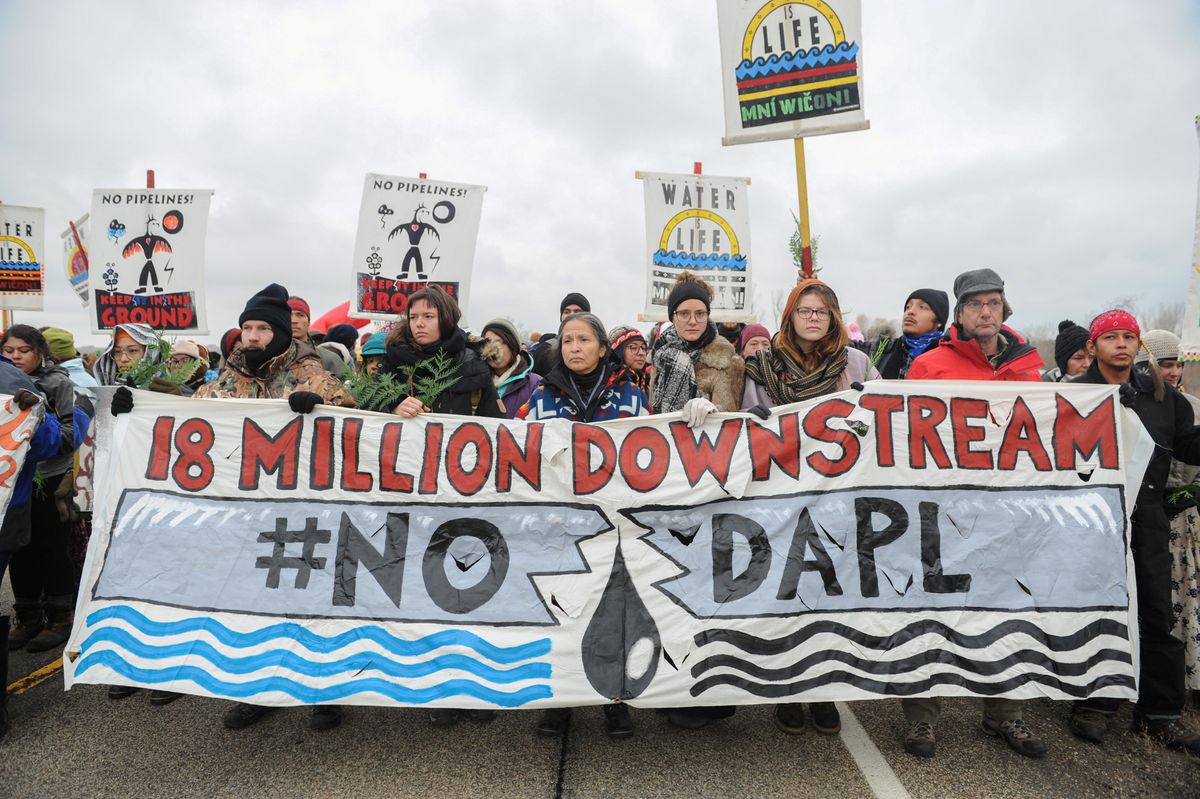 Protesters block highway 1806 in Mandan during a protest against plans to pass the Dakota Access pipeline near the Standing Rock Indian Reservation, North Dakota on Nov. 23, 2016. (REUTERS/Stephanie Keith)

Protesters block highway 1806 in Mandan during a protest against plans to pass the Dakota Access pipeline near the Standing Rock Indian Reservation, North Dakota on Nov. 23, 2016. (REUTERS/Stephanie Keith)

U.S. authorities said on Sunday they had no plans to forcibly remove activists protesting plans to run an oil pipeline beneath a lake near the Standing Rock Sioux reservation in North Dakota, despite telling them to leave by early December.

The U.S. Army Corps of Engineers, which manages the federal land where the main camp protesting the Dakota Access pipeline is located, said last week it would close public access to the area north of the Cannonball River on Dec. 5.

On Sunday, the agency said in a statement that it had "no plans for forcible removal" of protesters. The statement said anyone who remained would be considered unauthorized and could be subject to various citations. It also said emergency services might not be adequately provided to the area.

"The Army Corps of Engineers is seeking a peaceful and orderly transition to a safer location," the statement said. "This will reduce the risk of harm to people in the encampments caused (by) the harsh North Dakota winter conditions."

A representative for the agency could not be immediately reached on Sunday to provide further clarification on its plans.

Organizers told a news conference on Saturday at the main protest site where about 5,000 people are camped that they had no intention of moving.

There are smaller camps on land not subject to the planned restrictions, including an area south of the Cannonball River where the Corps said it was establishing a free-speech zone.

Demonstrators have protested for months against the $3.8 billion Dakota Access Pipeline, owned by Energy Transfer Partners LP, saying it poses a threat to water resources and sacred Native American sites.

The 1,172-mile project is mostly complete except for the segment planned to run under Lake Oahe, less than half a mile north of Standing Rock.

The Obama administration in September postponed final approval of a permit required to allow tunneling beneath the lake, a move intended to give federal officials more time to consult with tribal leaders. The delay also led to escalating tensions over the project.

Last weekend, police used water hoses in subfreezing weather in an attempt to disperse about 400 activists near the proposed tunnel excavation site.