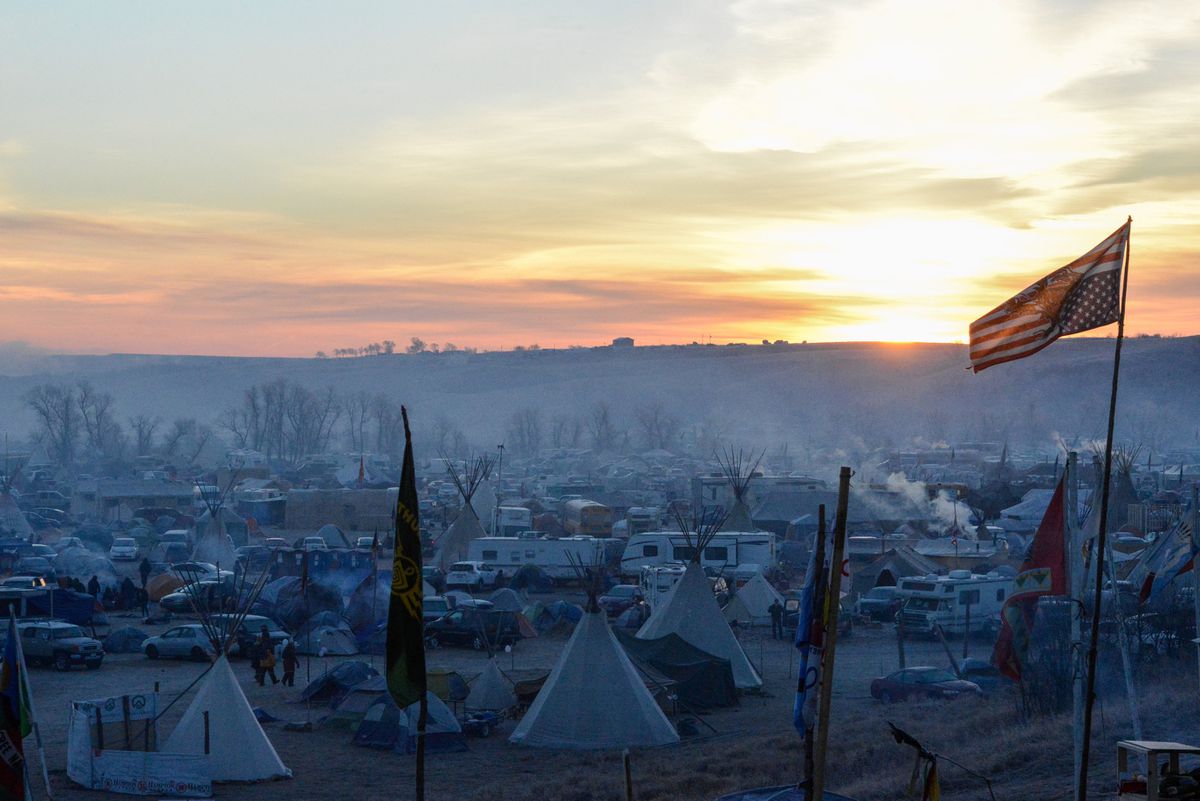 The Oceti Sakowin camp is seen at sunrise during a protest against plans to pass the Dakota Access pipeline near the Standing Rock Indian Reservation, near Cannon Ball, North Dakota, Nov. 2. (Stephanie Keith / Reuters)

The Oceti Sakowin camp is seen at sunrise during a protest against plans to pass the Dakota Access pipeline near the Standing Rock Indian Reservation, near Cannon Ball, North Dakota, Nov. 2. (Stephanie Keith / Reuters)

CANNON BALL, N.D. – North Dakota officials on Tuesday moved to block supplies from reaching oil pipeline protesters at a camp near the construction site, threatening to use hefty fines to keep demonstrators from receiving such critical supplies as food, building materials and even portable bathrooms.

Activists have spent months protesting plans to route the $3.8 billion Dakota Access Pipeline beneath a lake near the Standing Rock Sioux reservation, saying the project poses a threat to water resources and sacred Native American sites.

State officials said on Tuesday they would fine anyone bringing prohibited items into the main protest camp following Gov. Jack Dalrymple's "emergency evacuation" order on Monday. Earlier, officials had warned of a physical blockade, but the governor's office backed away from that.

Law enforcement would take a more "passive role" than enforcing a blockade, said Maxine Herr, a spokeswoman for the Morton County Sheriff's Department.

"The governor is more interested in public safety than setting up a road block and turning people away," Herr said by telephone.

Officers will stop vehicles they believe are headed to the camp and inform drivers they are committing an infraction and could be fined $1,000.

There will be no "hard road block," according to Cecily Fong, a spokeswoman for the North Dakota Department of Emergency Services, but these penalties should serve as a hindrance.

"So that effectively is going to block that stuff (supplies), but there is not going to be a hard road block," Fong said by telephone.

A spokeswoman from the Standing Rock Sioux tribe was not immediately available for comment.

The 1,172-mile pipeline project, owned by Texas-based Energy Transfer Partners LP, is mostly complete except for a segment planned to run under Lake Oahe, a reservoir formed by a dam on the Missouri River.

Thousands of people are protesting at camps located on U.S. Army Corps of Engineers land, north of the Cannonball River in Cannon Ball, North Dakota. The main protest camp is called Oceti Sakowin, near Cannon Ball.

"It's bogus and I don't know about the legality of it," said Kandi Mossett, an organizer with Indigenous Environmental Network. "We're not afraid. We're moving in and out of the camp at will. So people shouldn't be afraid of coming and supporting the water protectors. They've been bullying us since day one."

Additional reporting by David Gaffen and Mica Rosenberg in New York and Ernest Scheyder in Houston.