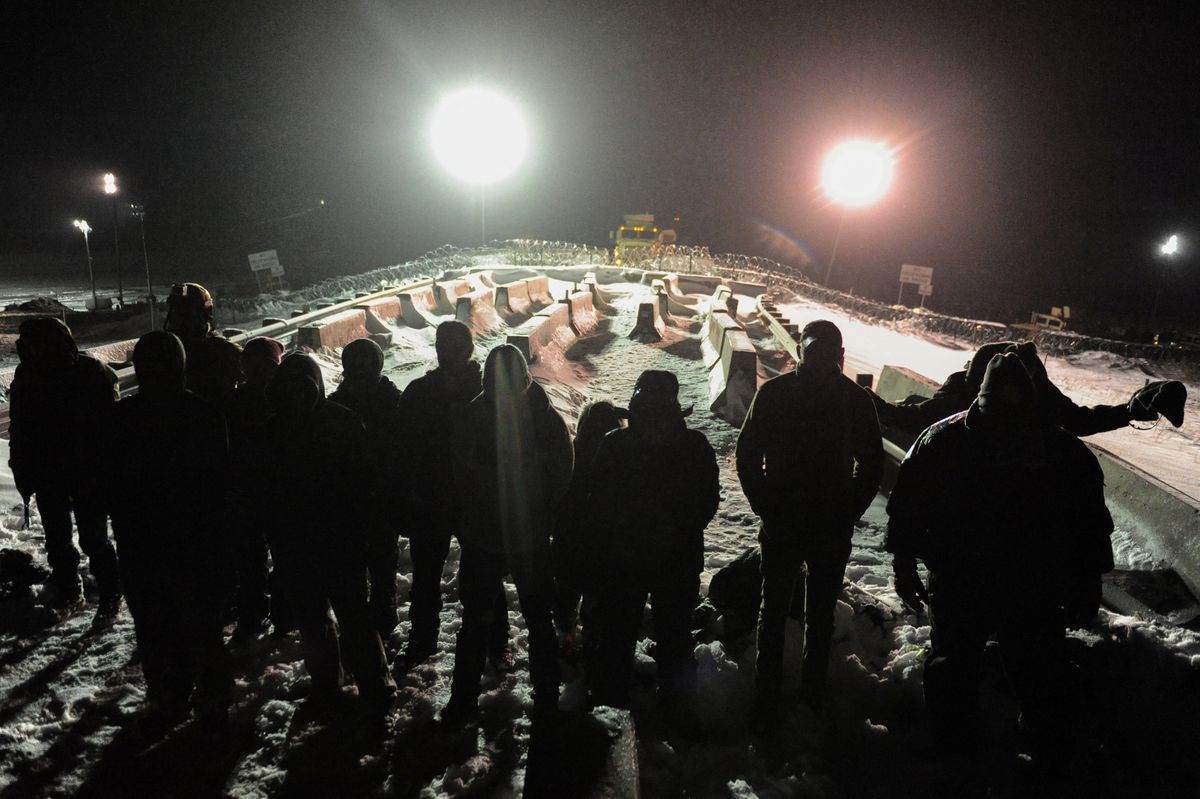 Veterans have a confrontation with police on Backwater bridge during a protest against plans to pass the Dakota Access pipeline near the Standing Rock Indian Reservation, near Cannon Ball, N.D., on Thursday. (Stephanie Keith / Reuters)

Veterans have a confrontation with police on Backwater bridge during a protest against plans to pass the Dakota Access pipeline near the Standing Rock Indian Reservation, near Cannon Ball, N.D., on Thursday. (Stephanie Keith / Reuters)

CANNON BALL, N.D. – U.S. military veterans were building barracks on Friday at a protest camp in North Dakota to support thousands of activists who have squared off against authorities in frigid conditions to oppose a multibillion-dollar pipeline project near a Native American reservation.

Veterans volunteering to be human shields have been arriving at the Oceti Sakowin camp near the small town of Cannon Ball, where they will work with protesters who have spent months demonstrating against plans to route the Dakota Access Pipeline beneath a lake near the Standing Rock Sioux Reservation, organizers said.

['This pipeline represents something deeper': Voices from Standing Rock]

Some of the more than 2,100 veterans who signed up on the Veterans Stand for Standing Rock group's Facebook page are at the camp, with hundreds more expected during the weekend. Tribal leaders asked the veterans, who aim to form a wall in front of police to protect the protesters, to avoid confrontation with authorities and not get arrested.

Wesley Clark Jr., a writer whose father is retired U.S. Army General Wesley Clark, met with law enforcement on Friday to tell them potentially 3,500 veterans would join the protest and the demonstrations would be carried out peacefully, protest leaders said.

The plan is for veterans to gather in Eagle Butte, a few hours away, and then travel by bus to the main protest camp, organizers said, adding that a big procession is planned for Monday.

Protesters began setting up tents, tepees and other structures in April and the numbers swelled in August at the main camp.

Joshua Tree, 42, from Los Angeles, who has been visiting the camp for weeks at a time since September, said he felt pulled to the protest.

"Destiny called me here," he said at the main camp. "We're committed."

Those voices have been heard by companies linked to the pipeline as well, including banks that have been targeted by protesters for their financing of the pipeline.

Wells Fargo & Co. said in a Thursday letter it would meet with Standing Rock elders before Jan. 1 "to discuss their concerns related to Wells Fargo's investment" in the project.

There have been violent confrontations near the route of the pipeline with state and local law enforcement, who used tear gas, rubber bullets and water hoses on the protesters, even in freezing weather.

The number of protesters in recent weeks has topped 1,000. State officials on Monday ordered them to leave the snowy camp, which is on U.S. Army Corps of Engineers land, citing harsh weather, but on Wednesday they said they would not enforce the order.

"There is an element there of people protesting who are frightening," North Dakota Attorney General Wayne Stenehjem said on Thursday. "It's time for them to go home."

Morton County Sheriff Kyle Kirchmeier spoke by phone on Friday with U.S. Attorney General Loretta Lynch, but assistance for law enforcement and a timeline for a resolution to the situation were not offered, the sheriff's office said.

"It's time for more actions from the federal government, not more words," Kirchmeier said in a statement.

U.S. President-elect Donald Trump said on Thursday he supported the completion of the pipeline and his transition team also said he supported peaceful protests.

North Dakota Gov.Jack Dalrymple said on Wednesday it was "probably not feasible" to reroute the pipeline but he would try to rebuild a relationship with Standing Rock Sioux leaders.

On Friday, Morton County Commission Chairman Cody Schulz said his office has been working in conjunction with the governor's office to meet with tribal leaders soon.

Since the start of demonstrations, 564 people have been arrested, the Morton County Sheriff's Department said.

The temperature in Cannon Ball is expected to fall to 4 degrees Fahrenheit by the middle of next week, according to Weather.com forecasts.

The 1,172-mile pipeline project, owned by Texas-based Energy Transfer Partners LP, is mostly complete, except for a segment planned to run under Lake Oahe, a reservoir formed by a dam on the Missouri River.

Protesters, who refer to themselves as "water protectors," have been gearing up for the winter while they await the Army Corps decision on whether to allow Energy Transfer to tunnel under the river. The Army Corps has twice delayed that decision.