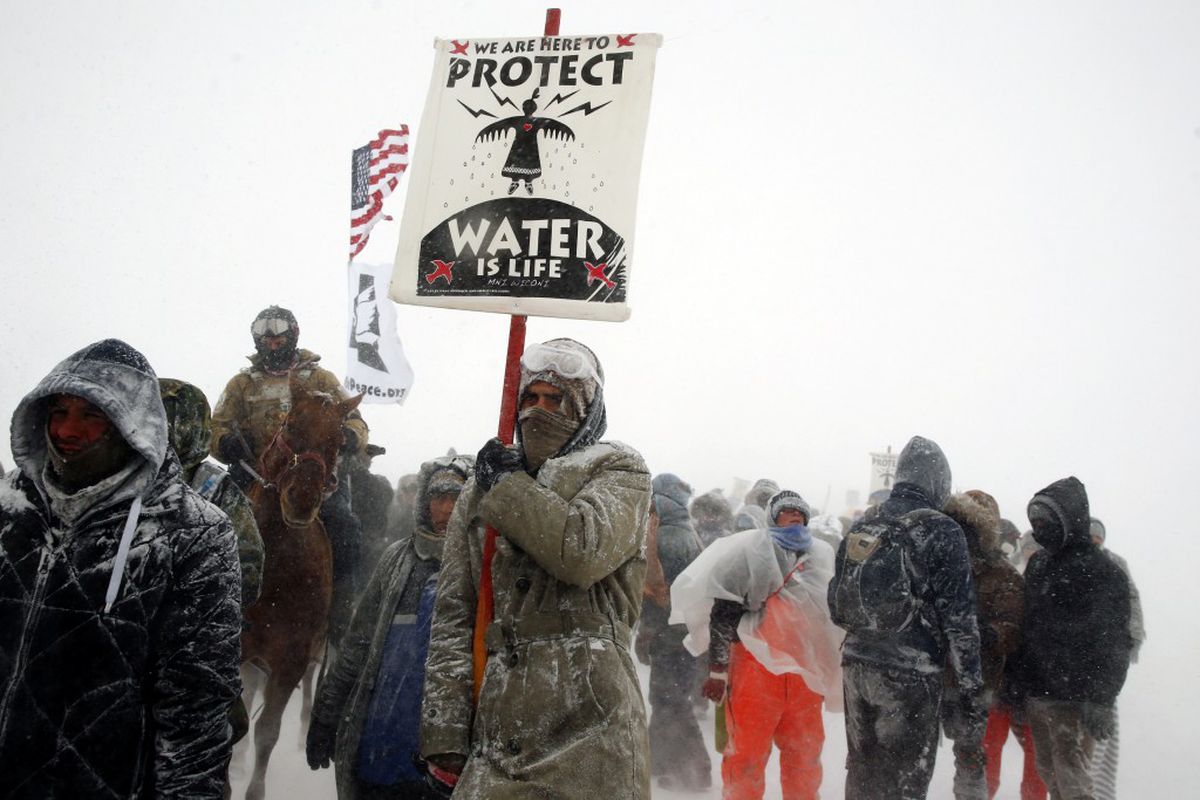 Veterans join activists in a march just outside the Oceti Sakowin camp during a snowfall as “water protectors” continue to demonstrate against plans to pass the Dakota Access pipeline adjacent to the Standing Rock Indian Reservation, near Cannon Ball, North Dakota, December 5, 2016. REUTERS/Lucas Jackson

Veterans join activists in a march just outside the Oceti Sakowin camp during a snowfall as “water protectors” continue to demonstrate against plans to pass the Dakota Access pipeline adjacent to the Standing Rock Indian Reservation, near Cannon Ball, North Dakota, December 5, 2016. REUTERS/Lucas Jackson

CANNON BALL, N.D. – Thousands of protesters in North Dakota celebrated the federal government's ruling against a controversial pipeline but girded for a protracted struggle as President-elect Donald Trump's transition team said on Monday it supports the project and would review it after he takes office.

Standing Rock Sioux Chairman Dave Archambault said in an interview with Reuters on Monday that he hopes to speak with Trump about the Dakota Access Pipeline.

He said non-Sioux protesters could go home because no action was likely until late January after Trump takes office.

The company building the pipeline, Energy Transfer Partners, said late on Sunday that it had no plans to reroute the line, and expected to complete the project.

The U.S. Army Corps of Engineers said on Sunday it rejected an application for the pipeline to tunnel under Lake Oahe, a reservoir formed by a dam on the Missouri River.

Native Americans and activists protesting the project have argued that the 1,172-mile Dakota Access pipeline would damage sacred lands and could contaminate the tribe's water source.

Late on Sunday, Energy Transfer Partners said in a joint statement with its partner Sunoco Logistics Partners that it does not intend to reroute the line and called the Obama administration's decision a "political action."

Protesters at the Oceti Sakowin camp in Cannon Ball, North Dakota, were upbeat after the Army Corps of Engineers announcement but expressed trepidation that the celebration would be short-lived.

"This is a temporary celebration. I think this is just a rest," Charlotte Bad Cob, 30, of the Pine Ridge Reservation in South Dakota, said on Sunday. "With a new government it could turn and we could be at it again."

Hundreds of U.S. veterans have joined the protesters. Several veterans at the camp told Reuters they thought Sunday's decision was a tactic to get protesters to leave. They said they had no plans to leave because they anticipate heated opposition from Energy Transfer Partners and the incoming administration.

The pipeline is complete except for a 1-mile segment that was to run under Lake Oahe, which required permission from federal authorities.

The U.S. Army Corps of Engineers said it would analyze possible alternate routes, but any other route is likely to cross the Missouri River.

Tom Goldtooth, a member of the Lakota people from Minnesota and co-founder of Indigenous Environmental Network, said he expected Trump to try to reverse the decision.

"I think we're going to be in this for the long haul. That's what my fear is," he said.

The chief executive of ETP, Kelcy Warren, donated to Trump's campaign, while the president-elect has investments in ETP and Phillips 66, another partner in the project.