In Rex Tillerson, a State Department candidate steeped in oil and deals 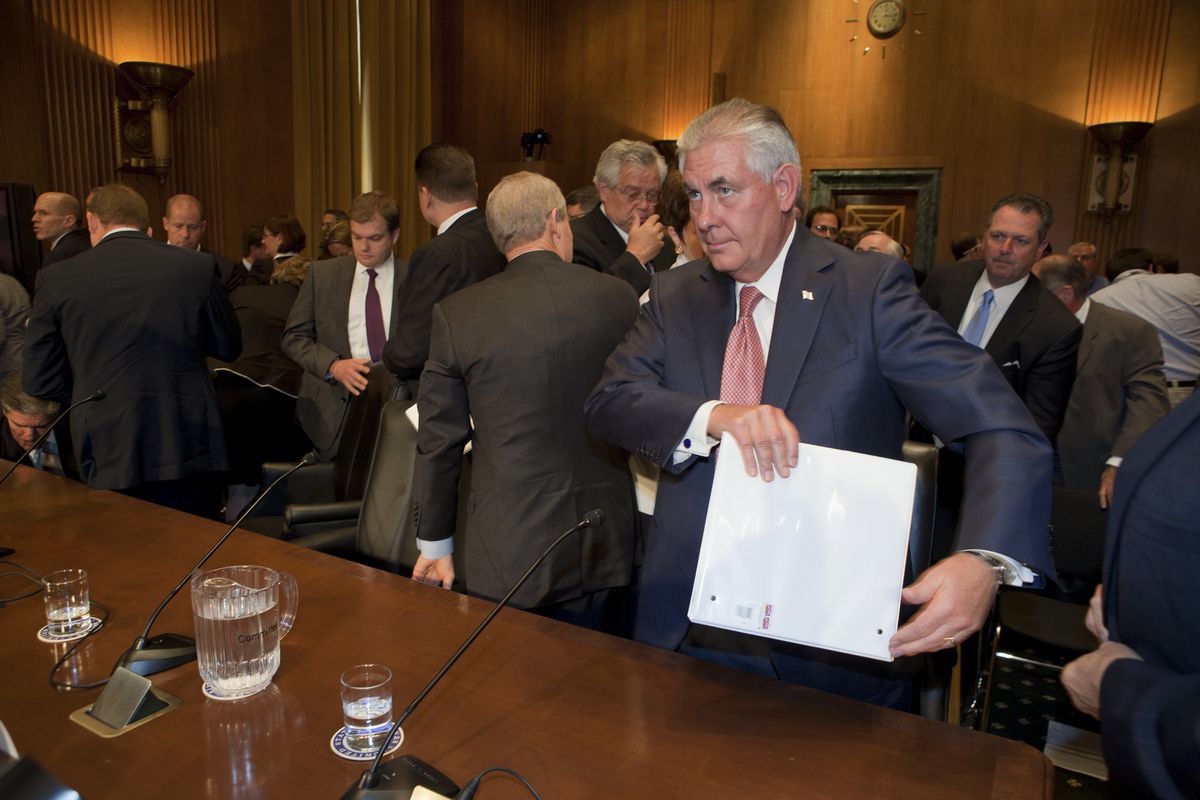 Rex Tillerson, the chief executive of Exxon Mobil, testifies on Capitol Hill in Washington, May 12, 2011. Tillerson, whose extensive deal-making for the energy giant has plunged him into global politics from Yemen to Russia, is expected to be offered the secretary of state post this weekend by President-elect Donald Trump, according to two people close to Trump’s transition team. (Stephen Crowley/The New York Times)

Rex Tillerson, the chief executive of Exxon Mobil, testifies on Capitol Hill in Washington, May 12, 2011. Tillerson, whose extensive deal-making for the energy giant has plunged him into global politics from Yemen to Russia, is expected to be offered the secretary of state post this weekend by President-elect Donald Trump, according to two people close to Trump’s transition team. (Stephen Crowley/The New York Times)

HOUSTON — Twenty years ago, as Rex W. Tillerson was rising through the ranks at Exxon, he was charged with negotiating with the government of Yemen to build a natural gas export plant. The talks got bogged down over Yemen's insistence that it have veto power over important business decisions.

Tillerson, at one point, flew into a rage, throwing a 5-inch-thick book across the room and storming out, perhaps for dramatic effect. Yemeni negotiators and other representatives of other oil companies partnering with Exxon in the international consortium looked on in bewilderment.

In the end, Yemen got at least some of its demands. But that kind of hard-charging determination to bend others' will could be exactly what Presidential-elect Donald Trump is looking for in a secretary of state. It is also the kind of unconventionality that could open up Tillerson to closer scrutiny in Senate confirmation hearings, particularly when it comes to his close relations with Russia.

"He's much more than a business executive," Trump said of Tillerson in an interview with Fox News on Sunday, without confirming that Tillerson would be the ultimate choice. "He's a world-class player."

To make a fresh start with Russia, as Trump promised during the campaign, there may not be a better envoy than Tillerson, 64, who has made a career at Exxon — and Exxon Mobil since the 1999 merger — by drilling more fossil fuels out of Russian soil and has even been decorated for his friendship with the country.

The United States and Russia are quarreling these days in ways rarely seen since the collapse of the Soviet Union. Ukraine and Syria are just two of several hot spots where the countries have clashing interests, and United States intelligence has concluded that Russia covertly tried to undercut the very essence of U.S. democracy by hacking computers and selectively leaking information to hurt Hillary Clinton and promote Trump's presidential campaign.

Tillerson's clever maneuvering in Russia at a time of growing tensions with the West was amply shown in 2014, shortly after the United States and its allies applied sanctions on Russia for meddling in Ukraine. President Barack Obama asked U.S. business leaders not to attend a major business forum in Russia that May, and Tillerson obeyed the president's wishes.

But Tillerson, Exxon Mobil's chief executive, still found a way to get a seat at the table. He sent his company's top exploration official in his place. The official, Neil W. Duffin, signed an agreement to promote more business with state-owned Rosneft to expand joint drilling in the Arctic Ocean, develop shale fields with new technologies and cooperate on a gas export plant in Siberia.

Tougher sanctions eventually froze the growth of Exxon's activities in Russia, but Tillerson had once again proved his commitment to doing business with the country's president, Vladimir Putin.

"Tillerson will be an incredible and effective messenger for a U.S. reset because he is not a member of the foreign policy establishment but also because his history embodies the investment potential Russia could enjoy with a better relationship with the United States," said David L. Goldwyn, who was the State Department's top energy diplomat during the first Obama administration.

Of Trump, Goldwyn said: "He has definitely decided to do a reverse Nixon and side with Russia against China. He thinks we probably can make common cause with Russia in Syria but also in Libya, and he doesn't have a problem supporting strongmen."

Russia may be Tillerson's strength, but it could also ultimately be his Achilles' heel. The Russian government gave him the country's Order of Friendship decoration in 2012, an award that could now well be an embarrassment.

Sen. Marco Rubio, R-Fla., said Sunday on Twitter, "Being a 'friend of Vladimir' is not an attribute I am hoping for from a Secretary of State."

Tillerson has opposed sanctions on Russia, which are the single greatest obstacle to foreign investment in that country. Russia has two enormous areas for new oil development, in the Barents Sea and the Bazhenov shale field in western Siberia, that are essentially closed to development because of a lack of foreign capital and expertise. Exxon was poised to invest in both areas before the sanctions.

Exxon operates in about 50 foreign countries, and Tillerson has relationships far and wide. Energy experts say he is particularly well versed in the affairs of Angola, Argentina, Canada, Mexico, Nigeria and Qatar.

"My impression is he is a first-rate corporate diplomat," said Chase Untermeyer, who was U.S. ambassador to Qatar in the George W. Bush administration. "In my day in Qatar, he would come and go for meetings with the most senior leadership of the country."

But environmentalists and human rights groups have already reacted to the likely appointment with alarm, saying Tillerson would send the wrong message on the United States' commitment to curbing climate change because he has spent his entire professional career at a fossil-fuel-producing company.

Also likely to come up at confirmation hearings would be Tillerson's potential interest in seeing Exxon succeed in Russia and elsewhere in the future. According to company filings this year, Tillerson owned $218 million in company stock, and his pension plan was worth nearly $70 million.

Raymond C. Offenheiser, president of Oxfam America, an anti-poverty organization, said his group questioned how Tillerson would "balance the pressure to transact short-term deals against his larger responsibility to strengthen the rules and institutions that protect economic hope and fundamental human rights for so many on the planet."

Tillerson is not always easy to define. Deeply conservative and committed to the Boy Scouts of America, he quietly pushed the organization to be open to gay rights. But under his leadership, Exxon was slow to adopt explicit policies protecting gay employees from discrimination.

Although reputed to be a decisive leader with a long view, he appeared slow to grasp the full potential of the United States' shale gas revolution.

Exxon executives, speaking confidentially because they were not authorized to discuss the potential nomination, argued that Tillerson had pushed for more research on advanced biofuels, carbon capture and sequestration, and carbon taxes to reduce greenhouse emissions. Tillerson has also moved the company toward acknowledging climate change as a serious problem, although he has strongly defended the company amid investigations by several state attorneys general into allegations that the company took public positions skeptical of climate change when its own scientists were warning of the risks of burning fossil fuels.

Tillerson's opposition to sanctions for Russia made sense given Exxon's interests there, supporters say.

Exxon has been active in Russia for decades, and it has various joint ventures with Rosneft inside and outside Russia.

Western sanctions against Russia have hurt the company, costing it as much as $1 billion by some estimates. The company is unable to collect revenue from an investment in an oil and gas consortium that operates off Sakhalin Island or develop other unconventional projects, like Arctic offshore and shale drilling.

Tillerson's strong suit could be his knack for getting his way in negotiations.

He can be expected to encourage the permitting of the Keystone XL pipeline, which would deliver more oil from the Canadian oil sands to U.S. refineries. Having just successfully bid for a deepwater drilling block off the coast of Mexico, and understanding the importance of Mexico as a growing natural gas export market, he can also be expected to try to smooth relations with Mexico City.

Some energy experts say Tillerson could encourage Trump to support the international climate accord negotiated in Paris last December, but with added emphasis on the benefits of natural gas and ways to bury carbon waste.