Tillerson's Exxon has billions at stake over Russia sanctions 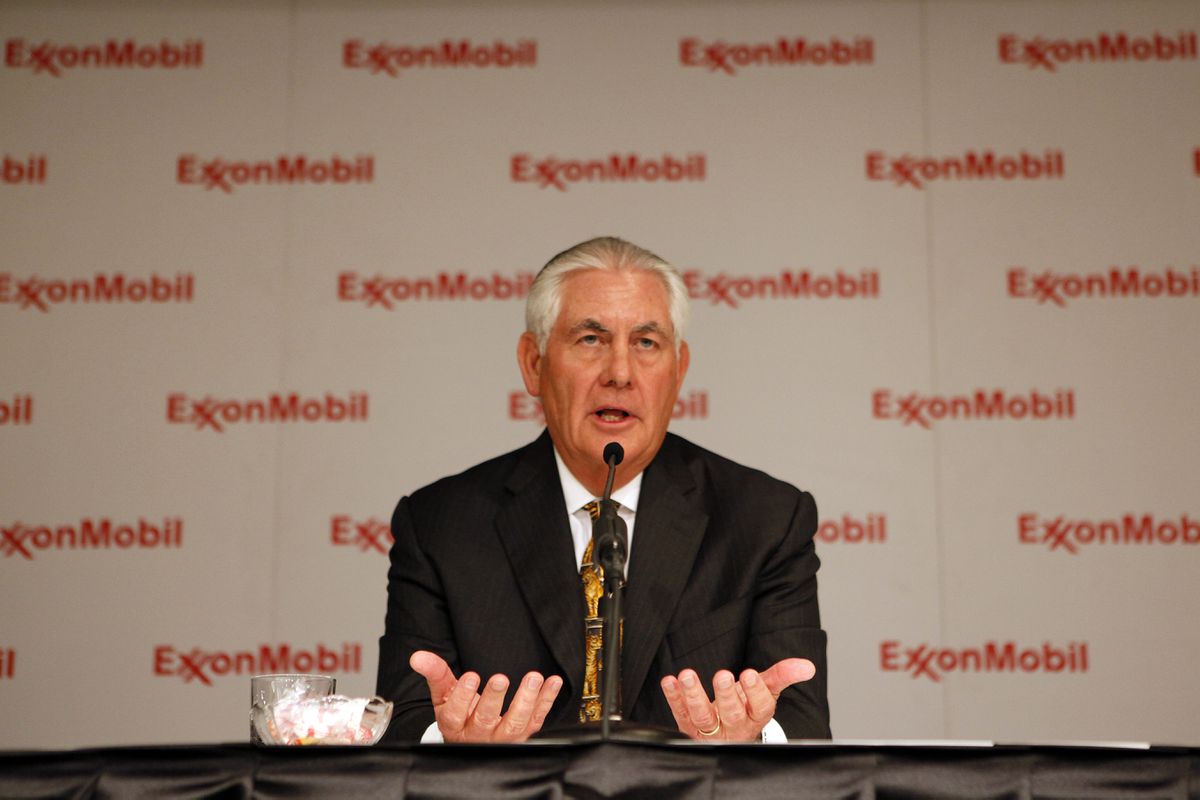 Rex Tillerson, chairman and chief executive of Exxon Mobil, speaks during a news conference in Dallas, May 25. Russia’s energy industry could create a blurry line between Tillerson’s interests as an oilman and his new job if he becomes America’s leading diplomat. (Ben Torres/The New York Times file)

Rex Tillerson, chairman and chief executive of Exxon Mobil, speaks during a news conference in Dallas, May 25. Russia’s energy industry could create a blurry line between Tillerson’s interests as an oilman and his new job if he becomes America’s leading diplomat. (Ben Torres/The New York Times file)

MOSCOW — Now that President-elect Donald Trump has chosen Rex W. Tillerson, chief executive of Exxon Mobil, to be the next secretary of state, the giant oil company stands to make some major gains as well: It has billions of dollars in deals that can go forward only if the United States lifts sanctions against Russia.

As head of America's largest oil company, Tillerson has earned a friendship award from Russia and voiced skepticism about American sanctions that have halted some of Exxon Mobil's biggest projects in the country.

But Tillerson's stake in Russia's energy industry could create a very blurry line between his interests as an oilman and his role as America's leading diplomat.

"The chances that he will view Russia with Exxon Mobil DNA are close to 100 percent," said Robert Weissman, president of Public Citizen, a public interest group based in Washington.

[In Rex Tillerson, a State Department candidate steeped in oil and deals]

A tall, strapping Texan, Tillerson guided Exxon's entry into the sharp-elbowed oil politics of Russia after the breakup of the Soviet Union. He has praised the country for its vast potential as an oil supplier ever since, developing close ties to the Kremlin leadership along the way.

Exxon Mobil has various projects afoot in Russia that are allowed under U.S. sanctions. But others have been ground to a halt by the sanctions, including a deal with the Russian state oil company to explore and pump in Siberia that could be worth tens of billions of dollars.

Russian officials have optimistically called the agreement a $500 billion deal.

As for Tillerson personally, he is scheduled to retire from Exxon Mobil next year. According to company filings this year, Tillerson owned $218 million in company stock, and his pension plan was worth nearly $70 million.

Russia was already a focus of concern after the CIA said the Kremlin had intervened in the U.S. presidential election to help Trump's candidacy. Now Tillerson's career is igniting a debate over the blending of business and politics — and whether that could tip the scales in Russia's favor on major policy decisions like the sanctions.

Speaking in Moscow on Monday, Carter Page, a supporter of Trump who described his former work for the Trump campaign as pulling together "new ideas" on foreign policy, said he was excited that Tillerson would probably put more of an emphasis on private sector business opportunities in relations between Russia and the United States.

"What makes me excited about new possibilities is the chance to really work on new things to improve more from a business standpoint," Page said at a news conference.

Others were much warier of a Tillerson appointment.

"As secretary of state, he would be called upon to negotiate with world leaders like Vladimir Putin," said Michael T. Klare, a professor at Hampshire College and the author of "The Race for What's Left," which delves into the rush for oil in the thawing Arctic.

"In these negotiations, one has to wonder what would influence the types of deals he is making," Klare said. "Questions arise over whether his actions would be benefiting his company or the interests of the United States and its allies."

Trump has called Tillerson a "player." At an annual meet-and-greet for corporate chieftains with President Vladimir Putin at the St. Petersburg economic forum, Tillerson was a regular, his silver coiffure bobbing in the crowd of former spies who have become Russian government and corporate officials and now host the event.

Along with other American chief executives, Tillerson skipped the forum in 2014 to conform to White House pressure to isolate Russia, and Exxon Mobil executives insist they obey the sanctions.

"We follow the law," said Alan Jeffers, an Exxon Mobil spokesman. "If a law says that a U.S. corporation is not allowed to participate in activities in a particular jurisdiction, that's what we do."

The sanctions are intended to put economic pressure on Russia for its lethal intervention in eastern Ukraine, with the aim of forcing the Russian leadership to change course.

Still, Tillerson has made his criticism of the U.S. policy clear.

At Exxon's 2014 annual meeting, Tillerson said: "We do not support sanctions, generally, because we don't find them to be effective unless they are very well implemented comprehensibly, and that's a very hard thing to do. So we always encourage the people who are making those decisions to consider the very broad collateral damage of who are they really harming."

Then, during a question-and-answer period at a Houston conference in early 2015, Tillerson noted his company looked forward to the sanctions' being lifted.

"We'll await a time in which the sanctions environment changes or the sanctions requirements change," he said of blocked Exxon Mobil projects.

Tillerson's approach in Russia tracks what Robert Amsterdam, a lawyer for the Russian tycoon Mikhail B. Khodorkovsky, who had been jailed, described as "the geopolitics of signaling" to the Kremlin, a skill of survival and success for Western oil executives in Russia.

"Exxon has been willing to engage in practices that make it a first-round contender for new Russian assets," Amsterdam said. "The way you do that is coming as close to the line as humanely possible to support the Russians," without breaking the law.

Western sanctions were first enacted on Russia in March 2014 in response to the Russian annexation of Crimea. Then the United States and its allies, including the Netherlands, implicated Russia in the shooting down of Malaysia Airlines Flight 17 over eastern Ukraine in July. All on board were killed, including 193 Dutch people heading to Asia for vacations and work, flying for a just few moments over a war zone.

That prompted tighter sanctions. A month later, Russian tanks entered eastern Ukraine, turning the tide against the forces of the U.S.-backed Ukrainian central government. Today, about 300 U.S. soldiers rotate through Ukraine as trainers.

After the Russian incursion in 2014, the United States prohibited the transfer of advanced offshore and shale oil technology to Russia. The U.S. government announced on Sept. 12 that year that Exxon was to halt all offshore drilling assistance to Rosneft, the Russian state oil company, by Sept. 26.

But Exxon Mobil's high-tech rig was already drilling in the Kara Sea, in an unfinished $700 million project that had yet to find oil. It would be worthless if not completed.

Russian executives then told Exxon Mobil that Russia's security services would fly in a Russian crew — in essence seize the rig — if Exxon Mobil complied with the U.S. law and left without completing the well, according to an oil company executive who had visited the rig in the Arctic.

Exxon relayed the threat to the U.S. government, and the Treasury Department capitulated, granting an extension that stretched the window to work until Oct. 10. In a statement in 2014, the Russian state oil company denied conveying such a threat to Tillerson's company.

With the extension in hand, Exxon Mobil discovered a major field with about 750 million barrels of new oil for Russia a few weeks later. Igor I. Sechin, chief executive of the Russian state oil company, called the newly discovered oil field Pobeda — Russian for victory.

It is one of the Arctic developments that Exxon Mobil has rights to work on should be the sanctions be lifted.