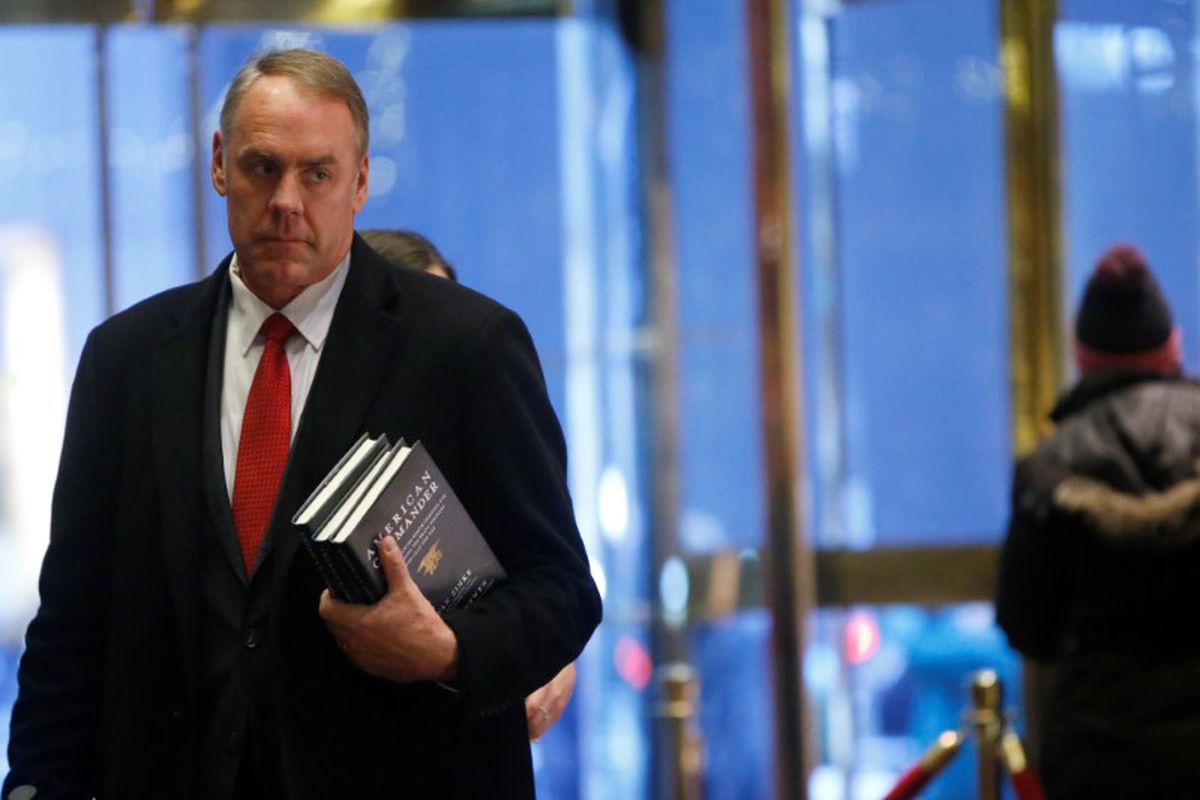 President-elect Donald Trump has tapped Republican Rep. Ryan Zinke, who has represented Montana's at-large congressional seat for one term, to serve as secretary of the Department of the Interior, according to an individual with firsthand knowledge of the decision.

Zinke, who studied geology as an undergraduate at the University of Oregon and served as a Navy SEAL from 1986 to 2008 before entering politics, campaigned for his House seat on a platform of achieving North American energy independence. He sits on the House Natural Resources Committee as well as the Armed Services Committee.

A lifelong hunter and fisherman, the 55-year-old Zinke has defended public access to federal lands even though he frequently votes against environmentalists on issues ranging from coal extraction to oil and gas drilling. This summer, he quit his post as a member of the GOP platform-writing committee after the group included language that would have transferred federal land ownership to the states.

"What I saw was a platform that was more divisive than uniting," Zinke said at the time. "At this point, I think it's better to show leadership."

Trump also opposes such land transfers, but the provision made it into the official Republican platform.

Zinke recently criticized an Interior Department rule aimed at curbing inadvertent releases of methane from oil and gas operations on federal land as "duplicative and unnecessary."

"Clean air and clean water are absolute top priorities when we talk about responsible energy development, however the final rule issued by the Obama administration does nothing to further protect our resources," he said in a statement. "This rule is a stark reminder that we need to invest in infrastructure projects like the Keystone pipeline, so we don't need to flare excess gas."

During his time in Congress, Zinke has established a 3 percent voting score with the League of Conservation Voters. But he has broken ranks with the panel's GOP majority on occasion, opposing a measure by Rep. Don Young, R-Alaska, that would have allowed each state to buy up to 2 million acres in U.S. Forest Service land to boost timber production. He has also pushed for full funding of the Land and Water Conservation Fund, a high priority for outdoors groups.

Land Tawney, president and chief executive of the Montana-based Backcountry Hunters and Anglers, described Zinke on Tuesday as "a straight shooter" who has established credibility with outdoors enthusiasts in the state. During a recent meeting with him at a distillery in Whitefish, the congressman's hometown, Zinke walked into the place in flip-flops.

"You wouldn't know he's a congressman," Tawney said. "He really prides himself on being a Theodore Roosevelt Republican, and he lives that a little bit more than other people."

Outdoors activities such as mountain biking and skiing are a major economic driver in Whitefish as well as in Montana overall, where roughly 200,000 residents have big-game hunting licenses and 300,000 have fishing licenses. Zinke, who has been endorsed by the Outdoor Industry Association, has embraced that sector of the state's economy.

"Hunting and fishing isn't something we do in Montana, it's a way of life," said Tawney, a fifth-generation Montanan.

Theodore Roosevelt Conservation Partnership President Whit Fosburgh, whose hunters and anglers group has worked with Zinke, said in an interview that it would be "very supportive of Ryan Zinke" as a Cabinet nominee.

"He's shown courage and commitment to public lands and conservation and [is] someone we think would be an excellent secretary of interior," Fosburgh said.

Still, a slew of environmental groups came out Tuesday against Zinke, who opposes safeguards President Barack Obama's administration has provided for temporary wetlands and intermittent streams, as well as its temporary moratorium on coal leasing on federal land. While he supported subsidizing renewable energy programs and climate change legislation before being elected to the House, during a 2014 debate he said of climate change, "It's not a hoax, but it's not proven science either."

[Scientists are copying US climate data, fearing it might vanish under Trump]

"Zinke embodies the worst kind of magical thinking in Congress: that government welfare handouts can save dying coal companies and crumbling oil and gas giants," Greenpeace climate campaign specialist Diana Best said Tuesday. "The fact is, coal demand is shrinking globally, and people across America want a Department of the Interior that will protect our precious public lands in perpetuity. That means keeping them off-limits to fossil fuel production and recognizing that the world is moving forward."

Kierán Suckling, executive director of the Center for Biological Diversity, said the congressman's "brief political career has been substantially devoted to attacking endangered species and the Endangered Species Act," while the National Parks Conservation's president, Theresa Pierno, said he "has repeatedly voted to block efforts to designate new national parks that would diversify the National Park System."

While some Democrats are likely to oppose Zinke's nomination, the pick does provide the party with one bit of good news: It removes a possible challenger to Sen. Jon Tester, the Montana Democrat who likely will face a tough reelection bid in 2018.

Although Rep. Cathy McMorris Rodgers, R-Wash., was a leading contender to lead Interior in recent days, Zinke hit it off with Trump's oldest son, Don Jr., an avid hunter, and met personally with the president-elect on Monday in New York.

In a Facebook post Tuesday evening, McMorris Rodgers wrote, "It was an honor to be invited to spend time with the President-elect, and I'm energized more than ever to continue leading in Congress as we think big, reimagine this government and put people back at the center of it."