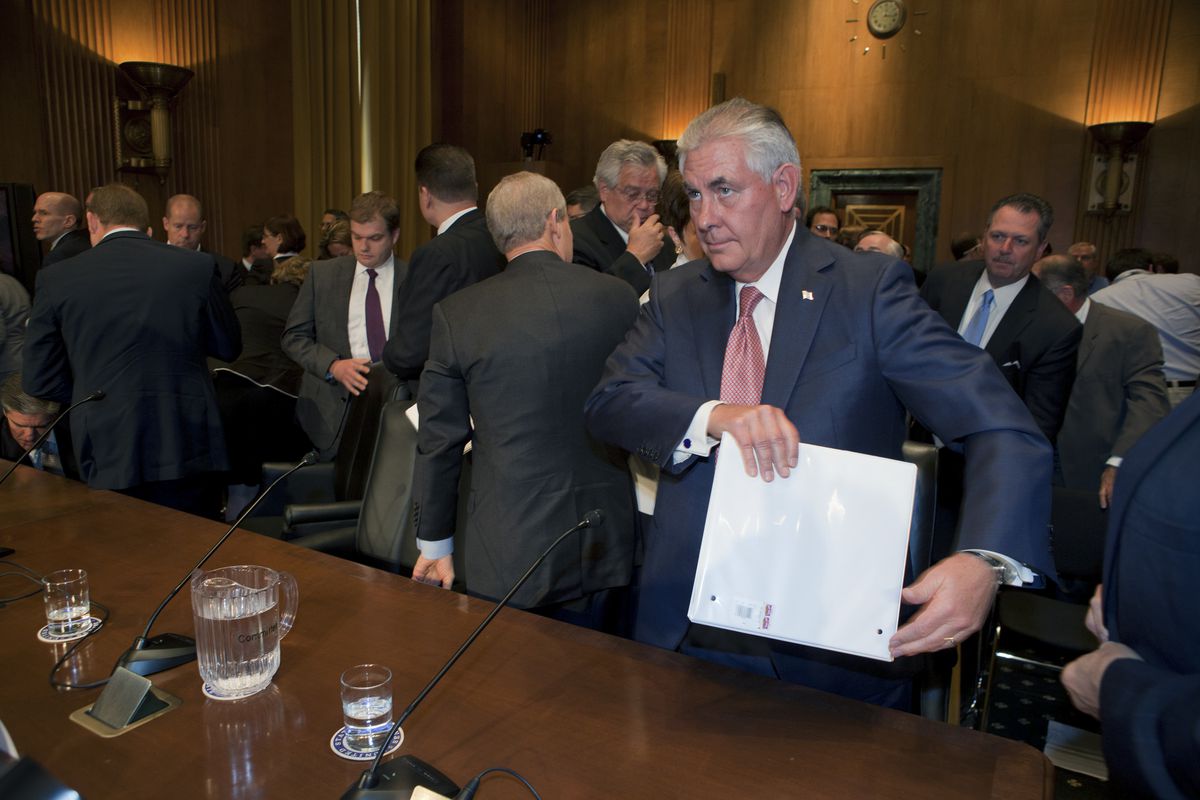 MOSCOW — As a member of the U.S.-Russia Business Council and chief executive of Exxon Mobil, Rex Tillerson frequently voiced doubts about Russia's investment climate, saying as recently as 2008 that Russia "must improve the functioning of its judicial system and its judiciary. There is no respect for the rule of law in Russia today."

This past February, however, Tillerson, President-elect Donald Trump's choice to be the next secretary of state, was sounding a very different theme, telling students at the University of Texas that he has "a very close relationship" with President Vladimir Putin of Russia.

In the intervening years, oil industry experts and other analysts say, as Putin consolidated his control over Russia's oligarchs, Tillerson underwent a profound change of outlook. He came to realize that the key to success in Russia, a country deeply important to Exxon's future, lay in establishing personal relationships with Putin and his friend and confidant, Igor Sechin, the powerful head of Rosneft, the state oil company.

And as Tillerson and other oil executives pivoted from the private sector to the state oil company, the criticism that they had directed toward the Kremlin dried up. The payoff for Exxon was immense: a $500 billion joint venture in 2011 to drill for oil on the Arctic shelf and the Black Sea and another huge deal to develop shale oil deposits in Siberia. Those projects were shelved in 2014, after the West imposed sanctions on Russia for Putin's actions in Crimea and Ukraine.

"This was a man who was deeply skeptical of Russia, and a person who gave every appearance of being unwilling to commit his firm's famous reputation for sharp investment decisions and careful financial management to the risks of dealing in an anarchic environment," said Bernard Sucher, a former Russia director of Merrill Lynch. But with the Arctic deal, "Tillerson had done a 180 on what I understood his views to be."

Tillerson's personal relationships with Putin and Sechin are expected to undergo microscopic scrutiny during what are anticipated to be rocky Senate confirmation hearings in January. Senate critics, especially rivals of Trump, have voiced suspicions about Tillerson's Russia ties, not least because Putin pinned an Order of Friendship medal on Tillerson's suit not long after he signed the Arctic deal.

Senators will also explore the question of how Tillerson negotiated the narrow line between his interests and those of the United States. Tillerson can expect to be grilled on how he maintained access to Russia and its vast oil reserves at a time when Washington was trying to isolate Moscow. They will want to know to what extent U.S. interests took a back seat to those of a company that is the source of his roughly $300 million personal fortune in stock and stands to reap tens of billions if sanctions are lifted.

From roughly 2010 to 2014, every significant global oil company was vying for a piece of the action, and the Russian government handed out various blocks to keep them all in the game. Nobody got a piece quite like Exxon Mobil, however, and a diplomatic offensive that Tillerson spearheaded is credited.

"Exxon was without question the biggest winner, and I think it was because they developed these personal relationships," said Michael McFaul, the U.S. ambassador to Russia from 2012 to 2014.

In the constant quest to divine the thinking of Putin, McFaul recalled in an interview, the U.S. Embassy in Moscow kept track of Americans who enjoyed seemingly unfettered access to the Russian leader in his Kremlin palace. The three names atop that informal list in the years right before the Ukraine crisis were Henry Kissinger, Steven Seagal — the action star emeritus whom Putin recently handed a Russian passport — and Rex Tillerson.

Tillerson flew in at least twice a year, the ambassador said, especially while the company was negotiating the Arctic deal. Various participants laughingly referred to it as "the biggest partnership ever in the history of capitalism," McFaul said.

In many ways, Tillerson, 64, embodies the corporate ethos of Exxon Mobil. The son of a professional Boy Scout leader in Wichita Falls, Texas, he received an engineering degree from the University of Texas. He joined the company immediately after graduation in 1975, working his way up to one of the most powerful corporate posts on the planet. Former Exxon executives noted that he even fit the mold of a Texas oilman — physically imposing, with a resonant voice and a drawl.

Tillerson changed that somewhat by hiring former diplomats and other country specialists with geopolitical expertise to serve as his main liaison officers with leaders like Putin. The current country director, Glenn Waller, is a former Australian diplomat.

Canny emissaries are particularly valuable in Russia, where the ease with which the Kremlin bends the legal system means companies cannot rely on the law to protect property rights.

[Tillerson's Exxon has billions at stake over Russia sanctions]

Exxon executives learned that lesson in 2003, when they were negotiating to buy a stake in what was then the largest private oil company in Russia: Yukos. They had barely backed out when the owner of Yukos, Mikhail Khodorkovsky, was arrested and his company nationalized. He spent much of the next decade in a Siberian penal colony. Khodorkovsky blamed his fall on Sechin, then a relatively unknown presidential aide.

Sechin, often described today as the second-most powerful man in Russia, excels at the dark, brutal, high-stakes infighting obscured behind the Kremlin walls, where he comes across as a kind of fearsome enforcer of domestic politics in business.

Seeing where the power lay, Exxon, like virtually all the other major oil companies, turned to Sechin for deals, McFaul said, adding: "They saddled up with Sechin and put their bets on him."

"In many respects Exxon Mobil and Rex Tillerson himself was the model for what Sechin was trying to do with Rosneft," McFaul said.

Both Putin and Sechin initially were suspicious of Exxon. Lacking experience in the West, both men tended to view every Western entity as doing the government's bidding.

The elements were in place for a strong relationship. Russia was in need of advanced technology to develop oil and gas fields in some of the most treacherous conditions on Earth. Exxon, a pioneer in Arctic exploration, badly needs foreign fields to maintain production, even after spending tens of billions on exploration and development in recent years. Russia's Arctic waters hold as much as 190 billion barrels of oil, according to Rosneft's website.

But things got off to a rocky start. In 1996, the Russians reluctantly signed three production-sharing agreements, then tried to renegotiate. Shell and Total agreed. Exxon refused despite significant Russian pressure. Tillerson's tenacity won a certain grudging respect from the Russians, Milov said.

But it was not Tillerson's charm, guile and toughness alone that won the day for Exxon. It was also Sechin. "They found a partner in the form of Rosneft, and this allowed them to establish a successful partnership," Milov said.

Putin, by many accounts, came to enjoy the company of corporate chieftains who, like Russia's domesticated tycoons, learned not to risk their prospects over policy criticism.

"He will circle them, beguile them, subordinate them to his desires," said Nikolai Kovarsky, an adviser to the organizing committee of the St. Petersburg Economic Forum. "If you are a CEO, why not pretend you agree, if you can make some money? It's not moral, but we don't live in a world of morality."

[In Rex Tillerson, a State Department candidate steeped in oil and deals]

The Exxon charm offensive deepened as the Arctic stakes came into play. Tillerson invited Sechin to the United States in April 2012, celebrating him on Wall Street and at the Exxon corporate campus in Texas.

"Sechin can feel the warmth and the firm grip of Tillerson," Kovarsky said. "He sees, 'He is like me, a real man, running a huge company.' You cannot get those ties with Obama."

The developing ties were suddenly impaired in 2014, with the imposition of economic sanctions that were particularly damaging to Exxon Mobil. While the company has said repeatedly that it has scrupulously followed U.S. law, Tillerson has made no secret of his opposition to the sanctions.

During the Ukraine crisis, the U.S. government made it clear that it expected its corporate citizens to stay away from Russia's premier business forum, held in St. Petersburg.

Tillerson complied for two years, but he was back in St. Petersburg in June. The warmth between him and Sechin was on display as Tillerson fielded questions about sanctions and technology.

"As to the sanctions question, I will use the same approach that my friend Mr. Sechin took, and that is a question for the government," he said to widespread laughter, while Sechin, sitting on the panel, gave him a warm grin and a thumbs up. "So if there is a U.S. government official here who would like to respond, I am happy to toss it to them."

The U.S. government was not happy with the visit, noted McFaul, who was a staunch supporter of Hillary Clinton and critic of Trump. "They were disappointed that he went this year. It sent the wrong signal in terms of what they are trying to achieve."

Of course, it sent exactly the opposite signal to the Russians. "He made it very clear that he was still an important partner," McFaul said. "That was a show of solidarity, and that stuff matters."