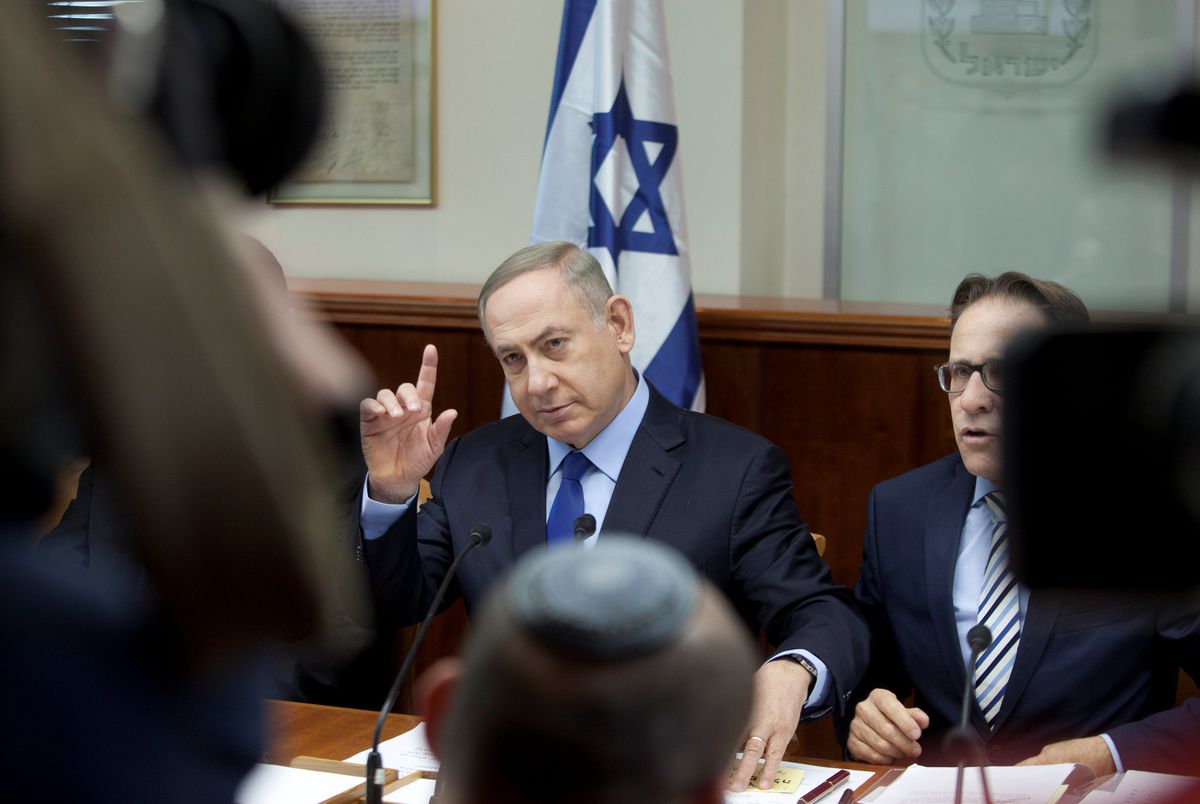 JERUSALEM – Israeli Prime Minister Benjamin Netanyahu lashed out Saturday at what he called the "old-world bias against Israel," attacking President Barack Obama and the United Nations over a resolution that criticized Israel's settlement activity in the West Bank and East Jerusalem.

Netanyahu compared Obama with former U.S. president Jimmy Carter, whom he called hostile to Israel and the last president to break with U.S. commitments to support the state. Those who try to harm Israel will pay a high price, the prime minister said, adding that Israel would fight to cancel Friday's resolution.

"The resolution is distorted. It states that the Jewish quarter and the Western Wall are occupied, which is absurd," said Netanyahu, referring to holy Jewish sites that sit within the Old City in East Jerusalem.

Netanyahu balanced his harsh words about Obama with his most explicit statement yet in enthusiastic anticipation of Obama's successor, Donald Trump.

Israeli leaders on Saturday seemed to be counting down the days to Trump's Jan. 20 inauguration, hoping he will offer a more sympathetic approach to Israel and bring an end to what one senior minister called Obama's support for "Palestinian intransigence, incitement, violence and terror."

Later Saturday, the U.S. president-elect tweeted that the United Nations action "will make it much harder to negotiate peace. Too bad, but we will get it done anyway!"

The resolution, which was brought for a vote Friday in the U.N. Security Council, declared that settlements built on land Israel has occupied since the 1967 Arab-Israeli war have "no legal validity" and are a threat to the possibility of creating two states – one for Israelis and one for Palestinians.

The 15-member council passed the resolution 14 to 0, with the United States, in a break from standard practice, abstaining rather than vetoing. It was the first resolution adopted by the council on Israel and the Palestinians in nearly eight years.

The vote also sparked strong reactions among U.S. lawmakers. On Saturday, Sen. Lindsey Graham, R-S.C., told CNN he will ask Congress to rescind funding for the United Nations unless it repeals the resolution on settlements.

"If you can't show the American people that international organizations can be more responsible, there is going to be a break," Graham said. "I can't support funding a body that singles out the only democracy in the Middle East who shares our values."

In a statement after the vote, Netanyahu said the Obama administration had "not only failed to protect Israel against this gang-up at the U.N., it has colluded with it behind the scenes."

He called the resolution shameful and said Israel would not abide by its terms.

For the first time since the U.S. election, Netanyahu stated clearly that he looked forward to working with Trump, "to negate the harmful effects of this absurd resolution."

Netanyahu and his ministers have generally refrained from making public statements about Trump, but subtle words and gestures have suggested that the Israeli leadership is buoyed by the new administration.

They now seem eager to see the back of Obama, who has clashed regularly with Netanyahu over numerous issues, especially the settlements.

Roughly 400,000 Jewish settlers live on 125 settlements and 100 outposts in the Israeli-occupied West Bank. Over the past six months, Israel has announced plans to add hundreds of units to existing settlements in the West Bank and East Jerusalem, each time drawing rebuke from the White House.

Trump, on the other hand, has indicated he might bring a fresh approach to the Israeli-Palestinian conflict. Last week, he nominated a close adviser and outspoken supporter of Israel's settlements, New York lawyer David Friedman, as ambassador to Israel. And on Thursday, he tweeted that "The resolution being considered . . . should be vetoed."

The potential change in direction might explain why there was such urgency to bring the resolution to a vote Friday, as well as the U.S. decision not to veto it.

A White House official, speaking on condition of anonymity about the sensitive internal discussions, said the Security Council vote was preceded by months of back-and-forth discussions about numerous draft resolutions in circulation.

The official said the White House would not back any measure that delegitimized Israel or imposed a solution on the two parties, and would veto any resolution that omitted mention of Palestinian incitement to violence and terrorism.

Late Wednesday night, President Obama spoke by phone with advisers including Vice President Joe Biden, Secretary of State John Kerry, national security adviser Susan Rice and Samantha Power, the U.S. ambassador to the United Nations. Obama said he was open to abstaining from a vote on an Egyptian resolution scheduled for Thursday.

But the Egyptians withdrew their resolution after President Abdel Fatah al-Sissi spoke with Trump, who had been approached by worried Israeli officials.

New Zealand, Malaysia, Venezuela and Senegal stepped in and sponsored their own settlements resolution. On Friday morning, Obama authorized an abstention. It was relayed to Power through Rice.

Following the vote, Netanyahu ordered diplomatic steps against the countries that had brought the resolution and with whom Israel has diplomatic relations.

He instructed Israel's ambassadors in New Zealand and Senegal to immediately return to Israel and canceled a planned visit to Israel by the Senegalese foreign minister scheduled for next month. He also suspended Israeli aid programs in Senegal.

In Cairo, Sissi's government was left struggling to defend its actions, after first sponsoring the resolution and then withdrawing it. Although it ultimately voted in favor, Egypt drew criticism at home and in the Arab world for giving the appearance it had folded in the face of Israeli pressure.

After the resolution passed Friday, the country's representative to the United Nations said the decision to withdraw had been "procedural" and was taken because of "pressures that the draft has met."

Among Palestinians, as well as Arab countries seen as friendly to Israel, the resolution was viewed as a victory.

Saeb Erekat, a former peace negotiator and the No. 2 in the Palestine Liberation Organization, said the vote was a "clear and unanimous message" to Netanyahu that "your policies will not achieve peace and security for Israel or the region."

In Gaza, Hamas spokesman Fawzy Barhoum said: "Hamas appreciates the position of the countries that voted in the Security Council for the right of the Palestinian people (to live) on their land," Agence France-Presse reported.

Israeli leaders across the political spectrum, however, criticized the U.N. decision.

"I strongly oppose this harsh resolution, which is a strategic defeat for Israel," opposition leader Isaac Herzog said, according to the Israeli newspaper Haaretz. Speaking on Israeli television Saturday, he laid the blame for the defeat on Netanyahu's foreign policy.

Israel Katz, a senior government minister from Netanyahu's ruling Likud party said Obama had "reached a new low when he turned his back on America's ally Israel."

"Obama's decision at the end of his presidency to abandon the political umbrella which the United States has traditionally provided Israel in the Security Council will unfortunately only deepen the Israeli public's distrust and allow the Palestinians to continue to evade responsibility," he said.