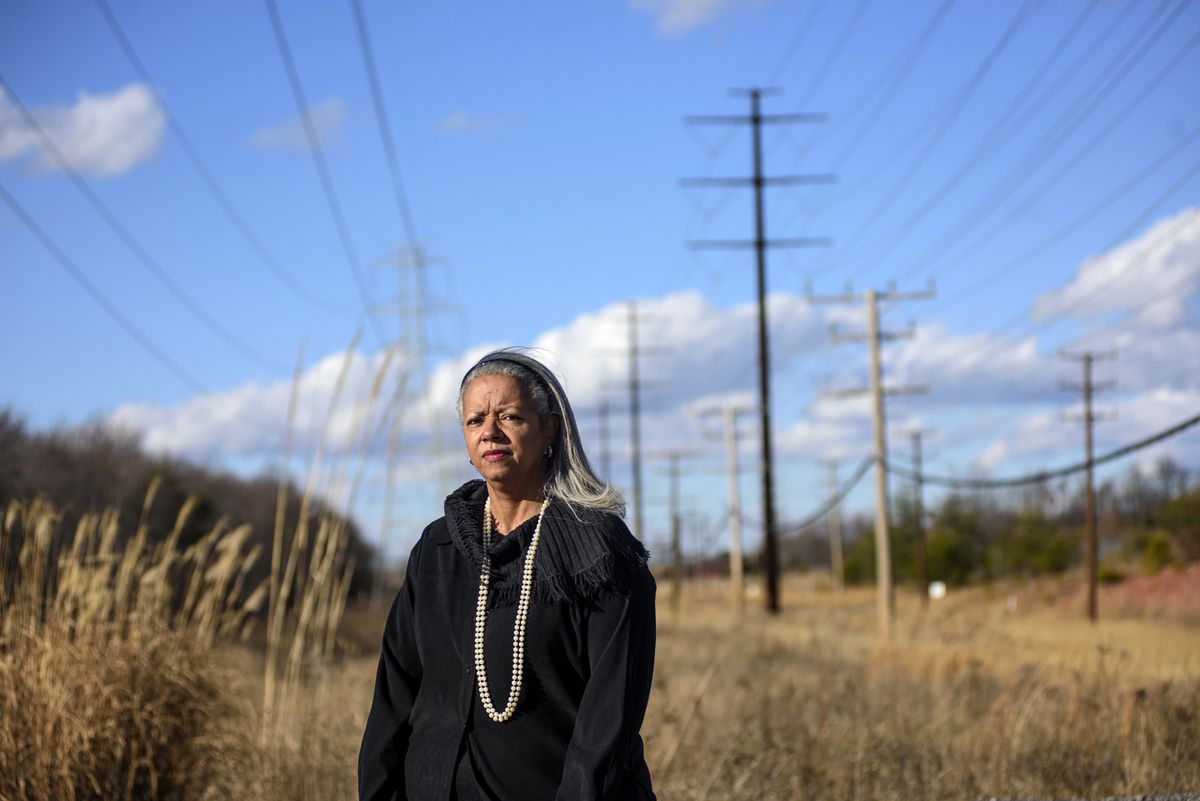 Linda Haithcox, executive director of the National Policy Alliance, which is funded in part by the billionaire Koch brothers’ organization, in Baltimore on Jan. 4. The Kochs, whose promotion of climate-change denial research has angered environmentalists, are quietly courting new allies in their quest for a fossil fuel resurgence: minorities. (Matt Roth/The New York Times)

Linda Haithcox, executive director of the National Policy Alliance, which is funded in part by the billionaire Koch brothers’ organization, in Baltimore on Jan. 4. The Kochs, whose promotion of climate-change denial research has angered environmentalists, are quietly courting new allies in their quest for a fossil fuel resurgence: minorities. (Matt Roth/The New York Times)

The crowd that thronged a gospel concert last month in Richmond, Virginia, was in for an unusual Christmas treat.

"Your energy bill's paid!" the MC declared between soaring numbers from recording artists like VaShawn Mitchell and Charles Jenkins, calling to a young woman from the audience, who shrieked and started twirling on the floor.

Although few in the crowd knew it, the concert had a powerful sponsor: Fueling U.S. Forward, a public relations group for fossil fuels funded by Koch Industries, the oil and petrochemicals conglomerate led by ultraconservative billionaire brothers David H. and Charles G. Koch. About halfway through the event, the music gave way to a panel discussion on how the holidays were made possible by energy — cheap energy, like oil and gas.

The concert flier was adorned with a red car bearing Christmas gifts. "Thankful for the fuels and innovation that make modern life possible," it read.

The Kochs, whose use of their fortune to promote climate-change denial research has angered environmentalists, are quietly courting new allies in their quest for a fossil fuel resurgence: minorities.

Since its start in spring 2016, Fueling U.S. Forward has sent delegates to, or hosted, at least three events aimed at black voters, arguing that they benefit most from cheap and abundant fossil fuels and have the most to lose if energy costs rise.

[How much will really change for the West's oil and gas industry under Trump?]

Fueling U.S. Forward is "dedicated to educating the public about the value and potential of American energy, the vast majority of which comes from fossil fuels," the group says on its website. "We'll talk to people of diverse backgrounds — industry employees, small-business owners, community leaders and low-income families — and share their stories."

The group has seen early results from its outreach.

"Policies that subsidize electric vehicles and solar panels for the wealthy raise energy prices and harm the black community," read recommendations adopted by delegates at the National Black Political Convention in Gary, Indiana, in August. The event brought together African-American political groups and counted Fueling U.S. Forward among its sponsors.

"We're standing up for poor, underserved communities," said Linda Haithcox, executive director of the National Policy Alliance, which organized the convention. She said her group's funding from Fueling U.S. Forward and other energy groups had not affected its position on energy.

In a statement, Charles Drevna, president and chief executive of Fueling U.S. Forward and a former vice president at Sunoco, the company behind the Dakota Access oil pipeline, confirmed that the group was supported by Koch Industries, among other backers.

"I am proud to help Fueling U.S. Forward promote the importance of domestic oil and natural gas to making people's lives better," he said.

A Koch Industries spokesman, David Dziok, did not respond to a request for comment.

The Kochs' public relations drive takes a page from minority outreach by other industry lobbies, like those representing tobacco and soft drinks. Those industries have long argued that stiffer regulations or taxes on cigarettes or sodas would disproportionately affect low-income and minority communities.

It also adds a new dimension to the Kochs' more traditional approach to climate and the environment, which has mainly involved financing research skeptical of climate change, backing pro-oil politicians and ballot initiatives, and fighting incentives for renewable energy, all through a network of charitable and political organizations.

"How do we start winning hearts and minds?" Alex Fitzsimmons, the Fueling U.S. Forward spokesman, wondered in a Facebook Live broadcast he hosted with Drevna in August at the RedState Gathering in Denver.

Eddie Bautista, executive director of the NYC Environmental Justice Alliance, a nonprofit that works with low-income and minority neighborhoods on environmental issues, called the campaign "an exploitative, sad and borderline racist strategy." He pointed to the falling costs associated with renewable energy, which he said made shifting away from reliance on fossil fuels a winning proposition for everyone.

In seeking to change hearts and minds, Fueling U.S. Forward addresses a greater conundrum for the Kochs, their private empire — which generates an estimated $100 billion in sales per year — and the wider fossil fuel industry.

In recent years, the industry has increased its sway among Republicans, supporting a rightward shift toward sharp cutbacks of Social Security and Medicare and the rollback of environmental protections. And the Kochs find themselves well positioned to influence the Trump administration, with many allies in important Cabinet and transition posts.

President-elect Donald Trump's nominee to lead the Environmental Protection Agency, Scott Pruitt, attorney general of Oklahoma, has received contributions from Kochpac, the political action committee of Koch Industries. Trump tapped Pruitt after entrusting the agency's transition to Myron Ebell, who is a director at the Competitive Enterprise Institute, an advocacy organization that has received funding from the Kochs' charitable foundations, and who has been hostile to the work of the EPA.

But numerous polls show that a majority of U.S. voters continue to support many environmental regulations, including those that govern carbon dioxide emissions. And there is significant support among voters, even in red states, for renewable sources like wind and solar, which the Kochs have long worked to quash.

Fueling U.S. Forward seeks to narrow that schism by courting public support. The group is set to air ads in Virginia and Indiana, the news site Environment & Energy reported in September. The ads portray fossil fuels as the driver of human progress.

"This moment we're in didn't just happen. We didn't just arrive here by luck — a world where billions of people have greater opportunities came about through years of progress," a preview posted on the group's site states. In the backdrop is video of people driving, turning on lights and plugging in appliances.

We got here, the ad says, by "harnessing the power of the earth and the natural fuels of soil and rock."

It remains unclear who else, apart from the Kochs, is financing Fueling U.S. Forward. It is registered as a nonprofit business association, a designation that allows its involvement in lobbying and political activities. But because it is still so new, it has not yet made public filings detailing its financial and other activities.

Fueling U.S. Forward's outreach to minorities builds on work by two Koch-funded organizations, the Libre Initiative and Generation Opportunity, that have focused on Latinos and millennials. The Kochs have also previously reached out to black organizations on issues related to criminal justice reform.

The group has even experimented with outreach to the kind of left-wing audience that has long vilified the Kochs. In his Facebook Live broadcast, Drevna specifically addressed those critics, inviting them to see fossil fuels as part of a progressive worldview.

On Dec. 14, Fitzsimmons, the Fueling U.S. Forward spokesman, got an article published on The Atlantic's website that promoted fertilizers made from natural gas, a product made by a Koch subsidiary. Fitzsimmons, who wrote the article, was initially described only as an energy policy analyst based in Washington.

After being contacted by The New York Times, The Atlantic said that though Fitzsimmons had disclosed his affiliation with the group, it had not been aware of his role as spokesman, and it appended an editor's note to the article. Fueling U.S. Forward has featured the article prominently on its Facebook page and Twitter feed, emphasizing that it appeared in The Atlantic..

The group's outreach to African-Americans has been more overt and involved multiple members of the Kochs' network.

Drevna attended the August conference in Gary alongside Horace Cooper, a fellow at the conservative National Center for Public Policy Research, who gave a speech on energy policy, organizers said.

Later that month, Drevna gave a speech on fossil fuels at an annual training forum in Atlantic City, New Jersey, organized by Blacks in Government, a national organization for black civil service employees that the Koch-funded group sponsors.Drevna was accompanied by James Mahoney, a Koch Industries board member, and the two appear in a photo taken at the event.

The Richmond gospel concert was organized by Fueling U.S. Forward, the nonprofit Reaching America and Radio One, which caters to black listeners.

Representing Fueling U.S. Forward was Hubbel Relat, a former vice president at the American Energy Alliance, which has received funding from Freedom Partners, a central group in the Koch network.

He discussed what high energy costs could mean for households in Richmond, which has a large African-American population. And he encouraged audience members to contact their legislators to lodge concerns about energy costs, according to Clovia Lawrence, a local journalist and radio personality who helped host the show.

Then four lucky people picked from the crowd of about 300 were told that their latest monthly electricity bills would be paid, up to $250, she said.