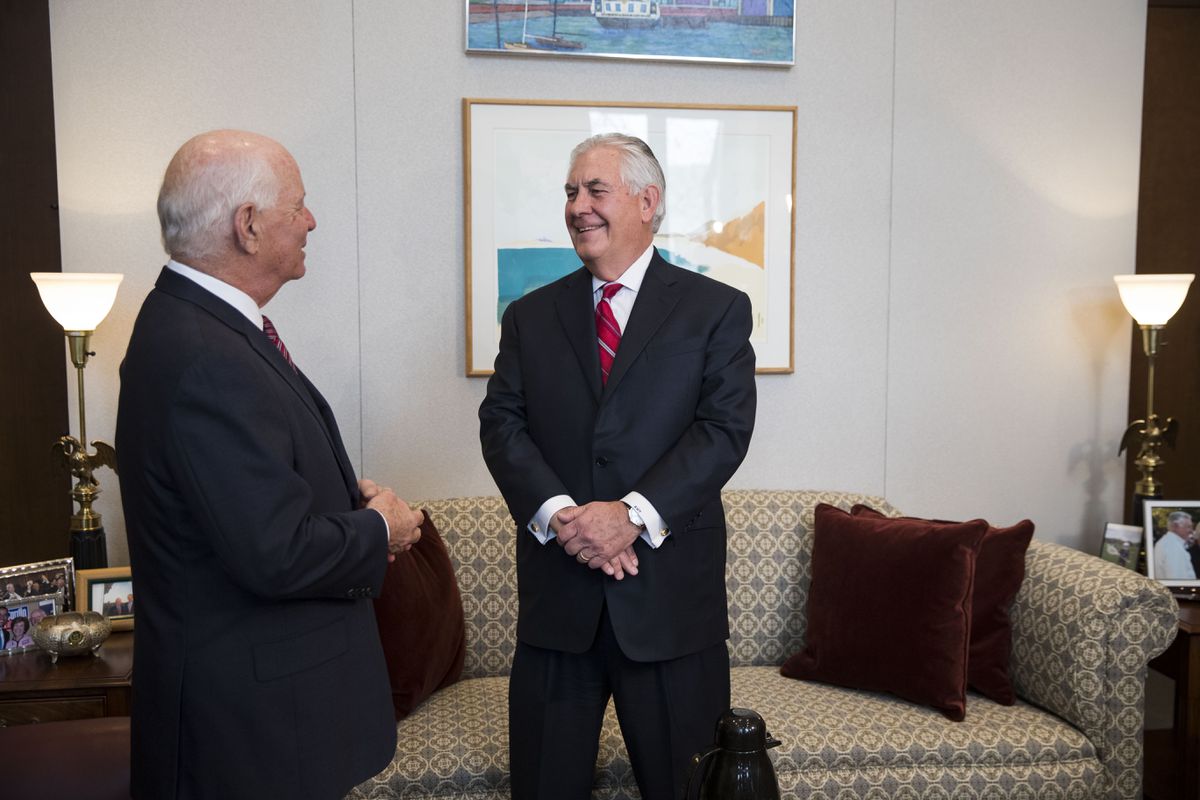 WASHINGTON — Rex W. Tillerson owns more than $50 million of Exxon Mobil stock, has earned an annual salary of $10 million and holds a range of positions — from director at the Boy Scouts of America to the managing director of a Texas horse and cattle ranch.

But Tillerson is prepared to resign from all those posts, sell all his stock and put much of his money into bland investments like Treasury bonds if he becomes secretary of state, according to an "ethics undertakings" memo he filed this week with the State Department. And, if he returns to the oil industry in the next decade, he could lose as much as $180 million.

The nine-page ethics letter detailing Tillerson's commitments is the first of hundreds that will be made public in the coming weeks by members of President-elect Donald Trump's Cabinet and other top political appointees, presenting a historic test of the federal government's ability to identify conflicts of interest — and figure out ways to avoid them.

Trump has selected what would be the wealthiest Cabinet in modern U.S. history, filled with millionaires and billionaires with complicated financial portfolios. Tillerson is worth at least $300 million, but is hardly the richest among them: Wilbur L. Ross Jr., the commerce secretary nominee; Betsy DeVos, the education secretary nominee; and Steven T. Mnuchin, the Treasury secretary nominee, each hold assets estimated at more than $1 billion.

Jared Kushner, Trump's wealthy son-in-law, is in the process of submitting his own forms as he prepares to take a formal White House position, people involved in the process said.

"The Office of Government Ethics is stressed, no doubt about that," said Robert Rizzi, a partner at Steptoe & Johnson, who represents half a dozen Trump administration nominees going through the process, although he would not name them, citing confidentiality agreements. "They are having some difficulty keeping up."

[Trump, Cabinet could avoid millions in taxes thanks to this little-known law]

All the Cabinet appointees and hundreds of others must submit a financial disclosure report detailing all the assets they own, their approximate value and income from any source they have made in the past year. Some of the nominees are so wealthy — and their assets so varied — there are not enough boxes on the standard form for them, lawyers involved in the process said.

At the same time, this class of wealthy incoming officials could save hundreds of millions of dollars in income tax payments, thanks to a special tax benefit created so that affluent Americans do not avoid federal government jobs.

The Trump administration, lawyers involved in the effort said, is behind where it should be in this process of disentangling conflicts of interest. This is partly a reflection of the extraordinary complexity of negotiating such conflict of interest agreements for incoming government officials worth hundreds of millions, or even billions, of dollars.

"Usually, you just own a bunch of stocks and bonds, but he's getting people that own buildings and real estate and stuff you can't sell," said Alan Johnson, a New York-based compensation consultant. "He has Wilbur Ross, who is probably involved in a gazillion different things. I think it is going to be very complicated to try to disentangle all of these things."

Ross is a billionaire investor and former banker who made a fortune in steel, coal, telecommunications and other industries.

Under federal law, executive branch employees, including Cabinet members, are prohibited from using their positions in the government to enrich themselves, meaning they are not allowed to participate in any particular matter that might directly financially benefit assets they own.

The best way to avoid such a conflict, said Lawrence M. Noble, former general counsel at the Federal Election Commission, is to sell any assets — like Exxon Mobil stock or any individual company stock — and put proceeds into Treasury bonds or mutual funds.

"We don't want the decisions that these individuals make to be influenced — in reality, or even appearance — by their own financial interests," Noble said. "They are working for the American people, and not to enrich themselves or their families."

[In break with precedent, Obama ambassadors told by Trump team to quit by Inauguration Day]

The rules do not apply to the president and vice president, although ethics experts — and even the Office of Government Ethics — have urged Trump to divest his assets voluntarily to rid himself of potential concerns as he takes over the White House. He has thus far resisted such a move, saying he plans to let his two oldest sons and other Trump Organization executives manage the business, perhaps with an outside monitor.

For appointees like Tillerson, the transition to government can have lucrative benefits: They can take advantage of measures in the tax code meant to be an incentive for wealthy people to consider public service jobs. The measure was put in place during the administration of President George H.W. Bush.

This tax benefit, which requires case-by-case approval by the Office of Government Ethics, allows government officials to defer paying capital gains taxes on certain assets that they must sell to clear potential conflicts as they take office — essentially providing them with interest-free loans. To gain the tax advantage, the liquidated proceeds must then be invested in Treasury bonds, mutual funds or exchange-traded funds, and the official must seek a certificate of divestiture.

Until now, Henry Paulson, Treasury secretary under President George W. Bush, has been the most prominent example of a public official who has taken advantage of the divestiture certificate. In 2006, Paulson left Goldman Sachs and sold an estimated $500 million in Goldman stock, deferring taxes on the sale.

In his memo, Tillerson suggested he was likely to seek such a certificate, and laid out a series of plans to divorce himself from financial engagements, board appointments and Exxon Mobil. This means he will most likely avoid capital gains taxes based on his sale of $50 million in Exxon Mobil stock he owns, as well as shares in more than 150 companies including Airbus and the Walt Disney Co., all of which he has promised to sell off within 90 days of his confirmation, his ethics documents suggest.

But a more complicated task involved resolving the fate of 2 million shares of Exxon Mobil stock, worth about $180 million, that Tillerson was set to receive over the next decade.

If he held on to this promised future payout from Exxon Mobil, he would still have a financial interest in matters that might affect the company and the oil industry. So Exxon Mobil agreed to take the unusual step of paying out the value of these sales and putting the money into an independent trust, with the money invested in neutral assets like Treasury bonds and mutual funds.

Under the terms of the agreement, if Tillerson, 64, goes back into the oil industry during the next decade, he will forfeit any money left in the account.

Richard Painter, a White House ethics lawyer during the administration of President George W. Bush, said this provision preventing Tillerson from returning to the oil industry was unusual and positive, as it removes the incentive for him to take steps while in government that might benefit an industry he planned to return to work for upon his departure.

"It gives up something I had never been able to get from other government officials — a promise not to go back to an industry from which you came," Painter said.

Still, some environmental activists say such steps cannot address what they argue will be Tillerson's inherent bias in the State Department.

"It is impossible for this man to remove his career, and frankly his personality, from the oil and gas industry," said Lena Moffitt, director of a Sierra Club campaign trying to reduce the nation's reliance on fossil fuels. "He has been knee deep in this industry for more than four decades."