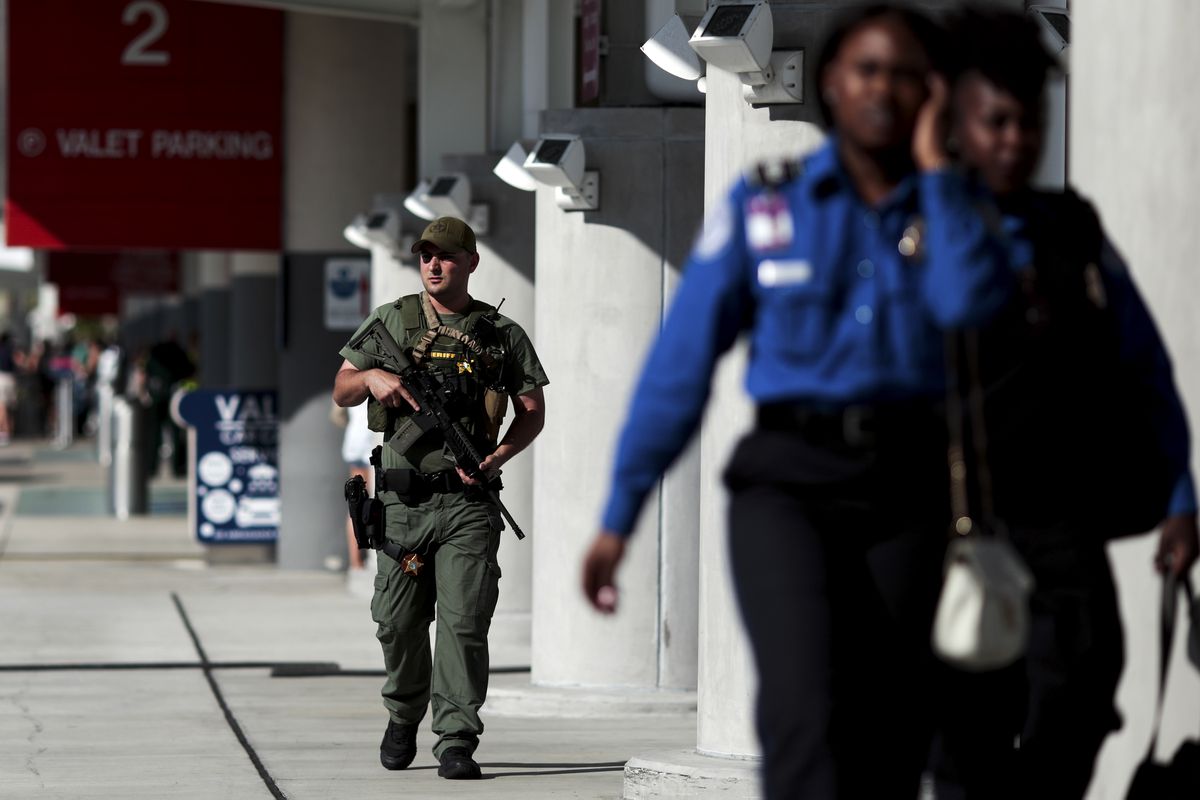 MIAMI — By the time Donald Robertson, a retired architect, arrived at Fort Lauderdale-Hollywood International Airport's Terminal 1 on Friday afternoon, the mass shooting in Terminal 2, which left five people dead, had been over for at least an hour. The accused gunman, Esteban Santiago, was in police custody and the airport had largely returned to its normal rhythm — passengers were noshing, charging their phones, watching television. Things were so sedate that Robertson did not even realize there had been a shooting.

But as he made his way just past the gate, Robertson looked up and saw a "stampede" of people, including what looked like law enforcement agents, racing toward him. "It was tremendous," he said. "It was like a herd reacting. Everyone around me was diving under chairs."

A rumor about a possible second gunman had sprinted across the airport, via social media, news sites and word-of-mouth.

People panicked and the airport was shut down, a turn of events that upended what had seemed like an orderly finale to a tragic event. What followed that single rumor was a rush of terror for passengers as they fled to the tarmac, were separated from loved ones, injured themselves in the tumult, hid in kitchens and storage rooms and hunkered down behind luggage trucks.

Chaos and uncertainty unfolded over the next 12 hours.

Through it all, passengers said, they were frustrated every step of the way by the dearth of information about whether they were safe, where to go once the airport was shut down and how they could retrieve the thousands of items — 23,000 according to a tally by airport officials — that were scattered across terminals.

For the thousands who fled the terminals, seeking refuge on the tarmac or hiding wherever they could, food and water quickly became scarce. Bathrooms were nonexistent.

Passengers on some planes that were either preparing to take off or trying to reach a gate were stuck on board for up to seven hours.

Passengers said that some level of pandemonium is to be expected after a shooting, and they praised law enforcement for the swift response. But it was the aftermath of the rumor, which was debunked relatively quickly, that left them bewildered and angry.

"Nobody gave us information, and as time went on we were treated more and more like suspects," Robertson said, referring to the pat-downs by law enforcement and orders for people to raise their hands as they walked from the airport down side roads. "When they decided to clear the terminal — that created terror."

Sheriff Scott Israel of Broward County said he issued the order to close down the whole airport as a safety precaution after he received information that "perhaps gunfire had happened and an active shooter was in another terminal." At that point, he said, the safety of the people at the airport was paramount, and the only way to be sure they were protected was to seal the airport.

"I made a decision to clear the airport," Israel said in an interview. "I worked with our SWAT team and other SWAT teams to clear the entire airport and the parking garage to make sure we didn't have any other active shooter. It was a voluminous undertaking and we did it, as horrific and horrible as this scene was."

Up until that point, he said, the plan was by the book. "Had the misinformation of the active shooter not surfaced," he said, "we would have had buses to the airport within 30 minutes."

Israel said he could not remember how long it took to confirm there was no second gunman. Authorities debunked the rumor about 30-45 minutes after it had started to spread, raising questions about whether the airport could have just been reopened right away.

By then, law enforcement was already sweeping the airport and garages.

It is still unclear how the rumor began. Several passengers said in interviews that they heard what they believed to be gunshots in Terminal 3, something that sounded like loud pops. Israel said that he was told somebody saw a bloody person and assumed a second gunman was loose.

Providing accurate information to passengers, airport and airline staff also proved challenging. Law enforcement has access to wireless emergency alerts — the system that sends Amber Alerts — but alerts were not used to inform people that the danger had passed or instruct them on what to do next. Some airports have internal communication systems for employees to send important messages. It is unknown whether this was in place at the Fort Lauderdale airport. Instead, news, accurate and otherwise, traveled through word of mouth or was gleaned from cellphones.

"Airports can put out messages to employees, and that is important because passengers will tend to follow directions from uniformed employees in the know," said Douglas Mansel, aviation security manager at Oakland International Airport.

All airports have emergency plans approved by the Federal Aviation Administration, including for active shooter scenarios. The Fort Lauderdale airport's director, Mark E. Gale, was not available to comment on airport protocols or on how events unfolded Friday.

Israel said communication proved tricky. With so many people spread out across different areas, including on the tarmac and in garages, it was hard to get information out.

"I tried to tell as many people verbally," he said. "Communication is critical, but there is no way to communicate to thousands."

Anne Buongiorno, 56, who was visiting from Canada, had to evacuate Terminal 2 twice. The first time, after the shooting, she and her 15-year-old daughter jumped under a seat, their hands over their heads. Her husband was in the bathroom. Terrified, they followed a surge of people down a staircase, but people were shoving one another. She fell down and broke her rib. She and her daughter ended up on the tarmac and were told to lie on the ground near a luggage truck.

A while later, they were told to go back inside. A similar scenario played out all over again as the report spread of the possible second gunman. Buongiorno said she wound up among thousands of people on the tarmac again.

Clusters of people ran back and forth, fleeing what they feared was a threat as the rumor took hold again. Buongiorno hid behind a truck and waited nearly for five hours, before being led to a hangar and later put on a bus for the cruise port. Nobody gave her information about where to go so she found a hotel on her iPad, got in a long line for a cab and went there. The next day, she was back at the airport waiting for word about how to get her belongings and fly back to Canada.

"It was the first time in my life I was so afraid," she said, her voice quavering at the memory. "I'm afraid still. When I heard somebody talk over there, I'm afraid."

Others joined the long line of people who were told to walk out of the airport along a set of railroad tracks, which skirted a marshy area. A few who had tried to avoid the mayhem by jumping a fence were confronted by law enforcement officers with pointed guns. Those who had luggage dragged it along.

Officers sometimes issued contradictory orders, directing people to one location, only to be told by officers there to go back where they came from.

Along the way, law enforcement personnel ordered people to raise their arms and sometimes frisked them as they filed by — a common precaution, security experts said, but one that alarmed some.

"They were patting us down like there was another shooter," said Melody Dorward, 22, of Ohio, who walked the railroad tracks. "I felt traumatized. Not safe."