Trump alleges leaks by US spy agencies, something ‘Nazi Germany would have done’ 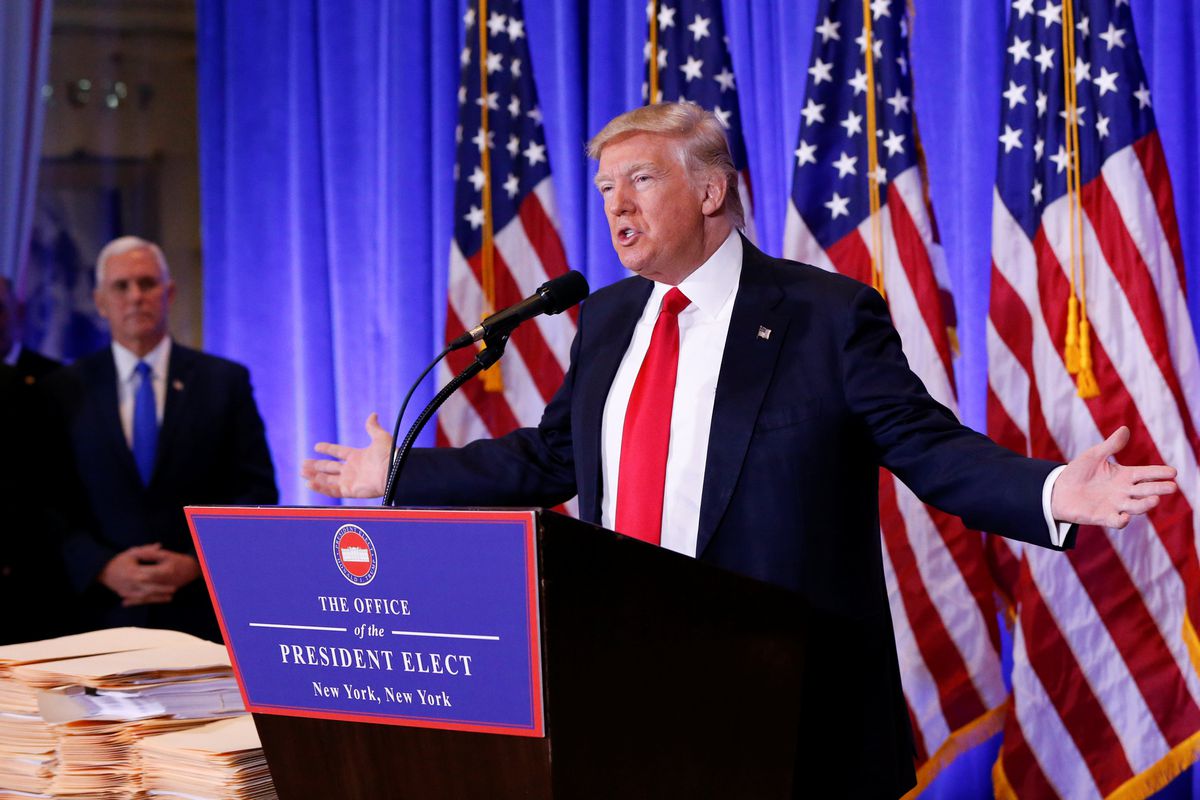 WASHINGTON — President-elect Donald Trump amplified his already heated war with the intelligence community Wednesday, accusing agents of leaking an ugly and unsubstantiated report about him while comparing the tactic to Nazis.

The showdown threatens to further undermine trust between the next commander in chief and America's spies amid heightened threats to national security from terrorist groups and adversaries around the world with powerful new cyberweapons.

Trump, for the first time, acknowledged intelligence findings that Russia hacked Democratic files in an effort to interfere with the election, but he denied that Moscow tried to help him win, while praising President Vladimir Putin and even suggesting that the hack ultimately helped American voters.

"Hacking's bad and it shouldn't be done," he told reporters. "But look at the things that were hacked, look at what was learned from that hacking."

The claim was one of several bizarre moments at a wide-ranging news conference, Trump's first since July, that also touched on his business conflicts, his biggest campaign promises and another of his main foils, the media.

The event went off with a typical level of theatrics: Trump stood in the lobby of Trump Tower in New York next to stacks of file folders, ostensibly containing documents detailing the handover of his businesses to his older sons, though they were acknowledged only as an afterthought. Several other speakers took turns at the lectern, including a tax lawyer, a spokesman and Vice President-elect Mike Pence. Trump briefly argued with a CNN correspondent, refusing to take his question.
Trump was asked to rule out the possibility of contacts between his associates and Russian intelligence agents during the campaign and would not do so. But he lashed out against media organizations that published unverified allegations Tuesday from a report that claimed that Russians had gathered blackmail material against him and that people in his orbit had met with Russian agents during the campaign.

The unsubstantiated information was contained in a 35-page file released Tuesday by BuzzFeed, which said it was publishing the material in the interest of "transparency." No news organization has been able to verify any of the material in the report, which CNN reported was prepared by an outside source. Media reports conflict about whether it was disclosed to Trump and President Barack Obama in intelligence briefings last week.

Trump said it was "sick people" who "put that crap together," including unproven assertions that he encountered prostitutes at a Russian hotel.

"It was disgraceful — disgraceful that the intelligence agencies allowed any information that turned out to be so false and fake out," Trump said. "That's something that Nazi Germany would have done and did do."

Trump continued to dismiss criticism of Russia, much of it waged by members of his own party, over the hacking of Democrats. He noted that China also has breached U.S. government systems and insisted it is not getting the attention it deserves, one of several instances when he was asked about Russia and invoked China instead in his answer.

He praised Russia for denouncing the report that it was gathering blackmail material against him as "pulp fiction." And he insisted that Russians would have released damaging information about him during the campaign if they had it, ignoring the possibility that Putin could hold onto it as leverage and contradicting intelligence officials' conclusions that the Kremlin was specifically trying to aid Trump.

He added that he did not know yet whether he would ultimately get along with Putin.

"I hope I do. But there's a good chance I won't. And if I don't, do you honestly believe that Hillary (Clinton) would be tougher on Putin than me?" he said. "Does anybody in this room really believe that? Give me a break."

Trump spoke positively of improving relations with Russia during his presidency, praising Putin and saying Moscow "can help us fight (Islamic State), which, by the way, is, No. 1, tricky."

Some of those views not only put him at odds with some U.S. intelligence officials but also many Republican members of Congress who call Putin an autocrat who violates human rights and unlawfully invaded Ukraine and annexed Crimea. That tension played out Wednesday on Capitol Hill, where Rex Tillerson, Trump's choice for secretary of State, faced sharp questions during his initial Senate hearing from members of both parties. The former Exxon Mobil chief has had deep business ties in the country.

Florida Sen. Marco Rubio, a Republican who ran against Trump for president, showed particular frustration that Tillerson would not use the term "war criminal" to describe Putin, who has overseen a legion of atrocities in Syria, where Russian troops are aiding the regime.
And while Tillerson criticized Russia's invasion of Ukraine and said policy toward Russia had to be "clear-eyed," he stuck with his opposition to economic sanctions, which he said too often end up hurting U.S. businesses. They have been a key tool for the Obama administration to punish Russia for its incursions into Ukraine.

Another top Trump Cabinet pick will face senators Thursday. Rep. Mike Pompeo, R-Kan., an aerospace entrepreneur and former Army officer whom Trump has selected to lead the Central Intelligence Agency, may be asked how he intends to run an agency that has been openly mocked by his future boss.

CIA leaders in the seventh-floor suites of the agency's headquarters in Langley, Va., are bracing for a confrontation when Trump's team enters the White House. Trump said he has ordered his national security team to launch a 90-day review of the nation's cyber defenses as soon as he takes office. And he roiled intelligence officials when his transition team issued a statement in December knocking down the CIA's assessment that Putin had ordered the hacks in a deliberate effort to damage Clinton and bolster Trump's election prospects.

The rift has grown wide enough that Trump doesn't seem to trust the intelligence briefers to keep their encounters private. During the news conference, Trump said he recently wanted to test whether U.S. intelligence officials were telling reporters about their briefings with him, so he claimed to have met with intelligence officials without anyone in his tightly knit organization knowing.

"Nobody knew, not even Rhona, my executive assistant for years, she didn't know — I didn't tell her," he said. "The meeting was had, the meeting was over, they left, and immediately the word got out that I had a meeting," he said.

Democrats warned that Trump was being shortsighted.

"Trump may think that denigrating the intelligence community is good politics, or a useful way to deflect attention from the gravity of Russia's intervention on his behalf during the election," Rep. Adam Schiff of California, the top Democrat on the House Intelligence Committee, said in a statement.

At some point, Trump may need to rely on intelligence reports to justify military action overseas, he said.
"By casting doubt on their integrity, by mentioning the intelligence community in the same sentence as Nazi Germany, President-elect Trump is undermining the authority and credibility that he will need as president," Schiff said.