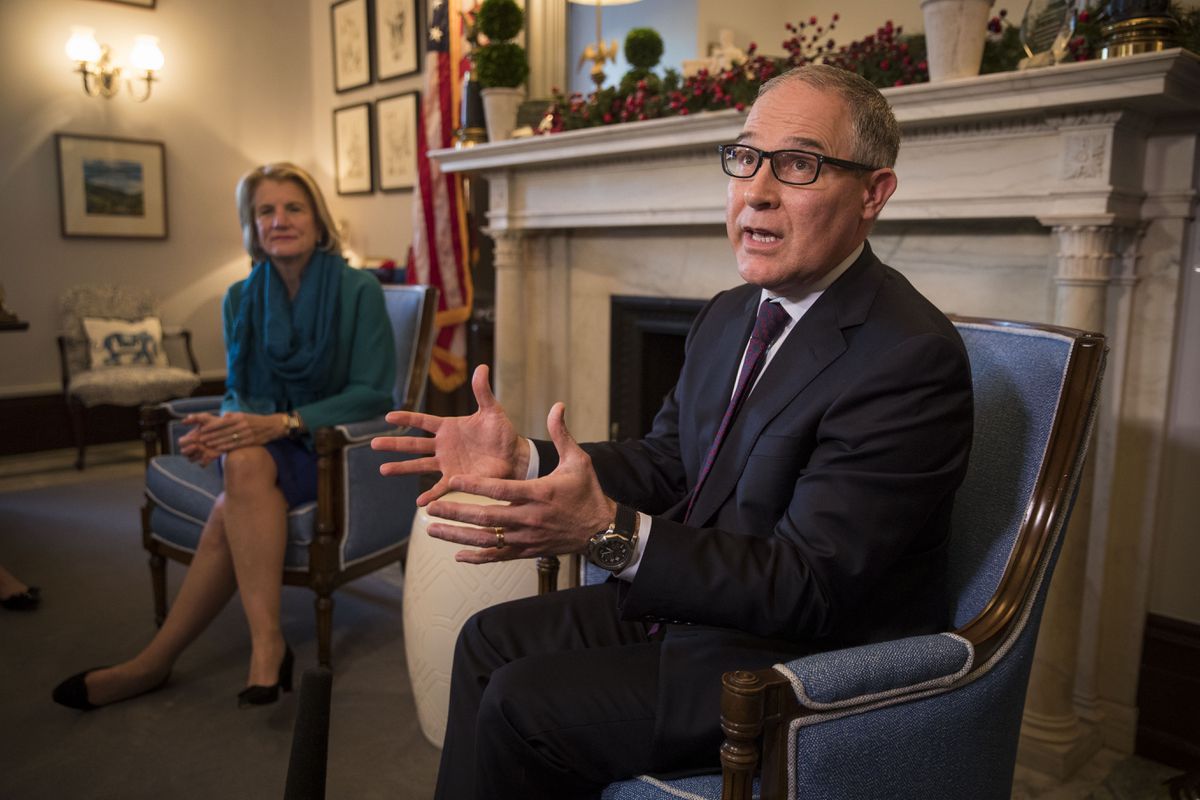 WASHINGTON — A legal fight to clean up tons of chicken manure fouling the waters of Oklahoma's bucolic northeastern corner — much of it from neighboring Arkansas — was in full swing six years ago when conservative lawyer Scott Pruitt took office as Oklahoma's attorney general.

His response: Put on the brakes.

Rather than push for a federal judge to punish the companies by extracting perhaps tens of millions of dollars in damages, Oklahoma's new chief law enforcement officer quietly negotiated a deal to simply study the problem further.

The move came after he had taken tens of thousands of dollars in campaign contributions from executives and lawyers for the poultry industry.

It was one of a series of instances in which Pruitt put cooperation with industry before confrontation as he sought to blunt the impact of federal environmental policies in his state — against oil, gas, agriculture and other interests. His antipathy to federal regulation in many ways defined his tenure as attorney general.

Now, Pruitt, tapped to head Donald Trump's Environmental Protection Agency, will have the opportunity to engineer a radical shift in Washington. If confirmed by the Senate, he is expected to shelve the Obama administration's aggressive environmental enforcement and embrace a more collaborative approach with the industries that the agency is charged with policing, many of which have helped him advance his political career.

The impact would stretch from the nation's waterways to the planet's climate, since the EPA carries out and enforces rules to combat global warming.

"He has advocated and stood up for the profits of business, be it the poultry companies or the energy industry and other polluters, at the expense of people who have to drink the water or breathe the air," said Mark Derichsweiler, who led the Oklahoma Department of Environmental Quality division responsible for overseeing the poultry-related cleanup. Derichsweiler retired in 2015 after 40 years with the state, frustrated with Pruitt's approach.

Pruitt declined a request to comment. But his supporters contend that his record demonstrates a deeply held philosophy that states understand their needs best and should be allowed to regulate their own environment. On Thursday, a coalition of 23 powerful conservative advocacy groups endorsed Pruitt's nomination, in advance of his confirmation hearing, set for Wednesday.

"Some claim Mr. Pruitt opposes clean air and water. This could not be further from the truth," wrote the groups, which include the political action committee Club for Growth; the American Energy Alliance, which has advised Trump on energy policy; and Americans for Tax Reform, the group founded by anti-tax lobbyist Grover Norquist. Pruitt, the endorsement said, "understands that many of the nation's challenges regarding clean air and water are best met at the state and local level."

Pruitt, if confirmed, will take over the agency in an odd position: He has spent the last seven years suing it to block regulations that he would be expected to put into effect and enforce. Some legal scholars say he should recuse himself from major pending environmental matters, while groups like the Environmental Defense Fund are urging Congress to reject his confirmation.

Some experts say that while returning more authority to states can be desirable in some cases, environmental protection is probably not one of them. Smog and toxic chemicals that foul the air and waterways of one state may originate from one or several others, necessitating federal oversight of pollution.

"Pollution doesn't respect state boundaries," said Patrick A. Parenteau, a professor of environmental law at Vermont Law School. "States have limited ability to regulate pollution from outside the state, and almost every state is downstream or downwind from other pollution."

Case in point: the "Green Country" chicken battle that Pruitt inherited in eastern Oklahoma. The phosphorus and nitrates in chicken manure were causing algae blooms in the ponds, streams and lakes of the 1.1 million-acre Illinois River watershed, which reaches from Arkansas into Oklahoma.

In 2005, Attorney General Drew Edmondson of Oklahoma, Pruitt's predecessor, sued Tyson Food, Cargill Turkey and a dozen other major poultry producers for damages caused by the pollution and to force them to change the way they disposed of 300,000 tons a year of animal waste.

As Pruitt ran for election, at least $40,000 in contributions poured into his campaign from nearly 30 executives at poultry companies named in the lawsuit or attorneys at law firms representing them, including Mark Simmons, the founder of Simmons Foods; Donald J. Smith, then the chief executive of Tysons Foods; and Gary Weeks, a lawyer listed on the court papers as representing George's, another company targeted in the lawsuit, according to data assembled by the nonprofit Environmental Working Group and confirmed by The New York Times. That money represents about 4 percent of the total $1 million he raised in the 2010 campaign, records show.

After Pruitt took over, instead of pushing the federal judge for a ruling that, seven years later, still hasn't been issued, he negotiated an agreement with Arkansas and the poultry companies to conduct a study of the appropriate level of phosphorus in the Illinois River.

"Regulation through litigation is wrong in my view," Pruitt told The Oklahoman newspaper in 2015. "That was not a decision my office made. It was a case we inherited."

J.D. Strong, director of Oklahoma's Wildlife Department and the state's former secretary of environment, praised Pruitt for negotiating the settlement.

"You can't force a judge to rule," Strong said. "Pruitt didn't sit back and wait or badger the judge for a ruling. He worked to get the states of Oklahoma and Arkansas around the table."

[Pebble mine developer and EPA want to put lawsuit on hold]

"We'll point out that our employees are encouraged to participate in the election process of public officials at all levels and are at liberty to make personal contributions to any campaign as they see fit," Worth Sparkman, the spokesman for Tyson, said.

Pruitt quietly allowed the expiration of a 2003 agreement that Edmondson helped negotiate with Arkansas to reduce poultry waste pollution — and to monitor the progress — without seeking another formal extension of the deal. And Pruitt shut down the specialized unit of four attorneys and a criminal investigator that had helped initiate the lawsuit against the 14 poultry companies.

That environmental unit had broad jurisdiction, forcing pork-producing farmers to spend millions of dollars on their own cleanups and collecting tens of millions of dollars to clean up toxic sites in the state, including poisonous waste left at an abandoned lead and zinc mine known as Tar Creek.

Pruitt, in response to questions, provided a list of environmental enforcement actions taken during his tenure, but the list includes cases that were largely initiated under Pruitt's predecessor, Edmondson.

A spokesman for Pruitt said that while the environmental unit had been closed, environmental cases continued to be handled by the state solicitor general's unit. "Under the leadership of Attorney General Pruitt, this team has held bad actors accountable and protected stewardship of Oklahoma's natural resources."

Residents who live in eastern Oklahoma, where local ponds and streams are still often clogged with algae, said they, too, were frustrated.

Phosphorus levels have declined considerably — a total of about 70 percent between 1998 and 2015 — but the largest reductions took place before Pruitt became attorney general, as wastewater treatment plants have been upgraded and more poultry farmers have shipped chicken waste for proper disposal. Still, the levels remain far above the state standard, and the decline in pollution has been slower than some hoped.

"I want an attorney general — and a head of our EPA — who is not averse to protecting Oklahoma's most outstanding waterways," said Ed Brocksmith, who is a co-founder of a group called Save the Illinois River.

At the same time that he was retreating from his predecessor's more aggressive approach, Pruitt sent a series of letters to federal regulators that in some cases were drafted by industry lobbyists and then put on his state government stationary, open records obtained by The New York Times in 2014 showed. The letters pressed the federal government to back down on proposals to tighten controls over energy production, such as oil and gas wells that can release planet-warming methane.

Pruitt separately filed a series of lawsuits against the federal government, challenging regulations intended to reduce the discharge of poisonous mercury from coal-burning power plants, carbon dioxide blamed for climate change and other emissions that federal authorities argued were causing unsightly haze in Oklahoma's air.

In total, Pruitt filed 14 lawsuits challenging federal environmental regulations. In 13 of those cases, the co-parties included companies that had contributed money to Pruitt or to Pruitt-affiliated political campaign committees.

Pruitt separately has served as a leader of the Republican Attorneys General Association, which since 2013 has collected $4.2 million from fossil-fuel related companies, including Exxon Mobil, Koch Industries, Murray Energy and Southern Co., which in many cases have also supported the lawsuits he has filed.

Given the scale of his regulatory challenges, Pruitt turned to major corporate law firms, which typically defend energy companies fighting these laws, for help. In some cases, that assistance was offered free.

David B. Rivkin Jr., the lead attorney from BakerHostetler who handled the matter, said that the work was considered charitable, similar to when major law firms give free legal advice to inmates at the Guantánamo Bay military prison.

"The industries and companies, through their corporate lawyers, are renting the state's seal in order to make it look like their self-interested arguments are being made by Scott Pruitt on behalf of a state," said David Doniger, director of the Climate and Clean Air Program at the Natural Resources Defense Counsel. "It is a disgrace."

Even federal judges are skeptical.

Pruitt joined with Missouri and several other mostly rural states in one federal suit to beat back California's regulations requiring egg farms, including those in Oklahoma, that wanted to sell in the state to seek more humane treatment of hens. In rejecting the suit, the federal judge admonished the plaintiffs.

"The court concludes plaintiffs have not brought this action on behalf of their interest in the physical or economic well-being of their residents in general," Judge Kimberly J. Mueller of the U.S. District Court wrote in her 2014 opinion, "but rather on behalf of a discrete group of egg farmers whose businesses will allegedly be impacted."