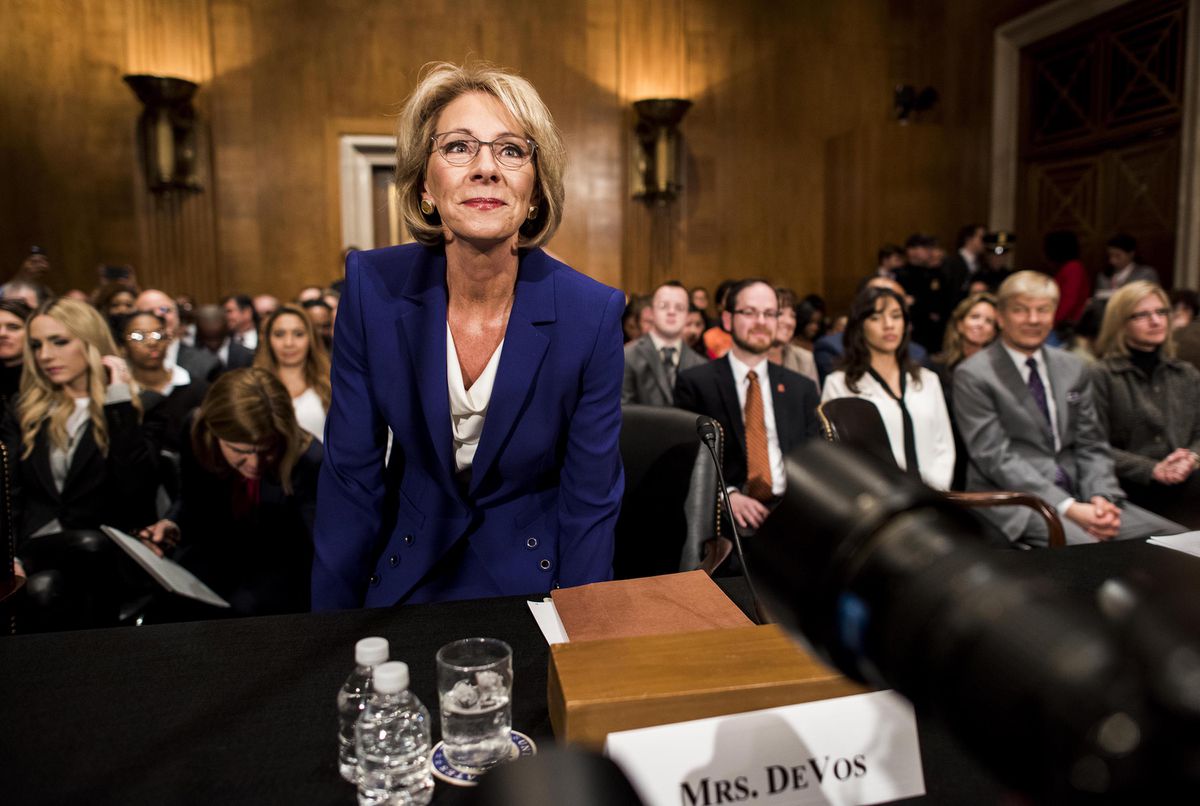 WASHINGTON – The Senate education committee was deeply divided over President-elect Donald Trump's pick for education secretary at her confirmation hearing Tuesday evening, with Democrats attacking Betsy DeVos as unfit for the job and Republicans defending her as a bold reformer.

DeVos, a Michigan billionaire, repeatedly told skeptical senators that she looked forward to working with them to improve the nation's schools. But she sidestepped several issues important to Democrats and their allies: She declined to commit that she would not work to privatize the nation's public schools, called Sen. Bernie Sanders' ideas about free college tuition "interesting," and said she could not promise to uphold the Obama administration's guidance to K-12 schools and colleges on handling allegations of campus sexual violence.

"It would be premature" to make such a commitment, DeVos said in response to a question from Sen. Robert Casey Jr., D-Pa.

The Obama administration's guidance on sexual assault, issued in 2011, was a turning point in the national conversation about such violence and pushed campus officials to more aggressively investigate incidents and protect survivors' rights.

But the guidance, which directed schools to use a "preponderance of the evidence" standard in sexual assault investigations, has drawn backlash from some colleges and politicians who argue that it violates the rights of those accused of assault.

"Assault in any form is never okay. I just want to be very clear on that," DeVos said Tuesday. "If confirmed, I look forward to understanding the past actions and current situation better, and to ensuring that the intent of the law is actually carried out in a way that recognizes both the victim . . . as well as those who are accused."

DeVos is an unusually polarizing nominee to helm the Education Department. She has lobbied for decades to expand charter schools and taxpayer-funded vouchers for private and religious schools, but she has no professional experience in public schools and has not held public office.

In his introduction of DeVos at Tuesday's hearing, Joe Lieberman, the Democratic nominee for vice president in 2000, argued that her status as an outsider is an asset.

"She doesn't come from within the education establishment. But honestly, I believe that today that's one of the most important qualifications you could have for this job," the former senator from Connecticut said. "We need a change agent."

GOP senators cheered DeVos' nomination, saying they hoped that she would champion alternatives to the nation's public schools and scale back the federal footprint in K-12 education.

"Betsy DeVos, in my opinion, is on our children's side," Sen. Lamar Alexander, R-Tenn., chairman of the Health, Education, Labor and Pensions (HELP) Committee, said in his opening remarks Tuesday. "She's devoted her life to helping mainly low-income children have access to better schools."

Alexander dismissed DeVos' critics as out of step with public opinion, arguing that charter schools have been embraced by Democrats, including President Barack Obama, and that vouchers are patterned on "the most successful social policy this Congress has ever enacted – the GI Bill," which provides tuition assistance for veterans to attend the college of their choice.

"Why is such a great idea for colleges deemed to be such a dangerous idea for K-12 schools?" Alexander said.

He said he would restrict senators to one five-minute round of questions for DeVos, which dismayed Democrats, who said they needed more time to examine DeVos' record. "I think we're selling our kids short by not being able to ask follow up questions," said Sen. Al Franken, D-Minn.

The hearing went forward Tuesday evening over the objections of Democrats, who are concerned that the Office of Government Ethics – which is responsible for vetting presidential nominees for potential conflicts of interest – has not finished its review of DeVos' vast wealth and financial investments.

Sen. Patty Murray, Wash., the ranking Democrat on the HELP committee, said she is "extremely disappointed" that Republicans insisted on having the hearing before the ethics review was done. Murray said she wants DeVos to explain how she would handle potential conflicts of interest, given her "extensive financial entanglements."

Murray told DeVos that she has "major concerns about how you spent your career and your fortune fighting to privatize public education," and is concerned about DeVos' contributions to groups that "want to impose anti-LGBT or anti-women's health beliefs on public schools and the students in them."

DeVos promised to resolve any conflicts of interest identified by the ethics office. "I will not be conflicted, period," she said. "I commit that to you all."

She said that if confirmed, she will be a "strong advocate for great public schools." But when public schools are "troubled, or unsafe, or not a good fit for a child," she said, parents should have a "right to enroll their child in a high-quality alternative."

"I share President-elect Trump's view that it's time to shift the debate from what the system thinks is best for kids to what moms and dads want, expect and deserve," she said.

[Russia says it's ready to talk to Trump about nuclear arms and Syria, calls dossier a hoax]

The strong feelings about DeVos' nomination were evident in the line of more than 100 people waiting to enter the Capitol Hill hearing room Tuesday evening. There were supporters, including students in plaid uniforms and bright yellow scarves embroidered with "National School Choice Week," and critics, including a large contingent of parents and teens from Detroit, who came by bus to oppose Devos' nomination.

But many Democrats and their allies, including teachers unions and civil rights groups, argue that her support for a free-market approach to education has undermined public schools, which they see as a critical civic institution. They also point to the fact that she has no record on higher education or protecting children's civil rights, two areas critical to the work of the department she aims to lead.

"Betsy DeVos is wholly unqualified to do this work," said Wade Henderson, president of the Leadership Conference on Civil and Human Rights. He urged senators to reject DeVos, the first time the group has opposed an education secretary nominee.

Asked about her relatives' contributions to anti-LGBT groups, DeVos said she believes in equality: "I believe in the innate value of every single human being and that all students, no matter their age, should be able to attend a school and feel safe and be free of discrimination," she said.

The strong opposition is unusual for nominees to lead the Education Department: Obama's first nominee to the education job, Arne Duncan, was warmly welcomed by senators from both parties and was confirmed via voice vote. Nominees under presidents George H.W. Bush, Bill Clinton and George W. Bush also sailed through.

DeVos' confirmation hearing came on the same day as a hearing for Rep. Ryan Zinke, R-Mont., Trump's choice for interior secretary, who is expected to sail to an easy confirmation.

On the campaign trail, Trump proposed a new $20 billion grant program to encourage states to expand such efforts, but he offered few details about how that might work, and there is a tension between the incoming administration's interest in expanding vouchers and charter schools and conservatives' interest in leaving decisions about education to states and school districts.

DeVos said repeatedly Tuesday that she would not coerce states to expand vouchers or charters.

The HELP Committee is scheduled to vote on DeVos' confirmation on Jan. 24.

The Washington Post's Danielle Douglas-Gabriel contributed to this report.