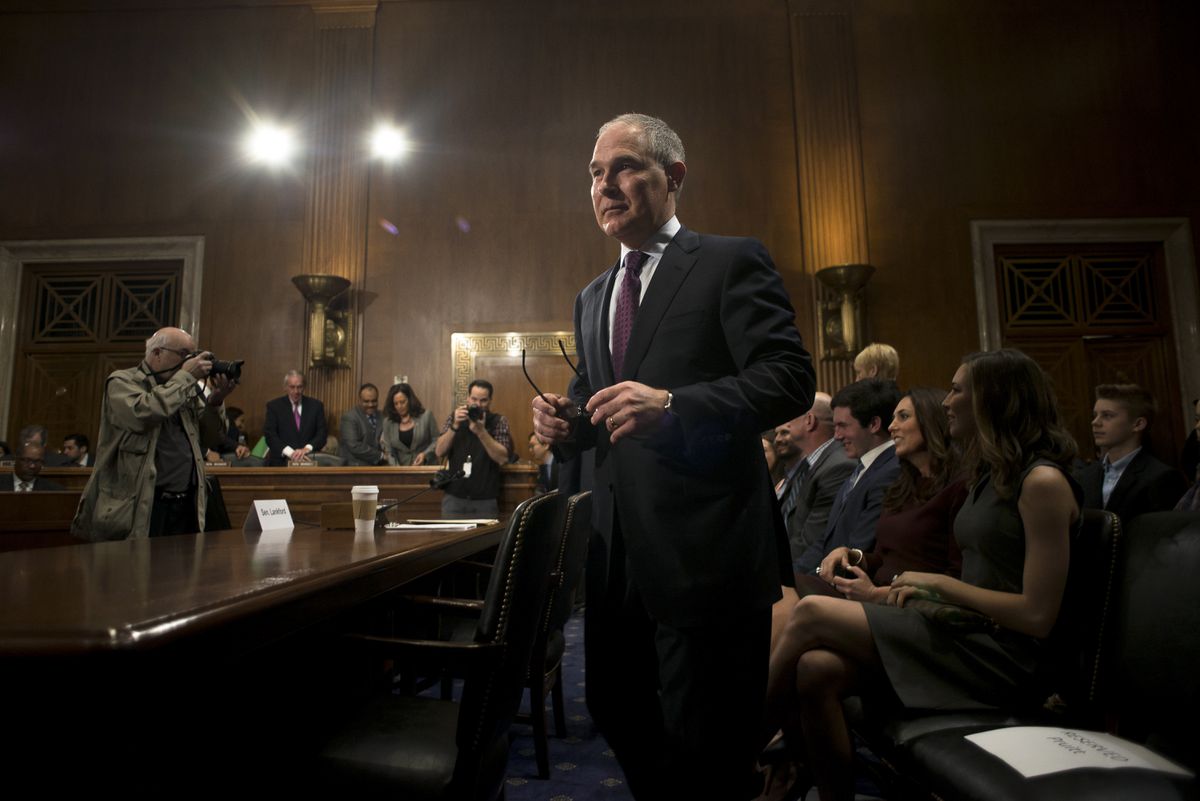 In his opening statement, Pruitt, Oklahoma's attorney general, offered his vision of a more restrained EPA.

"As attorney general of Oklahoma, I saw examples where the agency became dissatisfied with the tools Congress had given it to address certain issues, and bootstrapped its own powers and tools through rule-making," he said. "This, unfortunately, has resulted in protracted litigation. The agency must be committed to using its expertise in environmental issues, not to end-run around Congress."

Democrats on the Senate Environment and Public Works Committee aggressively pressed Pruitt on his record, noting that he has sued the EPA 14 times in an effort to block federal air and water pollution regulations. In particular, they questioned Pruitt repeatedly about letters drafted by energy lobbyists that were sent on state stationery to federal agencies and even to President Barack Obama, outlining the economic hardship threatened by the environmental rules.

Pruitt was introduced by Sen. James Inhofe, the Oklahoma Republican who is Congress' most prominent denialist of the established science of human-caused climate change.

Inhofe praised Pruitt as a "champion of state and individual rights" who has "fought against federal overreach."

"Yes, as attorney general, Scott fought the EPA, the Fish and Wildlife Service and the outgoing administration on many fronts, but all of these suits were brought to protect state and local interests from overzealous and activist agencies," Inhofe said.

Environmental activists crammed into the hallway outside the Senate hearing room where Pruitt was testifying, a show of opposition to a nominee for an agency that Trump has said he wants to essentially dismantle. Protesters, some dressed in oil rig gear and pink knitted hats associated with the women's march against Trump planned for Saturday, occasionally broke into the room, shouting "Pruitt takes money from the oil industry!" and "We don't want the EPA gutted!"

Still, it is highly likely that Pruitt will be confirmed by the full Senate. He is expected to receive support from all 51 Senate Republicans and from Sen. Joe Manchin III, D-W.Va.

Pruitt directly addressed climate change in his opening remarks, saying: "Science tells us that the climate is changing and human activity in some manner impacts that change. The human ability to measure with precision the extent of that impact is subject to continuing debate and dialogue, as well they should be."

While Pruitt's statement appeared intended to appease critics, it is not consistent with the scientific consensus on climate change. A report in 2013 by the Intergovernmental Panel on Climate Change, a U.N. group that reviews and summarizes climate science, found it to be "extremely likely" that more than half of the global warming that occurred from 1951 to 2010 was a consequence of human emissions of carbon dioxide and other greenhouse gases.

Among the largest and most contentious regulatory obligations now facing the EPA will be enactment of Obama's signature climate change policy, the Clean Power Plan, which would require states to curb their planet-warming pollution from coal-fired power plants. Pruitt has played a lead role in a 27-state lawsuit against the plan, which charges that the agency has vastly overstepped its authority.

Pruitt's hearing took place on the same day that the National Oceanic and Atmospheric Administration reported that 2016 was the hottest year on record, surpassing marks set in 2015 and 2014.

Pruitt did not offer a road map for how he might legally unwind the Clean Power Plan, or specifics of how he might return authority for its implementation to the states.

But Senate Democrats pressed Pruitt to recuse himself from regulatory decisions involving cases he has filed against the agency, including the Clean Power Plan.

"As administrator, in these cases you would be plaintiff, defendant, judge and jury. That would be wrong," said Sen. Edward J. Markey, D-Mass.

Pruitt responded that the EPA's ethics counsel had advised him that he must recuse himself from cases in which he had a role as plaintiff, if they were filed within a year of the time he would review them as EPA administrator.

"I have every willingness to recuse as directed by EPA counsel, and if directed to do so I will recuse," he said.

Markey shot back: "What the American people are expecting here is that the EPA doesn't turn into every polluters' ally. The only way to do that is for you to recuse yourself from every case you brought. Otherwise, people will think it's not just the fox guarding the henhouse, it's the fox destroying the henhouse."