US scientists declare 2016 the hottest year on record. That makes 3 in a row.

In a powerful testament to the warming of the planet, two leading U.S. science agencies Wednesday jointly declared 2016 the hottest year on record, surpassing the previous record set last year – which itself had topped a mark set in 2014.

The pronouncement comes two days before President-elect Donald Trump, who has tweeted that global warming is a hoax, takes office after a campaign in which he threatened to pull the nation out of an international agreement to fight climate change.

Trump has since said he has an open mind about the Paris climate accord, even as he has nominated to various Cabinet posts a slate of men who have raised questions about the extent to which human activity is responsible for rising temperatures around the world.

Scientists have been far less guarded, noting the striking reality that global temperatures have set a record three years in a row.

[Polar bears' path to decline runs through an Alaska village]

NASA announced the record jointly with the National Oceanic and Atmospheric Administration.

Last year's warmth was manifested across the planet, from the warm tropical ocean waters off the coast of northeastern Australia that contribute to the widespread death of coral in the Great Barrier Reef, to the Arctic, where melting sea ice hit regular monthly record lows and overall temperatures were the highest on record, at least from January through September of 2016.

In a catalogue of some of the extremes the planet witnessed during the year, the NOAA noted the megafire that engulfed Fort McMurray, in Alberta, Canada, at the beginning of May, a conflagration that came relatively early in the year for wildfires. That event was certainly consistent with a warming climate, as well as with the role of El Niño, although scientists are reluctant to formally say that climate change has played a role in an individual event without conducting extensive analysis. 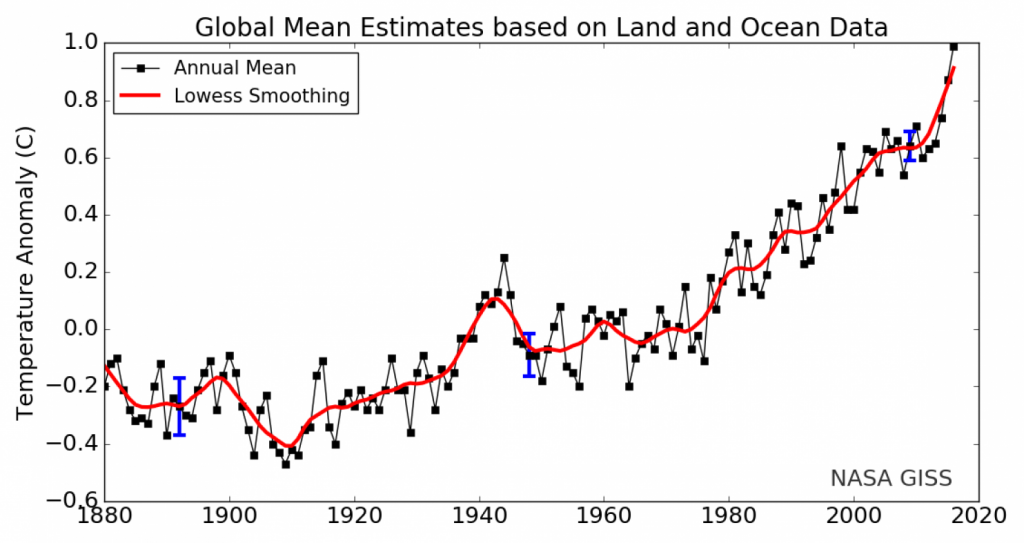 For the contiguous United States, 2016 was merely the second warmest year on record, but for Alaska, it was the warmest yet recorded, underscoring once again the sharpness of Arctic warmth, in particular.

Last year's warmth was partly enhanced by a strong weather pattern known as El Niño, triggered by unusually warm waters in the Pacific. But the scientists underscore that the event is hardly the only cause. For example, 1998 was also, at the time, the warmest year on record, thanks in part to a strong El Niño – but the 2016 planetary temperature now far surpasses that year, meaning other factors probably contributed to the temperature's rise.

"This El Niño might have contributed about a quarter or a third" of the record in 2016, said Deke Arndt, chief of the global monitoring branch at NOAA's National Centers for Environmental Information, on a press call Wednesday.

Scientists said the three-year rise in temperatures only increases the urgency to battle climate change.

"2016 is a wake-up call in many ways," said Jonathan Overpeck, a climate scientist at the University of Arizona. "Climate change is real, it is caused by humans and it is serious."

Officially, average surface temperatures in 2016 were 0.07 degrees Fahrenheit warmer than 2015, and featured eight successive months (January through August) that were individually the warmest since the agency's record began in 1880, according to NOAA.

The average temperature across the world's land and ocean surfaces was 58.69 Fahrenheit, or 1.69 degrees above the 20th century average of 57 degrees, NOAA declared. The agency also noted that the record for the global temperature has now successively been broken five times since the year 2000. The years 2005 and 2010 were also record warm years, according to the agency's data.

NASA concurred with NOAA, also declaring 2016 the warmest year on record based on its own data tracking temperatures at the surface of the planet's land and oceans, and expressing "greater than 95 percent certainty" in that conclusion. (In contrast, NOAA gave a 62 percent confidence in the broken record.)

NASA found a bigger leap upward of temperatures in 2016, measuring the year as 0.22 degrees Fahrenheit higher than the prior record year of 2015. The agency also noted that since the year 2001 the planet has seen "16 of the 17 warmest years on record."

NASA noted in its analysis that, compared with the late 19th century, the planet has now warmed about 1.1 degrees Celsius, or 2 degrees Fahrenheit. That's significant because the global community has been striving to limit overall warming to considerably below a 2 degree Celsius rise, and even, if possible, to hold it to a 1.5 degree Celsius increase. That is now only about 0.4 degrees away, based on these figures.

The Paris climate agreement is supposed to be a major step toward arresting the rise in temperatures. But its prospects face new uncertainties with the election of Trump. On Wednesday, as the latest climate news went public, Trump's nominee to head the Environmental Protection Agency, Scott Pruitt, endured a series of questions about the warming of Earth.

Pruitt, who has battled with the agency as Oklahoma attorney general, used his opening statement to acknowledge that "science tells us that the climate is changing." But he added that precisely how much humans are contributing to the problem and what policy actions to take remain open "to debate and dialogue."

And while the talk continues, temperatures are rising.

"The main take-home response . . . is that the trends we've been seeing since the 1970s are continuing and have not paused in any way," NASA's Schmidt told reporters in summarizing the latest climate report.