Trump, in CIA visit, attacks media for coverage of his inaugural crowds 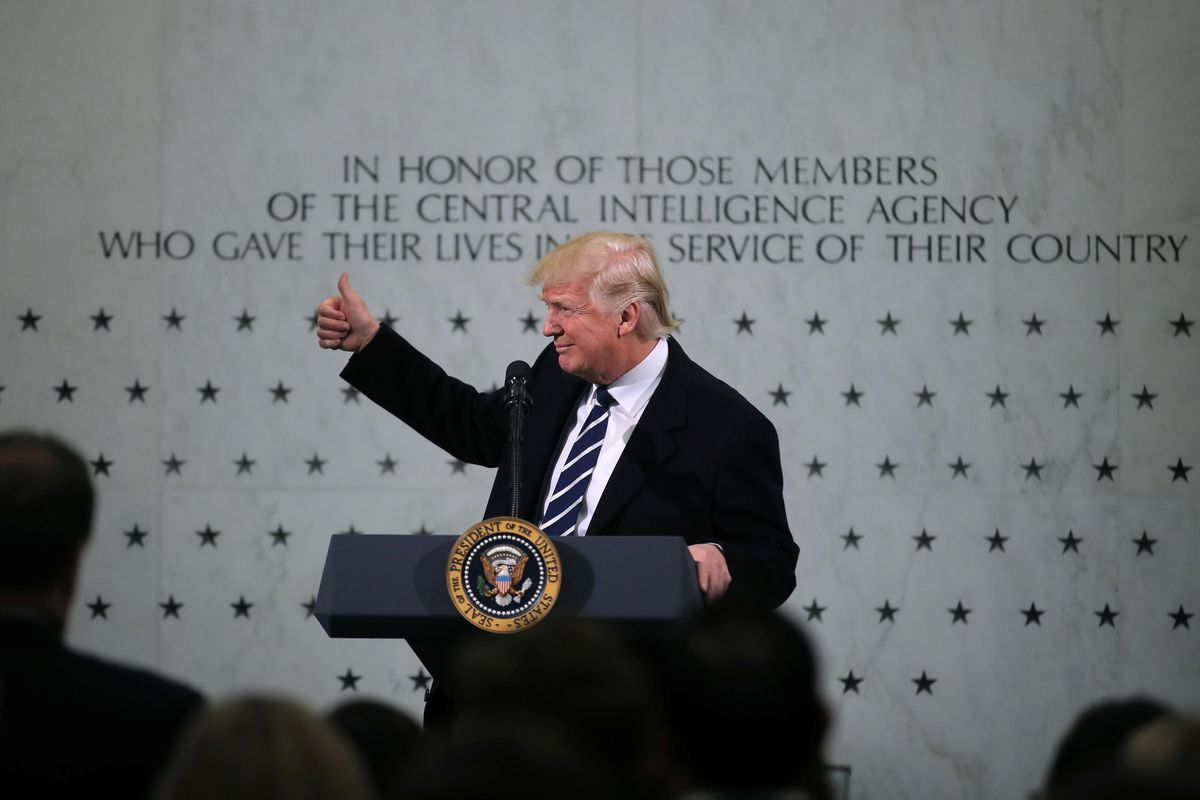 President Donald Trump delivers remarks during a visit to the Central Intelligence Agency in Langley, Va., on Saturday. REUTERS/Carlos Barria

President Donald Trump delivers remarks during a visit to the Central Intelligence Agency in Langley, Va., on Saturday. REUTERS/Carlos Barria

WASHINGTON – President Donald Trump used his first full day in office to wage war on the media, accusing news organizations of lying about the size of his inauguration crowd as Saturday's huge protests served notice that a vocal and resolute opposition would be a hallmark of his presidency.

With Americans taking to the streets in red and blue states alike to emphatically decry a president they consider reprehensible and, even, illegitimate, Trump visited the Central Intelligence Agency for a stream-of-consciousness airing of grievances – including against journalists, whom he called "the most dishonest human beings on Earth."

Shortly thereafter, press secretary Sean Spicer addressed the media for the first time from the White House, where he yelled at the assembled press corps and charged it with "sowing division" with "deliberately false reporting" of Trump's inauguration crowd.

Trump claimed that the crowd for his swearing-in stretched down the Mall to the Washington Monument. It did not. Trump accused television networks of showing "an empty field" and reporting that he drew just 250,000 people to witness Friday's ceremony.

"It looked like a million, a million and a half people," Trump said. "It's a lie. We caught (the media). We caught them in a beauty."

During his 2009 inaugural address, President Barack Obama's crowd extended that far, and a side-by-side comparison of aerial photos from both inaugurations clearly shows that Obama's crowd was much larger than Trump's.

Spicer echoed his boss's assertion about the inauguration, insisting from behind the podium at the White House press briefing room that more than 700,000 people stretched down the Mall to the Washington Monument.

"This was the largest audience to ever witness an inauguration, period – both in person and around the globe," Spicer said, less than a minute after declaring that "no one had numbers" because the National Park Service, which controls the Mall, does not release crowd estimates.

One verifiable number that Spicer offered was that ridership on Washington's subway system on Friday was higher than for Obama's inauguration four years ago. Spicer said that 420,000 people rode Metro on Friday, while only 317,000 did so for Obama in 2013. Both of these numbers are inaccurate. Nearly 571,000 people rode on Friday, and 782,000 rode on Inauguration Day four years ago, according to the Washington Metropolitan Area Transit Authority.

Spicer warned journalists that they are in for more sparring with the new administration. "There's been a lot of talk in the media about the responsibility to hold Donald Trump accountable, and I'm here to tell you that it goes two ways," he said. "We're going to hold the press accountable as well."

In a highly unusual move, Spicer left the briefing room without answering questions from reporters, including one shouted at him about Saturday's Women's March on Washington.

Trump and Spicer also lambasted a member of the White House press pool who reported Friday that Trump had removed a bust of civil rights icon the Rev. Martin Luther King Jr. from the Oval Office.

The bust remains in the Oval Office, but pool reporter Zeke Miller of Time magazine did not see it during a brief visit to witness Trump signing an executive order on health care. Miller corrected his pool report and tweet Friday evening and publicly apologized for the mistake. In response, Spicer tweeted, "Apology accepted."

Nonetheless, Trump called the episode an example of "how dishonest the media is."

[Trump's improvised path to a month of executive action]

Trump visited the CIA's headquarters in Langley, Virginia, to express his gratitude for the intelligence community, which he had repeatedly railed against during the transition period and recently likened to Nazis.

What the newly inaugurated president delivered before some 400 career intelligence officers in one of the government's most hallowed settings – the wall of carved stars memorializing officers who died in the line of duty – was a disjointed, campaign-style monologue. He complained about the Senate delaying confirmation of his nominees; critics questioning whether he is smart and vigorous; and journalists reporting on the size of his inauguration crowd.

"I have a running war with the media," Trump declared. "They are among the most dishonest human beings on Earth, right?"

Many in the crowd – which was composed of agency employees who had signed up to see him speak as well as some of Trump's White House aides – applauded. At one point, Trump claimed that most of the people in the room had voted for him.

John Brennan, who resigned Friday as CIA director at the conclusion of Obama's presidency, said through a spokesman that he was angry about Trump's speech.

"Former CIA Director Brennan is deeply saddened and angered at Donald Trump's despicable display of self-aggrandizement in front of CIA's Memorial Wall of Agency heroes," Nick Shapiro, a former deputy chief of staff to Brennan, said in a statement. "Brennan says that Trump should be ashamed of himself."

The president's performance was jarring to some current intelligence officials as well.

"That was one of the more disconcerting speeches I've seen," said one senior U.S. intelligence official who was not present for the speech but watched it on video. "He could have kept it very simple and said, 'I'm here to build some bridges.' But he spent 10 seconds on that, and the rest was on the crowd size."

The official, who spoke on the condition of anonymity and was not authorized to speak publicly, said Trump's use of the CIA memorial wall as a backdrop was "offensive."

In his visit – the first of what aides said would be many to federal departments and agencies – Trump tried to express solidarity with the CIA and blamed the media for creating distrust.

"They sort of made it sound like I had a feud with the intelligence community," he said. "I just want to let you know, the reason you're the number one stop is it is exactly the opposite."

In fact, Trump repeatedly vilified the intelligence community throughout much of his transition in an attempt to push back against what he saw as politically charged conclusions by the CIA and other agencies about Russia's hacking of Democratic Party emails to interfere with the 2016 election.

At a Jan. 11 news conference, Trump accused U.S. intelligence officials of being behind a Nazi-like smear campaign against him. He has put quotation marks around the word "intelligence" in referring to such officials. And last weekend, for instance, Trump attacked CIA Director John Brennan – who resigned Friday at the conclusion of President Obama's term – in a pair of tweets, suggesting he was "the leaker of Fake News."

In his remarks at Langley, Trump vowed to lead the fight against the Islamic State: "We have not used the real abilities that we have." He added, "Radical Islamic terrorism – and I said it yesterday – has to be eradicated, just off the face of the Earth. This is evil."

Trump also delved into the Iraq War, repeating his oft-stated belief that the United States bungled its exit from the country by not taking Iraq's oil, which he said was how the Islamic State made its money.

"The old expression, to the victor belong the spoils," he said, adding: "We should've kept the oil. But, OK, maybe we'll have another chance."

At the White House, where the chants of a huge crowd on the Mall for the Women's March on Washington could be heard for much of the day, Trump's advisers grappled with this difficult reality: There will be no honeymoon for the 45th president.

The 44th president, Barack Obama, had urged Americans to give his successor a chance. But the activists who stirred the masses on Saturday vowed to obstruct Trump's agenda on such issues as health care, climate change, criminal justice, gay rights and access to abortion and birth control.

As the images from coast to coast were being broadcast on cable news, Trump spent the morning at an interfaith prayer service choreographed to promote national unity. The service at Washington National Cathedral featured a diverse array of religious readings and patriotic hymns, including a Muslim call to prayer from Imam Mohamed Magid of the All Dulles Area Muslim Society Center in Sterling, Virginia.

But the prayer service appeared to do little to quiet the resistance.

"This is likely to be a feature of the entire presidency," said Steve Schmidt, a veteran Republican strategist who criticized Trump's candidacy. "If you look back to the rise of the tea party over 2009 and 2010 – the revolt that took place at the town hall meetings, the protests – that's starting with this president at an earlier hour and in numbers that are by orders of magnitude greater."

David Axelrod, one of Obama's closest advisers and an architect of his campaign strategies, said it is incumbent upon Trump's opponents to do more than march.

"This is an impressive display today. But if it isn't channeled into organizing in a focused way, then it is cathartic but not in the long run meaningful," he said. "That's the challenge for the progressive community."