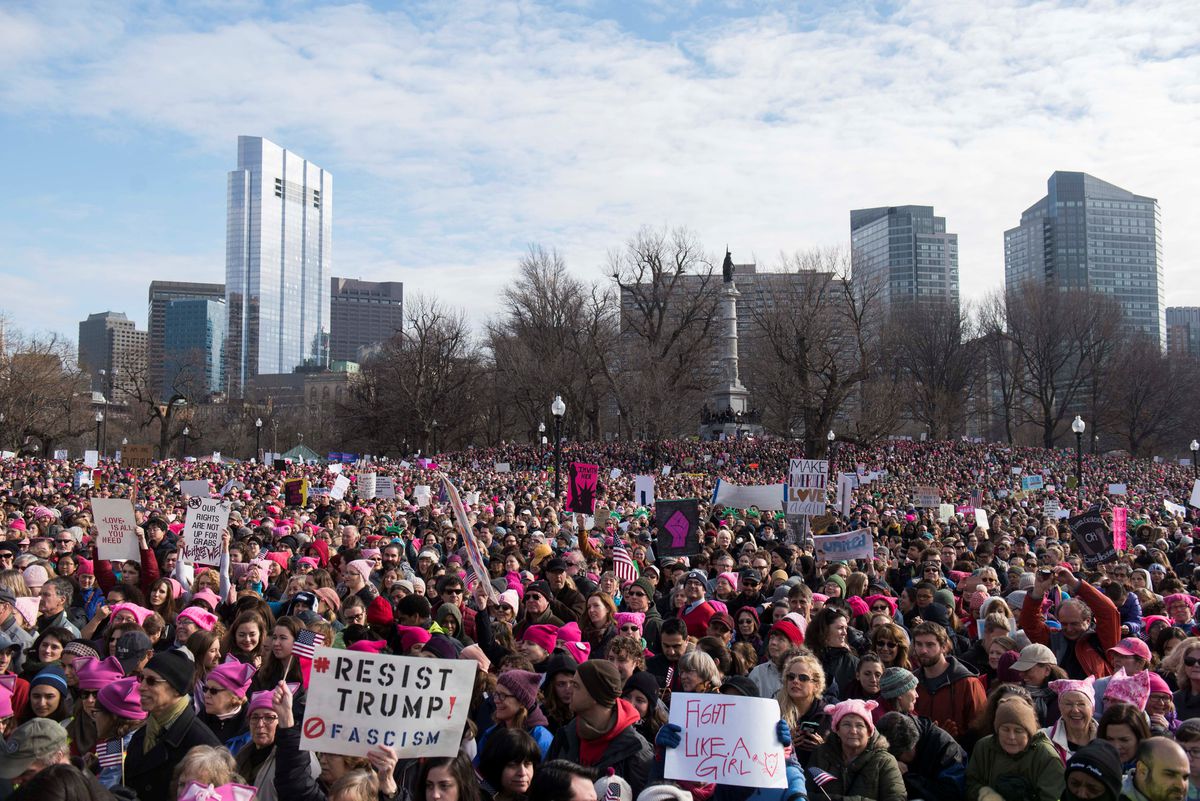 Thousands gather on Boston Common to hear speakers at the Boston Women’s March for America on Saturday. REUTERS/Sam Goresh

Thousands gather on Boston Common to hear speakers at the Boston Women’s March for America on Saturday. REUTERS/Sam Goresh

Hundreds of thousands of women, men and children sported knitted pink hats and hoisted signs – many in direct challenge to President Donald Trump – as simultaneous Women's March events filled the streets of cities and towns across the country Saturday.

The Women's March on Washington website listed 673 planned marches around the world, including hundreds in cities and towns across the United States that ranged from major metropolises like Los Angeles and Chicago to tiny towns like Lander, Wyoming, and Stanley, Idaho.

By midday, hundreds of thousands of people had filled the downtown streets of St. Louis, New York City, Chicago and other major cities. In Chicago, a planned march transformed into a standing rally after crowds swelled to an estimated 150,000, according to the Chicago Tribune.

"We transitioned to a support rally at Grant Park," said Officer Jose Estrada, a spokesman for the Chicago Police Department. "The park was at capacity earlier."

[Thousands expected to participate in Women's March events in Alaska]

In Los Angeles, a police spokesman said authorities had begun to temporarily close some of the side streets beyond the scheduled perimeter of the march to accommodate the size of "the crowds spilling over into adjacent streets."

"We are doing our best to facilitate because they are squeezing into every street right now," said Capt. Andrew Nieman of the Los Angeles Police Department.

In Denver, the crowds numbered in the tens of thousands.

Organizers expect to see nearly 50 marches in California alone. There are 18 planned in Alaska, where temperatures in some places are hovering at 15 degrees below zero today. Four marches are planned in the U.S. territory of Puerto Rico.

March organizers have ranged from a writer and photographer in Portland, Oregon, to a pair of teenagers in Boise, Idaho, according to local news reports. Messages, too, have run the liberal gamut from specific appeals for women's and minority rights to broad denunciations of Trump's policies and rhetoric.

A sign in Chicago: "Hate never made anything great"; in Nashville: "Girls just want to have fundamental human rights"; in Philadelphia: "Stand with Planned Parenthood"; in Raleigh, "Pro Woman Pro Gun Safety." There was support for Black Lives Matter, wage equality, gun control and LGBTQ rights. Self-identification as a "nasty woman" – words Trump used to describe Hillary Clinton – was everywhere.

A group of women in St. Louis marched through 60 degree weather with their protest slogans scrawled across their shirtless torsos.

Other demonstrators mocked Trump's favorite – or most notorious – phrases, or put them to use in the form of a challenge: ("Sad!" "This Mexican pussy grabs back!")

The rally and march in downtown Chicago featured music and speakers and was expected draw up to 50,000 people, organizers said. In Birmingham, Ala., the speakers will include immigrant rights groups and leaders from the NAACP.

The Women's March on Washington website estimated that attendance of marches outside Washington would top 2.5 million.

For those who couldn't make it out into the streets, march organizers promoted the online Disability March.