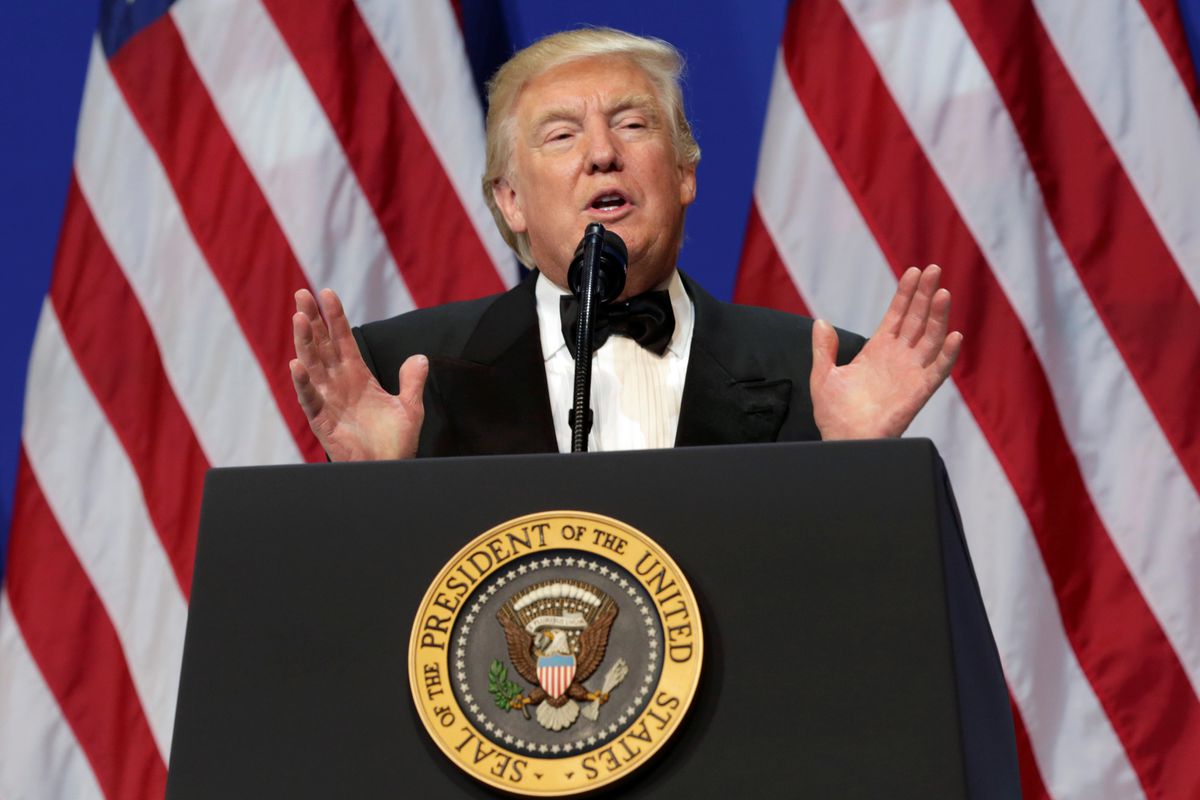 WASHINGTON — President Donald Trump on Wednesday will order the construction of a Mexican border wall — the first in a series of actions this week to crack down on immigrants and bolster national security, including slashing the number of refugees who can resettle in the United States and blocking Syrians and others from "terror-prone" nations from entering, at least temporarily.

The orders are among an array of national security directives Trump is considering issuing in the coming days, according to people who have seen the orders. They include reviewing whether to resume the once-secret "black site" detention program; keep open the prison at Guantánamo Bay; and designate the Muslim Brotherhood a terrorist organization.

According to a draft, the order on detention policies would start a review of "whether to reinstate the program of interrogation of high-value alien terrorists to be operated outside the United States, and whether such a program should include the use of detention facilities operated by the CIA." But one section of the draft would require that "no person in the custody of the United States shall at any time be subjected to torture, or cruel, inhuman or degrading treatment or punishment, as described by U.S. or international law."

The proposed orders could lead to sweeping and controversial changes in the way the United States conducts itself at home and around the globe in the name of security, potentially leading to the reinstatement of policies that have been repudiated by much of the world.

Big day planned on NATIONAL SECURITY tomorrow. Among many other things, we will build the wall!

Trump will sign the executive order for the wall during an appearance at the Department of Homeland Security on Wednesday, as Mexico's foreign minister, Luis Videgaray, arrives in Washington to prepare for the visit of President Enrique Peña Nieto of Mexico. Peña Nieto will be among the first foreign leaders to meet the new president at the end of the month.

The border wall was a signature promise of Trump's campaign, during which he argued it is vital to gaining control over the illegal flow of immigrants into the United States.

Trump is also expected to target legal immigrants as early as this week, White House officials said, by halting a decades-old program that grants refuge to the world's most vulnerable people as he begins the process of drastically curtailing it and enhancing screening procedures.

In the draft of a separate executive order being circulated inside the administration, Trump would examine the question of whether the CIA should reopen its so-called black sites, secret interrogation and detention centers that it operated overseas. Former President Barack Obama ordered the closings of all in the first week of his presidency in 2009.

The black sites were a highly classified program, so their mention in an executive order would be highly unusual.

The draft of a second executive order would order a review of the Army Field Manual to determine whether to use certain enhanced interrogation techniques.

Another executive order under consideration would direct the secretary of state to determine whether to designate the Muslim Brotherhood a foreign terrorist organization. That designation has been sought by Egypt and the United Arab Emirates.

The refugee policy under consideration would halt admissions from Syria and suspend admissions from other majority-Muslim nations until the administration can study how to properly vet the applicants. This would pave the way for the administration to slash the number of displaced people who can be resettled on U.S. soil and would effectively bar the entry of people from Muslim countries — including Afghanistan, Iraq, Somalia and Syria — at least for some time.

The plan is in line with a ban on Muslim immigrants that Trump proposed during his campaign, arguing that such a step was warranted given concerns about terrorism. He later said he wanted to impose "extreme vetting" of refugees from Syria and other countries where terrorism was rampant, although the Obama administration had already instituted strict screening procedures for Syrian refugees that were designed to weed out anyone who posed a danger.

The expected actions drew strong criticism from immigrant advocates and human rights groups, which called them discriminatory moves that rejected the American tradition of welcoming immigrants of all backgrounds.

"To think that Trump's first 100 days are going to be marked by this very shameful shutting of our doors to everybody who is seeking refuge in this country is very concerning," said Marielena Hincapié, the executive director of the National Immigration Law Center. "Everything points to this being simply a backdoor Muslim ban."

For Trump, whose raucous campaign rallies frequently featured chants of "build the wall," the directive to fortify the border was not unexpected, although it may not be enough by itself to accomplish the task. Congress would need to approve any new funding necessary to build the wall, which Trump has insisted Mexico will finance, despite its leaders' protestations to the contrary. The order would shift already appropriated federal funds to the wall's construction, but it was unclear where the money would come from.

The Government Accountability Office has estimated that it could cost $6.5 million per mile to build a single-layer fence, and an additional $4.2 million per mile for roads and more fencing, according to congressional officials. Those estimates do not include maintenance of the fence along the nearly 2,000-mile border with Mexico. Rep. Nancy Pelosi of California, the Democratic leader, said she thought even Republicans might balk at spending what she said could be $14 billion on a wall.

Trump has said that immigration will be on the agenda when he meets with Peña Nieto.

The order to build the wall is likely to complicate the visit of Videgaray, who has a history with Trump. It was Videgaray, then Mexico's finance minister, who orchestrated Trump's visit to Mexico before the election, a move seen by many Mexicans as tantamount to treason. He was forced to resign because of the fallout, but his reputation was restored after Trump's victory, and he was given the job of foreign minister, in part to capitalize on his relationship with the new American leader.

It is unclear whether Mexican officials were informed of Trump's decision to sign the executive order during Videgaray's visit.

Trump's refugee directive is expected to target a program the Obama administration expanded last year in response to a global refugee crisis, fueled in large part by a large flow of Syrians fleeing their country's civil war. Obama increased the overall number of refugees to be resettled in the United States to 85,000 and ordered that 10,000 of the slots be reserved for Syrians. He set the number of refugees to be resettled this year at 110,000, more than double the 50,000 Trump is now considering.

By the end of last month, more than 25,000 refugees had been resettled, according to State Department figures, meaning the plan Trump is considering would admit only 25,000 more by the end of September.