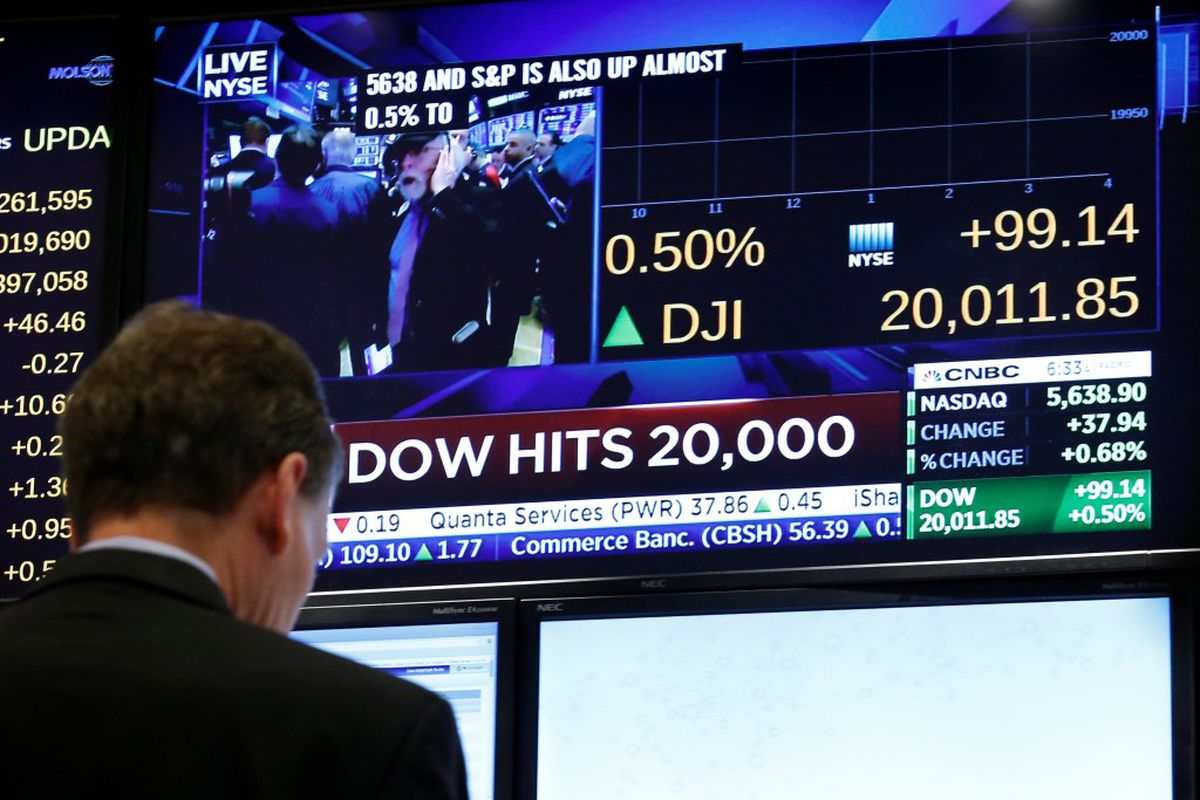 A screen shows the Dow Jones Industrial Average after it passes the 20,000 mark shortly after the opening of the trading on the floor of the New York Stock Exchange January 25, 2017. REUTERS/Brendan McDermid

A screen shows the Dow Jones Industrial Average after it passes the 20,000 mark shortly after the opening of the trading on the floor of the New York Stock Exchange January 25, 2017. REUTERS/Brendan McDermid

The president's signing of numerous executive orders since his inauguration last Friday has reignited a rally that began after his election victory in November. Trump marked the milestone with a tweet: "Great!#Dow20K".

Other U.S. benchmark stock indexes, including the S&P 500 and the Nasdaq Composite, also extended their post-election gains into record-high territory.

Investors said crossing the Dow 20,000 mark was just a number, but still nice to have.

"There are no magic numbers but we like to pretend that there are," said Brian Jacobsen, chief portfolio strategist at Wells Fargo Asset Management in Menomonee Falls, Wisconsin.

The occasion was "like watching your odometer cross over 100,000 or peeking up at the clock and noticing that it's exactly noon," he said.

Thomas Roth, head of U.S. Treasury Trading at MUFG Securities in New York, said the milestone reflects a belief that the pledge to cut taxes and regulation while stimulating the economy will be more business friendly and grow profits.

"While the Dow hitting 20,000 is one of the least meaningful data points on my screen, it does suggest that the equity rally is pretty broad-based," said Michael Purves, chief global strategist at Weeden & Co in New York.

The Dow came within a point of 20,000 on Jan. 6 as investors banked on pro-growth policies and tax cuts from the new Trump administration.

The renewed focus on Trump's policies to reflate the U.S. economy didn't excite the bond and currency markets, however. U.S. yields only inched up and the dollar fell across the board, particularly against a resurgent British pound.

The post-election rally on Wall Street had tempered in recent days as investors fretted about the White House's trade protection pronouncements.

The Dow's move since Nov. 22, when it first closed above 19,000, has been spearheaded by financial stocks, with Goldman Sachs and JPMorgan together accounting for about 20 percent of the gain.

The two banks have benefited as investors bet Trump's expected fiscal stimulus will trigger inflation and stoke a rise in interest rates.

Earlier in Tokyo, the Nikkei advanced 1.4 percent, buoyed by data showing Japanese exports rose for the first time in 15 months in December, a positive sign for the economy even as talk of U.S. protectionism clouds the outlook.

Global bond yields rose as Trump shifted his focus back to growth initiatives including a promise of corporate tax breaks to fuel U.S. investment, after focusing on protectionism in his first few days in office.

In currencies, the dollar failed to carry on its upward momentum from Tuesday.

Lingering concerns about growing protectionism and the potential negative effects on global trade and growth remained close to the surface. In this environment, the outlook for the Federal Reserve is murky.

Brent futures were last little changed at $55.46 per barrel after rising 0.4 percent overnight.