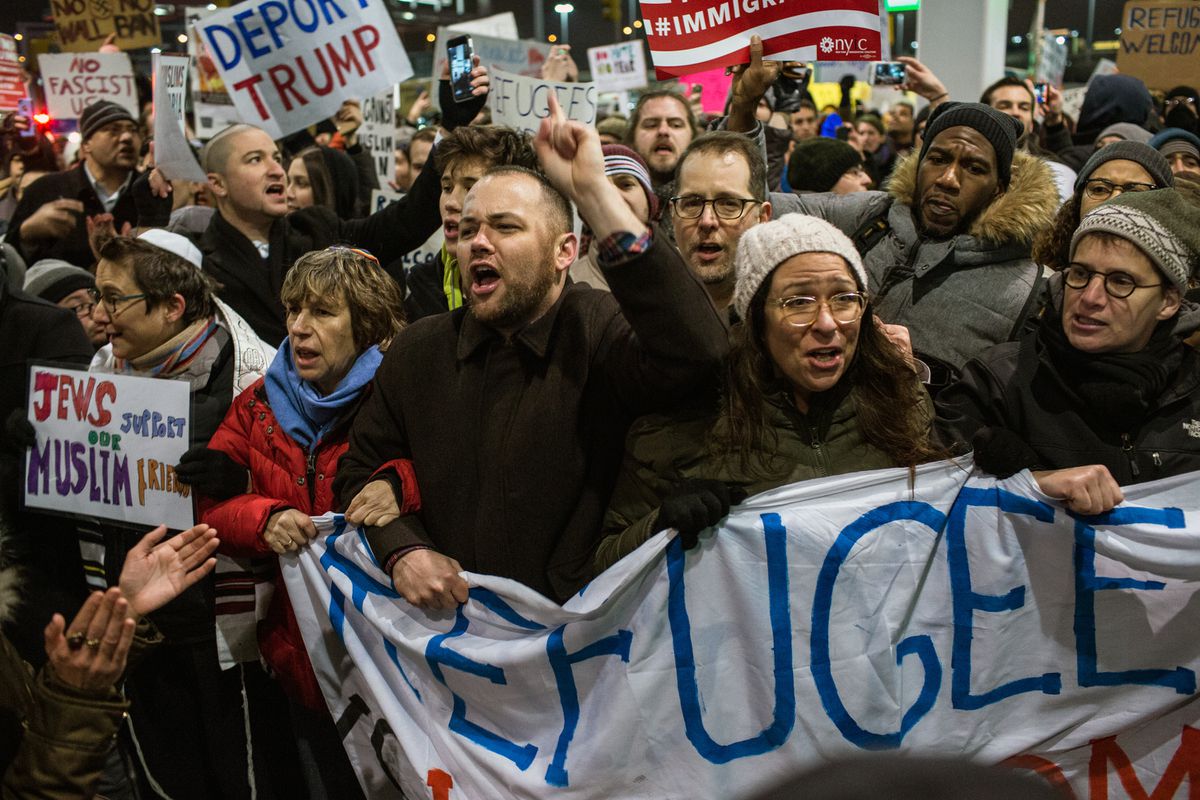 President Trump fired acting attorney general Sally Yates on Monday night after she ordered Justice Department lawyers not to defend his immigration order temporarily banning entry into the United States for citizens of seven Muslim-majority countries and refugees from around the world.

In a news release, the White House said Yates had "betrayed the Department of Justice by refusing to enforce a legal order designed to protect the citizens of the United States." Trump named in her place Dana Boente, the U.S. attorney for the Eastern District of Virginia. Boente said he would enforce the president's directive until he was replaced by Trump's attorney general nominee, Sen. Jeff Sessions, R-Ala.

"Yes, I will," he said in a brief phone interview with The Washington Post. "I was enforcing it this afternoon. Our career department employees were defending the action in court, and I expect that's what they'll do tomorrow, appropriately and properly."

Later Monday, he formally rescinded Yates' order and instructed Justice Department employees "to do our sworn duty and to defend the lawful orders of our President."

The move came just hours after Yates ordered the Justice Department not to defend Trump's immigration order, declaring in a memo that she was not convinced the order is lawful. Yates wrote that, as the leader of the Justice Department, she must ensure that the department's position is "legally defensible" and "consistent with this institution's solemn obligation to always seek justice and stand for what is right."

The stunning events marked the latest sign of turmoil over Trump's announcement Friday that he would shut the U.S. borders to refugees and those entering the country from seven Muslim-majority countries.

More than 100 State Department diplomats have signed a memo objecting to Trump's order, arguing that it will not deter attacks on American soil. The document, which says Trump's ban will generate ill will toward U.S. citizens, is destined for what's known as the department's Dissent Channel, which was set up during the Vietnam War as a way for diplomats to signal to senior leadership their disagreement on foreign policy decisions.

Yates was a holdover from the Obama administration, but her move still represented notable disagreement from someone who would be on the front lines of implementing it.

A Justice Department official said that hours after Yates released her memo refusing to defend the president's executive order, she was delivered a one-line letter from the head of the White House Office of Presidential Personnel saying that she had been removed. The White House then announced her firing with a statement criticizing her as "an Obama Administration appointee who is weak on borders and very weak on illegal immigration."

"It is time to get serious about protecting our country," the statement said. "Calling for tougher vetting for individuals travelling from seven dangerous places is not extreme. It is reasonable and necessary to protect our country."

Sessions, Trump's pick to lead the Justice Department permanently, is awaiting Senate confirmation, although it could come as early as this week. The Senate Judiciary Committee is scheduled to consider his nomination Tuesday, and the entire Senate must wait one day before voting. A spokeswoman for Sessions declined to comment.

Boente (pronounced BEN-tay), who was sworn in at 9 p.m., said he would serve until Sessions is confirmed, which he understood from news reports might happen by week's end. He declined to say when or by whom he was approached to take over as acting attorney general, and he also declined to discuss the specifics of Yates's memo.

Boente is a longtime federal prosecutor who has a remarkably low-key demeanor, although he has supervised high-profile investigations and prosecutions. Assistant U.S. attorneys from his office were involved in the probe of Hillary Clinton's use of a private email server, and they won the criminal convictions – which were later vacated – against former Virginia Republican Gov. Robert McDonnell. Boente also led the prosecutions of former U.S. Rep. William Jefferson, D-La., and former Democratic New Orleans Mayor Ray Nagin. At his swearing-in ceremony as U.S. attorney, then-Attorney General Loretta Lynch called him "that reliable middle child, the one you could always count on to be there for you."

Boente would not have been first in the line of succession ordered by Obama, who had placed U.S. attorneys in the District of Columbia, Chicago and Los Angeles ahead.

Yates's refusal to defend to Trump's immigration order – and her firing over it – capped a day in which resistance to the ban fomented inside the government and across the country.

Civil rights lawyers and others across the country increased the pressure on Trump on Monday to dial back the ban – filing legal challenges to the executive order as they worked to determine whether people were still being improperly denied entry or detained. Lee Gelernt, deputy director of the American Civil Liberties Union's Immigrants' Rights Project, who worked on one of the legal challenges, said of Yates's memo, "It sends a very strong message that there's something very wrong with the Muslim ban."

Earlier in the day, former president Barack Obama also weighed in on the executive action through a spokesman, seeming to back those demonstrating against Trump's decree and declaring his opposition to "discriminating against individuals because of their faith or religion."

Obama said that he was "heartened by the level of engagement taking place in communities around the country" – an apparent reference to protests at airports nationwide. He also disputed Trump's claim that his ban was based on Obama administration decisions.

A Justice Department official familiar with the matter said Yates felt that she was in an "impossible situation" and had been struggling with what to do about a measure she did not consider lawful. A Justice Department official confirmed over the weekend that the department's Office of Legal Counsel had been asked to review the measure to determine whether it was "on its face lawful and properly drafted."

In her memo, though, Yates said her role was broader. She wrote that an Office of Legal Counsel review does "not address whether any policy choice embodied in an Executive Order is wise or just," nor does it "take account of statements made by an administration or its surrogates close in time to the issuance of an Executive Order that may bear on the order's purpose."

That could be a reference to Trump's campaign trail comments about a "Muslim ban" or the recent assertion by Trump surrogate Rudolph W. Giuliani that the president had asked him "the right way to do it legally."

Democrats criticized Yates's firing as an unfair termination of someone who was following the law. House Minority Leader Nancy Pelosi, D-Calif., said, "What the Trump administration calls betrayal is an American with the courage to say that the law and the Constitution come first." Senate Minority Leader Charles E. Schumer, D-N.Y., said the termination "underscores how important it is to have an attorney general who will stand up to the White House when they are violating the law," and said many have doubts about Sessions.

Others, though, turned their ire on Yates.

"It can't be stated strongly enough how reckless, irresponsible and improper the behavior was of the acting attorney general, Sally Yates, in refusing to defend the president's order," senior policy adviser Stephen Miller told Fox News.

Miller accused Yates of "refusing to defend the lawful powers of the president." He also said he had no doubt about the order's legality.

George J. Terwilliger III, a deputy attorney general in the George H.W. Bush administration, said Yates's memo was a "foolish, naked political move by what appears to be an ambitious holdover official" that would only create "unnecessary disorder."

Even with Yates gone, there remain serious questions about the implementation of the order. A lawsuit in Virginia asserted that dozens of people may have been forced to give up their green cards by Customs and Border Protection agents, although that figure could not immediately be substantiated. Lawyers in Los Angeles said they had received similar reports, though they were still exploring them.

The ACLU's Gelernt said that lawyers were "having trouble independently verifying anything because the government will not provide full access to all the detainees." Of particular concern, he said, was that the government had not turned over a list of detainees, as it had been ordered to do by a federal judge in New York. He said that lawyers might be back in federal court in the next day or so to forcibly get access to it.

The ACLU lawsuit in New York is perhaps the most significant of a growing number of legal challenges. The Council on American-Islamic Relations also filed a sweeping challenge Monday, alleging that the order is meant "to initiate the mass expulsion of immigrant and non-immigrant Muslims lawfully residing in the United States." The lawsuit lists 27 plaintiffs, many of them lawful permanent residents and refugees who allege that Trump's order will deny them citizenship or prevent them from traveling abroad and returning home. Lawyers with the Northwest Immigrant Rights Project filed a similar challenge in Washington state.

Bob Ferguson, Washington state's attorney general, also filed a lawsuit on Monday alleging broad, constitutional concerns with the order and its impact on Washington – making him the first state official to do so. That lawsuit has the support of Microsoft and Amazon.com, two companies based in Washington state. (Amazon owner Jeffrey P. Bezos owns The Washington Post and has voiced Amazon's opposition to the order personally.)

White House press secretary Sean Spicer said that one lawsuit "doesn't make any sense" and sought to minimize the action as simply subjecting 109 people to more rigorous screening. According to State Department statistics, about 90,000 people received nonimmigrant or immigrant visas in fiscal year 2015 from the seven countries affected by Trump's executive order.