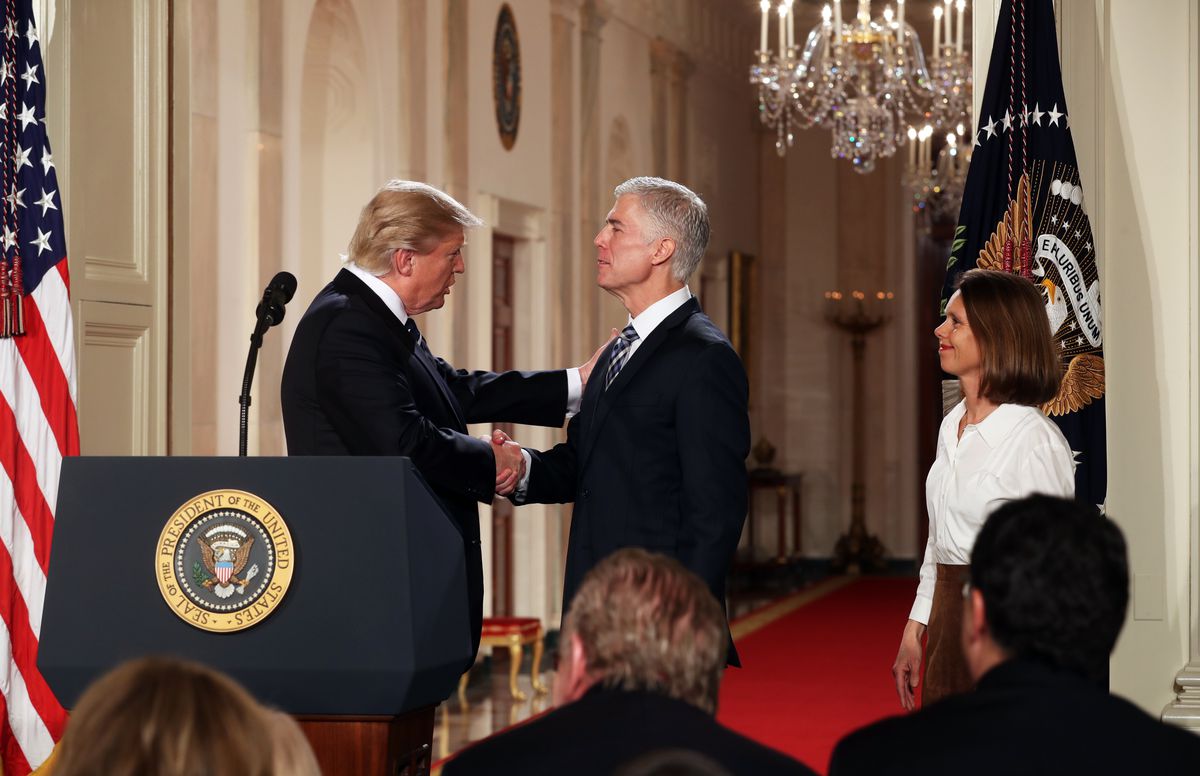 Gorsuch's mother was a high-level official in the Reagan administration. He spent part of his childhood in Washington and practiced law there for a decade, at a prominent law firm and in the Justice Department.

And, like all of the current justices, Gorsuch is a product of the Ivy League, having attended college at Columbia and law school at Harvard.

But there is no doubt about his conservative credentials. And if there is a justice whom he most resembles, it is the one whose seat he has been nominated to fill, Justice Antonin Scalia.

Gorsuch, 49 — who was appointed to the 10th U.S. Circuit Court of Appeals, in Denver, by President George W. Bush — is an originalist, meaning he tries to interpret the Constitution consistently with the understanding of those who drafted and adopted it. This approach leads him to generally but not uniformly conservative results.

"Ours is the job of interpreting the Constitution," he wrote in a concurrence last year. "And that document isn't some inkblot on which litigants may project their hopes and dreams."

Gorsuch has not written extensively on several issues of importance to many conservatives, including gun control and gay rights. But he has taken strong stands in favor of religious freedom, earning him admiration from the right.

In two prominent cases, both of which reached the Supreme Court, he sided with employers who had religious objections to providing some forms of contraception coverage to their female workers.

He voted in favor of Hobby Lobby Stores, a family-owned company that objected to regulations under the Affordable Care Act requiring many employers to provide free contraception coverage. Similarly, he dissented from a decision not to rehear a ruling requiring the Little Sisters of the Poor, an order of nuns, to comply with an aspect of the regulations.

The Supreme Court ruled in favor of Hobby Lobby in 2014 and vacated the decision concerning the Little Sisters of the Poor in 2016.

Like Scalia, Gorsuch takes a broad view of the Fourth Amendment, which bars unreasonable government searches and seizures.

Gorsuch was born and spent his early years in Colorado, and he returned there when he became a judge more than a decade ago. Michael W. McConnell, who served with Gorsuch on the appeals court and is now a law professor at Stanford, said his former colleague's Colorado background would add something distinctive to the Supreme Court.

"He's a Westerner," McConnell said. "There are so many cases that have to do with the West, and I also think the cultural sensibilities of the West are different. He's an outdoorsman, and the Supreme Court needs a little bit more geographical diversity."

Gorsuch has criticized liberals for turning to the courts rather than legislatures to achieve their policy goals and has called for limiting the power of federal regulators.

Nan Aron, the president of the Alliance for Justice, a liberal group, said Gorsuch's stance on federal regulation was "extremely problematic" and "even more radical than Scalia."

"Not requiring courts to defer to agency expertise when an act of Congress is ambiguous," she said, "will make it much harder for federal agencies to effectively address a wide variety of critical matters, including labor rights, consumer and financial protections, and environmental law."

In a speech two months after Scalia died, Gorsuch endorsed the justice's approach to the law. "If you're going to be a good and faithful judge," he said, quoting Scalia, "you have to resign yourself to the fact that you're not always going to like the conclusions you reach. If you like them all the time, you're probably doing something wrong."

In a 2005 essay in National Review, written before he became a judge, he criticized liberals for preferring litigation to the political process.

"American liberals have become addicted to the courtroom, relying on judges and lawyers rather than elected leaders and the ballot box, as the primary means of effecting their social agenda on everything from gay marriage to assisted suicide to the use of vouchers for private-school education," he wrote. "This overweening addiction to the courtroom as the place to debate social policy is bad for the country and bad for the judiciary."

Like Scalia, Gorsuch is a lively and accessible writer. Consider the first paragraph of a 2011 libel decision, which dispensed with the throat-clearing and jargon that characterizes many judicial opinions.

"Can you win damages in a defamation suit for being called a member of the Aryan Brotherhood prison gang on cable television when, as it happens, you have merely conspired with the Brotherhood in a criminal enterprise?" Gorsuch wrote. "The answer is no. While the statement may cause you a world of trouble, while it may not be precisely true, it is substantially true. And that is enough to call an end to this litigation as a matter of law."

Gorsuch's writing differs from Scalia's in one major way: His tone is consistently courteous and mild, while some of Scalia's dissents were caustic and wounding.

If Gorsuch is confirmed, the court will return to a familiar dynamic, with Justice Anthony M. Kennedy, a moderate conservative, holding the decisive vote in many closely divided cases.

Gorsuch moved to Washington as a teenager when his mother, Anne M. Gorsuch, joined the administration of President Ronald Reagan as the first woman to lead the Environmental Protection Agency. Gorsuch, known after her remarriage as Anne Burford, resigned under fire from Congress after 22 months in the job.

After graduating from high school in Washington, Gorsuch went on to Columbia University and Harvard Law School. He also attended Oxford University in England as a Marshall Scholar, graduating with a doctorate in legal philosophy.

He served as a law clerk for a year to Judge David B. Sentelle, a conservative member of the U.S. Court of Appeals for the District of Columbia Circuit.

More than a decade later, as a lawyer in private practice, Gorsuch wrote a letter to the editor of The Washington Post. It was a display of loyalty, commitment to accuracy and playfulness.

The letter corrected details in an article about Sentelle, which had said that the judge had named his daughter Reagan after the president who appointed him to the court.

"But Judge Sentelle's daughter was born in 1970, and Ronald Reagan appointed Mr. Sentelle to the court in 1985, when his daughter was 15," Gorsuch wrote. "This is at least the second time The Post has printed this apocryphal story."

After the appeals court clerkship, Gorsuch served as a law clerk to Justice Byron R. White, then a retired member of the Supreme Court. As is the court's custom, White shared his clerk with an active member of the court, Justice Anthony M. Kennedy. (When Gorsuch joined the Denver appeals court, Kennedy administered the oath of office.)

Gorsuch then practiced law for a decade at Kellogg, Huber, Hansen, Todd, Evans & Figel, a Washington law firm, before serving in the Justice Department from 2005 to 2006.

He is the author of "The Future of Assisted Suicide and Euthanasia," which was published in 2006 by Princeton University Press. The book argued that laws banning those practices should be retained.

In the Almanac of the Federal Judiciary, which conducts anonymous interviews with lawyers to assess judges, Gorsuch received positive reviews. He was described as engaged and courteous on the bench.

In a 2002 article reflecting on White's death, Gorsuch criticized the Senate's handling of judicial confirmations. "Some of the most impressive judicial nominees are grossly mistreated," he said, mentioning two candidates for the federal appeals court in Washington whom he said were "widely considered to be among the finest lawyers of their generation."

One was John G. Roberts Jr., who went on to become chief justice of the United States. The other was Judge Merrick B. Garland, who was confirmed to the appeals court in 1997 after a long delay but whose nomination to the Supreme Court last year was blocked by Senate Republicans.