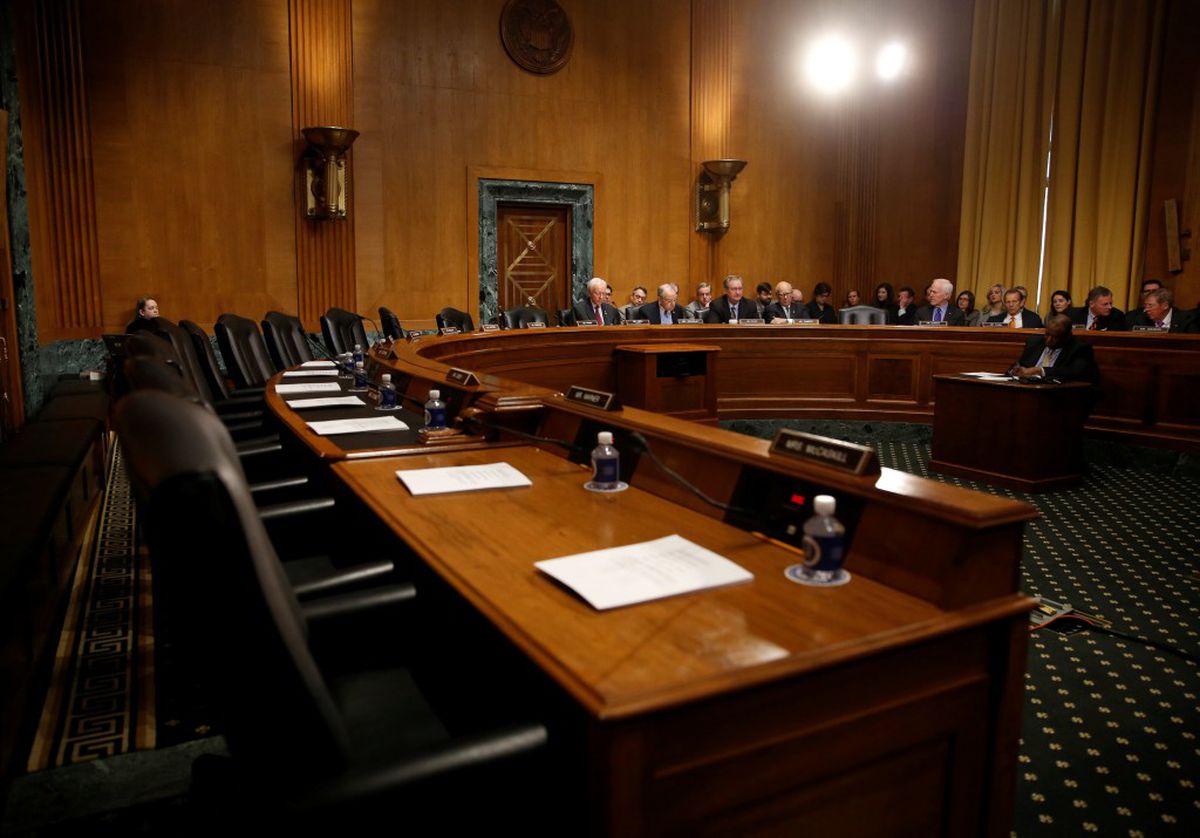 Democrats’ seats are empty during a boycott of the Senate Finance Committee executive session on the nomination of Steven Mnuchin to be treasury secretary on Capitol Hill in Washington, February 1, 2017. REUTERS/Kevin Lamarque

Democrats’ seats are empty during a boycott of the Senate Finance Committee executive session on the nomination of Steven Mnuchin to be treasury secretary on Capitol Hill in Washington, February 1, 2017. REUTERS/Kevin Lamarque

Republicans lashed out angrily at Democrats trying to stall the president's nominees at the committee level, suspending the rules to approve two nominees, Rep. Tom Price, R-Ga., for secretary of health and human services and Steve Mnuchin to lead the Treasury.

Republicans also advanced the nomination of Sen. Jeff Sessions, R-Ala., for attorney general, and they finalized confirmation of former Exxon Mobil chief executive Rex Tillerson for secretary of state by a vote of 56 to 43.

The day was not without its setbacks for Republicans, however. Two GOP senators, Lisa Murkowski of Alaska and Susan Collins of Maine, signaled they do not plan to support the president's nominee for education secretary, Betsy DeVos – leaving Democrats one vote shy of the number needed to doom her nomination. Both senators cited their uncertainty about whether DeVos, an avid supporter of charter schools and school vouchers, is sufficiently committed to helping public schools.

The drama on Capitol Hill unfolded at a time when Democrats, under intense pressure from liberal activists, have become increasingly emboldened to block Trump's agenda and appointees.

Democrats were enraged by the administration's executive order issued over the weekend to bar travel to the United States by those from seven majority-Muslim countries. They galvanized around the firing of acting attorney general Sally Yates, who was dismissed for refusing to enforce the ban. And some Democrats were also angered by the president's nomination of Judge Neil Gorsuch to the Supreme Court on Tuesday night, arguing that Republicans cannot expect them to swiftly approve the selection after their blockade of then-President Barack Obama's nominee, Judge Merrick Garland.

Lawmakers began meeting with Gorsuch on Wednesday. Although several moderate Democrats said they remain open to the federal appeals judge, others, including Senate Minority Leader Charles Schumer, D-N.Y., vowed to block him with a filibuster, which Republicans would need 60 votes to overcome.

Meanwhile, Trump urged Senate Republican leaders Wednesday to be prepared to tear up the rules of the Senate and "go nuclear" if Democrats try to block Gorsuch – that is, change long-standing Senate rules to permit the confirmation of a Supreme Court nominee with a simple majority vote.

"I would say, 'If you can, Mitch, go nuclear,' " Trump said, referring to Senate Majority Leader Mitch McConnell, R-Ky. "Because that would be an absolute shame if a man of this quality was put up to that neglect. I would say it's up to Mitch, but I would say, 'Go for it.' "

There is little Democrats can do to prevent final confirmation of any of Trump's picks because the GOP needs only 51 votes to approve them in the full Senate and there are 52 Republican senators.

With Tillerson, six high-ranking Trump nominees have been approved by the full Senate: Elaine Chao as transportation secretary; retired generals John Kelly and James Mattis at the Department of Homeland Security and the Pentagon; Mike Pompeo to lead the CIA; and Nikki Haley to serve as U.S. ambassador to the United Nations.

Over in the Senate Judiciary Committee, Republicans celebrated Sessions' approval on a party-line vote of 11 to 9, with Democrats present and opposing his nomination.

"Senator Sessions has devoted his life to public service, and his qualifications cannot be questioned," Senate Majority Whip John Cornyn, R-Texas, said in a statement following the Sessions vote. "He has a history of protecting and defending the Constitution and the rule of law for all people."

But a committee hearing to approve Trump's pick for the Environmental Protection Agency, Scott Pruitt, was delayed after Democrats failed to show up. So was a hearing to vet Rep. Mick Mulvaney, R-S.C., to lead the Office of Management and Budget, which was delayed Wednesday, although the delay happened before the panel convened.

And on Tuesday, the Senate Energy and Natural Resources Committee approved the nominations of former Texas governor Rick Perry to be energy secretary and Rep. Ryan Zinke, R-Mont., to be interior secretary.

[VA 'will not be privatized under my watch,' Cabinet nominee says in clash with Trump team]

Republicans came to the aid of Trump's nominees after Democrats dipped into their procedural arsenal to stall many of them at committee hearings on Monday, echoing growing liberal anger in the streets.

"Democrats are going to keep fighting back," said Sen. Patty Murray, D-Wash. "We are going to stand with people across the country. And we will keep pushing Republicans to put country above party, and stand with us."

That stance was met with praise from liberal activists, labor unions and constituents.

"We're seeing someone who came into office with a historic popular vote loss come in and push a radical, unconstitutional agenda," said Kurt Walters, the campaign director of the transparency group Demand Progress. "Yes, radical and bold tactics are what senators should be using in response."

At Senate Finance on Wednesday morning, Chairman Orrin Hatch, R-Utah, rammed through Mnuchin and Price after Democrats did not show up for that hearing. Their nominations head to the Senate floor for an up-or-down vote, although it is unclear when that will occur.

"Republicans on this committee showed up to do our jobs. Yesterday, rather than accept anything less than their desired outcome, our Democrat colleagues chose to cower in the hallway and hold a press conference," Hatch charged.

Incensed by the Democratic boycott, GOP members spent Tuesday exploring how they could quickly approve Price and Mnuchin and punish Democrats for their surprise move.

Committee staffers scoured the panel's lengthy rule book and discovered it permits the majority party to temporarily suspend the rules and meet without Democrats. Hatch said he consulted the Senate parliamentarian, who serves as a referee on all disputes in committees and on the Senate floor, who said doing so was within bounds.

After weeks of back-and-forth about Trump's nominees, "the boycott was the last straw," explained Sen. Johnny Isakson, R-Ga., who pushed staffers to explore their options.

"The ultimate result was not in doubt. Getting to the ultimate was in doubt," he added. "For us, it was going to get done. Why not find a way to do it since they weren't going to show up for a committee meeting? To them, slowing down the process just gave them the time to do that and try to make cases against us."

Democrats were told Wednesday morning that Finance would reconvene. But they were not given any indication that Hatch would alter the rules, according to a spokesman for Sen. Ron Wyden, D-Ore., the ranking Democrat on the committee.

Democrats complained that Mnuchin misled the committee by initially misstating his personal wealth on a financial disclosure form and misrepresenting under oath how OneWest Bank, which he led, scrutinized mortgage documents. And Wyden pointed to discounted stock buys Price made in a health-care company, first reported by the Wall Street Journal.

"We felt it was important to say we need this information to do our job," Wyden said Wednesday after Hatch forced the party-line vote.

Other Republicans dismissed accusations that the GOP is bending Senate procedure to quickly confirm Trump's picks.

"I think people expect senators to show up for work and be there. It's unfortunate," said Sen. Jeff Flake, R-Ariz.

Democrats defended their actions as a necessary step to register their frustration after a small group of Republicans refused to allow them to question the nominees once new information came to light.

Over at the Environment and Public Works Committee, where Pruitt is being considered, Republicans vented their frustration at the lack of Democrats who came.

A GOP aide displayed a chart designed to show how quickly past EPA nominees were confirmed. Notably missing, however, was Obama's second EPA administrator, Gina McCarthy. Nominated in March 2013, McCarthy was not confirmed until July of that year – at one point, Republicans on the Environment Committee boycotted a meeting to demand that McCarthy answer more questions.

"That was not a new president, newly elected," said Sen. John Barrasso, R-Wyo., arguing that the GOP boycott differed because it happened during Obama's second term. "A newly elected president, I believe, has a right to their Cabinet."

The Washington Post's Sean Sullivan and Karoun Demirjian contributed to this report.