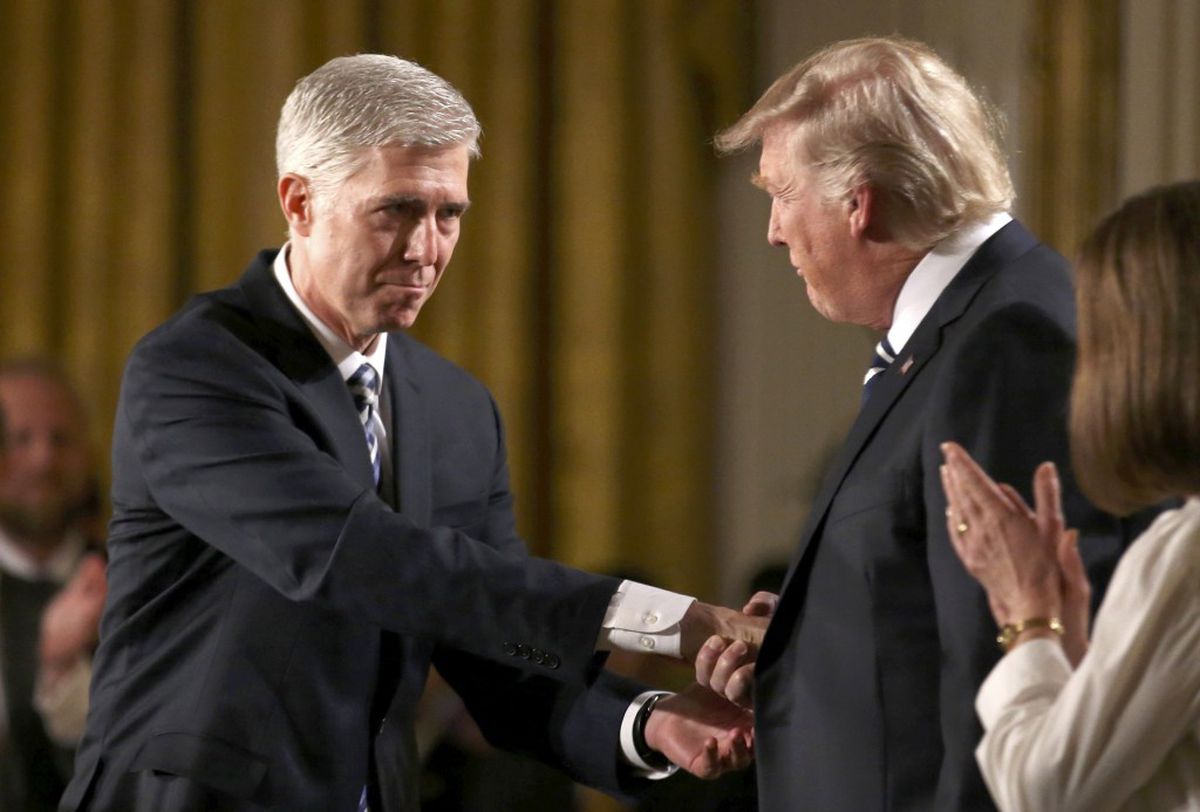 WASHINGTON — President Donald Trump, seeming to relish a fight with Democrats over his nominee for the Supreme Court, on Wednesday encouraged the Senate majority leader, Mitch McConnell, R-Ky., to invoke the so-called nuclear option and abandon the 60-vote threshold for Supreme Court nominees.

"If we end up with that gridlock, I would say, 'If you can, Mitch, go nuclear,'" the president said on Wednesday from the Roosevelt Room of the White House. "Because that would be an absolute shame if a man of this quality was put up to that neglect. I would say it's up to Mitch, but I would say, 'Go for it.'"

His call for a battle came as Democrats began grappling on Wednesday with their most consequential strategic choice to date in the age of Trump: how aggressively to oppose the president's choice, federal appeals court judge Neil M. Gorsuch.

In choosing a respected, plainly qualified and deeply conservative jurist, Trump has dared Democrats to pursue the kind of blanket obstructionism that they long accused Republicans of embracing during the Obama administration.

But for a party that has often strained to match the fury and zeal of its base during the wave of anti-Trump activism since the election, a full-scale showdown may prove unavoidable, doubling as a referendum on resistance tactics to a White House that liberals fear and abhor.

Democrats intend to remind the public, with great frequency, about Republicans' treatment of Merrick B. Garland, President Barack Obama's nominee to fill the vacant seat last year, who was blocked from even receiving a hearing. McConnell said a justice should not be seated during an election year, even though there is no prohibition on such action.

On Wednesday, as Gorsuch made his initial courtesy calls with senators on Capitol Hill, Republicans assumed the tone of a party in power, appealing for unity and adherence to Senate custom.

Gorsuch's first call after the announcement of his nomination was to Garland, as a gesture of respect, according to Ron Bonjean, a spokesman for the nomination effort.

The nominee was also joined on Wednesday by Kelly Ayotte, a well-liked former Republican senator from New Hampshire, who is helping to shepherd him through the nominating process months after losing her re-election bid.

After greeting Gorsuch during his visit, McConnell asked Democrats to heed their own calls to restore the court to its rightful size.

"I would invite Democrats who spent many months insisting we need nine to join us in following through on that advice," he said from the Senate floor.

So far, Democrats have appeared unmoved, and occasionally seething.

Sen. Chuck Schumer of New York, the Democratic minority leader, said Gorsuch must meet the 60-vote threshold required to overcome a filibuster in the Senate.

History — and especially recent history — demanded it, he suggested.

"If this nominee cannot meet the same standard that Republicans insisted upon for President Obama's Supreme Court nominees — 60 votes in the Senate — then the problem lies not with the Senate but with the nominee," Schumer said.

He said Trump's White House had demonstrated "less respect for the rule of law than any in recent memory," placing a "special burden on this nominee to be an independent jurist."

Transfers of power from one party to the other often compel lawmakers to shift their perspectives, leaning on arguments they once rejected. But the bipartisan whiplash in the Senate has been especially striking.

Since Trump's announcement, the two parties have rushed headlong into an embrace of the other's former talking points. Republicans cast Gorsuch as an unassailable choice, as Democrats had done with Garland, trumpeting his record on the federal Court of Appeals and his impressive credentials.

They reminded some Senate Democrats that they had voted to confirm Gorsuch to a lower court once upon a time, as some Republicans had for Garland. Senators like Ted Cruz, R-Texas — who, before the election, raised the possibility of blocking a nomination indefinitely if Hillary Clinton won the presidency — have insisted on swift action.

And some Democrats have argued, after nearly a year spent lamenting a vacancy on the court after Justice Antonin Scalia's death, that Gorsuch must not be allowed to assume the seat.

"The Democrats should treat Trump's SCOTUS pick with the exact same courtesy the GOP showed Merrick Garland," Dan Pfeiffer, a former senior adviser to Obama, wrote on Twitter. "Don't flinch, don't back down."

Reactions to Gorsuch's nomination among Democrats seemed to sort themselves into three camps: There were some cautious statements, often from moderate Democrats in states that Trump had won, urging careful consideration of the pick. There were policy-based concerns raised about Gorsuch's trail of conservative opinions and leanings. And there were arguments that did not focus much on Gorsuch at all, framing the choice of any judge not named Merrick Garland to be illegitimate.

"This is a stolen seat," said Sen. Jeff Merkley, D-Ore. "This is the first time in American history that one party has blockaded a nominee for almost a year in order to deliver a seat to a president of their own party. If this tactic is rewarded rather than resisted, it will set a dangerous new precedent in American governance."

At the same time, Democrats and progressive activists have begun zeroing in on elements of Gorsuch's record. Among their other concerns, he has voted in favor of employers, including Hobby Lobby, who cited religious objections while refusing to provide some forms of contraception coverage to female workers.

Schumer said Gorsuch had "repeatedly sided with corporations over working people" and demonstrated "a hostility toward women's rights."

Even before some Democrats weighed in, Republicans dismissed any complaints about Gorsuch as empty posturing. Some lawmakers were more creative than others.