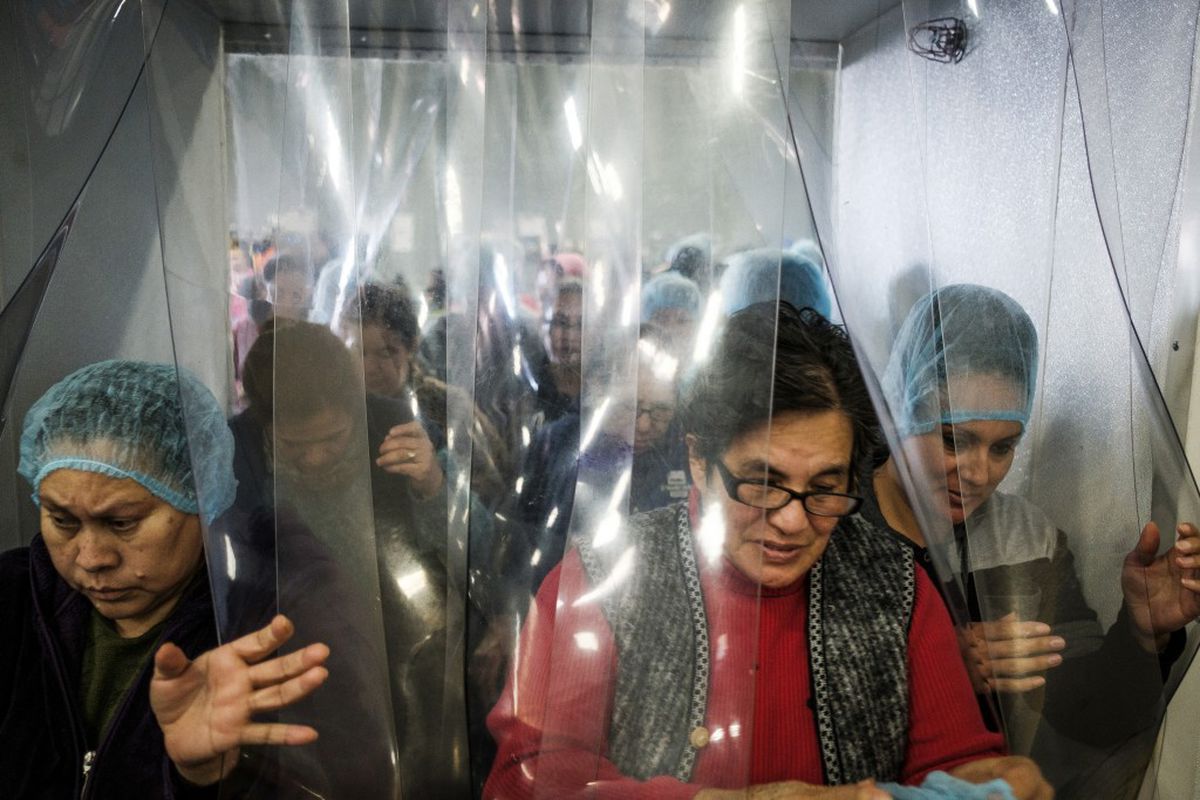 Workers return from their lunch breaks to a radicchio packing plant in Le Grand, Calif., Jan. 27, 2017. President Donald Trump’s executive orders upending immigration laws are alarming farmers in the Republican stronghold of Central Valley, who are wondering what they could mean for their workers, most of whom are unauthorized, and the businesses that depend on them. (Max Whittaker/The New York Times)

Workers return from their lunch breaks to a radicchio packing plant in Le Grand, Calif., Jan. 27, 2017. President Donald Trump’s executive orders upending immigration laws are alarming farmers in the Republican stronghold of Central Valley, who are wondering what they could mean for their workers, most of whom are unauthorized, and the businesses that depend on them. (Max Whittaker/The New York Times)

MERCED, Calif. — Jeff Marchini and others in the Central Valley bet their farms on the election of Donald Trump. His message of reducing regulations and taxes appealed to this Republican stronghold, one of Trump's strongest bases of support in the state.

As for his promises about cracking down on unauthorized immigrants, many assumed Trump's pledges were mostly just talk. But two weeks into his administration, Trump has signed executive orders that have upended the country's immigration laws. Now farmers in Merced are deeply alarmed about what the new policies could mean for their workers, most of whom are unauthorized, and the businesses that depend on them.

"Everything's coming so quickly," Marchini said. "We're not loading people into buses or deporting them, that's not happening yet."

As he looked out over a crew of workers bent over as they rifled through muddy leaves to find purple heads of radicchio, he said that as a businessman, Trump would know that farmers had invested millions of dollars into produce that is growing right now, and that not being able to pick and sell those crops would represent huge losses for the state economy. "I'm confident that he can grasp the magnitude and the anxiety of what's happening now."

Trump's immigration policies could transform California's Central Valley, a stretch of lowlands that extends from Sacramento to Bakersfield. About 70 percent of all farmworkers here are living in the United States illegally, according to researchers at University of California, Davis. The impact could reverberate throughout the valley's precarious economy, where agriculture is by far the largest industry. With 6.5 million people living in the valley, the fields in this state bring in $35 billion a year and provide more of the nation's food than any other state.

The consequences of a smaller immigrant workforce would ripple not just through the orchards and dairies, but also to locally owned businesses, restaurants, schools and even seemingly unrelated industries, like the insurance market.

Many feel vindicated by the election, and signs declaring "Vote to make America great again," still dot the highways. But in conversations with nearly a dozen farmers, most of whom voted for Trump, each acknowledged that they relied on workers who provided false documents. And if the administration were to weed out illegal workers, farmers say their businesses would be crippled. Even Republican lawmakers from the region have supported plans that would give farmworkers a path to citizenship.

"If you only have legal labor, certain parts of this industry and this region will not exist," said Harold McClarty, a fourth-generation farmer in Kingsburg whose operation grows, packs and ships peaches, plums and grapes throughout the country. "If we sent all these people back, it would be a total disaster."

McClarty is not just concerned about his business, but also about his workforce, he said. Many of them have worked for him year-round for more than a decade, making at least $11 an hour. After immigration officials audited his employee records a few years ago, he was forced to let go of dozens of employees.

"These people had been working for us for a long time, and we depended on them."

Now he worries that a Trump administration could mandate a Homeland Security Department program called E-verify, which was aimed at stopping the use of fraudulent documents. In all but a few states, the program is voluntary and only a small fraction of businesses use it.

Farmers here have faced a persistent labor shortage for years, in part because of increased policing at the border and the rising prices charged by smugglers who help people sneak across. The once-steady stream of people coming from rural towns in southern Mexico has nearly stopped entirely. The existing field workers are aging, and many of their children find higher-paying jobs outside agriculture.

Many growers here and across the country are hopeful that the new administration will expand and simplify H-2A visas, which allow them to bring in temporary workers from other countries for agricultural jobs. California farmers have increasingly come to rely on the program in the last few years.

But McClarty and others say that legalizing the existing workforce should be the first priority. While they support the idea of deporting immigrants who have been convicted of serious crimes, they oppose forcing people to leave the country for minor crimes, like driving without a license. Since the election, they have continued to call their congressional representatives and lobbied through trade associations, like the Western Growers Association, whose chief executive is part of Trump's agricultural advisory board.

Farmers are also anxiously awaiting the administration's plans to alter long-standing trade agreements. Trump has said he will pull out of the North American Free Trade Agreement if he cannot negotiate better terms for the United States. Growers would benefit if Trump negotiated more favorable terms. But backing out of the agreement entirely could provoke retaliation from Mexico that would hurt California's agricultural industry, which earned $21 billion from trade last year.

Yet, many of Trump's supporters say they are counting on him to follow through on his promises. Dan Stein, president of the Federation for American Immigration Reform, said that limiting the use of foreign labor would push more Americans into jobs that had primarily been performed by immigrants.

"It doesn't matter if it's programming computers or picking in fields," he said, "Any time you're admitting substitutes for American labor you depress wages and working conditions and deter Americans."

The prospect has business owners in the valley on edge. Patricia Pantoj runs a travel agency in Madera, north of Fresno, where the city's approximately 60,000 residents are predominantly Latino and work in the fields. This year, she said, fewer people than ever before traveled back to their hometowns in Mexico.

"They didn't want to risk it," she said. "Everyone is scared, even if they have papers."

A few doors away from the travel agency, Maria Valero said all the customers at her gift shop were unauthorized.

"If they went away, I would be out of business tomorrow," she said.

Jhovani Segura, an insurance agent in Firebaugh, near the southern end of the valley, said that as much as 80 percent of their new car insurance policies came from unauthorized immigrants who, under a new state law, became eligible for driver's licenses in 2015.

"If there were mass deportations, we would have to cancel half of our policies," he said.

In Ceres, north of Merced, the public school district is the largest employer by a large number, and many of the jobs were created to support the children of immigrants. Administrators say any crackdown would result in huge job losses and would reduce funding, which is distributed by the state based on need, for all the children in the district.

Most of the workers in McClarty's vineyards and orchards have well-established lives in the area.

Javier Soto, 46, bought a home for his family of five in Reedley, a city of 25,000 that calls itself "the world's fruit basket." He has worked for McClarty's farm for the last six years and his supervisor knows he is here without papers.

"It is more scary now that he is really the president and we see what he is doing," Soto said.

They are hopeful Trump will not make good on most of his threats. "Quien más habla, menos hace," they tell each other — the more you talk, the less you do. There are too many of them, they reason, to throw them all out.

"We're just waiting and praying, hoping that somebody can convince them that we are not hurting anyone by being here," said Isabel Rios, 49, who has been picking grapes for the last two decades. Like most women in the fields, she covers her face with a bandanna to protect against the blaring sun, dust and pesticides. Her two children, 9 and 18, are U.S.-born citizens and she worries what will happen to them if she is sent back to Mexico. "Who will benefit if we are not here?"

Marchini, the radicchio farmer, said he felt similarly after seeing generations of workers on his family farm send their children to college and join the middle class. Marchini's family has farmed in the valley for four generations and he grew up working side by side with Mexican immigrants.

He said that no feasible increase in wages or change in conditions would be enough to draw native-born Americans back into the fields.

It was the other conservatives, Marchini said, who were out of touch about how to deal with foreign workers. "If you find a way to get in here," he said, "there's a need for what you do."