No plan to fix US missile defense system 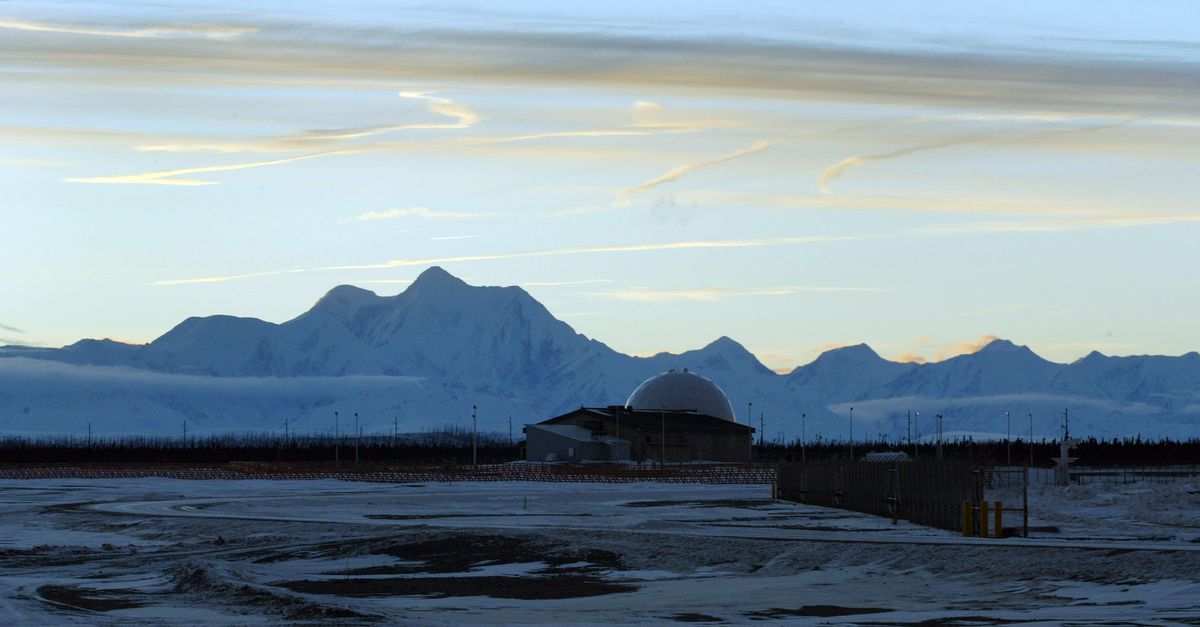 WASHINGTON — The Pentagon is pushing ahead with an expansion of the nation's homeland missile defense system, despite a newly recognized deficiency that affects nearly all the system's rocket interceptors, a Los Angeles Times investigation has found.

The problem threatens the performance of small thrusters attached to the interceptors. In the event of a nuclear attack, the thrusters would be relied on to steer interceptors into the paths of enemy warheads, destroying them.

If a thruster malfunctioned, an interceptor could fly off course and miss its target, with potentially disastrous consequences. The interceptors are the spine of the Ground-based Midcourse Defense system, or GMD, the nation's primary protection against a missile strike by North Korea or Iran.

The problem affecting the thrusters came to light as a result of the system's most recent flight test, on Jan. 28, 2016, when an interceptor was launched from Vandenberg Air Force Base in California. The test was designed to show whether a redesign of the thrusters had solved persistent problems with the component.

It did not go as planned. One of the interceptor's four thrusters shut down during the test, causing the interceptor to veer far from its intended course.

The U.S. Missile Defense Agency and its lead GMD contractors nevertheless touted the exercise as a success, making no mention of the malfunction. The Times disclosed the problem in an article published July 6.

Now, the first public explanation for the thruster malfunction has emerged in Pentagon documents and from interviews with missile-defense specialists.

A review board formed by the missile agency linked the failure to a circuit board that powers the thrusters. The "most likely" explanation, the panel said, was that a "foreign object" in the interceptor's internal guidance module came loose, fell onto the board and caused a short circuit.

The review board did not say what the foreign object was, but government and independent scientists say it could have been a wire fragment, a piece of soldering material or other debris.

Of the GMD system's 37 operational interceptors, 34 are equipped with older circuit boards vulnerable to the same kind of incident, according to missile defense specialists, including former and current government officials.

The missile agency is in the midst of expanding GMD to a planned total of 44 interceptors by the end of this year. The 10 newest interceptors will have circuit boards made with "improved manufacturing processes," an agency spokesman said.

But agency officials do not plan to retrofit or repair the older circuit boards, which were manufactured differently. Spokesman Christopher Johnson, in written responses to questions from The Times, said that based on the review board's analysis, "no corrective actions are needed."

Independent missile defense experts, however, said the review board's findings signal a weakness in the 34 older interceptors, which now make up more than 90 percent of the fleet. When the expansion is finished, they will still account for three-fourths.

"If there's a foreign object in one unit, it's sort of whistling past the graveyard to assume that that's a once-in-a-lifetime event," said L. David Montague, a retired president of missile systems for Lockheed Corp.

Montague, who was co-chairman of a National Academy of Sciences panel that assessed U.S. missile defense systems in 2012 at the request of Congress, said each GMD interceptor should be subjected to rigorous ground testing to simulate the intense vibrations experienced during flight. The aim would be to see whether more foreign objects shake loose.

Laura Grego, a physicist who led an in-depth study of GMD published last year by the Union of Concerned Scientists, questioned why the missile agency was not pausing its expansion of the system to address the issue.

"What is the point of using tests to identify problems if you don't fix those problems afterwards?" Grego said by email. "At some point you have to decide if you mean to build something that works or something that simply looks like it works."

One way to protect circuit boards from tiny foreign objects is to spray the boards with a thin layer of plastic. The process, known as "conformal coating," has long been standard in both commercial and military manufacturing.

After the test-flight failure, an expert consultant to the Missile Defense Agency pointed out the availability of this remedy in a closed-door meeting at the agency's headquarters at Fort Belvoir, Va. The agency's senior engineering staff members were present, according to individuals with knowledge of the session.

It is unclear whether the improved manufacturing process for circuit boards in the newest interceptors includes conformal coating.
Johnson said he could not detail how the newer circuit boards differ from the older ones because both are part of an "active weapon system."

Johnson did say that agency officials "are absolutely confident in (their) ability to defend the homeland from ballistic missiles."
Former Assistant Defense Secretary Philip E. Coyle III, who led the Pentagon's office of operational testing and evaluation for six years, said the January 2016 test failure was cause for serious concern about GMD's reliability.

"If the circuitry caused a failure, that's a bad thing," Coyle said. "One out of four (thrusters) failed, and that's important. I don't think anybody should whitewash that."

The nation's defense against a massive nuclear attack by China or Russia relies on deterrence: the Cold War doctrine that none of the major nuclear powers would ever strike first, for fear of massive retaliation.

The GMD system, in contrast, was designed to thwart a "limited" strike by a non-superpower such as North Korea by intercepting and destroying incoming warheads.

The interceptors are multistage rockets, each with a 5-foot-long "kill vehicle" at the tip. In the event of an attack, interceptors would climb from their underground silos at Vandenberg and Fort Greely, Alaska, and soar beyond the upper atmosphere.

In space, the kill vehicle would separate from its boost rocket. The thrusters would fire rapidly to keep the vehicle on course during the final approach to its target.

The first GMD interceptors were made operational in 2004 by order of President George W. Bush, whose administration warned that America was at imminent risk of attack.

The system's persistent reliability problems have been traced to the rapid pace at which it was developed and fielded.

In flight tests, which are scripted to maximize the chances for success, GMD interceptors have failed to destroy their targets about half the time.

The thrusters have been at the center of several of those failures.
After a January 2010 test in which a thruster shut down, officials blamed a missing fastener in the thruster assembly. In December of that year, an interceptor again missed its target, and the failure was attributed to severe vibrations caused by the thrusters' "rough combustion" of fuel.

In 2011, Lt. Gen. Patrick J. O'Reilly, then the missile agency's director, shut down production of interceptors in an effort to correct technical shortcomings exposed by the test failures.

O'Reilly retired in late 2012, and production resumed under his successor, Vice Adm. James D. Syring, as the Obama administration prepared to expand the GMD fleet — a decision supported by bipartisan majorities in Congress.

The downside of this approach has been diminished reliability. In light of the system's spotty performance in tests, the missile agency projects that four or five interceptors would have to be fired at any single enemy warhead — an imbalance that could quickly exhaust the fleet.

In the January 2016 test, the interceptor that was launched from Vandenberg, on the Santa Barbara County coast, was supposed to perform maneuvers before making a close flyby of a mock warhead in space.

As the flight unfolded, one of the thrusters stopped firing. Project engineers had planned for the interceptor to fly within a narrow "miss distance" of its target. In fact, the closest it came was a distance 20 times greater than expected, according to Pentagon scientists who spoke on condition of anonymity.

The review board, appointed by Syring, was made up of officials and engineers who oversaw the test and stood to share responsibility for any deficiencies in the interceptor's performance.

Syring declined to be interviewed for this article.

Johnson, the missile agency spokesman, said the review board's report remains classified. The findings, however, are summarized in the most recent annual report of the Pentagon's Office of Operational Test and Evaluation. The voluminous survey of U.S. weapons systems is prepared for Congress and the secretary of Defense.

The latest edition, released last month, rates the reliability of GMD and the day-to-day "availability," or readiness, of its interceptors as "low," and says that tests have revealed unspecified "new failure modes."

Regarding the January 2016 exercise, the report said all four of the interceptor's thrusters "turned on and off as commanded" at the outset. But one thruster could not be restarted after the circuit board that powered it "experienced a short," the report said.

The report cited the review board's finding that "foreign object damage" was the most likely cause.

The test office's reports are tracked closely by congressional aides and can influence support for a defense system. Although the office writes the reports, its analysts typically depend on the relevant agency or service branch to confirm technical details.

Tensions arose over how the office would characterize the January 2016 flight test.

The missile agency insisted that the report say the redesigned thrusters _ technically known as alternate divert thrusters or ADTs _ worked flawlessly, and that the failure stemmed from an unrelated problem with the interceptor's electronics.

"They made a big deal about, 'The ADTs worked as designed.' And in fact, when you look at it, no, they didn't," said a government official familiar with the matter. "Because the one thruster didn't fire … . If this was actually an intercept, it probably would have missed."

The test office report ultimately said the suspect circuit board was "associated with" the thruster. But the report accommodated the missile agency by saying the circuit board "is not considered part of the ADT subsystem."

In fact, though the thruster itself was not found to be at fault, it needed the circuit board for power and could not function without it.
GMD has cost taxpayers more than $40 billion to date. In a report last year, the U.S. Government Accountability Office said the system's performance had been "insufficient to demonstrate that an operationally useful defense capability exists."

The Pentagon is studying locations for a possible third GMD site in the eastern half of the United States. The site would house 20 to 60 interceptors and cost billions of dollars.