Fact-checking Trump's first speech to Congress, and the Democratic response 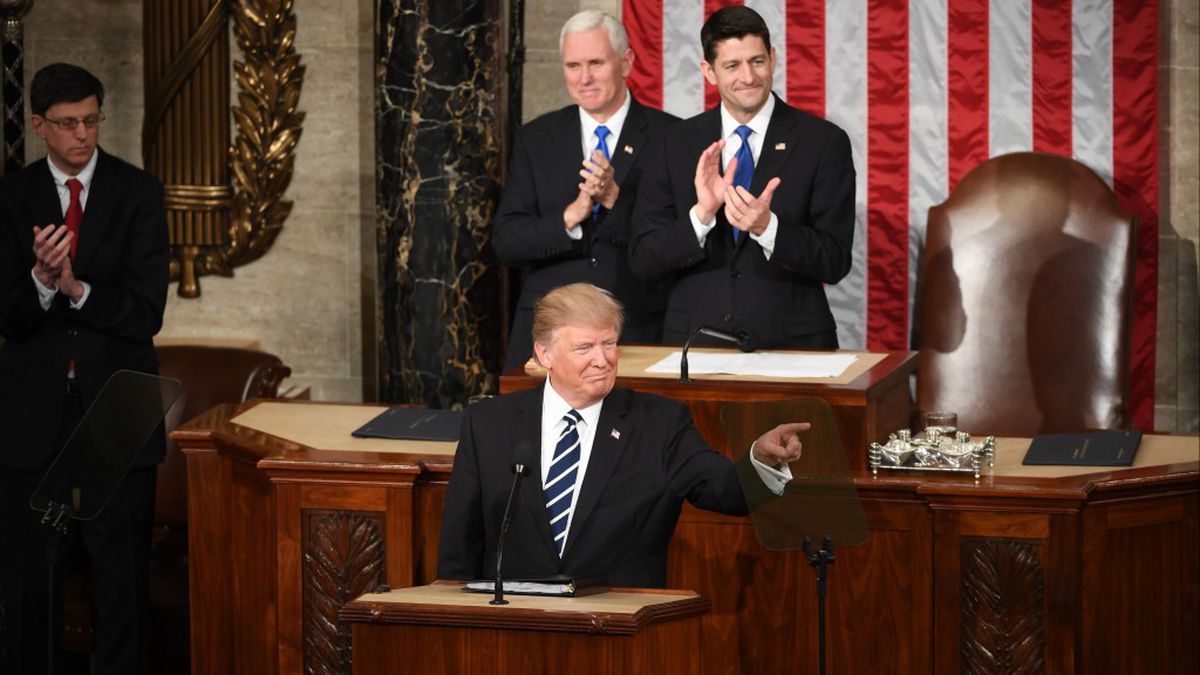 President Donald Trump gestures during his first address before a joint session of Congress on Tuesday, Feb. 28, 2017. (Washington Post photo by Jonathan Newton)

President Donald Trump gestures during his first address before a joint session of Congress on Tuesday, Feb. 28, 2017. (Washington Post photo by Jonathan Newton)

During his first address before both houses of Congress, President Donald Trump read from prepared remarks and, in another break from routine, often used actual statistics to back up his points. Sometimes he was accurate, and sometimes he stretched the truth, although there were few, if any, outright falsehoods.

"Over 43 million Americans are on food stamps"

THE NUMBER IS CORRECT: According to the Agriculture Department, 43.3 million Americans use food stamps. As with the poverty rate, though, the number has been trending downward over the past several years. — Dana Goldstein

The U.S. lost "more than one-fourth of our manufacturing jobs" from NAFTA

NOT DUE TO NAFTA: The United States has lost a lot of factory jobs since 2000, but the biggest reason is technological progress, not foreign competition. America's manufacturing output is at the highest level in history — it just doesn't take as many workers to make things anymore. Some jobs have been lost to foreign competition, but studies assign a modest role to NAFTA. — Binyamin Appelbaum

SOMEWHAT MISLEADING: FBI crime statistics estimate that there were 15,696 murders in 2015, up 10 percent from 2014. (Last year's figures are not available yet.) The increase was largely driven by street crime in a handful of large cities, like Chicago and Baltimore.

[The backstory behind the rare disease patient Trump highlighted to Congress]

But one reason for such a large uptick was that crime had been falling for a generation. In 1991, the FBI estimated that there were 24,703 murders. — Charlie Savage

Health care premiums "have increased by double and triple digits"

CHERRY-PICKED: Double-digit increases in premiums are common. Trump cited Arizona's 116 percent increase; it is the only state that experienced a triple-digit hike. Premiums for a popular group of health plans sold on HealthCare.gov rose this year by an average of 25 percent, according to the Obama administration.

Likewise, his statement that "Obamacare is collapsing" is an exaggeration. While premiums have risen and some insurers have pulled back, millions of people with modest incomes have obtained coverage under the Affordable Care Act. —Robert Pear

"We are removing gang members, drug dealers and criminals"

NOT A BIG CHANGE: President Barack Obama had already ordered the Department of Homeland Security to make serious criminals a primary focus of his deportation efforts. Trump's biggest change has been to make all undocumented immigrants candidates for deportation. — Nicholas Kulish

Our borders are "wide open for anyone to cross"

NOT EVERYWHERE: People cannot just walk across the borders without fear of interception.

Some do sneak across, but the borders are guarded by 21,000 Border Patrol agents along with a similar number of Customs and Border Protection officers at the 325 official ports of entry, which include airports, seaports and land border crossings. — Ron Nixon

MAYBE A LITTLE: Economists are deeply divided about the effect of immigration on the wages of native-born workers. Some see evidence that increased competition has modestly reduced the wages for some kinds of work, particularly low-skilled labor.

But the effects are relatively small — perhaps a few percentage points — and the overall effect on the economy is most likely positive. — Binyamin Appelbaum

NOT IGNORED: The killings by undocumented immigrants mentioned in Trump's speech received coverage in local newspapers and on television.

For example, the death of Jamiel Shaw Jr., who was shot and killed in 2008 in Los Angeles, was widely covered by the Los Angeles Times and local television stations. — Ron Nixon

NOT FOR LONG: Trump has signed executive orders intended to clear the way for the construction of the Keystone and Dakota Access pipelines. This will create jobs, although most of the jobs will be temporary.

"Ninety-four million Americans are out of the labor force"

MISLEADING: That is roughly the number of Americans above the age of 15 who do not have jobs.

But it includes high school and college students, people with disabilities, stay-at-home parents and millions of retirees. The number of Americans who would like to work but can't find jobs is much smaller. The Bureau of Labor Statistics estimates that some 7.6 million people are "unemployed." — Binyamin Appelbaum

NOT QUITE: Trump signed a bill rolling back a regulation that would have prevented coal mining companies from polluting streams. But there is no evidence that the rule threatened a significant number of coal mining jobs or that rolling it back will create new ones. Most economists have concluded that the decline in coal mining jobs is due to increased mechanization and a market shift by electric utilities away from coal and toward natural gas, which is cheaper. — Coral Davenport

Former Gov. Steve Beshear of Kentucky delivered the Democratic response to Trump's speech, and we checked his assertions too:

"We can enforce our immigration laws without tearing apart families"

NOT UNLESS LAWS CHANGE: Hundreds of thousands of American citizens are born each year to parents who are in the country illegally. The Pew Research Center found that in 2012, 4.5 million American children were living with undocumented parents. Unless the current immigration laws are changed, enforcing them fully would separate those families. — Caitlin Dickerson

TRUE SO FAR: A number of Republican proposals have emerged since the Affordable Care Act was passed in 2010, but few of them have been evaluated by the Congressional Budget Office, the official government scorekeeper for legislative proposals. But several of the leading plans have been evaluated by independent experts. And, indeed, they have all led to reductions in insurance coverage when compared with current numbers. — Margot Sanger-Katz

Trump has attacked intelligence agencies, the courts, the military, the news media and individual Americans

FEW HAVE BEEN SPARED: Trump has tweeted criticism of the FBI; the court and judge who ruled against his travel ban; major news outlets; individual lawmakers; and celebrities. He did refer to the military as a "disaster" during the election but has since focused on what he views as a depletion of its resources and a lack of funding. — Linda Qiu