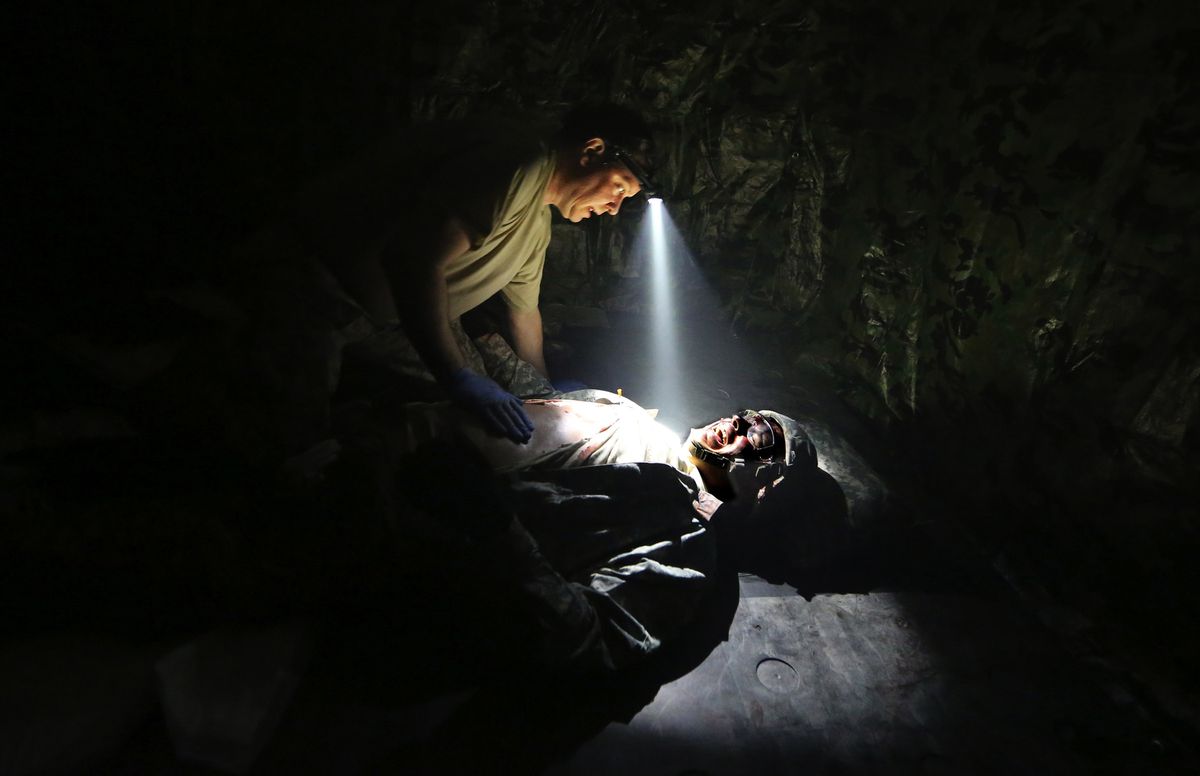 SEATTLE — The "soldier" lying in a dark corner of a University of Washington lab screams and writhes after being wounded by a roadside bomb. His right leg is blown off below the knee. Shrapnel has punctured his femoral artery and chest.

"You're not going to die," said Troy Reihsen, tying a tourniquet around the hemorrhaging leg. Working with just the light of his headlamp, Reihsen moves on to plug the femoral artery and chest wounds. He jams a needle into the soldier's chest to help him breathe.

Reihsen, a former combat medic, now works with Sweet. Jordan Gonzalez, another former medic, was acting as the wounded soldier. Using something like a magician's trick, Gonzalez's body hid below the platform his head and arms rested on.

The bloody and battered body parts were actually a mannequin called Frank. Reihsen was demonstrating the early version of a research project funded by the U.S. Department of Defense that aims to create next-generation, "Terminator"-like technology for training battlefield medics.

Sweet and UW researchers are creating mannequin skin that's warm to the touch, tongues moist with fake saliva, arms that reveal layers of fat when cut open, animatronic legs and more. By 2019 they expect to have a lifelike mannequin that looks and bleeds like a real soldier. And their technology may help the military move away from training its medics on live animals, a controversial practice that's involved wounding and killing pigs and goats.

"The practice itself is very much alive. That's not to say we haven't made progress," said Shalin Gala of People for the Ethical Treatment of Animals (PETA).

Named for Frankenstein, the Frank mannequin was built by Sweet and his team from parts created by three companies specializing in different areas — neck, torso, limbs — of medical mannequin training.

The hope is to construct a mannequin with software that can mimic blocked airways and other injuries. Students could then see a digitized version of the mannequin on a computer screen, with its vital signs, and how they respond to a particular treatment, giving quick feedback on whether the students are properly performing procedures such as inserting a tracheal tube.

Sweet's team is now working on an open platform that would let any manufacturer or software developer contribute. One might focus on arms that appear to have first-degree burns, while another might specialize in internal organs.

Sweet likened the evolution to video games. "We're still stuck in going to the arcade where you had to use a different machine to play a different game," he said. "The platform creates something like Xbox where any company can create a module with which you can communicate."

Reihsen believes we can make combat-injury simulators that will be better than live animals for teaching some skills. Whether they're better than live tissue for all injuries remains to be seen, he said. "A simulation doesn't bleed like we bleed," he said.

In responding to a letter about a 2014 study, one of its authors, Air Force Maj. Andrew Hall, wrote: "We have entered into an age where artificial simulator models are at least equivalent to, if not superior to, animal models."

A PETA survey of NATO allies found that nearly 80 percent of the countries do not use animals for military training, Gala said. But the U.S. military still uses more than 8,500 live animals each year, according to a bill filed in Congress that would prohibit that practice.

Simulators are used in other high-stakes professions, Sweet said. "The biggest difference in models is that it's a lot easier to build a submarine or aircraft simulation than a human-body simulation."

Sweet's team hopes the next-generation simulator, funded with an $8 million grant from the Department of Defense, will even shout and shriek like Gonzalez. That "cognitive distraction," as Reihsen called it, is important in preparing medics for combat conditions.