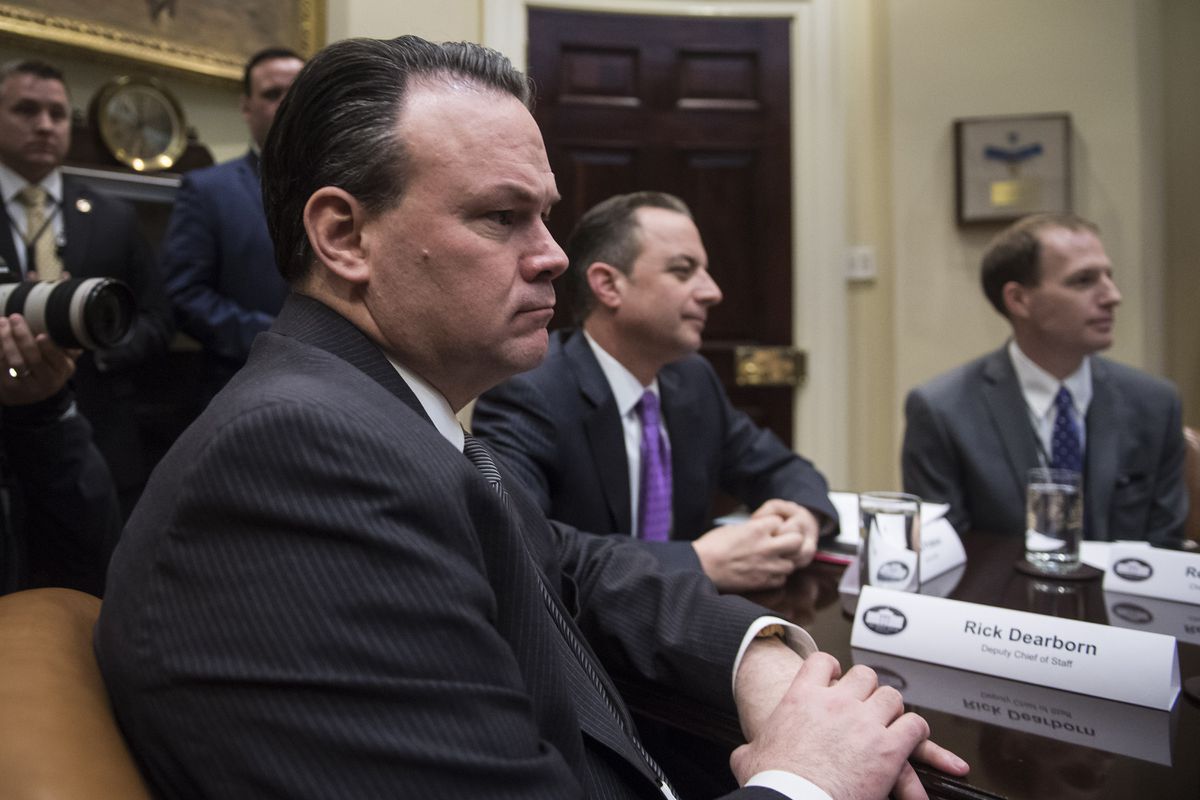 A shadow government of political appointees with the title of senior White House adviser is embedded at every Cabinet agency. The network reports to Rick Dearborn, left, the White House deputy chief of staff for policy, according to administration officials. At center is Chief of Staff Reince Priebus. (Washington Post photo by Jabin Botsford)

A shadow government of political appointees with the title of senior White House adviser is embedded at every Cabinet agency. The network reports to Rick Dearborn, left, the White House deputy chief of staff for policy, according to administration officials. At center is Chief of Staff Reince Priebus. (Washington Post photo by Jabin Botsford)

WASHINGTON – The political appointee charged with keeping watch over Environmental Protection Agency Administrator Scott Pruitt and his aides has offered unsolicited advice so often that after just four weeks on the job, Pruitt has shut him out of many staff meetings, according to two senior administration officials.

At the Pentagon, they're privately calling the former Marine officer and fighter pilot who's supposed to keep his eye on Defense Secretary Jim Mattis "the commissar," according to a high-ranking defense official with knowledge of the situation. It's a reference to Soviet-era Communist Party officials who were assigned to military units to ensure their commanders remained loyal.

Most members of President Donald Trump's Cabinet do not yet have leadership teams in place or even nominees for top deputies. But they do have an influential coterie of senior aides installed by the White House who are charged – above all – with monitoring the secretaries' loyalty, according to eight officials in and outside the administration.

This shadow government of political appointees with the title of senior White House adviser is embedded at every Cabinet agency, with offices in or just outside the secretary's suite. The White House has installed at least 16 of the advisers at departments including Energy and Health and Human Services and at some smaller agencies such as NASA, according to records first obtained by ProPublica through a Freedom of Information Act request.

These aides report not to the secretary, but to Rick Dearborn, the White House deputy chief of staff for policy, according to administration officials. A top Dearborn aide, John Mashburn, leads a weekly conference call with the advisers, who are in constant contact with the White House.

The aides act as a go-between on policy matters for the agencies and the White House. Behind the scenes, though, they're on another mission: to monitor Cabinet leaders and their top staffs to make sure they carry out the president's agenda and don't stray too far from the White House's talking points, said several officials with knowledge of the arrangement.

"Especially when you're starting a government and you have a changeover of parties when policies are going to be dramatically different, I think it's something that's smart," said Barry Bennett, a former Trump campaign adviser. "Somebody needs to be there as the White House's man on the scene. Because there's no senior staff yet, they're functioning as the White House's voice and ears in these departments."

The arrangement is unusual. It wasn't used by Presidents Barack Obama, George W. Bush or Bill Clinton. And it's also different from the traditional liaisons who shepherd the White House's political appointees to the various agencies.Critics say the competing chains of command eventually will breed mistrust, chaos and inefficiency – especially as new department heads build their staffs.

"It's healthy when there is some daylight between the president's Cabinet and the White House, with room for some disagreement," said Kevin Knobloch, who was chief of staff under Obama to then-Energy Secretary Ernest Moniz.

"That can only happen when agency secretaries have their own team, who report directly to them," he said. "Otherwise it comes off as not a ringing vote of confidence in the Cabinet."

The White House declined to comment about the appointees on the record, citing the confidentiality of personnel matters and internal operations. But a White House official, speaking on the condition of anonymity, contested their mission of holding agencies accountable and said they technically report to each department's chief of staff or to the secretaries themselves.

"The advisers were a main point of contact in the early transition process as the agencies were being set up," the official said in an email. "Like every White House, this one is in frequent contact with agencies and departments."

The advisers' power may be heightened by the lack of complete leadership teams at many departments.

"He and Brian Klippenstein are just a handful of appointees on the ground and they're doing a big part of the day-to-day work" said Dale Moore, the American Farm Bureau Federation's public policy executive director.

Every president tries to assert authority over the executive branch, with varying degrees of success.

The Obama White House kept tight control over agencies, telling senior officials what they could publicly disclose about their own department's operations. Foreign policy became so centralized that State Department and Defense Department officials complained privately that they felt micromanaged on key decisions.

After then-Attorney General Eric Holder made some political gaffes, Obama aides wanted to install a political aide at the Justice Department to monitor him. But Holder was furious about the intrusion and blocked the plan. Former Defense Secretary Robert Gates pushed back against a top official the White House wanted at the Pentagon to guide Asia policy, wary of someone so close to the president in his orbit.

Former House Speaker Newt Gingrich, R-Ga., a Trump adviser, said the president needs to dispatch political allies to the agencies to monitor a bureaucracy that's being targeted for reduction.

"If you drain the swamp, you better have someone who watches over the alligators," Gingrich said."These people are actively trying to undermine the new government.And they think it's their moral obligation to do so."

At the Transportation Department, former Pennsylvania lobbyist Anthony Pugliese shuttles back and forth between the White House and DOT headquarters on New Jersey Avenue, according to an agency official. His office is just 20 paces from Secretary Elaine Chao, the official said.

Day to day, Pugliese and his counterparts inform Cabinet officials of priorities the White House wants them to keep on their radar. They oversee the arrival of new political appointees and coordinate with the West Wing on the agency's direction.

The arrangement is collegial in some offices, including at Transportation and Interior, where aides to Chao and Secretary Ryan Zinke insisted that the White House advisers work as part of the team, attending meetings, helping form an infrastructure task force and designing policy on public lands.

Tensions between the White House and the Cabinet already have spilled into public view. Mattis, the defense secretary, and Homeland Security Secretary John Kelly were caught unaware in January by the scope of the administration's travel ban in January. The president has been furious about leaks on national security matters.

Trump does not have long-standing relationships or close personal ties with most leaders in his Cabinet. That's why gauging their loyalty is so important, said officials who described the structure.

"A lot of these [Cabinet heads] have come from roles where they're the executive," said a senior administration official not authorized to publicly discuss the White House advisers. "But when you become head of an agency, you're no longer your own person. It's a hard change for a lot of these people: They're not completely autonomous anymore."

Many of the senior advisers lack expertise in their agency's mission and came from the business or political world. They include Trump campaign aides, former Republican National Committee staffers, conservative activists, lobbyists and entrepreneurs.

At Homeland Security, for example, is Frank Wuco, a former security consultant whose blog Red Wire describes the terrorist threat as rooted in Islam. To explain the threat, he appears on YouTube as a fictional jihadist.

Matt Mowers, a former aide to New Jersey Gov. Christie, R, who was Trump's national field coordinator before landing at the State Department as senior adviser, said through a spokesman that he "leads interagency coordination" among the White House, agencies and the National Security Council and "coordinates on policy and personnel."

Mowers sits at the edge of Secretary of State Rex Tillerson's seventh-floor suite, dubbed Mahogany Row. But neither Tillerson nor his chief of staff are his direct boss.

Many of the advisers arrived from the White House with the small groups known as "beachhead teams" that started work on Jan. 20. One of the mandates at the top of their to-do list now, Bennett said, is making sure the agencies are identifying regulations the administration wants to roll back and vetting any new ones.

At the Pentagon, Brett Byers acts as a go-between between Mattis' team and the White House, largely on "bureaucratic" matters, said an official who spoke on the condition of anonymity to discuss personnel issues.

Career officials who work near the "E" ring offices occupied by senior Pentagon staff, suspicious that Byers is not directly on Mattis' team, came up with the Soviet-era moniker "commissar"to describe him, someone familiar with their thinking said.

Elsewhere, resentment has built up. Pruitt is bristling at the presence of former Washington state Sen. Don Benton, who ran the president's Washington state campaign and is now the EPA's senior White House adviser, said two senior administration officials who spoke on the condition of anonymity to discuss personnel matters.

These officials said Benton piped up so frequently during policy discussions that he had been disinvited from many of them. One of the officials described the situation as akin to an episode of the HBO comedy series "Veep."

Trump's approach may not be so different than Abraham Lincoln's. Coming into the White House after more than a half-century of Democrats in power, Lincoln worked swiftly to oust hostile bureaucrats and appoint allies. But he still had to deal with an Army led by many senior officers who sympathized with the South, as well as a government beset by internal divisions.

Gettysburg College professor Allen Guelzo described Lincoln as "surrounded by smiling enemies," which prompted him to embed his friends into army camps as well as some federal departments.

"I think that presidents actually do this more than it appears," said Guelzo, adding that Lincoln dispatched Quartermaster General of the U.S. Army Montgomery Meigs to circulate among the Army of the Potomac to pick up any negative "doggerel" or insults officers made about him.