As North Korea rushes for better bombs, US fears time will run out 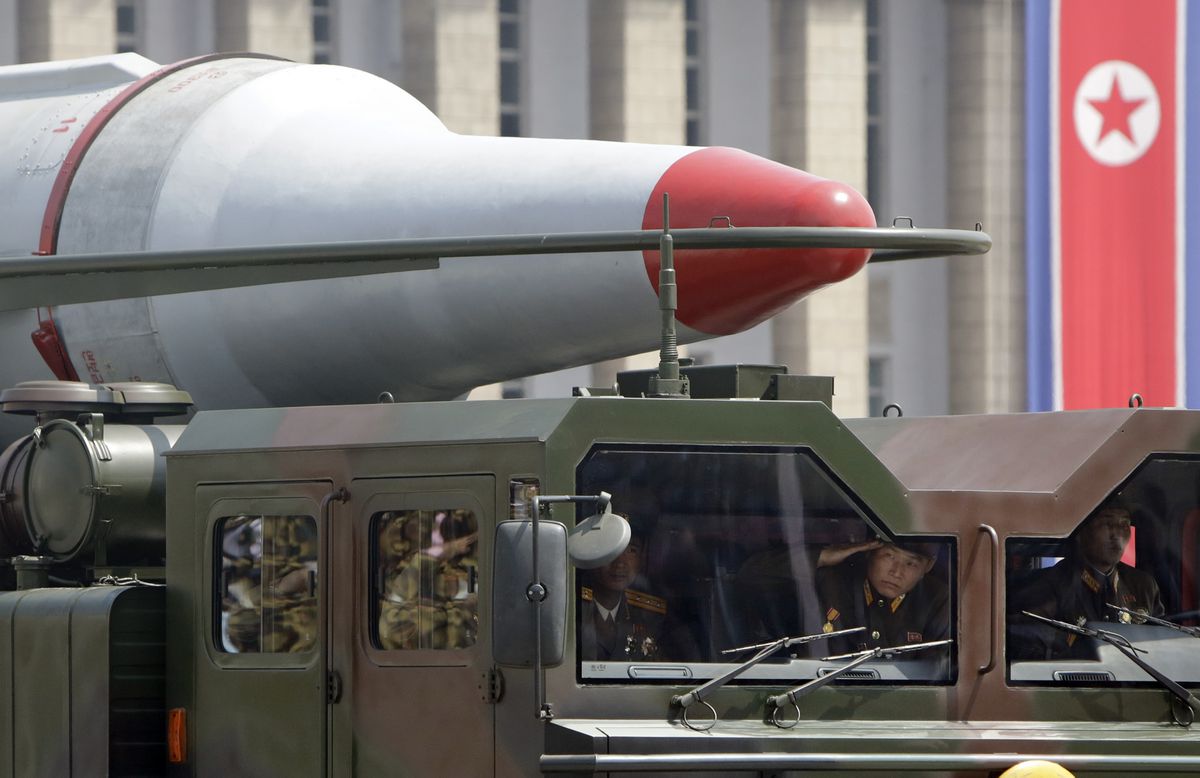 WASHINGTON — Behind the Trump administration's sudden urgency in dealing with the North Korean nuclear crisis lies a stark calculus: a growing body of expert studies and classified intelligence reports that conclude the country is capable of producing a nuclear bomb every six or seven weeks.

That acceleration in pace — impossible to verify until experts get beyond the limited access to North Korean facilities that ended years ago — explains why President Donald Trump and his aides fear they are running out of time. For years, American presidents decided that each incremental improvement in the North's program — another nuclear test, a new variant of a missile — was worrisome, but not worth a confrontation that could spill into open conflict.

[Could North Korea actually hit Alaska with a missile?]

Now those step-by-step advances have resulted in North Korean warheads that in a few years could reach Seattle. "They've learned a lot," said Siegfried S. Hecker, a Stanford professor who directed the Los Alamos weapons laboratory in New Mexico, birthplace of the atomic bomb, from 1986 to 1997, and whom the North Koreans have let into their facilities seven times.

North Korea is threatening another nuclear test, which would be its sixth in 11 years. The last three tests — the most recent was in September — generated Hiroshima-size explosions. It is unclear how Trump would react to a test, but he told representatives of the U.N. Security Council at the White House on Monday that they should be prepared to pass far more restrictive sanctions, which U.S. officials say should include cutting off energy supplies.

"People have put blindfolds on for decades, and now it's time to solve the problem," Trump said.

He made his remarks after a Sunday night phone call on North Korea with Xi Jinping, China's president, who urged Trump to show "restraint" with North Korea, according to a Chinese television report. White House officials said little about the call, and aides are trying to use Trump's unpredictability to the greatest advantage, hoping it will keep the Chinese off balance and deter the North Koreans.

A Bomb for Survival

Inside the CIA, they call it "the disco ball."

It is a round, metallic sphere, covered by small circles, that the North Korean leader, Kim Jong Un, is shown caressing in official photographs as if it were his crown jewel. And it may be: The sphere is supposedly a nuclear weapon, shrunken to fit inside the nose cone of one of the country's growing arsenal of missiles.

U.S. intelligence officials still debate whether it is a real bomb or a mock-up that is part of the country's vast propaganda effort. But it is intended to show where the country is headed.

Unless something changes, North Korea's arsenal may well hit 50 weapons by the end of Trump's term, about half the size of Pakistan's. U.S. officials say the North knows how to shrink those weapons so they can fit atop one of its short- to medium-range missiles — putting South Korea and Japan, and the thousands of U.S. troops deployed in those two nations, within range. The best estimates are that North Korea has roughly 1,000 ballistic missiles in eight or so varieties.

But fulfilling Kim's dream — putting a nuclear weapon atop an intercontinental ballistic missile that can reach Seattle or Los Angeles, or one day New York — remains a more complex problem.

As Hecker, a man who has built his share of nuclear weapons, noted last week, any weapon that could travel that far would have to be "smaller, lighter and surmount the additional difficulties of the stresses and temperatures" of a fiery re-entry into the atmosphere.

But the North has come further than most experts expected since the infancy of its program in the 1950s, when the Soviet Union began training North Korean scientists in nuclear basics.

It took three decades for the North to assemble the technology it needed to make its own bomb fuel. Finally, from a reactor at Yongbyon, it succeeded in making plutonium: enough for about one atomic bomb a year.

The first North Korean nuclear crisis, in 1994, ended in an agreement with the Clinton administration to freeze the North's production facilities in return for oil and peaceful reactors. It fell apart early in the George W. Bush administration. In 2006, the first test explosion, while unimpressive, entered North Korea into the club of nuclear powers. Analysts say the first blast was a plutonium bomb, as was a second detonation just months into the Obama administration in 2009.

Hecker visited Yongbyon in 2010, and the North Koreans showed him a complete uranium enrichment facility, which U.S. intelligence agencies had missed. The message was clear: The North now had two pathways to a bomb, uranium and plutonium. Today, it has an arsenal made up of both, intelligence officials believe.

And it is aiming for something much bigger: a hydrogen bomb, with a destructive force up to 1,000 times greater than ordinary nuclear weapons. That is exactly the path the United States took in the 1950s.

Recently, U.N. investigators found evidence that the North's factories had succeeded in producing lithium 6, a rare ingredient needed to make thermonuclear fuel. Gregory S. Jones, a scientist at RAND Corp., said the North might have used bits of thermonuclear fuel in its 2016 detonations.

A potential clue, analysts say, is that the North's five blasts during the past decade have grown steadily more destructive.

The Hard Part: Shrinking the Bomb

A bomb is useless to North Korea — as an offensive weapon or as a deterrent — unless the country can make a convincing case that it has a reliable delivery system. So when the North flaunts missiles at military parades, as it did on April 15, the stars of the show tend to be the big missiles that are designed to reach Washington and New York. While several intercontinental ballistic missiles rolled down the streets of Pyongyang, conducting a flight test that proves one could fly that far, and land with accuracy, is so far only an aspiration.

Missing from the parade were the short- and medium-range missiles that have been successfully flight tested. U.S. intelligence agencies believe some of those can carry operational nuclear arms. The critical one is the Nodong, which has a range of about 800 miles.

But the North Koreans are discovering — as the United States, the Soviet Union and China did before them — that it is far more complicated to design an intercontinental missile. With that weapons system, a warhead would move at 4 miles a second and re-enter the atmosphere in fiery heat — so, if badly engineered, it would burn up long before hitting a target. To reach their goal, North Korean weapons designers are looking to miniaturize their warheads, making them far lighter and more powerful.

The big effort these days is to merge two technologies: Get a missile that can cross the Pacific, and marry it to a warhead that can survive the ride. And this is why the United States is so desperate to stop the cycle of testing.

The cyber- and electronic warfare attacks that President Barack Obama ordered against the country's missile fleet were intended to slow North Korea's learning curve. The Musudan, which can travel 2,200 miles, has racked up an embarrassing failure rate of 88 percent — although how much of that is due to incompetence or outside meddling is not known. Until the North Koreans figure out what is going wrong, and how to fix it, they appear hesitant to test the KN-14 and the KN-08, both of which are designed to hit the continental United States.

The diplomatic pressure from China to stop a sixth nuclear test at the Punggye-ri test site is intended to keep the North Koreans from making advances in warhead miniaturization and the design of a hydrogen bomb. As Obama noted before he left office, even failures are important learning tools for the North Koreans, aiding the trial-and-error process of making new warheads.

How long will it take for the North Koreans to solve those problems? The best guesswork is around 2020 — while Trump is still in his first term.

A Freeze, but to What End?

The strategy emerging from Trump's national security team comes down to this: Apply overwhelming pressure on the North, both military and economic, to freeze its testing and reduce its stockpile. Then use that opening to negotiate, with the ultimate goal of getting the North Koreans to give up all their weapons.

Many experts, however, believe that is a fantasy, because Kim regards even a small arsenal as critical to his survival. The upside of the strategy, if it works, is that the "nuclear freeze" would delay for years the day the North can fit a small, reliable, well-tested weapon atop a large, reliable, well-tested missile. The downside is that it would leave the North Koreans with a small, potent arsenal — one the United States would be essentially acknowledging, if not accepting.

That is why it will be hard for Trump to fulfill his vow to "solve this problem." And every day, there is the chance of miscalculation, or an accident.

At any moment, Hecker said on a call to reporters organized by the Union of Concerned Scientists, a live weapon could turn into an accidental nuclear detonation or some other catastrophe.

"I happen to believe," he said, "the crisis is here now."