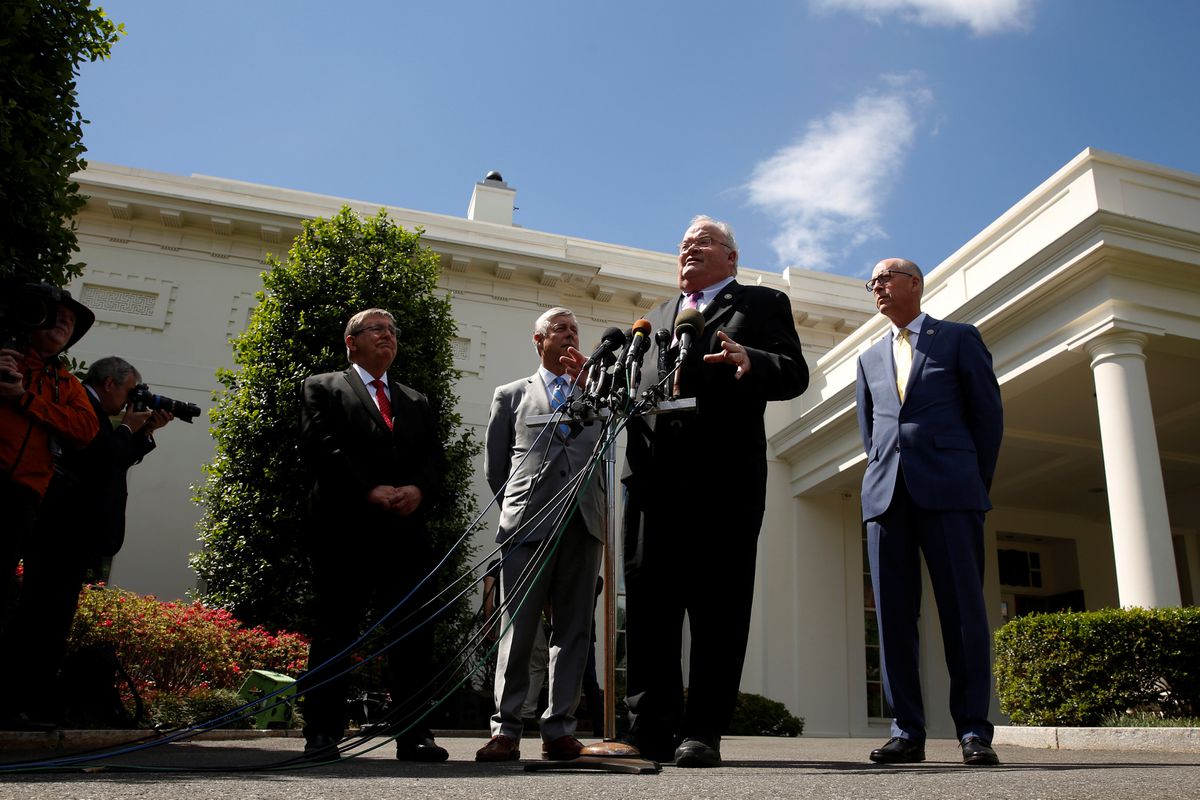 WASHINGTON – House Republican leaders said Wednesday that they plan to bring their controversial plan to revise key parts of the Affordable Care Act to a vote on Thursday, capping weeks of fits and starts in their attempt to fulfill a signature campaign promise.

The flagging Republican effort to reshape the nation's health-care system picked up steam Wednesday as GOP leaders tried to address concerns about people with pre-existing medical conditions. But independent analysts remained skeptical that the new proposal would fully address the needs of at-risk patients who receive coverage guarantees under the Affordable Care Act, underscoring the contentious nature of the Republican effort.

Republican leaders huddled in the office of House Speaker Paul Ryan, R-Wis., on Wednesday evening to figure out the next steps after a whirlwind day at both ends of Pennsylvania Avenue. Several said they would hold a vote this week only if they felt certain it could pass – meaning they now think they have the votes.

Exiting the relatively brief leadership meeting, House Majority Leader Kevin McCarthy, R-Calif., guaranteed victory. "Do we have the votes? Yes. Will we pass it? Yes," he told reporters.

Several Republicans said a vote is expected by lunchtime on Thursday. The House Rules Committee met late Wednesday to take procedural steps in advance of the floor vote.

If the bill passes, it will face a steep climb in the Senate, where widespread disagreement remains among Republicans about how to proceed on health care.

Rep. Fred Upton, an influential Republican from Michigan, introduced the amendment that was key to resolving a major sticking point this week. It provides more financial assistance – $8 billion over five years – to help people with pre-existing conditions pay for medical costs. Those people are at risk of losing protections under the GOP plan, which seeks to repeal and replace major parts of the ACA.

Just a day earlier, Upton said he could not support the Republican plan because of its stance on pre-existing conditions. But he sounded an optimistic note after sketching out his fix Wednesday and meeting with President Donald Trump at the White House.

Upton said Trump called him Tuesday afternoon. The two had a "good give and take," he said, and Trump grew "a little angry" when Upton said he could not support the bill. But eventually, he said, they came to an agreement on his amendment.

Rep. Billy Long, R-Mo., who like Upton was against the bill earlier this week over the issue of coverage for pre-existing conditions, was also in the White House meeting.

A Washington Post analysis showed 20 House Republicans either opposed to or leaning against the bill late Wednesday, and 36 more either undecided or unclear in their positions. If no Democrats support the measure, House Republicans can lose no more than 22 GOP votes to pass their bill.

Upton's amendment was not met with resistance by the House Freedom Caucus, a key bloc of conservatives whose opposition to an earlier version of the health-care bill led GOP leaders to yank the measure.

"I don't see any defections because of this particular amendment from our previous whip count," said Rep. Mark Meadows, R-N.C., the chairman of the group. Meadows and Upton both said they had been in touch.

Documents filed with the House Rules Committee showed the Upton amendment was co-sponsored by Long and four other Republicans who had been previously undecided, suggesting that the quartet would support Ryan's bill on final passage.

Under the GOP plan, states could opt out of parts of the ACA, meaning people with pre-existing conditions could be denied coverage or charged more. Such states would have to set up "high-risk pools" to absorb some of the costs.

Upton's amendment would help some patients with expensive conditions, such as cancer or diabetes, pay premiums and out-of-pocket costs.

Some experts doubted that $8 billion was enough to aggressively address those costs over a five-year period. According to an analysis from the Kaiser Family Foundation, the temporary high-risk pool created by the ACA covered just 100,000 people; the government paid out $2 billion in subsidies to that pool in one year.

Far more people with pre-existing conditions are likely to lose health coverage under the GOP health-care plan – some estimate about 5 million individuals. Depending on how many states apply for the funds, $1.6 billion a year could be spread thin.

"For subsidies to cover 68 percent of enrollees' premium costs, as ACA tax credits do now in the individual market exchanges, the government would have to put up $32.7 billion annually," Emily Gee, a health economist at the progressive Center for American Progress, wrote in an analysis of the plan. "Even after applying that subsidy, high-cost consumers would still owe $10,000 annually toward premiums."

After meeting with Trump, Upton said his amendment would "more than cover those who might be impacted."

There was also uncertainty about how the bill would be scored by the nonpartisan Congressional Budget Office, which measures how much the legislation will cost and how many people stand to lose coverage.

Republican leaders were willing to move ahead with a vote even before obtaining an updated score. Speaking on the House floor Wednesday afternoon, McCarthy brushed off a Democrat's concerns about a new score, noting that a previous version of the bill had already been reviewed by the CBO.

The CBO projected in late March that a revised GOP health-care plan would result in 14 million more people being uninsured in 2018 than under current law. It projected the plan would slash the federal deficit by $150 billion between 2017 and 2026.

The House is slated to go on recess Thursday until May 16, which forced GOP leaders to make a quick decision about whether to try to hold a vote before leaving town.

The White House has been putting heavy pressure on Ryan to swiftly pass a health-care bill, amid fears that Republicans will lose their opportunity if the effort continues to drag out.

Democrats, who have held firm against the GOP's revision push, said they were not impressed by the newly proposed changes.

"Trumpcare means heart-stopping premium increases for people with preexisting conditions, and no Band-Aid amendment will fix it," said House Minority Leader Nancy Pelosi, D-Calif., who like many in her party has sought to associate the bill closely with Trump.

At the House Rules Committee meeting Wednesday night, Democrats expressed displeasure with both the substance of the Republican bill and the process by which it was brought up.

"We've been forced to rely on press reports to figure out what the hell's even in this bill," snapped Rep. Jim McGovern, D-Mass.

The Upton change is the latest fix Republicans have added to their measure as they've tried to keep it viable. Last month, they added $15 billion for a program to reimburse insurers who cover patients with preexisting conditions – an effort to appease conservatives worried about lowering premiums.

It remained unclear whether all states would be able to apply for the newly proposed funding, or just states where patients with preexisting conditions could be charged higher premiums. Under a separate proposed amendment to the bill from Rep. Tom MacArthur, R-N.J., which convinced many conservatives to sign on to the bill, states could apply for a federal waiver from a ban on insurers charging those patients more.

Several prominent health-care and advocacy organizations voiced their unequivocal opposition to the legislation.

Andrew Gurman, president of the American Medical Association, warned in a statement that "none of the latest legislative tweaks under consideration changes the serious harm to patients and the health care delivery system" should the bill pass. Millions would still lose coverage or have to pay far higher insurance costs "as a direct result," Gurman said.

And in a letter to lawmakers, AARP said the changes to be voted on Thursday "would make a bad bill even worse," increasing out-of-pocket costs for Americans ages 50-64 and weakening the fiscal stability of Medicare, which covers people 65 and older.

Rep. Carlos Curbelo, R-Fla., a moderate seen as a top Democratic target in 2018, was pressed several times by party whips and told reporters that he could be convinced to move from no to yes.

"The easiest thing to do in this town is to say no," he said. "That's usually the politically expedient thing to do. If I believe this legislation can be improved by the time it comes back to the House, I will be supporting it."

"If House Leadership will work to tighten protections for those with preexisting conditions, I'm a yes on sending this bill to the Senate for further consideration," he said Wednesday. "If not, I'm a no, and we'll go back to the drawing board."