For Trump's supporters, the real outrage is the uproar over Comey 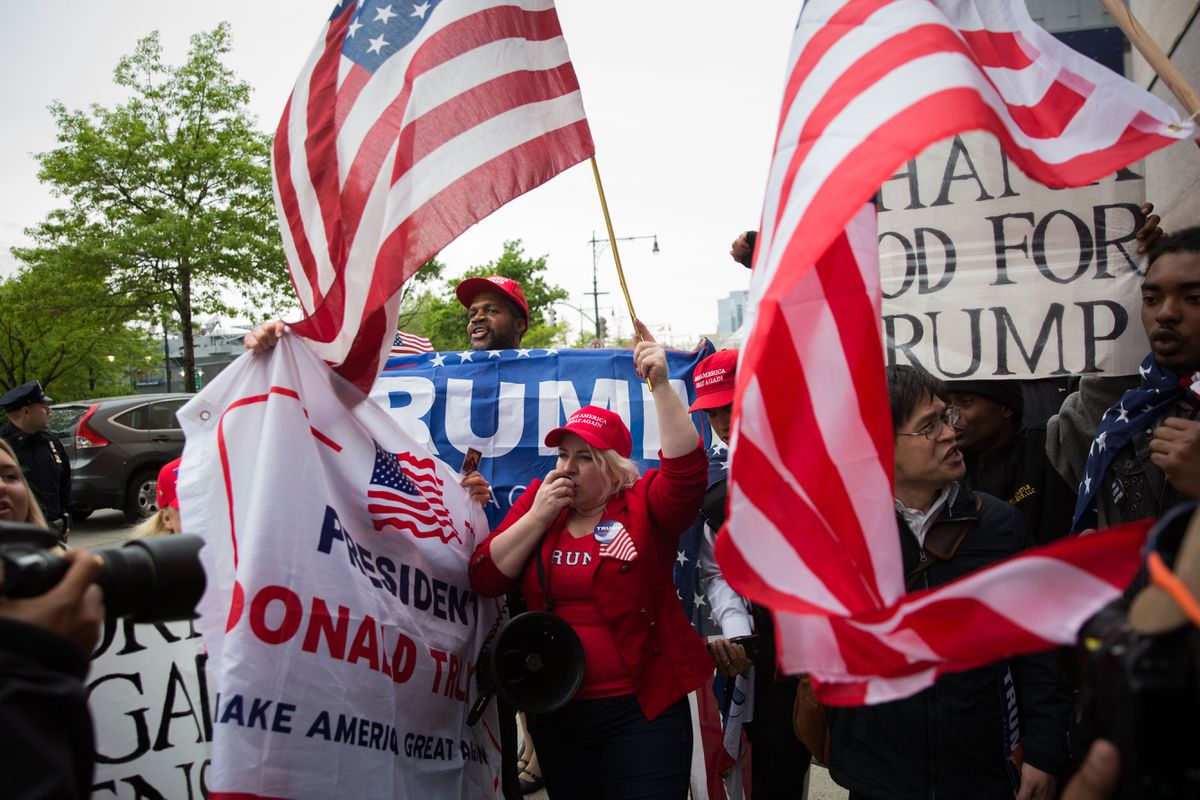 WASHINGTON — The script should be familiar by now. President Donald Trump takes action that stuns the country, eliciting indignation and disbelief from Democrats and leading them to conclude that the vitality of American democracy is under assault.

Yet among those who are sympathetic to the president — somewhere around 40 percent of the country, according to recent polls — the outrage is that Trump is again being held to an unfair standard set by the very people and institutions that tried to stop his election in the first place: Democrats, resentful Republicans and, perhaps most of all, the news media.

That has certainly been the divide as the country absorbed the news that Trump had fired James B. Comey as FBI director. The move was widely hailed by conservatives online, on talk radio, on Fox News and among the president's allies in Washington: the universe in which views of Trump quickly harden in the right's collective consciousness.

More clearly than other recent Trump-induced uproars, the reaction to the Comey firing illustrated how many conservatives now justify their defense of the president as part of a fight against a rising tide of overreaction and manufactured hysteria by the left. Trump, who has long understood the political power of demonizing his opponents as crazed and irrational, has helped stoke those resentments.

"In a word, they see him as their voice," said Frank Luntz, the Republican consultant and pollster. "And when their voice is shouted down, disrespected or simply ignored, that is an attack on them, not just an attack on Trump."

Many conservatives see not just a reactionary left, but menacing forces in the form of an anti-Trump movement that uses hype as a pretense to undermine their political power. Such a visceral reaction from the right, analysts said, is something unique to Trump's appeal. And the more conservatives perceive the president as under siege from his political enemies — enemies they also see as their own — the more willing they seem to accept his version of events.

In this version of events, the "alternate facts" emanate not from the mouths of Trump or his aides but from the "fake news" mainstream media.

The way the Comey story played out in the conservative news media was a telling illustration of this divide.

The Conservative Review, an online journal, mocked "the same fretting screeds that have accompanied nearly every move and measure conducted by this administration, regardless of severity." With each one, the website said, the president's opponents were "whipping themselves up into full Constitutional Crisis mode."

On Facebook, Republicans shared the 1993 C-SPAN footage of Bill Clinton's announcement that he had fired William S. Sessions, the only other FBI director to be dismissed, while the bureau was investigating why employees in the White House Travel Office had been involved in an episode that became known as Travelgate. (The conditions of Sessions' firing were much different, however, as he had abused his federally funded travel privileges.)

Even conservatives who have repeatedly criticized Trump leapt to his defense. Erick Erickson, the writer and radio host who has called for an independent investigation into Russian ties to the Trump campaign, also called the cries of constitutional crisis "hysterics."

"The left will never believe President Trump nor believe anything other than the worst possible conspiracies about him," he wrote.

"Russiaism is the new Birtherism," he added, an ironic comparison given that Trump was a primary promoter of the false claim that President Barack Obama was born in Kenya.

National Review, which has repeatedly sided against Trump, nevertheless backed his decision to fire Comey. "The Bureau's reputation is at a low ebb because of Comey's decisions," the magazine said in an editorial. "One way or the other, he needed to go."

Ever since he began his presidential campaign, Trump has portrayed his political opponents as unhinged, radical and sometimes as paid professionals of the left. And while that may have been true in some instances, Trump often makes the case that these represent the bulk of the people working against him.

"They don't represent the center of gravity in the resistance movement, but he tries to suggest that they do," said Geoff Garin, a Democratic pollster.

Many conservatives, even those who are not necessarily fans of the president, are willing to see his detractors in this light. And Trump understands that better than most, Garin added. "Trump artfully uses protest movements to drive wedges between people," he said.

Much as Republicans did when they painted Al Gore supporters as sore losers after the disputed 2000 election — waving signs that read "Sore Loserman," wordplay on the Gore-Lieberman ticket — the party is again creating a sense among its supporters that the left is bitter about its loss and resorting to histrionics as a result.

When Sen. Charles E. Grassley, R-Iowa, was asked on Fox News about comparisons that liberals and others have made between the firing of Comey and the "Saturday Night Massacre" — the ouster of Justice Department officials who refused to carry out President Richard M. Nixon's order to fire the special prosecutor leading the Watergate investigation — he snapped, "Suck it up and move on."

Democrats should recognize that reaction. For years, they accused Republicans of resisting Obama's agenda at every turn, of being spiteful and even hateful as they refused to accept the results of the presidential election. And now, Republicans seem to relish the opportunity to turn the tables.

Rush Limbaugh told his listeners Wednesday, "This kind of irrational hate — this all-consuming hate and derangement, delusion — it isn't healthy."