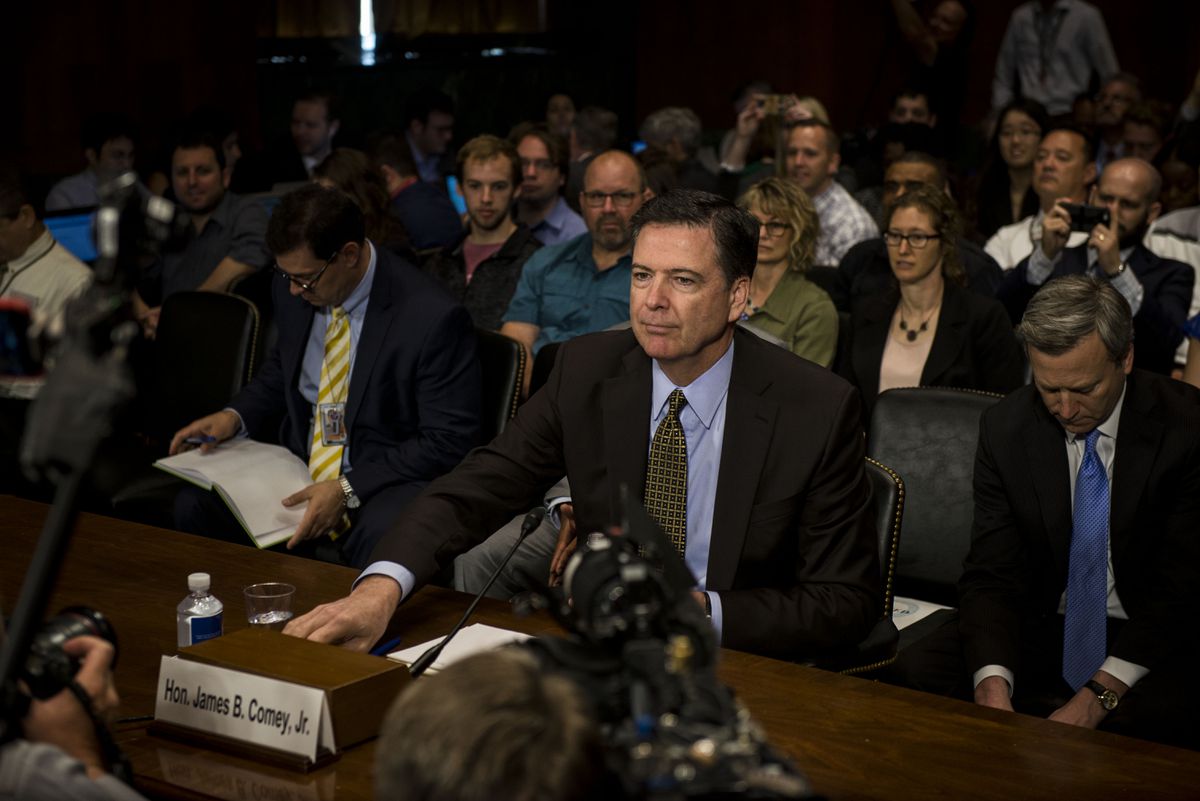 FILE — FBI Director James Comey testifies before the Senate Judiciary Committee, less than a week before he was fired, on Capitol Hill in Washington, May 3, 2017. (Gabriella Demczuk/The New York Times)

FILE — FBI Director James Comey testifies before the Senate Judiciary Committee, less than a week before he was fired, on Capitol Hill in Washington, May 3, 2017. (Gabriella Demczuk/The New York Times)

President Donald Trump asked the FBI director, James B. Comey, to shut down the federal investigation into Trump's former national security adviser, Michael T. Flynn, in an Oval Office meeting in February, according to a memo that Comey wrote shortly after the meeting.

"I hope you can let this go," the president told Comey, according to the memo.

The documentation of Trump's request is the clearest evidence that the president has tried to directly influence the Justice Department and FBI investigation into links between Trump's associates and Russia. Late Tuesday, Rep. Jason Chaffetz, the Republican chairman of the House Oversight Committee, demanded that the FBI turn over all "memoranda, notes, summaries, and recordings" of discussions between Trump and Comey.

Such documents, Chaffetz wrote, would "raise questions as to whether the president attempted to influence or impede" the FBI.

Comey wrote the memo detailing his conversation with the president immediately after the meeting, which took place the day after Flynn resigned, according to two people who read the memo. The memo was part of a paper trail Comey created documenting what he perceived as the president's improper efforts to influence an ongoing investigation. An FBI agent's contemporaneous notes are widely held up in court as credible evidence of conversations.

Comey shared the existence of the memo with senior FBI officials and close associates. The New York Times has not viewed a copy of the memo, which is unclassified, but one of Comey's associates read parts of the memo to a Times reporter.

Trump told Comey that Flynn had done nothing wrong, according to the memo.

Comey did not say anything to Trump about curtailing the investigation, only replying: "I agree he is a good guy."

In a statement, the White House denied the version of events in the memo.

Chaffetz's letter, sent to the acting FBI director, Andrew G. McCabe, set a May 24 deadline for the internal documents to be delivered to the House committee. The Republican congressman was criticized in recent months for showing little of the appetite he demonstrated in pursuing Hillary Clinton to pursue investigations into Trump's associates.

But since announcing in April that he will not seek re-election in 2018, Chaffetz has shown more interest in the Russia investigation, and held out the potential for a subpoena on Tuesday, a notably aggressive move as most Republicans have tried to stay out of the fray.

In testimony to the Senate last week, McCabe said, "There has been no effort to impede our investigation to date."

Comey created similar memos — including some that are classified — about every phone call and meeting he had with the president, the two people said. It is unclear whether Comey told the Justice Department about the conversation or his memos.

Trump fired Comey last week. Trump administration officials have provided multiple, conflicting accounts of the reasoning behind Comey's dismissal. Trump said in a television interview that one of the reasons was because he believed "this Russia thing" was a "made-up story."

The Feb. 14 meeting took place just a day after Flynn was forced out of his job after it was revealed he had lied to Vice President Mike Pence about the nature of phone conversations he had with the Russian ambassador to the United States.

Despite the conversation between Trump and Comey, the investigation of Flynn has proceeded. In Virginia, a federal grand jury has issued subpoenas in recent weeks for records related to Flynn. Part of the Flynn investigation is centered on his financial ties to Russia and Turkey.

Comey had been in the Oval Office that day with other senior national security officials for a terrorism threat briefing. When the meeting ended, Trump told those present — including Pence and Attorney General Jeff Sessions — to leave the room except for Comey.

Alone in the Oval Office, Trump began the discussion by condemning leaks to the news media, saying that Comey should consider putting reporters in prison for publishing classified information, according to one of Comey's associates.

Trump then turned the discussion to Flynn.

Comey was known among his closest advisers to document conversations that he believed would later be called into question, according to two former confidants, who said Comey was uncomfortable at times with his relationship with Trump.

Comey's recollection has been bolstered in the past by FBI notes. In 2007, he told Congress about a now-famous showdown with senior White House officials over the Bush administration's warrantless wiretapping program. The White House disputed Comey's account, but the FBI director at the time, Robert S. Mueller III, kept notes that backed up Comey's story.

The White House has repeatedly crossed lines that other administrations have been reluctant to cross when discussing politically charged criminal investigations. Trump has disparaged the ongoing FBI investigation as a hoax and called for an investigation into his political rivals. His representatives have taken the unusual step of declaring no need for a special prosecutor to investigate the president's associates.

The Oval Office meeting occurred a little more than two weeks after Trump summoned Comey to the White House for a lengthy, one-on-one dinner in the residence. At that dinner, on Jan. 27, Trump asked Comey at least two times for a pledge of loyalty — which Comey declined, according to one of Comey's associates.

In a Twitter posting on Friday, Trump said that "James Comey better hope that there are no 'tapes' of our conversations before he starts leaking to the press!"

After the meeting, Comey's associates did not believe there was any way to corroborate Trump's statements. But Trump's suggestion last week that he was keeping tapes has made them wonder whether there are tapes that back up Comey's account.

The Jan. 27 dinner came a day after White House officials learned that Flynn had been interviewed by FBI agents about his phone calls with the Russian ambassador, Sergey I. Kislyak. On Jan. 26, Acting Attorney General Sally Q. Yates told the White House counsel about the interview, and said Flynn could be subject to blackmail by the Russians because they knew he had lied about the content of the calls.