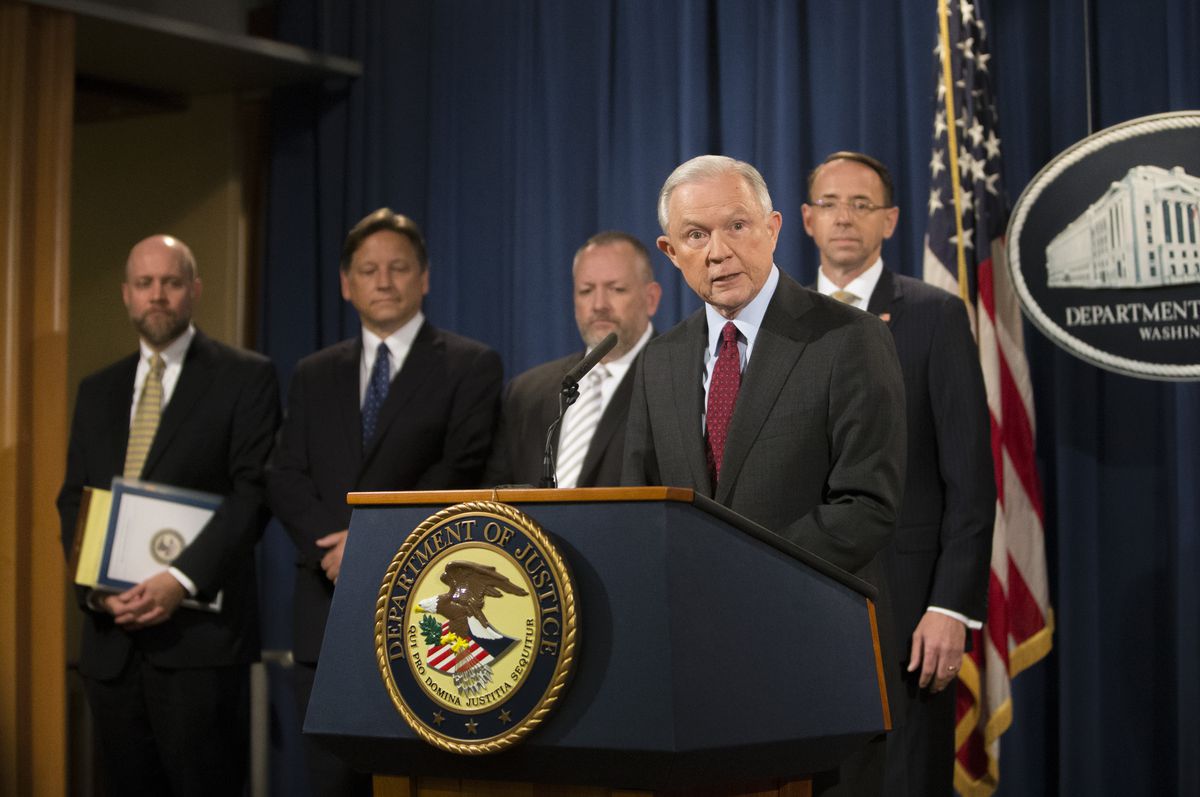 Attorney General Jeff Sessions gives a statement at the Department of Justice in Washington, July 20, 2017. Sessions deflected questions on Thursday about whether he can continue to serve in his post after President Donald Trump expressed a lack of confidence in Sessions. (Tom Brenner/The New York Times)

Attorney General Jeff Sessions gives a statement at the Department of Justice in Washington, July 20, 2017. Sessions deflected questions on Thursday about whether he can continue to serve in his post after President Donald Trump expressed a lack of confidence in Sessions. (Tom Brenner/The New York Times)

WASHINGTON — President Donald Trump's staff is used to his complaints about Attorney General Jeff Sessions, but the Republican senators who attended a White House dinner Monday were stunned to hear him criticize the man who was once Trump's most loyal supporter in the Senate.

It turned out to be a preview of even more cutting remarks Trump would make two days later in an  interview with The New York Times: an extraordinary public expression of dissatisfaction with one of his top aides based on Sessions' decision in March to recuse himself from the expanding federal investigation into whether the Trump campaign colluded with Russia.

Despite Trump's avowal in the interview that he would not have picked Sessions if he had known he would recuse himself, Sessions said Thursday that he intended to serve "as long as that is appropriate." And a spokeswoman for Trump, Sarah Huckabee Sanders, tried to moderate her boss' remarks, telling reporters later, "Clearly, he has confidence in him, or he would not be the attorney general."

But even if Sessions remains in his job, the relationship between him and Trump — the Alabama lawyer and the Queens real estate developer, an odd couple bound by a shared conviction that illegal immigration is destroying America — is unlikely to ever be the same, according to a half-dozen people close to Trump. And this is not the typical Trump administration feud.

The two men, divided by temperament, culture and geography, became surprisingly close in 2016, with Trump showing uncharacteristic deference toward Sessions, a Southern senator whose support he valued deeply.

Sessions was the president's first Cabinet appointment. As attorney general, he has taken on as broad a policy purview as any member of the Cabinet, with an ambitious law-and-order agenda — much admired by conservatives — that is focused on ending illegal immigration, attacking urban crime and restarting the Republican Party's 30-year-old devotion to a "war on drugs." Two of Sessions' aides, Stephen Miller and Rick Dearborn, worked on the Trump campaign and have key roles in the White House.

But for Trump, preoccupied by investigations he believes are unfairly aimed at him, Sessions' decision seems impossible to forgive. "Everything that is happening was triggered by Sessions' recusal," said Roger Stone, a longtime Trump political adviser whose own activities are being scrutinized by investigators.

Stone listed a chain of events Trump often ticks off against Sessions: Deputy Attorney General Rod J. Rosenstein took over the Russia investigation after Sessions' recusal, which led to the appointment of Robert S. Mueller III, a former FBI director, as special counsel, which, in turn, led to irrepressible presidential rage.

"The president initially bonded with Sessions because he saw him as a tough guy," said Stone, who has urged Sessions to investigate Obama-era officials instead of Trump campaign operatives. "Now he's saying: 'Where's my tough guy? Why doesn't he have my back?'"

"There's a lack of aggressiveness with Sessions, unless it involves chasing people for smoking pot," he added, referring to the attorney general's recent focus on marijuana offenses largely ignored under President Barack Obama.

But Sessions was there during some of Trump's lowest moments.

He was the first senator to back Trump, lending some credibility to a candidate whom many in the party viewed as either a joke or a menace. When an audiotape became public of Trump talking to an "Access Hollywood" host in explicit terms about grabbing women, and Reince Priebus, then the Republican National Committee chairman, suggested that Trump drop out of the race, he urged Priebus to wait and see how things played out.

People close to Trump are not sure if his remarks signaled an intention to fire Sessions, or were meant to coax him into a forced resignation, or were just the president's attempt to let off a plume of public rage — or all three at once.

Months ago, Trump mused to his family members in the White House and to other advisers that if he fired Sessions, and Rosenstein became acting attorney general, Rosenstein would have to recuse himself from the investigation because he had written a letter recommending the firing of James B. Comey, the former FBI director. That way, Trump would be able to push through a new attorney general fairly quickly.

But in recent weeks, Trump has become more aware of how hard it could be, given the investigations, to win Senate confirmation of a new attorney general, especially one who possesses the iron loyalty the president demands of Sessions.

Former colleagues expressed sympathy for Sessions on Thursday for having to deal with the mercurial Trump. And they expressed doubt that Sessions, a legislative loner who represented the far right wing of the Republican conference, would quit his job, which he views as personal vindication for the Senate's refusal to confirm him to a federal judgeship in 1986.

"Watching Sen. Sessions for the six years we served together, he never seemed particularly taken aback by anybody criticizing a position he took or a position that was uniquely his," said Sen. Roy Blunt, R-Mo. "He was often the only voice on an issue and had no problem being the only voice."

But Sen. Richard J. Durbin, D-Ill., who served on the Judiciary Committee with Sessions, questioned how Sessions could continue in his job after the president undermined him.

"If there was ever a clear vote of no confidence by a president in his attorney general, it was the New York Times interview," Durbin said. "I don't see how he can continue in this critical role in this administration."

Durbin said he believed Sessions had made a new assessment on the Russia investigation when he took over the Justice Department and realized that he had to recuse himself given questions about his failure to disclose his own contacts with Russian officials.

"For his own reputation and for his name, he stepped aside," Durbin said. "The president didn't hire him to step aside."

Sessions has fretted about being frozen out by Trump, and their interactions have been clipped and businesslike recently, according to a senior administration official close to both men. But Thursday, he vowed to soldier on.

In his five months as the nation's top law enforcement official, Sessions has made a notable mark on the Justice Department, rolling back some of the Obama administration's signature policies while emphasizing his own agenda.

He has directed federal prosecutors to pursue the toughest possible charges and sentences in all criminal cases, overriding guidance from former Attorney General Eric H. Holder Jr., who sought to ease penalties for some nonviolent drug offenses and reduce the harsh prison sentences such crimes can automatically bring.

This week, Sessions revived another controversial policy, further empowering the police to seize the personal property of people suspected of crimes but not charged, a practice many states have restricted.

"We are serving right now. The work we are doing today is the kind of work that we intend to continue," he said at a news conference announcing what he described as the dismantling of an online operation that sold narcotics and other illicit goods.

"I am totally confident that we can continue to run this office in an effective way," he added.