With more ships in the Arctic, fears of disaster rise 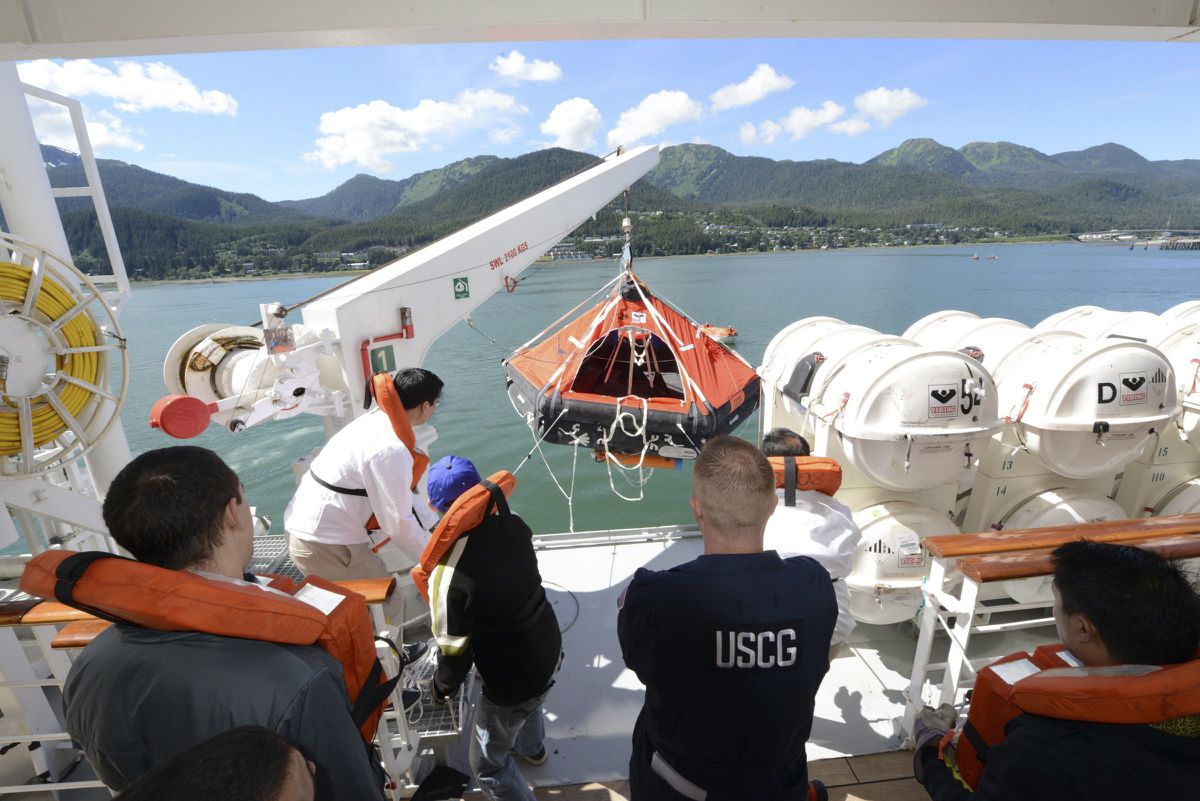 Lt. Ryan Butler, center back to camera, of the U.S. Coast Guard observes crew members of the Crystal Serenity as they test a crane and life raft before a Northwest Passage cruise, Juneau, Alaska, June 22, 2016. As global warming reduces the extent of sea ice in the Arctic, more ships will be plying waters farther north, which raises concerns about ship safety. (Petty Officer 2nd Class Jon-Paul Rios/U.S Coast Guard via The New York Times)

Lt. Ryan Butler, center back to camera, of the U.S. Coast Guard observes crew members of the Crystal Serenity as they test a crane and life raft before a Northwest Passage cruise, Juneau, Alaska, June 22, 2016. As global warming reduces the extent of sea ice in the Arctic, more ships will be plying waters farther north, which raises concerns about ship safety. (Petty Officer 2nd Class Jon-Paul Rios/U.S Coast Guard via The New York Times)

When the Crystal Serenity, a 1,000-passenger luxury liner, sails in August on a monthlong Arctic cruise through the Northwest Passage, it will have a far more utilitarian escort: a British supply ship.

The Ernest Shackleton, which normally resupplies scientific bases in Antarctica, will help with the logistics of shore excursions along the route from Alaska to New York through Canada's Arctic Archipelago.

But the escort ship will also be there should the Serenity become stuck in ice or something else goes wrong. The Shackleton can maneuver through ice and will be carrying emergency water and rations for the liner's passengers and 600 crew members, oil spill containment gear and a couple of helicopters.

As global warming reduces the extent of sea ice in the Arctic, more ships — cargo carriers as well as liners like the Serenity taking tourists to see the region's natural beauty — will be plying far northern waters. Experts in maritime safety say that raises concerns about what will happen when something inevitably goes wrong.

"It's what keeps us up at night," said Amy A. Merten, who works on maritime response issues at the National Oceanic and Atmospheric Administration.

Although nations with Arctic lands, including the United States, have agreed to assist each other in the event of disaster, there is very little emergency infrastructure in either U.S. or Canadian Arctic waters, or in Russia along what is known as the Northern Sea Route.

Merten and others give Crystal Cruises, the Serenity's owner, high marks for its preparations, and the ship, with the Shackleton tagging along, made its first Northwest Passage cruise last summer without incident. Edie Rodriguez, Crystal's president, said the company spent three years getting ready for that first Arctic voyage.

"Most important, it was about preparedness and safety," she said.

What keeps Merten and other experts on edge is the possibility that a ship could have a problem that would require an extensive search-and-rescue operation.

There are relatively few government icebreakers or cutters in the region, and a long-range airlift by helicopters would be extremely difficult. So an emergency operation would most likely rely heavily on other commercial ships that happen to be in the area. A rescue could take days.

"There's just no infrastructure for response," Merten said. "Things could be OK. But it would be a difficult situation."

Among the mishaps that might befall ships in the Arctic, much of which is still poorly charted, is a grounding that in a worst case could lead to a ship breaking up and sinking. In addition to the obvious risk to lives, such an event could potentially cause a spill of thousands of gallons of fuel — thick, heavy oil in the case of most cargo ships — that could be next to impossible to recover.

Mechanical failure, fire or a medical emergency are concerns as well.

Although the Arctic has not been the site of a major incident involving a cruise ship in recent years, a smaller liner, the Explorer, sank off the Antarctic Peninsula in 2007 after striking an iceberg. Fortunately several other ships were within 100 miles of the stricken ship, and the 150 passengers and crew were rescued after five hours in lifeboats.

Commercial ships in northern waters have occasionally run into trouble, sometimes with deadly results. In December 2004, the Selendang Ayu, a 740-foot Malaysian ship carrying soybeans and more than 1,000 tons of fuel oil, suffered an engine failure, drifted and eventually ran aground and broke apart in the Aleutian Islands in Alaska. Six crew members died when a Coast Guard helicopter that had just picked them up was swamped by a wave.

Sea ice, which completely covers the Arctic Ocean in winter, gradually melts in the spring and reaches its minimum extent in September. That minimum has declined by about 13 percent per decade compared with the 1981 to 2010 average, according to NASA. Scientists say warming, which is occurring faster in the Arctic than any other region, is largely responsible.

As climate change continues, more of the Arctic will be open to ships, and for longer. Some scientists predict that the region could be completely ice-free in summers by the 2030s or 2040s.

But the amount of activity overall in the region is still small, and a huge rush to the Arctic is not expected anytime soon. Even as ice coverage continues to shrink, conditions will remain variable enough that no shipping company with tight deadlines will try regular Arctic service.

"It only takes a little bit of ice to ruin your day," said Timothy Keane, senior manager for Arctic operations for Fednav, a bulk shipping operator based in Montreal. "So if ice is in a particular area that you need to go, you're still blocked from getting there."

But in September, Russia will start shipping liquefied natural gas to Europe and Asia from Siberia, using ice-strengthened 1,000-foot tankers that, by turning around and moving stern-first, can churn through ice up to 7 feet thick.

And while the Crystal Serenity, with its casino and other amenities, was not built with polar cruising in mind, more than two dozen smaller "expedition" class ships, designed to carry up to 200 passengers and handle moderate ice conditions, are under construction around the world.

Any ship that sails through coastal waters in Alaska, Canada and other Arctic nations is subject to inspection — to make sure it has the required safety equipment, for instance.

But the U.S. Coast Guard has only two working heavy icebreakers, and has not built a new one in four decades. In a May speech, President Donald Trump said "we're going to build many of them," although beyond design work, the source of money for actual construction is still unclear.

The amount of shipping in the Arctic is currently so small that it is difficult to justify the need for additional icebreakers or naval cutters in the region, or for a helicopter base that could aid ships far from land.

"You need investment and you need infrastructure to cover this gap," said Lawson W. Brigham, a former captain of U.S. Coast Guard icebreakers and now on the faculty at the University of Alaska, Fairbanks.

Russia is better prepared, with several dozen icebreakers and more on the way. The Russian military is also building Arctic bases that, while they have been seen in the West as an unwanted military expansion into the region, will have search-and-rescue capability.

But even in the Russian Arctic most of the focus is on ports, said Mikhail Grigoriev, an Arctic shipping expert and director of Gecon, a Russian consulting firm. "Sea routes are very poorly developed," he said, "and the time of approach of rescue vessels is considerable — up to several days."

Given the lack of infrastructure, many experts argue that the focus should be on preventing incidents — through better training and certification of mariners, and safety requirements for ships. A new Polar Code, developed by the International Maritime Organization, sets some safety standards, but critics say it does not go far enough and includes almost no environmental protection provisions.

Even relatively simple monitoring of ships can reduce the potential for disaster. Ed Page, a former Coast Guard captain, runs a private-public partnership, Marine Exchange of Alaska, that uses a network of radio receivers to watch over ships around Alaska. Exchange operators can contact vessels that are getting too close to shore — a ship should usually be far from land so that in the event of a mechanical problem there is time for repairs without running aground — and have them change course.

Page acknowledged that if something went disastrously wrong with a ship within the 1.5 million square miles of ocean his network covers, "it would be ugly."

"But we should stop worrying about what we're going to do when things go wrong," he said. "We should prevent things from going wrong."