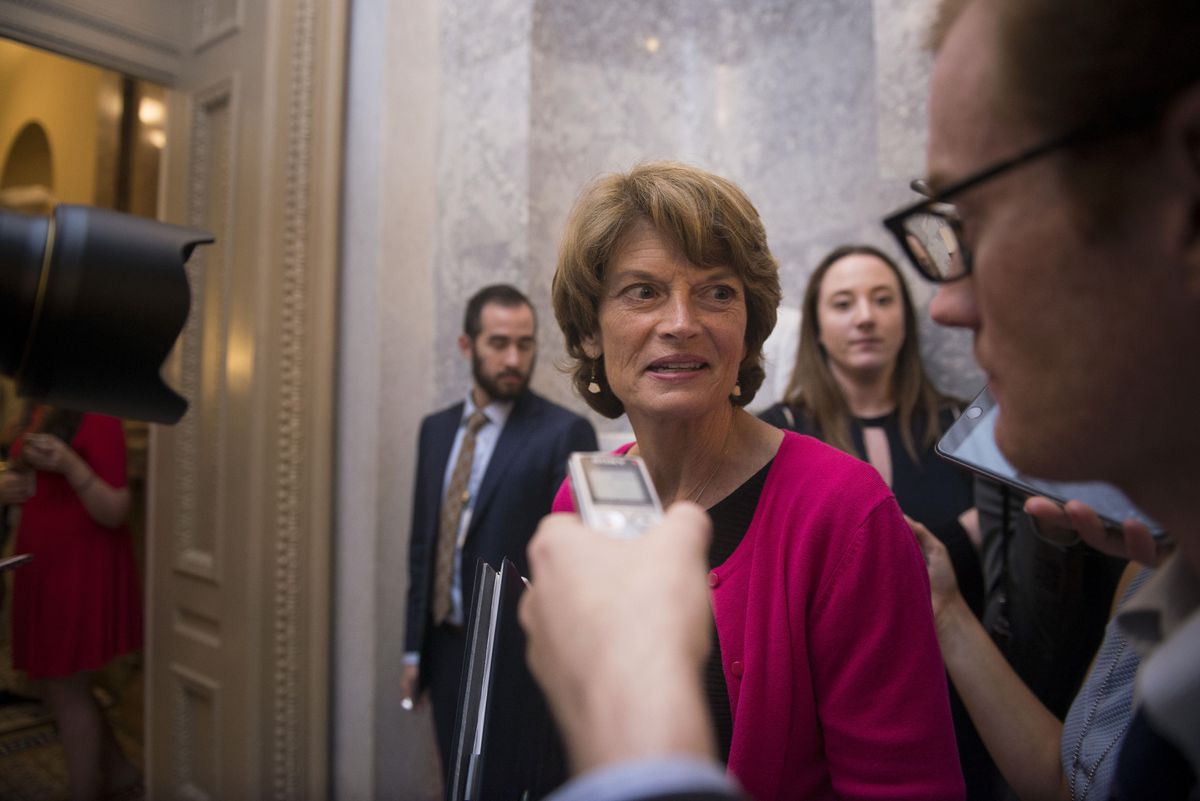 Sen. Lisa Murkowski, R-Alaska, speaks to reporters after voting against a slimmed-down Affordable Care Act repeal measure on Capitol Hill, in Washington, D.C., on July 28. The party’s senators trimmed their vision of a bill to repeal the health law, but Murkowski and two other Republicans turned on the bill in the dead of night. (Gabriella Demczuk / The New York Times)

Sen. Lisa Murkowski, R-Alaska, speaks to reporters after voting against a slimmed-down Affordable Care Act repeal measure on Capitol Hill, in Washington, D.C., on July 28. The party’s senators trimmed their vision of a bill to repeal the health law, but Murkowski and two other Republicans turned on the bill in the dead of night. (Gabriella Demczuk / The New York Times)

WASHINGTON — The recalcitrant senator kept crossing up the inexperienced new president on big-ticket legislation even though they represented the same party.

Frustrated and angry, the White House fought back, threatening retaliation both petty and portentous, eyeing federal jobs and programs in the state of the rebellious lawmaker to force obedience.

While this may sound like the current situation between President Donald Trump and Sen. Lisa Murkowski, R-Alaska, over her refusal to back the party line on health care, it was actually 1993. The senator was Richard Shelby, then a Democrat of Alabama, and the president was Bill Clinton as he began his first term and found the conservative Shelby to be a real irritant.

Unhappy with Shelby's commentary on the new president's economic plan, the Clinton White House raised the prospect of shipping some NASA jobs from Huntsville, Alabama, to the Johnson Space Center in Texas. The White House went so far as to limit Shelby to a single pass to a White House celebration of the University of Alabama's 1992 national title football team — a brutal slap, in Crimson Tide terms.

"I was the one who came up with the phrase, the taxman cometh," Shelby recalled in an interview. "That just set him off."

Presidents of both parties have often overplayed their efforts to strongarm a member of Congress. It's often not effective. In Shelby's case, it even accelerated his switch to the Republican Party.

Now, the Trump administration has been under scrutiny for its actions toward Murkowski and Sen. Dan Sullivan, also an Alaska Republican, after Sullivan let it be known last week that he got what he perceived to be a threatening phone call from Interior Secretary Ryan Zinke after Murkowski's opposition to advancing a Republican health care proposal.

Sullivan told Alaska Dispatch News that Zinke, whose department controls considerable resources in Alaska, had phoned both senators to let them know the state's relationship with the Trump administration had been put in jeopardy by Murkowski's vote. Howls of outrage followed, along with accusations of White House extortion.

On Sunday, Zinke, a former congressman from Montana, addressed the issue with reporters during an official stop in Nevada and called the accusation that he had threatened the lawmakers "laughable."

Whether the phone calls were misinterpreted or not, it was certainly a ham-handed effort. Every decision the administration now makes in regard to Alaska will be interpreted through the lens of the health care dispute and seen as some kind of punishment of innocent residents if the state suffers.

Not to mention the fact that Zinke was put in the position of challenging a lawmaker who oversees his budget and policy programs. Murkowski is the chair of both the Committee on Energy and Natural Resources and the appropriations subcommittee that funds the Interior Department.

She arguably has more control over some aspects of the agency than the secretary has.

"In my experience, it is not wise for a Cabinet secretary to bully the person who controls his purse strings," said David Hayes, former Interior deputy secretary during the Obama administration, who has worked closely with Murkowski. "It's very curious: He seems to have the relationship backward. In many respects, she is his boss."

Murkowski's stance against the administration is likely to bolster her at home in the short term. Sen. Susan Collins, R-Maine, who joined Murkowski in consistently opposing the president last week, received spontaneous applause from people awaiting their flights when she arrived at the Bangor airport last Friday.

"I've been doing this for a long time, and I've seldom seen threats to be very effective," said Sen. Roy Blunt, R-Mo.

In fact, the opposite tack has usually proved more effective, with lawmakers more likely to bend when offered benefits and goodies for their states. Carrots have produced more congressional wins than sticks.

Shelby said when the Clinton White House began discussing the job moves, he returned home and held a news conference to announce that "my vote is not for sale or lease to anybody because it belongs to the people of Alabama."

"Wow," he said, "the people rallied around me."

The Clinton administration ultimately backed off, but Shelby bolted for the Republican Party the day after Republicans swept into control of Congress in November 1994.

Shelby said the entire exercise of turning the screws on senators can be counterproductive.

"Tomorrow is another day up here," he said. "Murkowski, I'm sure, will be with us on a lot of votes."

The administration pushback is part of the life of the swing lawmaker, the one with the potential to make the difference between victory and defeat on important issues.

Sen. Jim Jeffords, R-Vt., was consistently under pressure from Republican White Houses over his career as he resisted tax cuts and other budget policies. He, too, suffered a White House snub in 2001 when he was not invited to a Rose Garden ceremony to celebrate the teacher of the year — a Vermonter.

The White House and its allies also made noises about rejiggering the New England Dairy Compact, a major Vermont issue.

Like Shelby, Jeffords ultimately left his party and stunned Washington by becoming an independent in May 2001, handing control of the Senate to the Democrats for most of the first two years of President George W. Bush's term.

So if there is a lesson to be drawn from the experiences of Shelby and Jeffords, it's that too much hardball from the White House can sometimes lead a lawmaker to decide to play for the other team.