Big tobacco’s new cigarette is sleek, smokeless – but is it actually healthier? 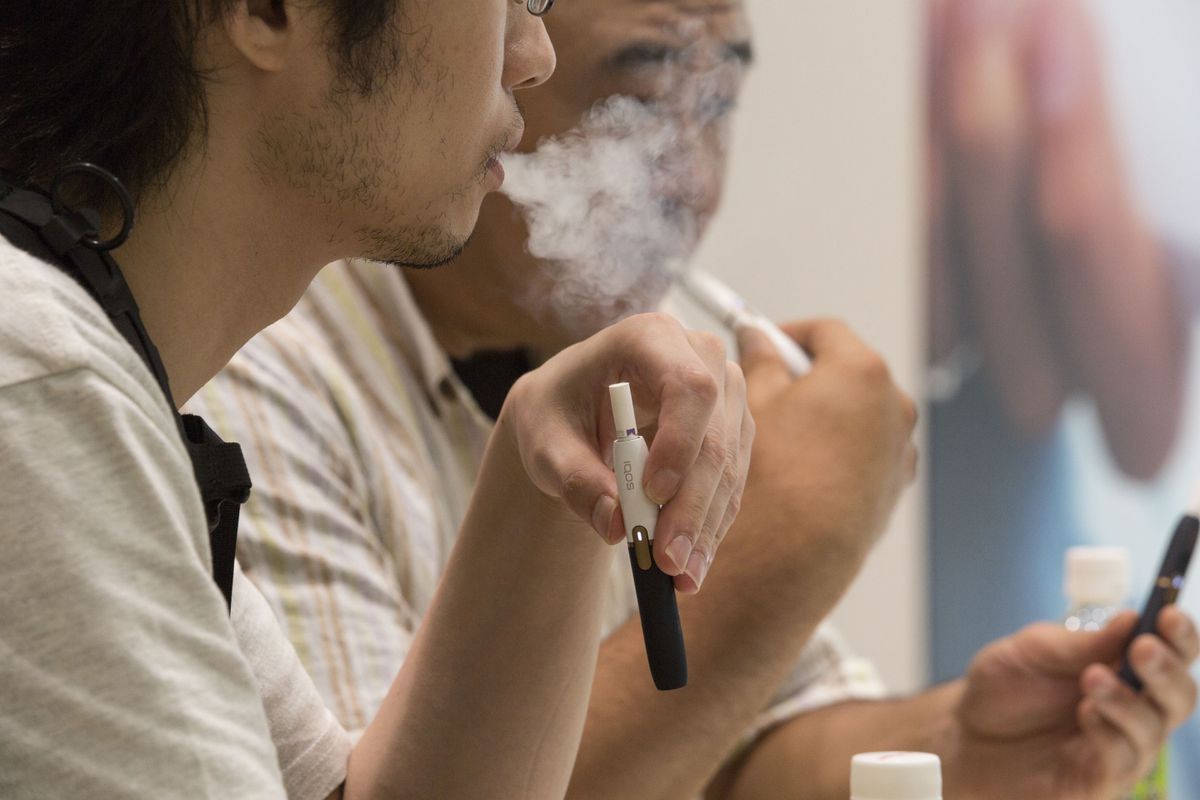 Customers try a new tobacco device at an IQOS store in Tokyo. Phillip Morris is trying to sell IQOS, a new kind of cigarette called heat-not burn. (Photo for The Washington Post by Shiho Fukada)

Customers try a new tobacco device at an IQOS store in Tokyo. Phillip Morris is trying to sell IQOS, a new kind of cigarette called heat-not burn. (Photo for The Washington Post by Shiho Fukada)

Philip Morris says it has created a less toxic cigarette – an innovation it claims could save lives and eliminate smoking in America.

The new technology, called IQOS, consists of a tube that gently heats up sticks of tobacco instead of burning them. By using heat instead of flame, the company says, IQOS eradicates 90 to 95 percent of toxic compounds in cigarette smoke.

The Food and Drug Administration is expected to decide in the next two months whether to allow IQOS into the U.S. market. And that has triggered heated debate and worries among health experts about whether IQOS will help or hurt public health in this country.

Among their most pressing concerns: whether the new device will lower tobacco-related deaths, or if it is just substituting one harmful product for another.

Fueling such doubts is the fact that many of America's leading health organizations and experts remain deeply suspicious of Philip Morris.

This is the company, they point out, that makes Marlboro – the world's best-selling cigarette – and misled the public for years about the hazards of smoking.

"They are masterful liars. That's not an exaggeration – that's a fact proven by decades of evidence," said Matthew Myers, longtime president of the Campaign for Tobacco-Free Kids. "So the question we're all asking ourselves is: What's their ultimate game plan with this thing?"

Only one independent study so far has examined the risks of IQOS and found higher levels of several toxic compounds produced by the device than Philip Morris has claimed. The company's response to the study was so forceful that the independent researchers have now gone silent, refusing to talk publicly about their work.

Even if Philip Morris' health claims turn out to be true, health officials warn, IQOS could be a Trojan horse. Smoking in America has dropped to an all-time low. Some health advocates worry Philip Morris – which spent $3 billion to develop IQOS – wants to use its new machine to halt that progress. If IQOS attracts new smokers, it could hook a new generation on nicotine.

"The skepticism is not surprising for us," said one of Philip Morris' chief scientists, Moira Gilchrist. "You don't have to trust or believe us. You don't have to take our word for it. But what we ask is that people have an open mind. Look at the science we've done on this and base your decision on that."

But even the harshest skeptics acknowledge that there is a chance Philip Morris is right and IQOS could save lives.

"If we're being honest, we're dealing with a big unknown here," said Myers, who has fought for three decades to keep tobacco products away from kids. "One thing's for sure: The stakes here are huge."

With two fingers, she pulled out what looked like a hollowed-out electronic cigar – the latest IQOS prototype.

To use it, she explained, you push into its hollow end a short modified cigarette, called a HeatStick. A heating blade inside the IQOS pierces the HeatStick and gently warms the tobacco inside.

Gilchrist lifted the IQOS and took a long drag. As she exhaled, a slight musty-sweet smell permeated the air.

"Because there's no combustion involved, there's no smoke," she said.

Unlike vaping machines, which use a liquid solution to deliver nicotine, the IQOS deliberately uses tobacco. Many smokers have trouble quitting cigarettes even after trying vaping, studies have shown. Philip Morris scientists argue that for smokers to quit, you need to offer something with the same buzz and taste of tobacco.

"You have to give them that satisfying experience," Gilchrist said. "You have to deliver nicotine at roughly the same speed and amount."

The first thing that now greets customers on Philip Morris' home page is this question: "How long will the world's leading cigarette company be in the cigarette business?"

Philip Morris chief executive André Calantzopoulos predicts that smokeless products like IQOS will one day be so common that his company stops selling all regular cigarettes. In a recent interview with the BBC, he said, "I hope this time will come soon."

The company – which makes the world's best-selling cigarette – has built a new $120 million research center in Switzerland to focus entirely on smokeless products. The gleaming glass-enclosed facility, called the Cube, consists of three wings – dubbed Earth, Wind and Air. (There is, notably, no section named Fire.) Of all the Cube's new products, IQOS is the most advanced. It is now sold in 25 countries.

But the clearest sign of its potential has been Japan.

Last spring, IQOS became available nationwide there, and in the brief time since, IQOS has grabbed 10 percent of Japan's tobacco market – a feat that has investors salivating over its U.S. prospects.

Philip Morris says 72 percent of users in Japan quit cigarettes entirely and converted to IQOS. That's significantly higher than the 7 percent quit rate among those who tried vaping and 6 percent quit rate of nicotine patch users in a trial published by the journal Lancet.

Japanese demand has so outstripped capacity that Philip Morris can't produce HeatSticks fast enough. It had to limit the number of IQOS devices sold in Japan. And last month, it shut down two cigarette plants in Europe to convert them into HeatStick factories.

This year, the company plans to more than triple its manufacturing capacity, from 15 billion HeatSticks to 50 billion. By the end of 2018, it plans to produce 100 billion.

When contacted by a Washington Post reporter, however, the researchers refused to talk. A spokeswoman for the University of Lausanne (where one of them works) explained in an email that after their study published, the bosses of all three received an alarming letter from Philip Morris.

Such a letter is almost unheard of in the scientific community, University of Lausanne spokeswoman Francine Zambano noted. Usually, if someone disagrees with a study, they contact the journal where it appeared or challenge its findings by publishing their own evidence.

When informed of Philip Morris' unusual letter to the researchers' bosses, Mitchell Katz, deputy editor of the journal JAMA Internal Medicine, which published the study, said: "That certainly smacks of intimidation. I've been deputy editor here eight years, and I've never seen that happen before."

The Swiss study compared the harmful compounds in the air generated by IQOS with those of regular cigarettes. The study found that although IQOS generated many toxic chemicals at lower rates, some were much higher than Philip Morris claimed. It also found that IQOS produced 295 percent more of one hazardous compound than traditional cigarettes.

In their study, the scientists accused Philip Morris of "dancing around the definition of smoke" and argued that "there can be smoke without fire."

Philip Morris has posted an academic rebuttal online, questioning the Swiss study's methodology and interpretation. Company officials would not discuss their letter to the Swiss bosses but defended their actions.

"When a study like that picks up so much media interest, smokers who have already converted to IQOS and been helped by it have the potential to be misled," spokesman Corey Henry said.

This isn't the first time tobacco companies have trumpeted the arrival of a healthier cigarette.

In the 1950s, they marketed filtered cigarettes as much safer, but that proved an exaggeration. In the 1970s, they came out with "light" and "low-tar" cigarettes, and it took health experts decades to prove those weren't safer at all. Internal documents showed tobacco manufacturers deliberately designed their light cigarettes to fool government smoke-testing machines.

At his office at the Campaign for Tobacco Free-Kids, Myers keeps a museum on his bookshelf of all the ways tobacco companies have tried to fool the public over the years. There are strawberry-shortcake-flavored products aimed at kids and tobacco embedded into dissolvable breath mint strips.

Myers worries IQOS – with its sleek, sexy, Apple-like design – could be used to attract younger consumers.

Brian King, a deputy director at the Centers for Disease Control and Prevention's Office on Smoking and Health, worries IQOS could make tobacco acceptable again. "We're finally at a place where smoking isn't accepted as normal and isn't allowed in public places. We're making progress on the smoking rate. All that could easily be reversed."

Stanton Glantz, a tobacco researcher at the University of California at San Francisco, says that even if IQOS reduces carcinogens, it could still cause serious heart problems because of nicotine and ultrafine particles. "It probably isn't as bad as a cigarette, but that's like saying jumping out of a 10-story building isn't as bad as jumping out a 50-story building."

"If you have a company willing to shift to a less harmful product, is that something we should be getting in the way of?" said Jonathan Foulds, a smoking cessation expert at Penn State University.

Ultimately, the FDA will have the final word on science and health concerns over IQOS.

Philip Morris' case for IQOS got a boost last month when the FDA's commissioner stressed the need for innovation and alternatives to cigarettes in a speech.

The agency is expected to decide in the next two months whether IQOS can be sold here, but it won't rule on its health claims until the beginning of next year.

If the FDA approves those health claims, IQOS would be the first tobacco product to carry the U.S. government's stamp as a less harmful alternative to cigarettes – a marketing coup for Philip Morris. And competitors are already racing to catch up by rushing out prototypes of their own.

Included in Philip Morris' FDA application are more than 2 million pages of scientific data. Health organizations – such as the American Lung Association and the American Cancer Society – are just beginning to sift through them to make their recommendations to the FDA.

"If you can find a way to keep your consumer alive longer," he said, "you'll make more money off them. It's a better business model."