Hunting a killer in Oklahoma: Sex, drugs and the return of syphilis 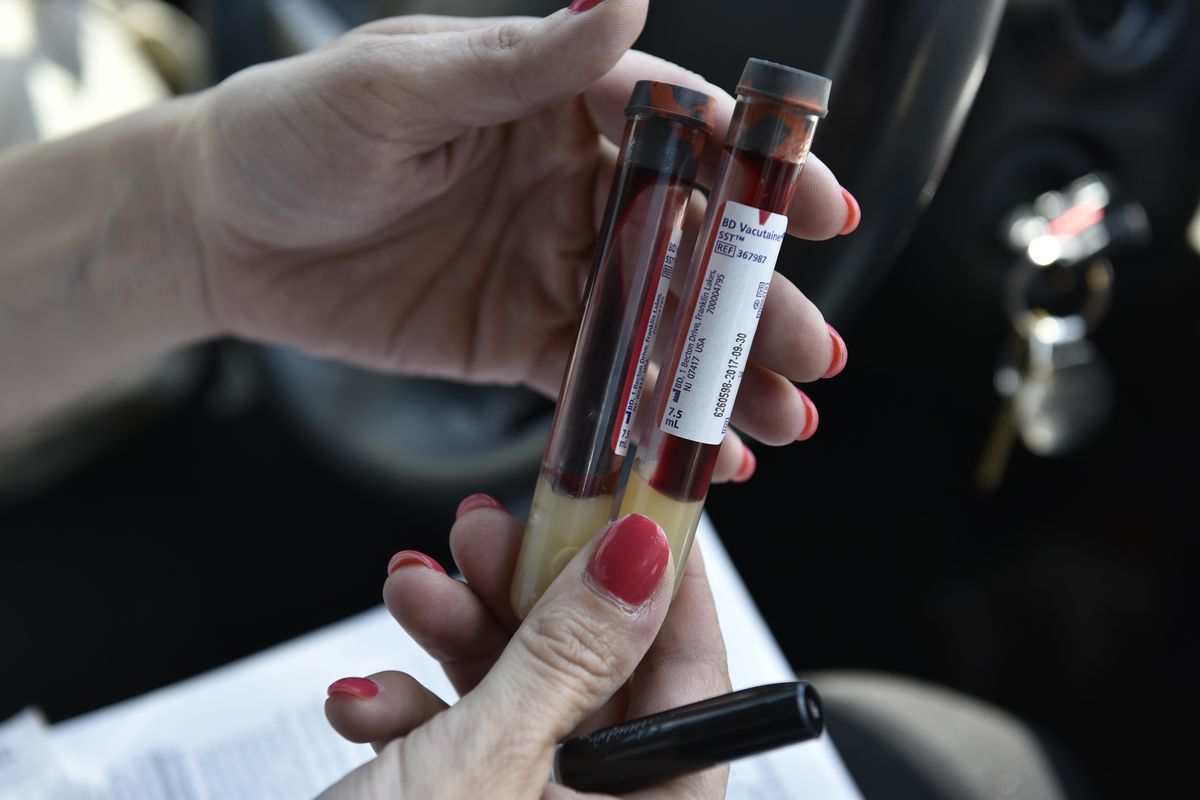 OKLAHOMA CITY — For months, health officials in this socially conservative state capital have been staggered by a fast-spreading outbreak of a disease that, for nearly two decades, was considered all but extinguished.

Syphilis, the deadly sexually transmitted infection that can lead to blindness, paralysis and dementia, is returning here and around the country, another consequence of the heroin and methamphetamine epidemics, as users trade sex for drugs.

To locate possible patients and draw their blood for testing, Oklahoma's syphilis detectives have been knocking on doors in dilapidated apartment complexes and dingy motels, driving down lonely rural roads and interviewing prison inmates. Syphilis has led them to members of 17 gangs; to drug dealers; to prostitutes, pimps and johns; and to their spouses and lovers, all caught in the disease's undertow.

"Syphilis doesn't sleep for anyone," said Portia King, a veteran Oklahoma state health investigator. "We have 200 open cases of sex partners we're looking for. And the spread is migrating out of the city."

It took months for investigators to realize Oklahoma City had a syphilis outbreak. Last fall, the juvenile detention center reported three cases — a boy and two girls, the youngest, 14. The center had never had a syphilis case in seven years of testing for it.

Investigators were mystified: The teenagers did not know each other, live in the same neighborhood or attend the same school.

Then, in February, a prison inmate tested positive. In interviews, he listed 24 sex partners — some his own, others the so-called pass-around girls for gangs, usually in exchange for heroin or methamphetamine. Contact information from the Entertainment Manager, as he called himself, pointed the way to a syphilis spread that, by March, led health officials to declare an outbreak, one of the largest in the country.

Although syphilis still mostly afflicts gay and bisexual men who are African-American or Hispanic, in Oklahoma and nationwide, rates are rising among white women and their infants. Nearly five times as many babies across the country are born with syphilis as with HIV.

Syphilis is devilishly difficult to contain, but may be even more so now. Because most doctors haven't seen a case since the late 1990s, they often misdiagnose it. The cumbersome two-step lab test is antiquated. Although syphilis can be cured with an injection, there has been a shortage of the antibiotic, made only by Pfizer, for over a year.

And funding for clinics dedicated to preventing sexually transmitted diseases is down. In 2012, half of state programs that address sexually transmitted infections experienced reductions; funding has largely stayed flat since then. The Trump administration has proposed a 17 percent cut to the federal prevention budget.

Nearly 24,000 cases of early-stage syphilis, when the disease is most contagious, were reported in the United States in 2015, the most recent data. That was a 19 percent rise over the previous year. The total for 2015, including those with later-stage disease, was nearly 75,000, according to the Centers for Disease Control and Prevention.

The way to shut down an outbreak is to locate all the sex partners of people who are infected and persuade them to get tested, treated and disclose other partners. That task has fallen on a handful of the health department's disease intervention specialists.

This most recent wave of infections, spread through gang networks and prostitution rings, has made their jobs not only difficult but also dangerous.

Erinn Williams, the lead field investigator for the Oklahoma City outbreak, drove slowly down a one-lane gravel road curtained by overgrowth and bristling with barbed wire and "No Trespassing" signs.

Williams, 39, life-seasoned by an Alaska upbringing, Air Force training and two small daughters, usually makes these visits alone. She keeps her baby's car seat in the back, to allay suspicions that she may be an undercover police officer.

"What you do is your business," she tells the wary. "I'm here because I care about your health."

She is accustomed to stopping by houses with locks punched out; to being warned off by drug dealers; to wearing comfortable shoes, the better to run away in.

She pulled up to a clearing. Across a ragged lawn, she could see a battered blue trailer surrounded by pickup trucks and a stand of trees. Access was blocked by an iron fence, monitored by video cameras.

Williams pushed a call button. "Hi, I'm here from the health department. Can I talk to you? I have some news."

A young woman hesitantly crossed the grass. For months she had avoided health workers. Once, an investigator spotted her slipping in through a side entrance to her mother's house; at the front door, the mother denied that her daughter was there.

Fresh-faced, her blond hair in a ponytail, the woman looked healthier than most people Williams visits, with their grayish skin, abscesses and mottled veins.

Williams was gentle but direct: "Your blood test results came back. It's positive for syphilis."

The woman buried her face in her hands. "I'm so embarrassed," she sobbed. (Bound by confidentiality rules, Williams did not disclose her name.)

"Is that why my baby died?" she asked.

"Can my kid get it? We sometimes share the same glass."

The woman insisted she had slept with only two men that year — her boyfriend and her ex, the father of the baby who had died.

Williams, who knew the woman's Facebook page revealed many friends in a gang central to the outbreak, asked her to think carefully about whether there were more. We never reveal your name, she said, just as we cannot tell you who gave us yours.

The woman shook her head.

It was time to coax the woman into treatment. Just an injection and you will almost certainly be cured, Williams said, offering to drive her to the clinic. Her boyfriend too, Williams added.

He wasn't around, the woman said, but she promised they would be there in the morning.

Are you sure you don't want to go now? Williams asked.

Again, the woman shook her head.

Reluctantly, Williams got in her car and drove away.

Syphilis, caused by bacteria, has been well known for centuries, chronicled as a scourge since at least the 1400s.

In 1932, the U.S. government began the ignominious "Tuskegee Study of Untreated Syphilis in the Negro Male" to observe the progress of the disease in black Alabama sharecroppers. Although penicillin had become accepted as the cure by 1945, Tuskegee researchers left the men untreated until 1972, when the study was shut down.

By then, largely because of treatment and public education, syphilis was disappearing. A generation of physicians rarely learned to recognize it firsthand.

But with the AIDS epidemic, syphilis surged, peaking around 1990. It was most common — and still is — among men who had sex with men, often those whose HIV status made them vulnerable to other sexually transmitted infections.

Once again, public health campaigns sent syphilis into retreat. By 2000, only 5,970 cases were reported in the United States, the lowest since 1941, when reporting became mandatory.

But in the last few years, it has crept back.

Here in Oklahoma City, 199 cases have been connected so far this year. More than half the patients are white and female. The youngest girl is 14; the oldest man, 61. Three stillbirths have been attributed to syphilis and 13 of the infected were pregnant women.

Rare permutations are now more common. Ocular syphilis, which can strike at any stage of infection, often appears as blurred vision and reddened eyes. Congenital syphilis can cause deformed bones in newborns.

Many people never suspect they have the disease. Early symptoms, including genital lesions and, later, rashes on palms and soles, have led patients and health care providers to mistake it for herpes or allergic reactions. The disease can lie dormant for decades and then affect the liver, joints, blood vessels.

Once people are treated, though cured, they will almost always test positive. It is difficult to know whether a positive result indicates a new infection. After transmission, the bacteria may take three months to register. Those who test negative may have the disease.

This spring the Centers for Disease Control called for educating doctors and nurses about symptoms, testing pregnant women considered at risk and developing a better diagnostic test.

The cure for syphilis — usually two injections of Bicillin L-A, a type of penicillin — is relatively simple. But supplies have dwindled. Recently in Oklahoma, there were only seven doses statewide. Pfizer announced that stockpiles would be replenished by the end of 2017.

Dr. Vivian L. Wilson is medical director for eight community health clinics. In 37 years of practice, she has seen perhaps two cases of syphilis. But as a black Alabamian, she knows well the Tuskegee legacy. Though she appreciated a recent refresher course the state provided for staff members, the standard education materials, she noted, are severely outmoded.

"All the photographs still show patients who are Afro-American men," Wilson said. "What message does that send?"

After several months, dispirited Oklahoma investigators acknowledged that old-school tactics for locating contacts, like knocking on doors and cold-calling, were not very effective. Many people they sought are transient and use disposable phones.

"But they want to stay connected to their friends and their drugs," said King, a supervising investigator. "So they're all on Facebook. That's where we're finding them."

Through Facebook, investigators memorize faces and gang tattoos, and follow the flare-ups and flameouts of relationships. As gang members and dealers post partying plans, the sleuths determine where to point their investigation. They send potential patients messages through Facebook.

Williams' team realized they were tracking a spread that reached back to last summer, involved members and associates of 17 gangs, and had infected young people from stable backgrounds who had used prescription opioids, then heroin. Patients often had symptoms that were a signature of this outbreak: weeping genital warts, called condylomata lata; patchy hair loss; and mucosal oozes inside the mouth.

They have come to understand why more than half of this outbreak's victims are women: "The men give up the women's names," King said. "But the women are too loyal or afraid to give up the men. "

But recently investigators persuaded a gang leader to text members, ordering them to contact Williams.

Every day, the team checks arrest reports for people they are seeking. Chloe Hickman interviews inmates. Wearing glasses and no makeup, inclined toward modest cardigans, she doesn't come across as someone who chats up gang members about their sex lives.

"Most of them don't know what syphilis is. When I say it's curable, they relax. And they'll give me names."

Usually such efforts lead to sagas of unrelenting grimness: mothers who prostitute daughters, and men who forcibly inject runaways with drugs to hook them, a practice known as guerrilla pimping.

Acquaintances of the investigators often dismiss their work as disgusting. For support, the women call each other daily, to laugh and vent.

Williams, on the job for eight years, said it gets to her, but she cannot let it go. "I remind myself that I'm not trying to fix all their problems," she said. "Just one."

By 10 o'clock the next morning, Williams had arranged to pick up one person for treatment, been stood up by another and was texting with a man who refused her offer of a blood draw, claiming that needles made him anxious. She had driven a woman to the clinic, after waiting outside her house as, apparently, the woman was getting high on meth.

Now at the clinic, the woman seemed to have fled. Williams and nurses ran through hallways, looking for her.

One victory: The woman from the trailer was in the waiting room. But she was alone. In the parking lot, her boyfriend sat out the appointment in his pickup truck, motor idling. He would not come inside for treatment.

He would almost certainly reinfect his girlfriend. And Williams would have to persuade her to be tested and treated, yet again.