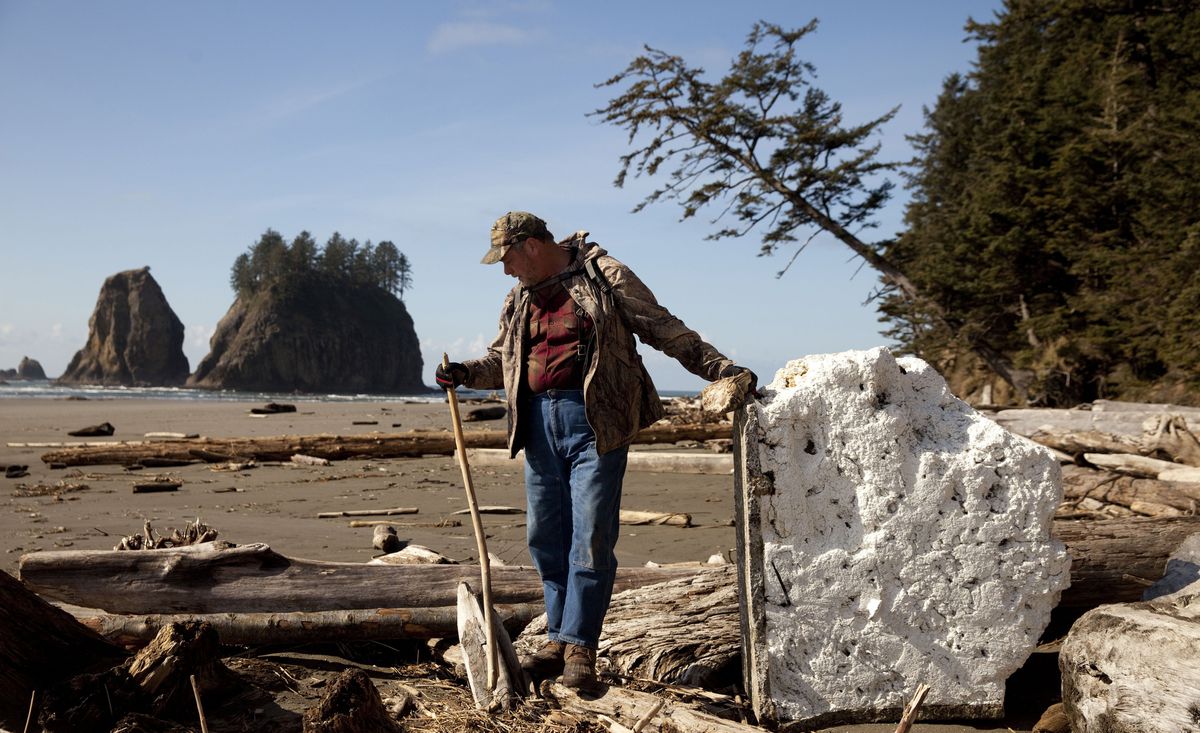 Longtime Forks resident John Anderson, who has been beachcombing the Olympic Peninsula since 1976, finds a Styrofoam piece of dock that likely came from Japan after the 2011 tsunami, March 7, 2013, along the Northwest coast. (Erika Schultz/Seattle Times/MCT)

Longtime Forks resident John Anderson, who has been beachcombing the Olympic Peninsula since 1976, finds a Styrofoam piece of dock that likely came from Japan after the 2011 tsunami, March 7, 2013, along the Northwest coast. (Erika Schultz/Seattle Times/MCT)

In 2011, a massive earthquake shook Japan and reshaped the seafloor. The quake shoved an area the size of Connecticut up by 30 feet. The tsunami that followed killed roughly 18,000 people. As water swamped the Fukushima Daiichi nuclear power plant, three reactors melted down. Japan's wounds are still healing.

The tsunami swept 5 million tons of debris into the ocean. Much of the junk did not degrade. Fiberglass boats, far-flung buoys and plastic shards swirled through the Pacific. Some of the objects came to rest half a world away, like the 60-foot-long polystyrene dock that landed in Oregon in the summer of 2012.

The dock completed its 4,000-mile journey by beaching itself close to Oregon State University's Marine Science Center. A university biologist who specialized in marine invasive species was one of the first people to approach it. Researchers later discovered that the dock harbored close to 100 Japanese species.

"That was the neon light," said marine biologist James Carlton, a Williams College professor based in Mystic, Connecticut. "That was the harbinger of things to come."

Carlton and a team of fellow scientists realized the Pacific Northwest faced a flood – not of water but borne by it, of unsinkable junk caked with marine life.

No one could stop the flood, but the researchers could at least document it. The scientists created a network of volunteers in Hawaii and Alaska, down the Pacific Northwest to the middle of California. State and local officials, park rangers and legions of citizen scientists reported or bagged up what became known, in the biologists' lingo, as JTMDs: Japanese tsunami marine debris. (None of the debris, Carlton said, showed any traces of radiation.)

"If a boat landed on the beach in San Francisco," Carlton said, "I'd get a call in my lab within a couple of hours."

The JTMDs ferried a lot of animals, as the scientists described in a paper published Thursday in the journal Science. During six years of study, from June 2012 to February, Carlton and his colleagues counted more than 280 species of Japanese hitchhikers on 600 pieces of debris. Most were spineless marine critters: sea stars, sea slugs, oysters, barnacles, mussels, amphipods, bryozoans and isopods. Only a few alien arrivals, two species of Japanese fish, had backbones.

This was unlike anything Carlton had witnessed in his 50 years of studying marine invasions, he said. "As time went on, the eyebrows keep going higher and higher. The jaw keeps dropping lower and lower."

Although the scale of the event was unprecedented, the concept – that rafts carry animals across oceans – was not.

"This is a really nice example of the very important role that long-distance dispersal in general, and rafting in particular, plays in structuring global patterns of biodiversity," said Ceridwen Fraser, a marine biologist at the Australian National University who was not involved with this research.

Transoceanic crossings have happened for millions of years. A recent genetic study of trapdoor spiders found that they must have crossed on a raft from Africa to Australia a few million years ago; the spider relatives on each continent were too closely related to have last shared an ancestor when Africa and Australia were still geologically connected, some 100 million years back.

Humans have witnessed these arrivals, too. In one well-documented case, 15 iguanas floated atop a cluster of uprooted trees to the Caribbean island of Anguilla in 1995. The lizards have since established a breeding population on the island.

Of the Japanese species that arrived on the tsunami debris, about a third were already present on the American Pacific coast. But the foreign animals colonized the wreckage long before the debris came close to shore, Carlton said. The authors of the recent study tracked how currents propelled the debris. The JTMDs spent the bulk of their journey at sea. "It comes to shore within a few days, acquired by the coastal current – and then, bam! Onto the beach."

The debris at sea becomes like "traveling villages," Fraser said. "Many rafting organisms brood their young – so their kids grow up on the same raft." A raft doesn't have to be artificial. Fraser and her colleagues tracked marine life that moved hundreds of miles while attached to floating kelp.

But the JTMDs were mostly synthetics: fiberglass, polystyrene, polyvinyl chloride, material that stayed afloat and wouldn't degrade. Wood carried away by the tsunami probably sank, waterlogged or bored with holes by sea creatures.

That we've replaced wood with plastics was a major factor in this tsunami-driven dispersal, Carlton said. The last time a tsunami hit Japan's Sanriku coast, in 1933, the population lived in small villages with wooden homes.

The other factor was coastal development. "That whole (village) system is gone, replaced with cities and vast infrastructure," Carlton said. "What we've done is change the world of what can be cast into the ocean."

The combination of plastics plus coastal mega-developments, he said, was a "state change" that has occurred around the globe. Although the scientists do not have immediate plans to study the wreckage from recent hurricanes in the Caribbean and Gulf of Mexico, Carlton said the debris field may be assessed "when things return to a better quality for life for everyone."

Tsunami debris continues to wash up along the Pacific Northwest, most frequently following spring currents. Carlton said he expects the objects and their living cargo to arrive for the next 10 springs to come.