Appetite for fentanyl grows in the U.S. 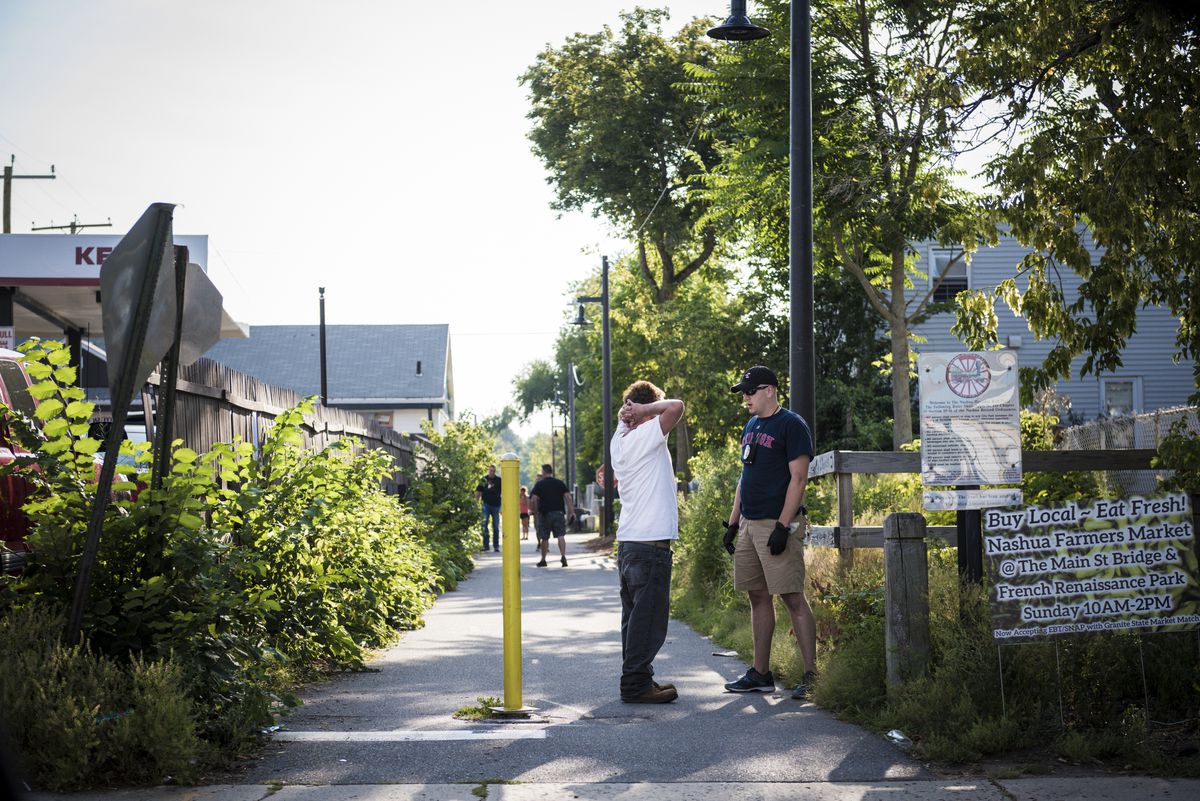 In August, a plainclothes officer with the Nashua Police Department narcotics unit speaks to a man who was spotted allegedly taking part in a drug deal on a bike path in Nashua, New Hampshire. (Photo by Ian Thomas Jansen-Lonnquist for The Washington Post)

In August, a plainclothes officer with the Nashua Police Department narcotics unit speaks to a man who was spotted allegedly taking part in a drug deal on a bike path in Nashua, New Hampshire. (Photo by Ian Thomas Jansen-Lonnquist for The Washington Post)

NASHUA, N.H. – Michelle MacLeod died in a tough part of town known as the Tree Streets, where many of the streets have names like Ash, Palm, Chestnut and Walnut. Kevin Manchester, who provided the fentanyl that killed her, lived on Pine.

Manchester, 27, went to prison for selling drugs that proved lethal – a "death- resulting" charge that prosecutors are using more frequently as they battle the opioid epidemic.

"He had no pause from what he had done, knowing full well he had killed that girl," said Jon DeLena, the assistant special agent in charge in New Hampshire for the U.S. Drug Enforcement Administration. "It didn't slow him down at all."

The DEA points to the Manchester case as a victory, but it also highlights the challenges for law enforcement agencies as they seek to curb the spread of fentanyl. Manchester, a small-time dealer who was using his own product, was part of a wave of addiction that has worsened as the drugs have evolved, with fentanyl posing special problems because it is extremely potent, easily transported and highly desired.

As President Donald Trump prepares to declare the opioid epidemic a national crisis, the law enforcement community is racing to contain the spread of fentanyl, which has largely replaced heroin on the streets here in opioid-ravaged New England and is increasingly the cause of fatal overdoses nationwide.

The drug crisis is both a law enforcement issue and a public health emergency, a decentralized disaster that authorities understand they cannot solve with handcuffs and prison bars alone. Because the drug abusers often are themselves the dealers, the localized drug networks turn police work into a game of whack-a-mole.

Much of the fentanyl that winds up in New England is manufactured in Mexico using precursor materials obtained from China, the DEA says. It is then smuggled into the United States.

Some of the illicit fentanyl arrives via the mail. Last week the Justice Department announced charges against two Chinese nationals who sold fentanyl to Americans via the Internet.

The opioid crisis here didn't pop up overnight. Residents of the region have always been heavy users of prescription opioid painkillers, DeLena said. The drug cartels realized that this was a ripe market for heroin.

"It was garbage heroin: It was 17, 18 percent purity," DeLena said, noting that about two years ago drug dealers began mixing fentanyl into the heroin supply to boost its purity and potency. "They started telling people they had a new, cleaner version of heroin. China White, they were calling it."

Legally manufactured for medical use, fentanyl can be a godsend for patients in extreme pain, including people at the end of life. But illicit fentanyl is boosting profit margins on the streets. The synthetic opioid is attractive to dealers because, unlike heroin derived from the poppy plant, it's not subject to the vagaries of agriculture.

Fentanyl generally comes in a white or off-white powder that can be mixed with other powdered drugs – not just heroin but also cocaine or methamphetamine. Some street-level dealers probably didn't know they were selling drugs laced with fentanyl, authorities say, which has contributed to overdose deaths, including among cocaine users.

But others do know the fentanyl is in the mix, and their addicted customers want the most powerful product even if it's potentially deadly. To some addicts, a near-death experience is not an error. It's the dream.

The law-enforcement strategy against drug trafficking is traditionally to go up the ladder from street dealers, caught in the act, to their bosses and ultimately to kingpins.

The fentanyl and heroin in this part of New England often is funneled through Lawrence, Massachusetts, via drug traffickers with ties to the Dominican Republic, according to the DEA and police in Lawrence and Nashua. A major drug raid in May in Lawrence resulted in 34 arrests on drug, gun and immigration charges.

Profits from Lawrence are typically diverted to the Dominican Republic, according to the DEA. Michael Ferguson, special agent in charge for the DEA in Boston, said the agency is working with Dominican authorities to seize property there that has been obtained with drug money.

The old mill town now has what officials call "milling operations," and they're not making textiles as they did many decades ago. A milling operation is typically a rental apartment with as many as 30 blenders. The blenders are used to mix fentanyl with inert fillers or perhaps heroin, cocaine or methamphetamine.

The fentanyl often is unevenly distributed in bags when its sold. That can explain why some people die from overdoses while others survive. As DeLena puts it, describing a situation very much like what happened to Michelle MacLeod, "She got the bad corner."

In Lawrence, drug transactions typically happen not far from one of the freeways. Two drivers will meet on a sleepy side-street when people are at work or at school or shuttered inside. The cars face opposite directions, and the drivers do the transaction hand to hand, window to window. A 10-gram package of heroin or fentanyl is called a "finger." The exchange is over in 30 seconds or less.

Sometimes the dealer will be on foot.

"They typically square the block, and take four lefts and the customer drops him back to where they started," says David Moynihan, a 48-year-old Lawrence police narcotics detective.

The drug dealers use rented vehicles registered to fictitious businesses. Suspects taken into custody often have multiple identities, and police lament that they don't know whom they've just locked up.

"I'm on the third generation of arresting people now," Moynihan says. "I've arrested the grandfather, the father, and I've just arrested the son for selling drugs."

In the past couple of years, the drug suppliers have essentially deputized the addicts to become the drug distributors, DeLena said. The addicts will travel to Lawrence for product and bring some extra to their home communities, assuming all the risk.

"It's the Amway model. They have created this pyramid effect," DeLena said. Addicts used to go to Lawrence to buy just enough for their own use, he said, but "now they're stopping you and saying, 'Take more, bring back the money when you have it.' "

Brian Kenney, head of the narcotics unit in Nashua, says stepped-up law enforcement, enabled by greater funding, has resulted in some progress in stemming the epidemic. But he has noticed something about the overdoses: There aren't as many of them, but more of the overdoses are fatal.

"The potency of the stuff that is out there is so much stronger that I'm still getting my deaths," he said.

Many of the users in Nashua are people who became addicted to prescription painkillers – often after a work accident – and wound up addicted to street drugs, he said. Kenney describes the pitiable scenes when he makes an arrest: "They break down talking to me. They say, 'I can't believe this happened to me. I was a regular guy.' "

The drug epidemic swept up Manchester and MacLeod, who lived a few blocks apart.

He had been prescribed an opioid painkiller after a high school lacrosse injury and then secretively became a drug abuser, according to his lawyer, public defender Sarah Newhall. Drug and alcohol abuse got him kicked out of college in his first semester. He then worked various jobs, found love, started a family and had two children. But after multiple stints in rehab he was using drugs again by early 2016.

MacLeod, 31, had a fiance and two young children of her own. Her mother, Barbara MacLeod, said in court that Michelle completed cosmetology school but had struggled with depression after spending two years caring for her brother's disabled son.

On Jan. 22, 2016, MacLeod and Manchester pooled their money, and she drove him to the Lawrence area, where he met a source who sold him fentanyl, authorities said. MacLeod was found dead the next day of an overdose. Police used messages on her phone to identify Manchester as the supplier, and they set up a sting operation. Manchester sold the fentanyl four more times.

Manchester faced a potential sentence of life in prison but agreed to a plea deal with a sentence of 10 to 40 years. In a statement to the court at his sentencing hearing, he said he hadn't intended any harm to anyone. In apologizing, he described his own struggle with drug addiction: "I am not a monster."

MacLeod's mother, Barbara, addressed the court, choking up as she spoke.

"Kevin Manchester has shattered our family," she said. "No penalty will bring back my baby girl. We are all God's children, Mr. Manchester, so my heart aches for you and your family also. They have lost you, too. I can only hope that your incarceration is long enough to save the lives of other children and long enough to repair your damaged soul."

Judge Jacalyn Colburn, in agreeing to the plea deal, said she didn't think Manchester is a monster but that his decision to keep selling the fentanyl after learning it had killed MacLeod "cannot be excused."

Colburn lamented that this was yet another tragedy in an ongoing crisis: "This epidemic and the families that are caught up in it, it's bigger than any of us ever imagined it would become, and it doesn't seem to be going away."