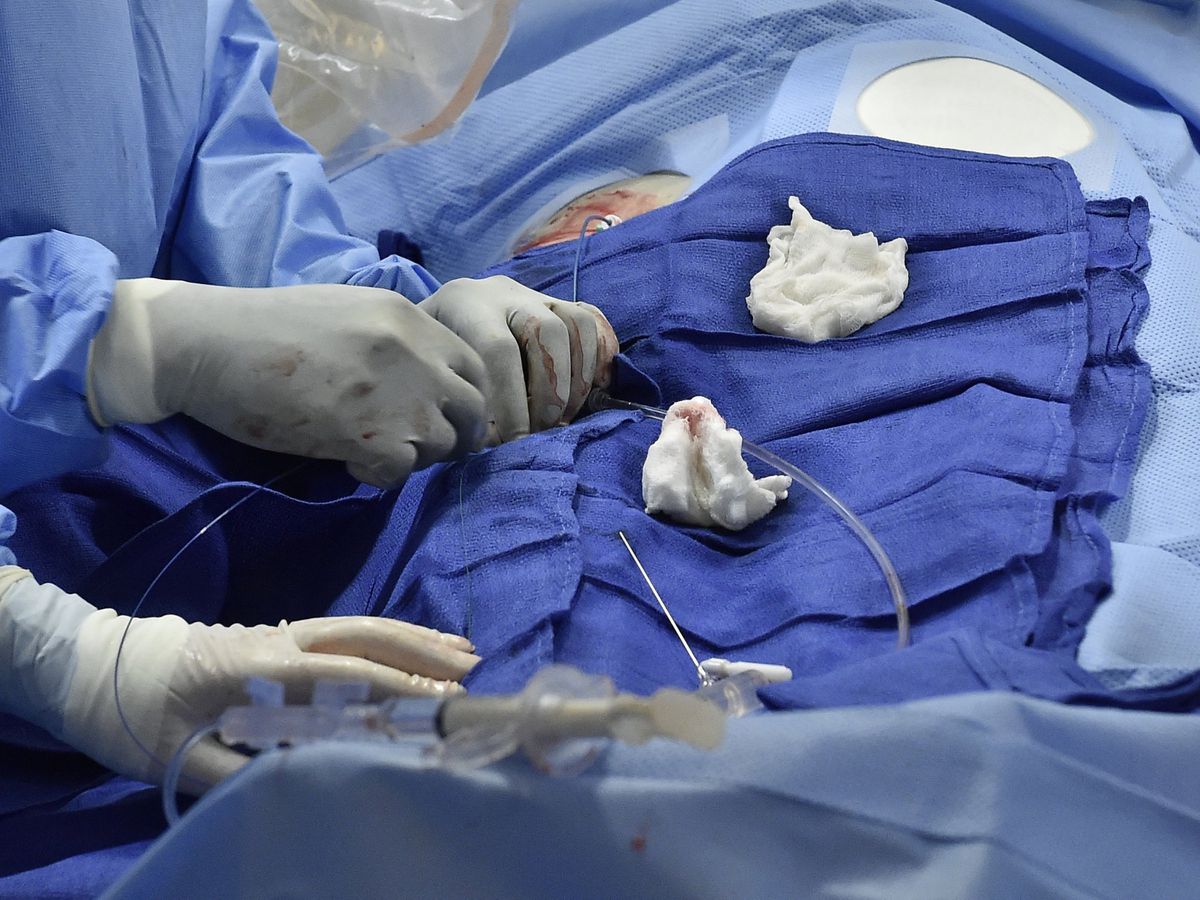 FILE – A coronary stent is deployed through the femoral artery of a patient with a blocked artery. (Jill Toyoshiba/Kansas City Star/TNS)

FILE – A coronary stent is deployed through the femoral artery of a patient with a blocked artery. (Jill Toyoshiba/Kansas City Star/TNS)

A procedure used to relieve chest pain in hundreds of thousands of heart patients each year is useless for many of them, researchers reported Wednesday.

Their study focused on the insertion of stents, tiny wire cages, to open blocked arteries. The devices are lifesaving when used to open arteries in patients in the throes of a heart attack.

But they are most often used in patients who have a blocked artery and chest pain that occurs, for example, walking up a hill or going up stairs. Sometimes patients get stents when they have no pain at all, just blockages.

Heart disease is still the leading killer of Americans — 790,000 people have heart attacks each year — and stenting is a mainstay treatment in virtually every hospital. More than 500,000 heart patients worldwide have stents inserted each year to relieve chest pain, according to the researchers. Other estimates are far higher.

Several companies — including Boston Scientific, Medtronic and Abbott Laboratories — sell the devices, and inserting them costs from $11,000 to $41,000 at hospitals in the United States.

The new study, published in the Lancet, stunned leading cardiologists by countering decades of clinical experience. The findings raise questions about whether stents should be used so often — or at all — to treat chest pain.

"It's a very humbling study for someone who puts in stents," said Dr. Brahmajee K. Nallamothu, an interventional cardiologist at the University of Michigan.

Dr. William E. Boden, a cardiologist and professor of medicine at Boston University School of Medicine, called the results "unbelievable."

Dr. David Maron, a cardiologist at Stanford University, praised the new study as "very well conducted" but said that it left some questions unanswered. The participants had a profound blockage but only in one artery, he noted, and they were assessed after just six weeks.

For the study, Dr. Justin E. Davies, a cardiologist at Imperial College London, and his colleagues recruited 200 patients with a profoundly blocked coronary artery and chest pain severe enough to limit physical activity, common reasons for inserting a stent.

All were treated for six weeks with drugs to reduce the risk of a heart attack, like aspirin, a statin and a blood pressure drug, as well as medications that relieve chest pain by slowing the heart or opening blood vessels.

Then the subjects had a procedure: a real or fake insertion of a stent. This is one of the few studies in cardiology in which a sham procedure was given to controls who were then compared to patients receiving the actual treatment.

In both groups, doctors threaded a catheter through the groin or wrist of the patient and, with X-ray guidance, up to the blocked artery. Once the catheter reached the blockage, the doctor inserted a stent or, if the patient was getting the sham procedure, simply pulled the catheter out.

Neither the patients nor the researchers assessing them afterward knew who had received a stent. Following the procedure, both groups of patients took powerful drugs to prevent blood clots.

The stents did what they were supposed to do in patients who received them. Blood flow through the previously blocked artery was greatly improved.

Cardiologists said one reason might be that atherosclerosis affects many blood vessels, and stenting only the largest blockage may not make much difference in a patient's discomfort. Those who report feeling better may only be experiencing a placebo effect from the procedure.

"All cardiology guidelines should be revised," Dr. David L. Brown of Washington University School of Medicine and Dr. Rita F. Redberg of the University of California, San Francisco, wrote in an editorial published with the new study.

U.S. clinical guidelines say stenting is appropriate for patients with a blocked artery and chest pain who have tried optimal medical therapy, meaning medications like those given to the study patients. But those guidelines were based on studies in which patients simply said they felt better after having stents inserted.

"It was impressive how negative it was," Redberg said of the new study. Since the procedure carries some risks, including death, stents should be used only for people who are having heart attacks, she added.

Stents came into wide use in the 1990s and became the treatment of choice because they were less invasive than bypass surgery. But there have long been questions about their effectiveness.

A large, federally funded study with Maron as a co-principal investigator, which does not have an untreated control group, is now underway to determine whether medications can be just as effective as stenting or coronary bypass in preventing heart attacks.

In 2007, another large study led by Boden — also without an untreated control group — found stents did not prevent heart attacks or deaths from heart disease.

The explanation, researchers said, was that atherosclerosis is a diffuse disease. A few arteries might be blocked today, and then reopened with stents. But tomorrow a blockage might arise in another artery and cause a heart attack.

Relieving chest pain, though, seemed a different goal to many cardiologists. After all, the heart is a muscle, and if a muscle is starved for blood, it aches.

Many patients have coronary arteries that are 80 percent to 90 percent blocked. Surely opening those vessels should make the patients feel better.

The idea that stenting relieves chest pain is so ingrained that some experts said they expect most doctors will continue with stenting, reasoning that the new research is just one study.

Even Davies hesitated to say patients like those he tested should not get stents. "Some don't want drugs or can't take them," he said.

Stenting is so accepted that American cardiologists said they were amazed ethics boards agreed to a study with a sham control group.

But in the United Kingdom, said Davies, getting approval for the study was not so difficult. Neither was it difficult to find patients.

"There are many people who are open to research, and if you tell them you are exploring a question, people agree," he said. Nonetheless, it took him 3 1/2 years to find the subjects for his study.

Ethics boards at many U.S. hospitals probably would resist, since giving such patients fake procedures "flies in the face of guidelines," Boden said.

A few years ago, researchers — at the insistence of the Food and Drug Administration — did a study to test an invasive procedure to treat high blood pressure. The control group got a sham procedure.

The method was becoming popular in Europe, but the study found that blood pressure dropped just as much in those who had the fake treatment.

Dickert said he hoped the new stent study will show cardiologists that they need to do more studies with sham procedures.

"This may turn out to be an important moment," he said.

But getting them underway in the United States may not be easy. Ethics boards at hospitals and universities are likely to resist, as are patients.

"It's not just up to us," said Dr. David Goff, director of cardiovascular sciences at the National Heart, Lung and Blood Institute.

Still, the results of the new research have at least one heart specialist rethinking his practice.

Nallamothu got an advance look at the new paper on Tuesday. Coincidentally, he had a patient, Jim Stevens, 54, an attorney in Troy, Michigan, scheduled to receive a stent that day.

Stevens had a blocked artery, but the new report gave Nallamothu second thoughts. "I took him off the table," he said.

He explained to Stevens and his wife that he did not need a stent. "I was surprised," Stevens said. "But I feel better not needing it."